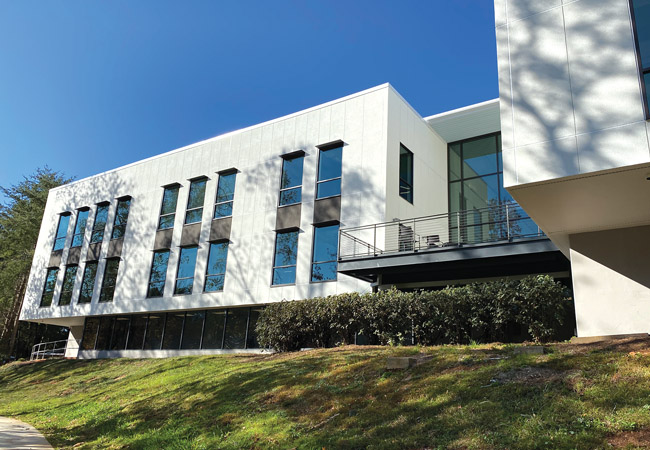 We knew the Integral team and architects were going to have to be on their A-game, because we had a very educated client,’ says Stanton Stafford, principal of Integral Group.

He is talking about the renovation of a 6,000m2 office building in Atlanta, Georgia, USA. The task was to turn this energy-consuming, 1970s building into a net zero energy, global headquarters fit for its client – ASHRAE, CIBSE’s transatlantic sister organisation. In addition to net zero energy consumption, ASHRAE wanted its new HQ to exceed the provisions of its own indoor air quality standards and to deliver a maximum demand-side energy use intensity (EUI) of 67.5kWh·m-2 per year (21.4kBtu·ft-2 per year), a figure consistent with the society’s Advanced Energy Design Guide for zero energy office buildings.

ASHRAE set a challenging construction budget of $8.57m (£6.3m) for the works and an even more challenging completion date of October 2020, 18 months after it purchased the building. ‘Our goal was to renovate this building to turn it into a high-performing, net zero-ready facility in a cost-effective method that can be replicated in industry,’ says Ginger Scoggins, chair of ASHRAE’s committee responsible for commissioning the new headquarters.

The building ASHRAE purchased was a typical out-of-town office, comprising two rectangular, three-storey blocks to the east and west of a glazed, barrel-vault atrium linking the two. A cast-in-situ concrete frame supports the building above a large basement, which includes plant space, and it was clad in alternate rows of precast concrete and glazing.

Stafford, the project’s mechanical engineer of record, says the design team’s approach to delivering a net zero energy solution was based on the following guiding principles: 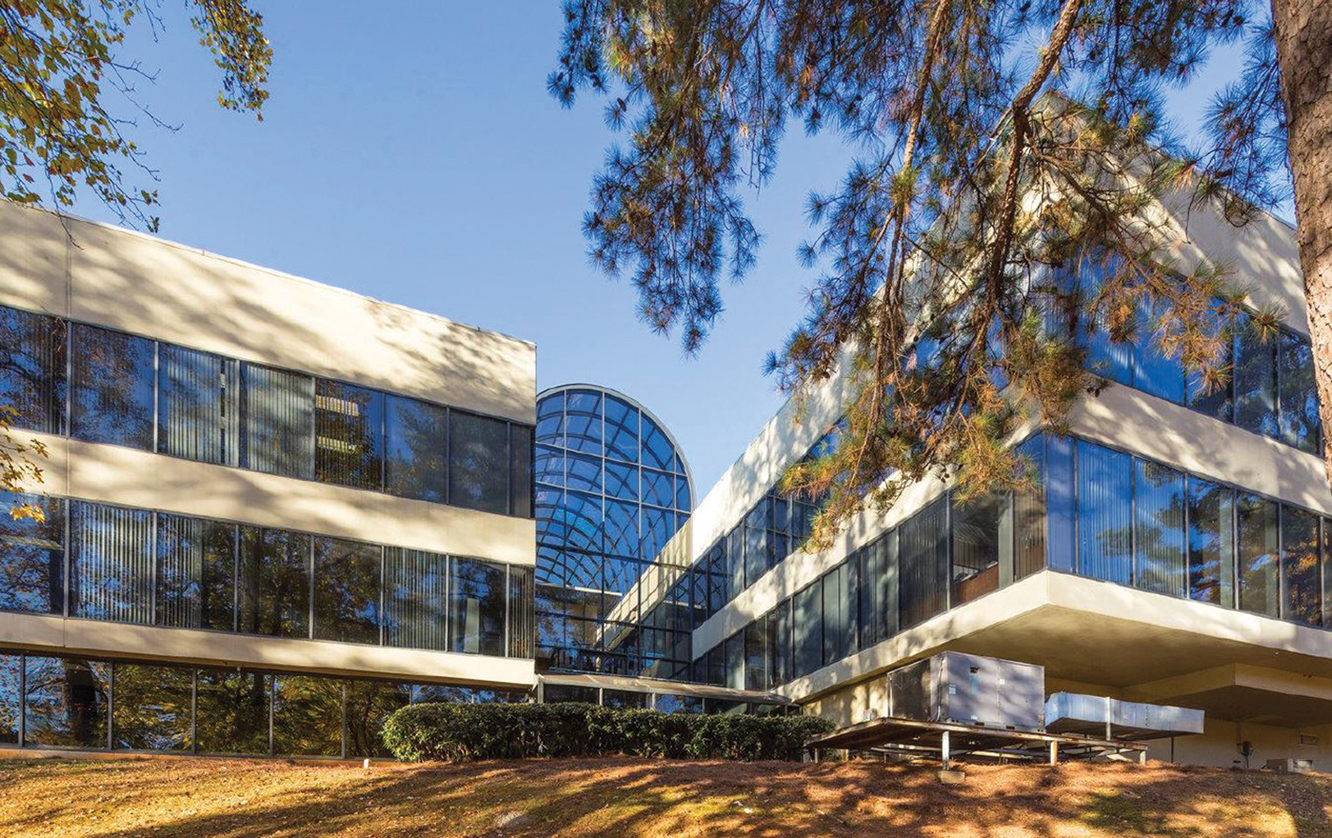 Left: The original glazed, barrel-vault atrium was replaced with a flat, opaque roof

ASHRAE wanted its design team to decide how best to allocate funds to upgrade the building’s envelope and to select the most energy efficient mechanical systems to service the building. ‘We tried really hard not to drive the train when it came to the design concept; we let the design team make recommendations to us on systems and equipment,’ says Scoggins. Stafford agrees: ‘ASHRAE was not prescriptive in how it wanted us to achieve these goals – it wanted the combined creativity of Integral, McLennan Design and Houser Walker Architecture to bring our ideas to the table.’

Before the team could table any potential solutions, however, it had to understand how the existing building envelope was performing, to decide how best to upgrade it.

Building surveys revealed the seals on many of the double-glazed units had failed, while a thermal analysis showed that energy was ‘seeping’ out of the building just below the roof, through thermal bridging and gaps in the façade. ‘When you poked your head above the ceiling, you could see holes in the façade,’ says Stafford.

The glazed, arched atrium roof was causing the space to overheat, turning the atrium into a greenhouse. It was replaced with a flat, opaque roof, which also increased the area available to mount solar panels

The extent of the energy seepage was revealed when the building was pressure tested. ‘The blower tests showed an air leakage equivalent to a 10m2 hole in the side of the building,’ explains Stafford. In addition, the building had a high window-to-wall ratio, which meant that solar gains were a potential issue in summer.

Armed with the survey data, the team undertook a sensitivity analysis to determine how to target the envelope upgrade. ‘We worked out what U-value reductions would give us the best value before we reached the point of diminishing returns,’ says Stafford. ‘You could pay for more insulation, but it would not net that much more benefit from a thermal point of view.’ 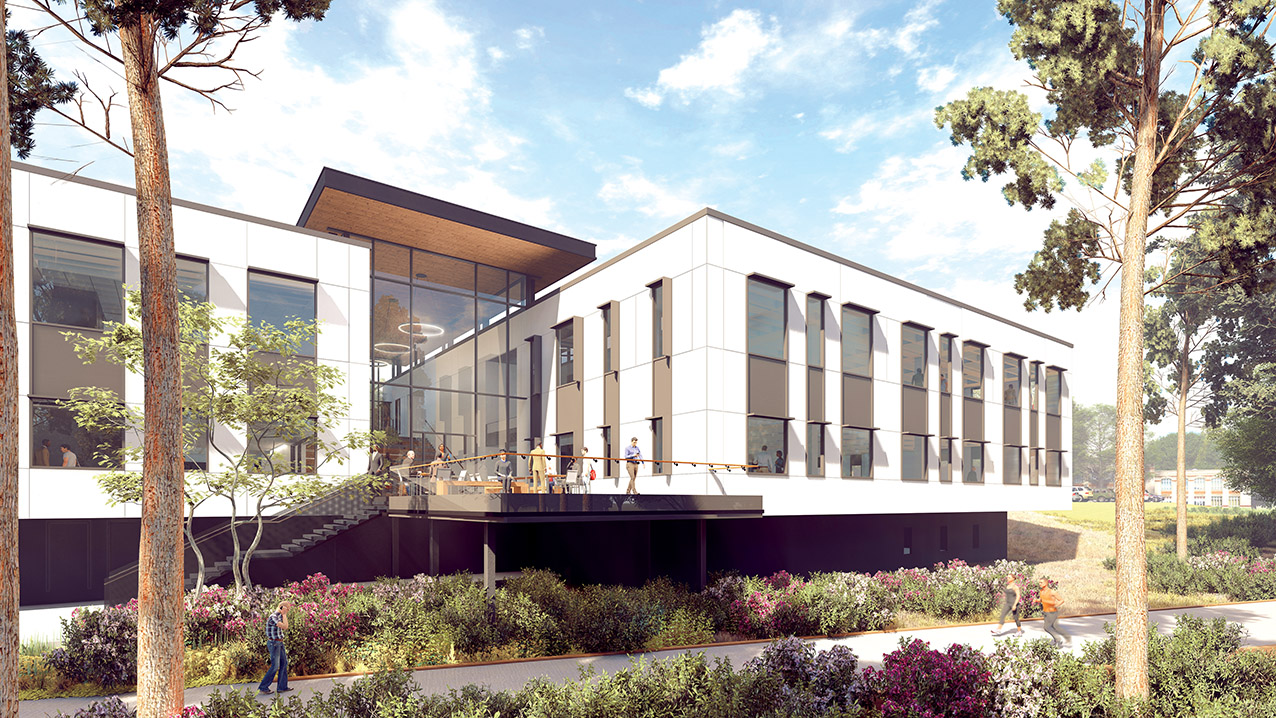 The building’s energy use was characterised to see where most energy was being used. The climate in Atlanta is cool winters – with a December to February minimum of -13oC – and warm, humid summers, with a May to September maximum of 37oC. The exercise showed that cooling used the most energy and solar gains were the biggest component of the cooling load, while Atlanta’s relatively benign winters and shoulder seasons meant that heat losses through the fabric were much less of an issue.

As the building’s orientation was fixed, the exercise highlighted the need to strike a balance with the envelope upgrade – between minimising solar gains in summer and harvesting solar heat in winter. Working with the architect, the team modelled various envelope modifications and daylight strategies, including changing the window-to-wall ratio and adding skylights over the circulation routes to allow natural light into the top-floor offices. The existing ribbon windows provided very little light to the building’s core.

The team also analysed whether a natural ventilation solution could be made to work by using the building’s inherent thermal mass and night-purge ventilation. However, the limited length of the shoulder season, high levels of tree pollen in Georgia, and additional expense of actuator-controlled opening windows meant this was unviable. 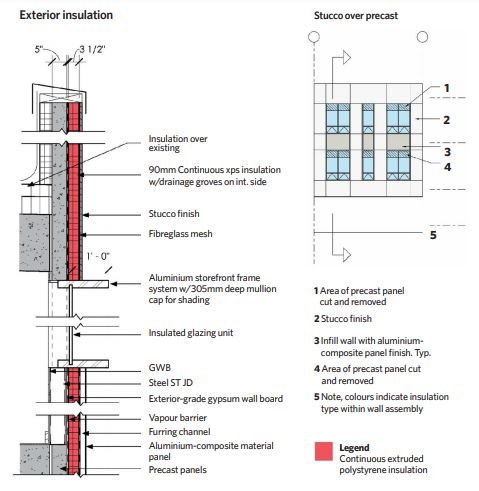 The envelope refurbishment also included new energy efficient glazing, an additional 300mm of shading, and 18 new skylights. Analysis showed the fabric improvements would transform the building’s EUI from 133 kWh.m-2 per year to 70 kWh.m-2 per year.

The glazed, arched atrium roof was a casualty of the analysis. Modelling showed it was causing the space to overheat, turning the atrium into a greenhouse. As a consequence, the arched element was replaced with a flat, opaque roof, which had the added advantage of helping increase the area available on which to mount solar panels. The exercise showed that the works needed to bring the building envelope up to scratch were far more extensive than had been anticipated and would cost significantly more.

Having used extensive modelling to optimise load-reduction modifications of the building envelope, the focus turned to the HVAC systems. ‘The passive design, climate, programme and envelope strategies got us pretty close to ASHRAE’s target EUI, so we needed to decide on a high-efficiency HVAC solution to provide comfort and flexibility to shift uses over time,’ says Stafford.

Experience of having completed more than 100 net zero energy schemes in various US climate zones was applied to whittle down the final choice of HVAC systems to two: an all-air solution and a hydronic solution incorporating radiant panels. ASHRAE’s requirements were to provide 30% more outside air to the building than the minimum ventilation rates required in ASHRAE Standard 62.1 – Ventilation for acceptable indoor air quality. As a consequence, both solutions incorporated a dedicated outdoor air system (DOAS) with enthalpy heat recovery and demand-controlled ventilation, to handle both the latent and sensible loads from conditioning the ventilation air. 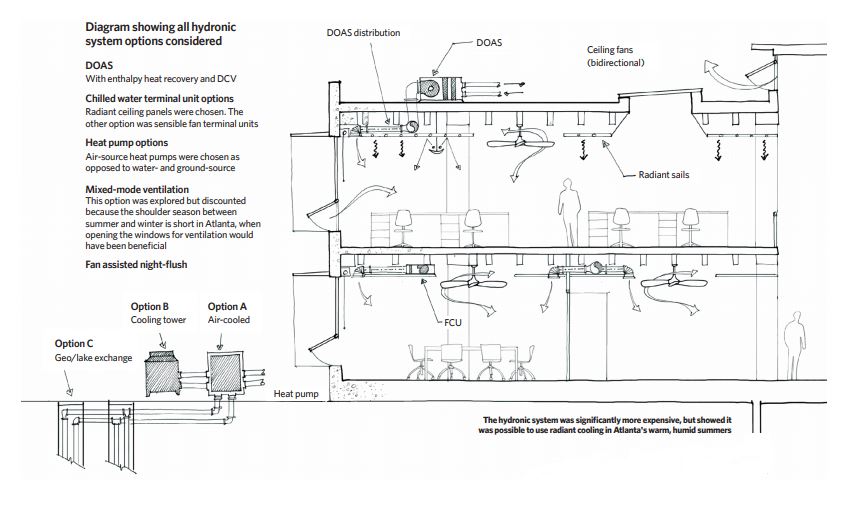 By contrast, the hydronic system combined the DOAS unit and the bi-directional, high-volume, low-speed, ceiling-mounted room fans with ceiling-mounted radiant panels. The radiant system is designed with perimeter panels that incorporate heating and cooling, and interior panels that are cooling only. The hydronic system is connected to a modular outdoor air source heat pump chiller with staged pumping.

The air delivered by the DOAS is supplied at a neutral temperature through fabric ducts running at high level in the spaces. ‘We’re depressing the dew-point temperature at the DOAS and then using modulating hot gas reheat to bump the air temperature back up to a neutral condition, so as not to overcool any space,’ says Stafford.

ASHRAE opted to go with the hydronic system because it was more energy efficient, had acoustic benefits, and would demonstrate that it was possible to use radiant cooling in Atlanta’s warm, humid summers. ‘This option was more expensive, but the team felt it pushed the envelope for Atlanta, the south-eastern US and, hopefully, hot, humid climates globally,’ adds Stafford.

Integral’s rationale in combining radiant ceiling panels with bi-directional, high-volume, low-speed, ceiling-mounted room fans was to create air movement in the space to keep occupants feeling comfortable while mixing the air to improve environmental comfort. The improved comfort created by the moving air also enabled an increase to the cooling set point, to reduce the demand for cooling.

In addition to the radiant system, the building incorporates a displacement ventilation system to promote improved air quality in the large conference and meeting rooms, and water source heat pumps for the partially below-grade basement storage spaces, to enable the air to be cooled and dehumidified.

The limited length of the shoulder season, high levels of tree pollen in Georgia, and additional expense of actuator-controlled opening windows meant a natural ventilation solution was unviable

The building opened in November 2020 and, now that it is occupied, its building services are being fine-tuned. It is a long way from being a net zero energy building, however, because the photovoltaic (PV) panels have yet to be installed. ‘You have to get your energy consumption down as low as possible, and then move forward with renewables to get you to net zero,’ says ASHRAE’s Scoggins.

Calculations showed that enough sunlight hits the site to enable PV panels to be used to meet the building’s forecast energy consumption. Even with the addition of the flat roof to the atrium, however, there was insufficient space on the roof to fit all the PV panels needed to deliver a net zero energy solution, so additional panels will be mounted on the ground adjacent to the building.

According to Scoggins, the building’s electricity supplier, Georgia Power, has a net metering limit of a 250kW (AC) export power to the local grid. ‘ASHRAE maximised the size of the PV system to meet the Georgia Power limit, to offset as much energy use as possible,’ she says.

Fortunately, the energy harvested by the PVs is calculated to be sufficient to offset the building’s EUI of 63kWh·m-2 per year (20kBtu·ft-2 per year). Design of the PV system is under way, with installation scheduled for March 2021, after which the building should be on target to achieve its net zero energy target.

ASHRAE’s new headquarters building is intended to function as a living laboratory to demonstrate how existing buildings can be renovated and upgraded to turn them into high-performing ones. ‘We are going to make this building transparent, so the world can see, online, how it is performing – so we needed to build a digital twin of it,’ says Charles E Gulledge III, ASHRAE President for 2020-21.

Creation of a digital twin aligns with Gulledge’s presidential theme of digital transformation and Industry 4.0. The headquarters building incorporates several digitally connected solutions, such as remote monitoring and analysis of building performance, with online dashboarding for transparency and integration of the building automation system with other systems, including the meeting reservations systems.

While the digital twin webpage has yet to be launched, the model is being used ‘to collect data and to mine it, to help understand the transient patterns to improve performance’, Gulledge explains.

The digital twin will feature on a large touchscreen installed in the building’s lobby. ‘It will have the thermal comfort on every floorplate, an environmental health index, energy meters and water meters to capture and display resource usage, and occupant comfort in real time,’ Gulledge says. Watch this space….