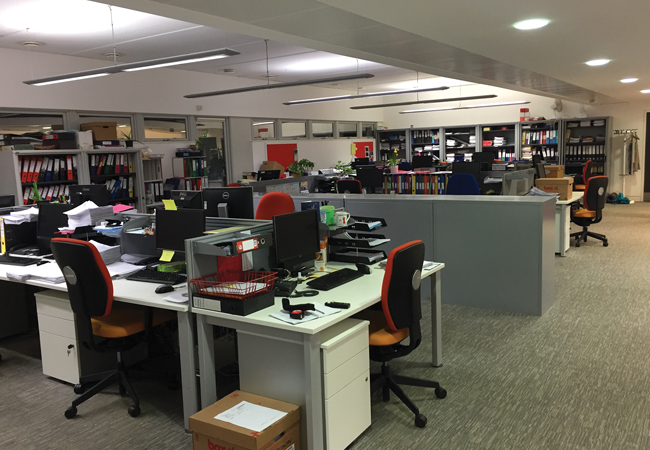 Circadian rhythms control our alertness and sleep, and the release of hormones (1). Daytime exposure to light, especially blue light, helps synchronise the circadian clock, enabling us to feel alert during the day and sleepy at night. Many people work in poorly daylit spaces, however, with relatively low levels of electric light, and it may be hard for their bodies to maintain their circadian rhythms.

Dynamic ‘circadian’ lighting (2,3) is being marketed using dimmable, colour-changing LEDs to give brighter, bluer light in the middle of the day, and dimmer light – with less blue – later in the day when it is time to relax. BRE carried out an experiment – funded by the BRE Trust and CIBSE Research Fund – to investigate the effects of dynamic lighting and its timing on human subjective assessments, activity and reported sleep. 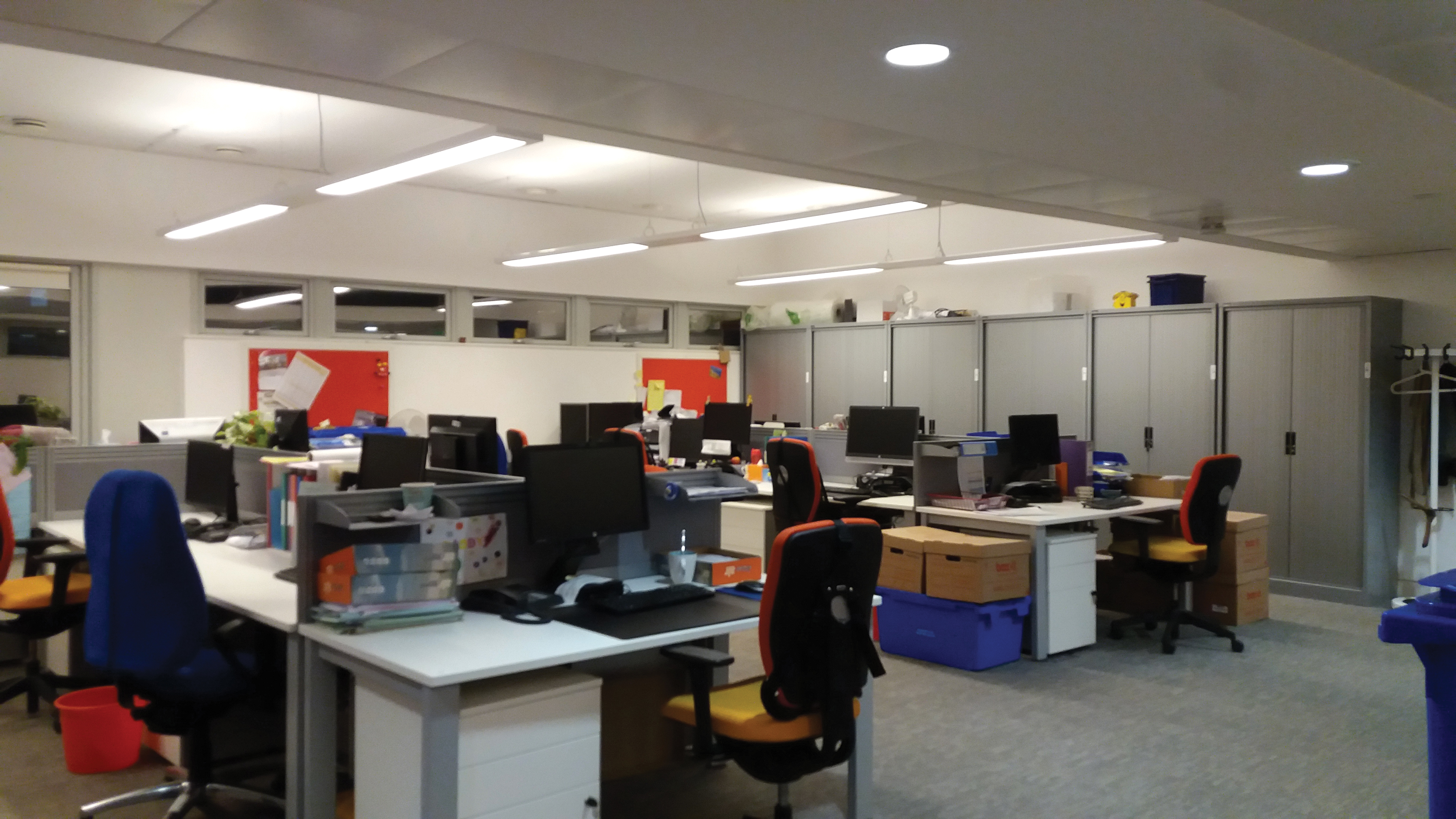 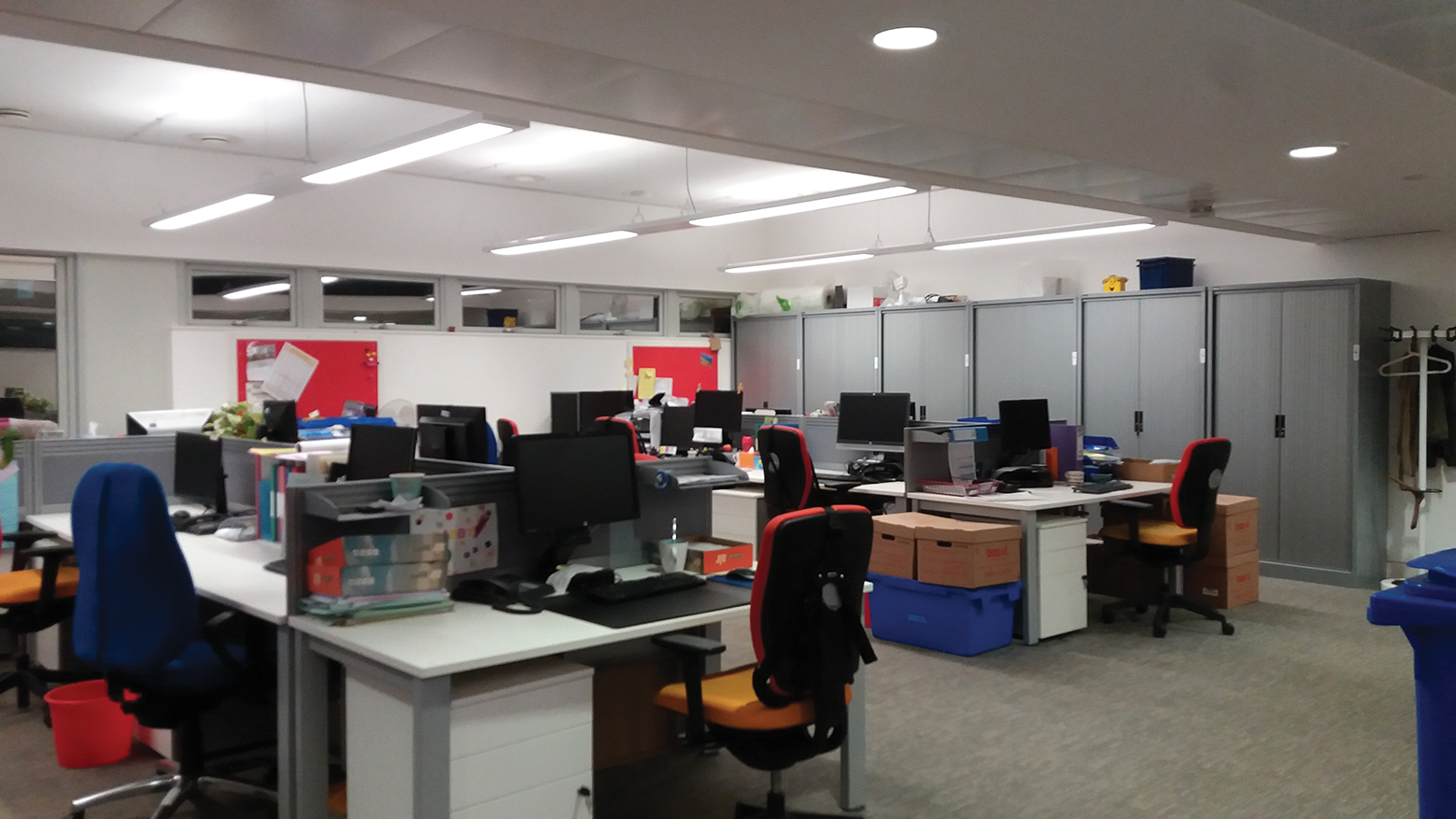 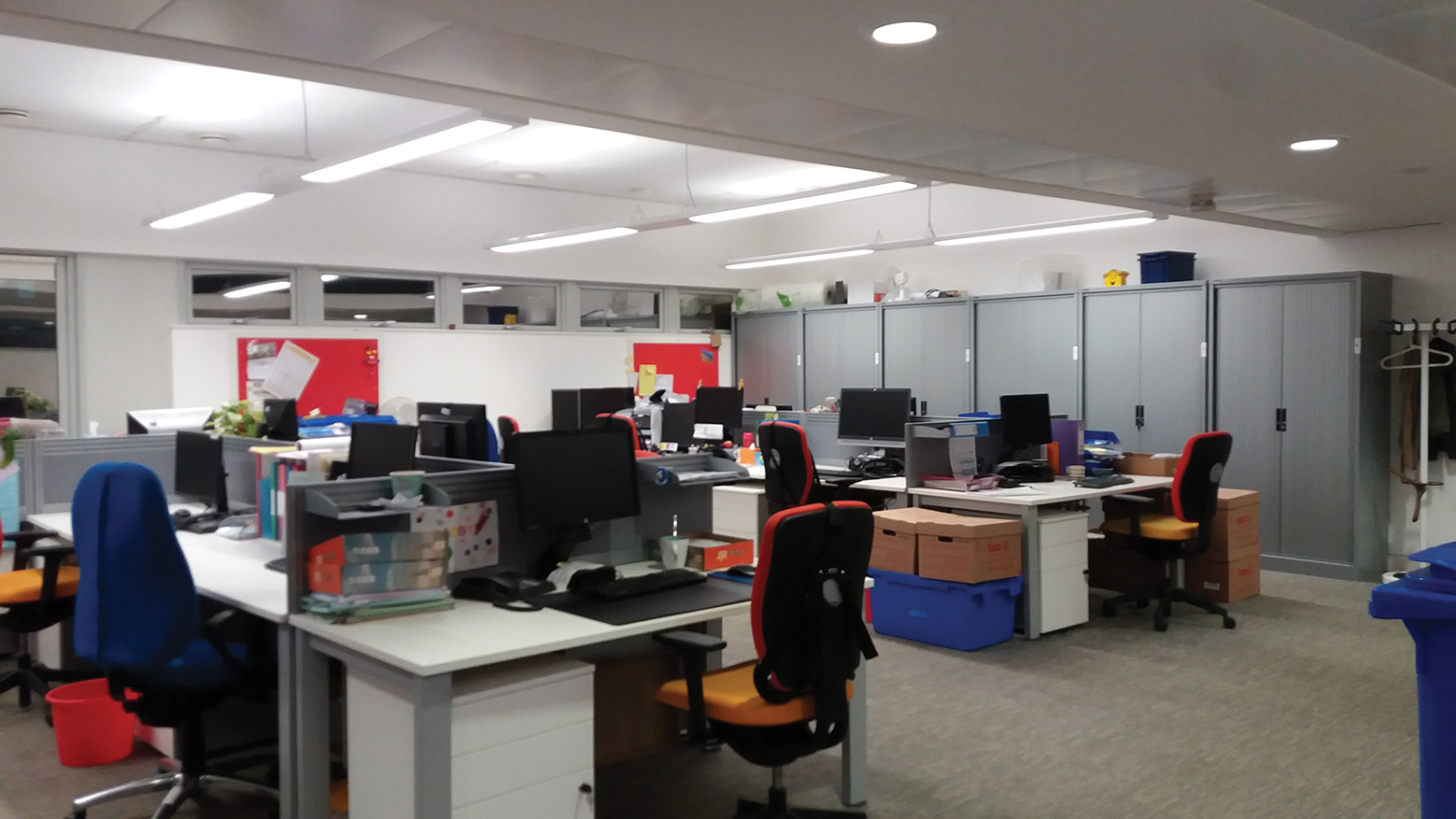 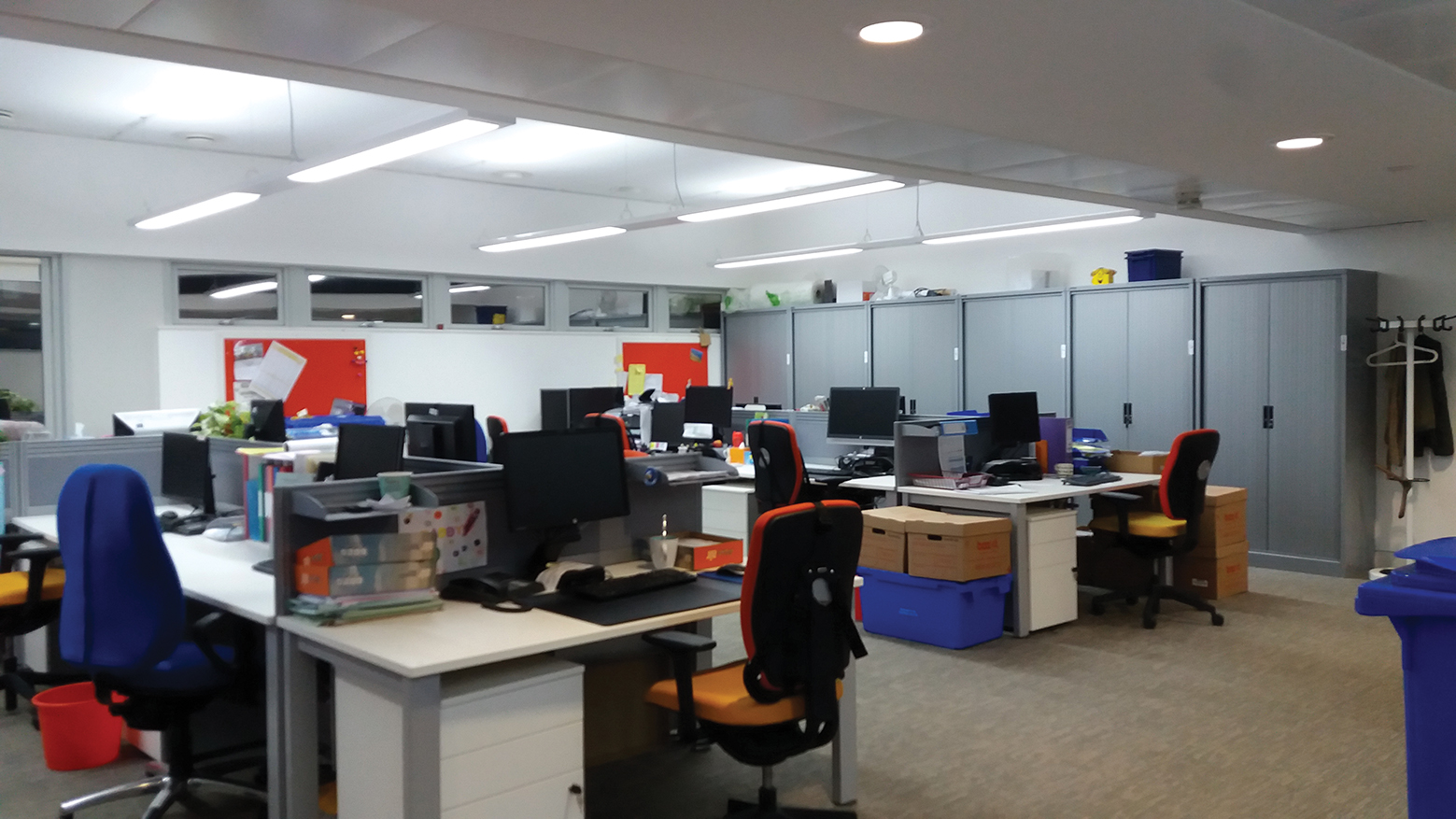 The experiment took place in an open-plan office in Norwich, UK. There was very little daylight, and the windows were small and heavily obstructed by overhangs and nearby buildings. Of the 36 people who worked in the space, 23 (19 women and four men) opted into the experiment. Initially, in February 2018, the space had constant fluorescent lighting (Figure 1, Condition 1).

Most of the lighting was 4,000K (white), but some luminaires had 3,000K (warm white) replacement lamps. Some of the tubes had been removed when the occupants complained that the lighting was too bright, so the lighting was non-uniform. The mean horizontal illuminance was 377lux – in line with the 300lux recommendation for computer users in offices – but desk illuminances ranged from 129lux to 1,017lux. 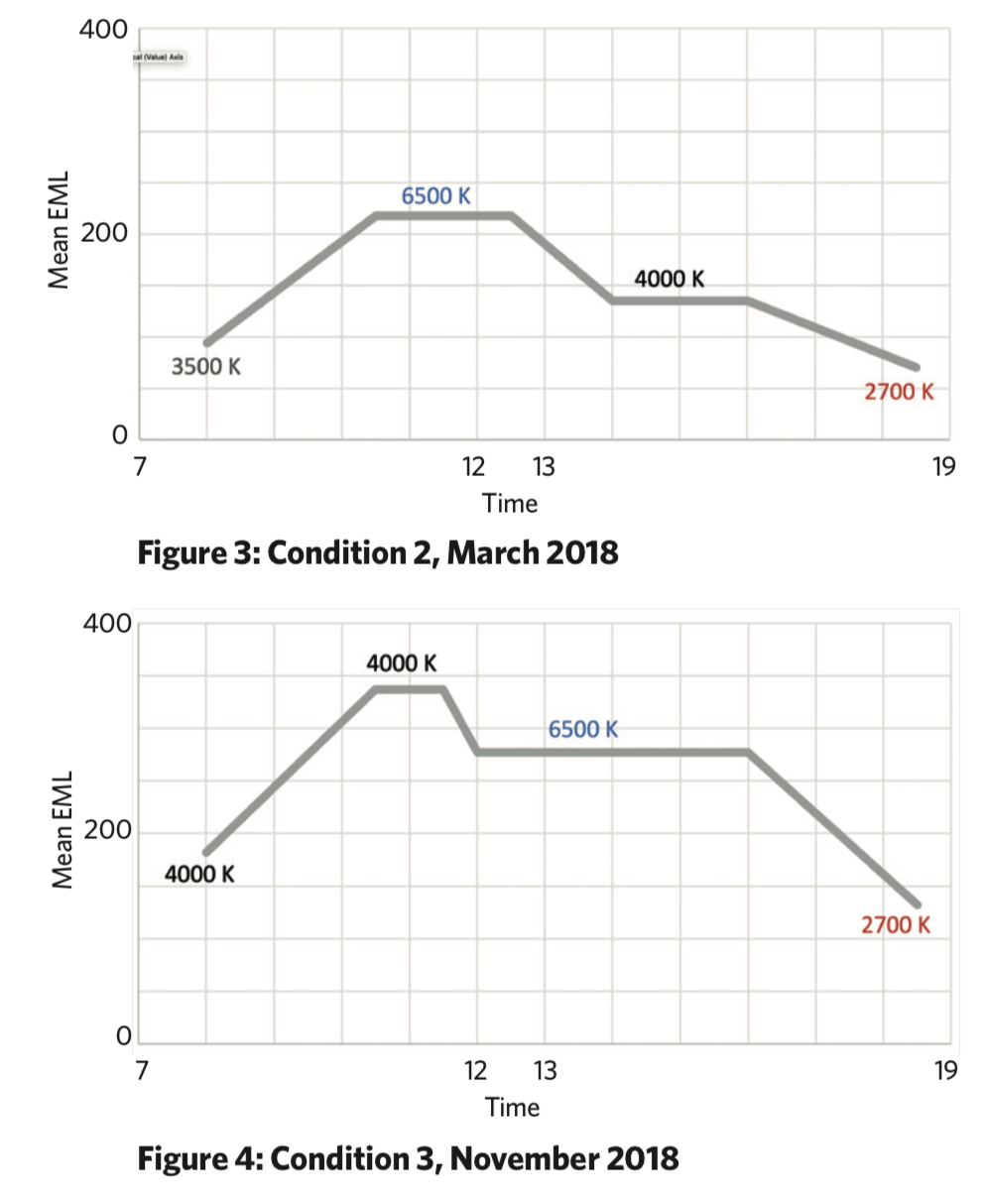 Figure 3 shows how the LED lighting changed with time of day. In the early morning, it became brighter and bluer until, at 10:30, it was at its coolest setting (6,500K colour temperature). From 12:30 onwards, the colour started to change again to become a standard white from 14:00.

At 16:00, it started to become dimmer and redder, with 2,700K colour (similar to domestic lighting) by 18:30. The y-axis is scaled in a quantity called equivalent melanopic lux (EML). This measures the light entering people’s eyes, weighted by the spectral response of the special cells in the retina (ipRGCs) that influence circadian rhythms.

These cells are particularly sensitive to blue light. For comparison, the fluorescent lighting had a mean EML of 101, though this varied a lot over the space. The Well Building Standard v2 (5) recommends at least 150 EML in a non-daylit space and, for maximum credits, 240.

Most of the variation in EML over the day was because of the change in colour of the LED lighting. Visual illuminances did not vary as much, with mean horizontal illuminances ranging from just over 350lux at the start and end of the day, to 488lux in late morning. The aim was to give an appropriate level of light to work by at all times.

Additional variable lighting conditions were administered in the second phase of the project, in November and December 2018, when 20 participants took part. For the first two weeks of monitoring (Condition 3), the LED lighting was programmed to change dynamically (see Figure 4) in a different way, with higher EML values.

Mean horizontal illuminances varied from around 600lux at the start of the day to 1,120lux in late morning and 670lux at the end of the day.

Once the monitoring for Condition 3 was over, the LED lighting was set (Condition 4) to a constant light output and colour (4,000K) to replicate typical office lighting (mean horizontal illuminance 480lux, mean EML 149), and monitored for two weeks.

Participants gave subjective assessments of the space after each condition, and responses in the morning and afternoon, on two days a week, to assess their subjective alertness, reaction time and concentration.

There were also no statistically significant correlations between increases in circadian-weighted lighting (more EML) and variations in subjective alertness between the two conditions tested in each phase of the project.

Participants also did computer tests to assess their reaction time and concentration. There were no statistically significant differences in either between the two conditions tested in each phase of the project. Around half of the participants wore an Actiwatch device to monitor their activity and sleep patterns; there were negligible differences in sleep under the first two conditions.

On average, just more than half of the participants preferred dynamic lighting for their office, typically brighter in the morning and following the variation of natural light outdoors. Around one-third preferred the constant lighting. 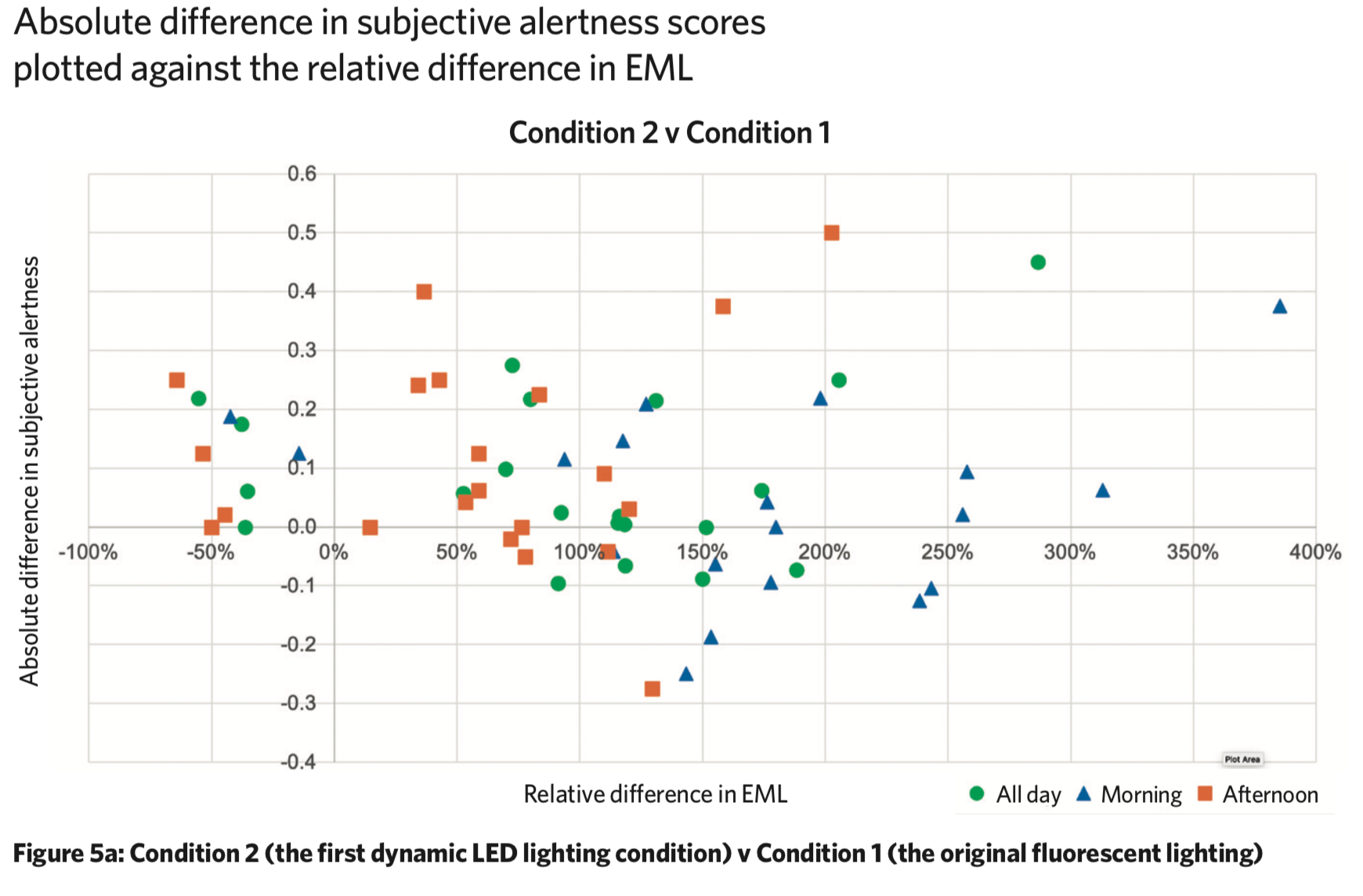 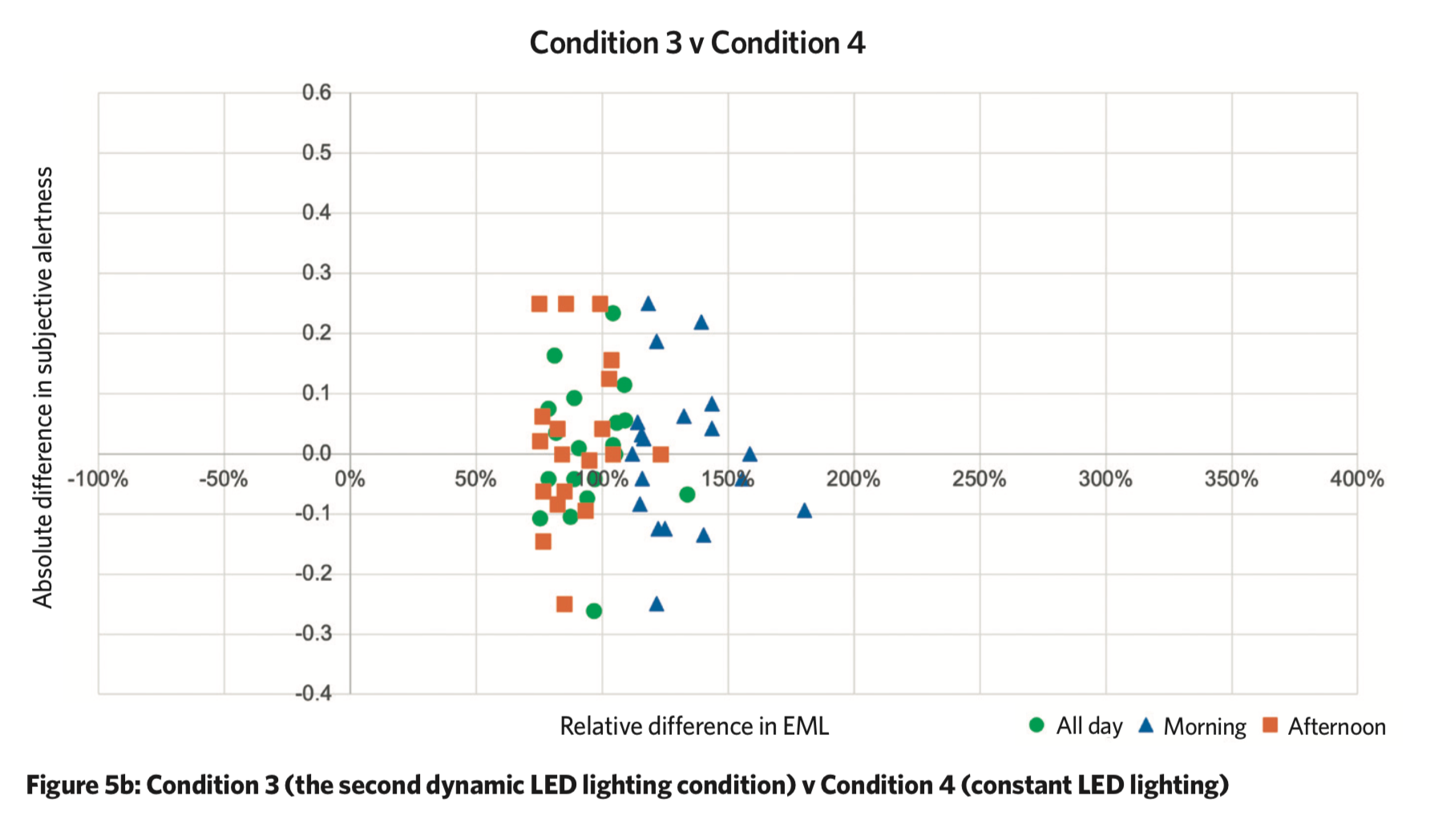 People felt more alert under the new lighting system, but there appeared to be no correlation with how much light they received or the way in which the system was operated. This contrasts with results from other studies, although these mainly used high illuminances or very blue light.

There could be various explanations for this. The experiment (3,4) had a relatively small sample size. People vary in their reactions to light and to their normal exposure to light; 18 of the 23 initial participants took at least one break to go out of the building during the day, so they would have been exposed to daylight then. Nevertheless, there were some valuable findings:

Light levels vary across a space. The new LED lighting appeared more uniform and all the lamps were working, but there were still big differences in the amount of light reaching different people’s eyes. Under the 6,500K (late morning) setting, EML values ranged from 142 to 413. In multi-occupant spaces with conventional ceiling lighting, it is very difficult to achieve a standard ‘dose’ of light for everyone. If people are facing the walls, or near a walkway, less light will reach their eyes than people with their backs to the wall facing a brightly lit space.

A balanced visual environment is important. For Conditions 1 and 2, the occupants had white desks and complained about light being reflected from them. To avoid unwanted glare in Conditions 3 and 4, they were replaced in the summer with desks in a light-oak finish, which allowed higher illuminances to be used.

Overall, the participants preferred the dynamic lighting, and elected to keep it at the end of the study. 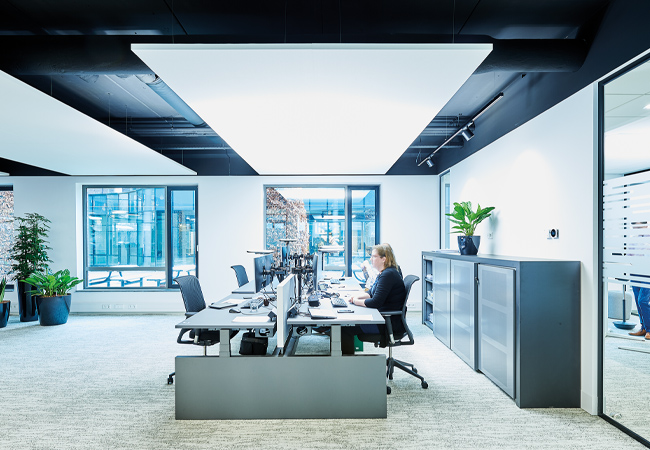 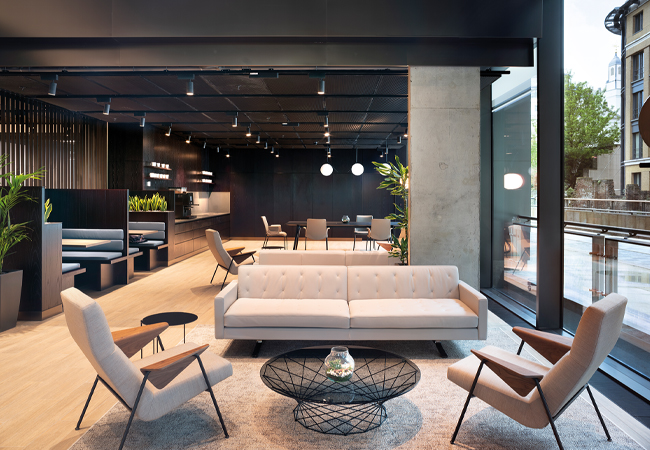 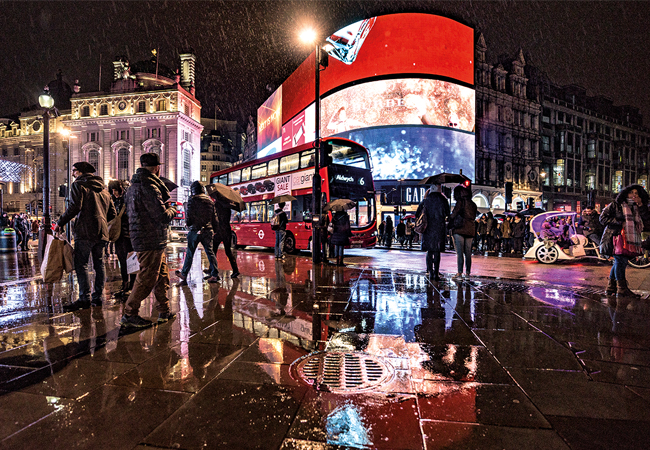