Schneider Electric promotes itself as a company leading the digital transformation of energy management and automation. So when it set out to construct two buildings at its site in Grenoble, France, it wanted them to achieve new standards for digital construction and low energy in operation – and, of course, to be a technological showcase for its products.

The buildings, which will accommodate more than 2,000 employees, are being constructed sequentially. Building one, TPôle, was completed last year and has a floor area of 12,000m2.

‘We decided TPôle would be a flagship building in terms of energy performance that would also achieve the highest levels of user comfort through having a smart user interface,’ says Bertrand Lack, director of strategy and innovation for the building division at Schneider Electric.

Lessons learned from the design, construction and operation of TPôle will be used to inform the design and construction of the second building, the 28,000m2 XPôle. TPôle has achieved 80 Leed points (under Leed Version 3) putting it on target for Leed Platinum status, the highest level for energy-efficient design.

Schneider Electric’s goal for XPôle is for it to be the first building to exceed 100 Leed points, with a target of 102 under the more challenging Leed Version 4, for which 110 points is the maximum score possible.

Built in BIM as designed

Although the design was developed in BIM, there were concerns that changes made on site while the building was being constructed meant that the final installation was no longer accurately represented by the BIM model. ‘Adjustments made on site were not reflected in the digital model,’ says Lack, who said the issue occurred mainly because the contractor was unfamiliar with the use of BIM in the operation of a completed building.

Lack says that the BIM model had to be updated after completion to take on board the changes made during the construction process.

‘The reality is that construction and operations worlds often ignore each other; this is a barrier Schneider had to work hard to counteract to ensure the BIM model accurately reflected the physical asset as its “digital twin”.

In fact, Schneider wanted to use the 3D BIM visualisation model in conjunction with its building management systems to drive the operation of the building. ‘We see a great advantage in connecting the database of static data in the BIM model to the dynamic building automation systems,’ says Lack.

When the project was first mooted five years ago, it proved extremely challenging to acquire sufficient information from the BIM model for use in building management and automation systems, to enable facilities managers to interrogate and operate a building in real time. ‘There is a real gap between the BIM used in the design stage and the BIM used in operations,‘ says Lack. 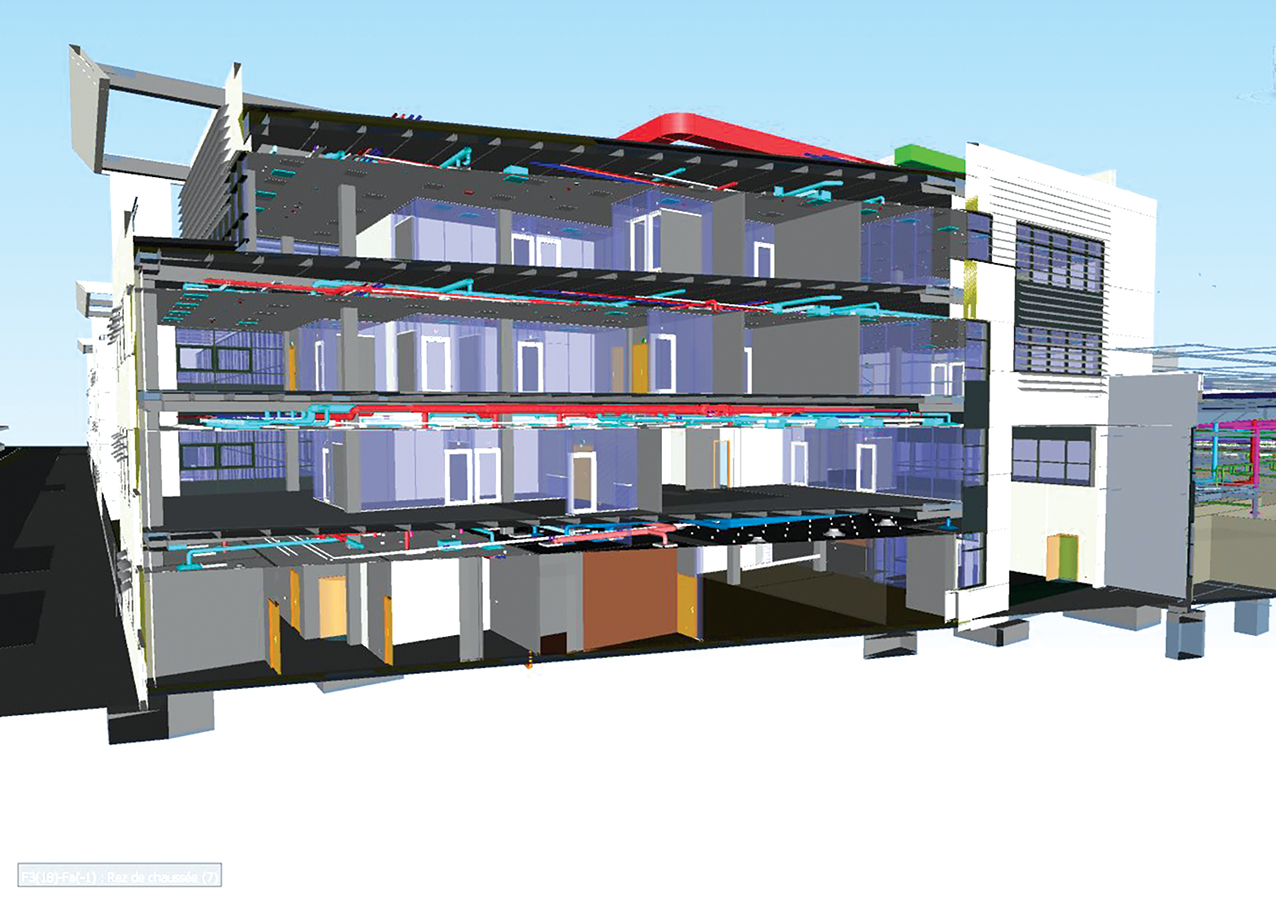 For this project, Schneider worked with Autodesk under a memorandum of understanding, to develop the BIM model so it would better connect to its building-automation software. As part of that agreement, the facilities management stage of the project is now being intensively researched by both parties.

The project team of general contractor GA and engineering consultant Artelia developed the design for TPôle in BIM.

‘As a digital building management solution provider, we wanted to experience the design process in real life,’ says Lack. ‘We wanted to find out whether all the promises we had heard at various BIM conferences were true – that using it would enable the project team to save on costs during design and construction through improved collaboration, better coordination, planning and scheduling.’

One of the challenges of using BIM is that information from the Revit work environment has to be exported into specialist software packages for each discipline – such as architecture, structural engineering, HVAC and electrical engineering – where these elements of the design can be developed. ‘We had seven BIM models,’ says Lack.

A difficult task on the project was getting the different software platforms to talk to each other. Industry Foundation Classes (IFCs) offer a global standard for
construction elements that allow them to be described, shared and exchanged between software applications while maintaining a specific meaning.

‘As soon as you go out of one platform you face issues of data formatting,’ says Lack. ‘We faced some difficulties – which is normal for a state-of-the-art application – but we wanted to understand the issues.’

The BIM model was also used for thermal modelling. Dynamic thermal analysis of the building was done by EQUA, using its IDA ICE product, once the Revit model had been exported to IFC format. ‘We created an energy model based on performance of the building fabric to assess the passive behaviour of the building,’ says Lack.

One of the company’s objectives with the project was to see how the as-built model could be used to operate a smart building. The plan was to map occupation, space management and alarm systems onto the BIM model, and create the building’s digital twin. To this end, the actual building has been flooded with sensors.

‘In addition to the active energy-efficiency solutions contributing to the optimal operation of the building and the achievement of our energy goal, this building is over-instrumented to collect as much data as possible. This enables it to work as a tool for future research and innovation actions, energy-efficiency algorithms and analytics technologies,’ Lack explains. 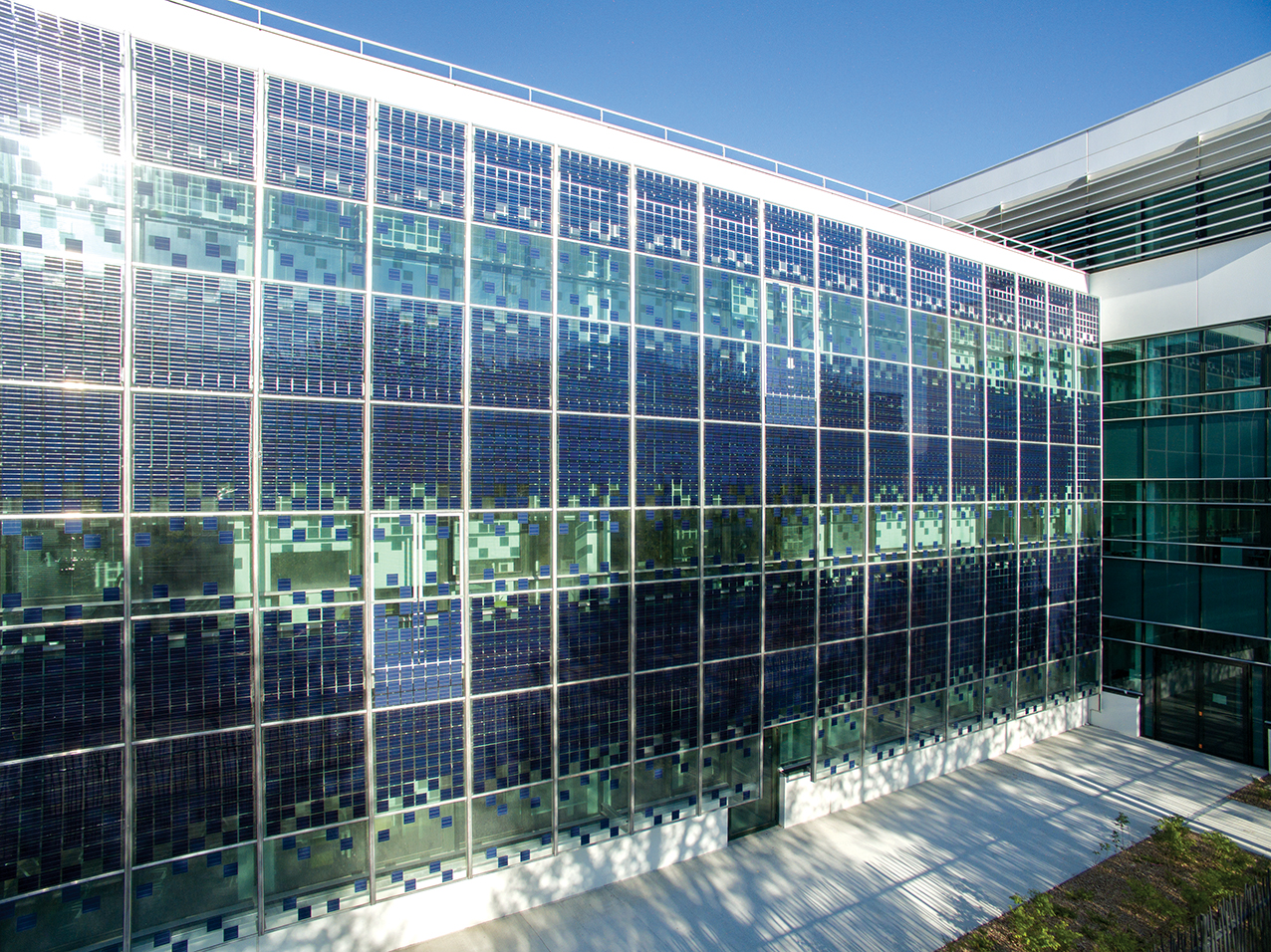 Lessons learned from TPôle will be used to inform the design of the second building, the 28,000m2 XPôle, which is looking to exceed 100 Leed points

As might be expected, TPôle is a showcase for Schneider’s BMS know-how. As such, it incorporates many of the company’s technologies, including EcoStruxure for Buildings – its architecture and building-specific platform for mass deployment of Internet of Things (IoT) solutions.

‘As part of the IoT aspect of the project, we have mapped some of the sensors – such as presence detectors and those for temperature – onto the BIM model,’ says Lack, who believes this implementation shows the value of putting the data into the building context: ‘If I say it is 25°C in office 64, that does not mean much – but if I show you, on the model, that its 25°C in the office in the south-east area of the ground floor of the building, that is far more useful to a facilities manager.’

Integrating the IoT will give more flexibility of control over the building’s temperature, lighting, air quality and even power usage. In addition, by collecting dynamic data from the building and coupling this with data from the static modelling, Schneider hopes to develop new functionalities and services for space-management operation, energy, maintenance, operations, and information on the occupants.

This connection of the static and dynamic data also allows the building to be visited virtually, in augmented reality.

As a result of the extensive IoT architecture, equipment in the building can be controlled based on multiple criteria. TPôle is smart-grid ready – that is to say the technical installations, associated with the EcoStruxure system, can be energy flexible by shifting consumption times.

The system will, for example, make it possible to optimise the cost of energy by using dynamic pricing and load shedding – or through demand-response operations, whereby the building is taken off-grid at times of peak electricity demand. The system could even be used to optimise the building’s carbon contribution.

‘This flexibility will allow the consumption of energy to be shifted to times when energy is cheapest, which will help to lower our energy bill,’ Lack says.

The BIM model being used by the facilities manager to operate the building requires far more detailed information than the IoT model needed by the building’s users. ‘The project has taught us how best to specify the BIM model, because the model required by the user is different from the one used by the FM,’ says Lack.

Candidly, he adds that it has been difficult to see the benefits of BIM for the construction phase of the TPôle project, because five years ago – when the project started – the contractors were not fully BIM conversant. 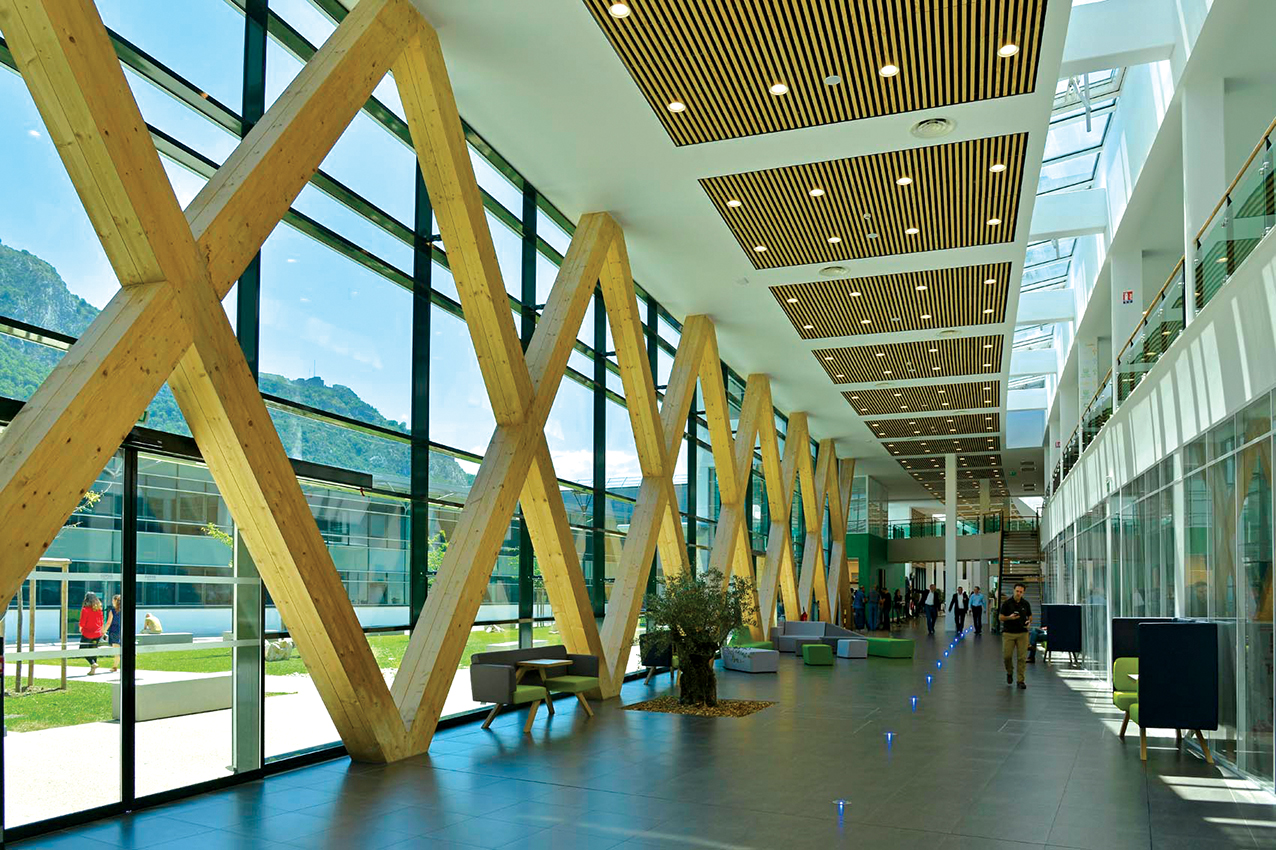 It was also a steep learning curve for all those involved: ‘You cannot expect savings when you do your first BIM project,‘ says Lack. However, he believes the situation should improve now that ISO standard 19650 defines information management within a BIM design and construction environment.

Now that the TPôle building has been completed, Schneider is studying it in operation, to understand better the algorithms and features needed to optimise its energy consumption.

‘With this dynamic model, we have the capacity to track the actual behaviour of the building and to compare it with the virtual building, to see if implementing different control scenarios can improve performance.

But will it reach the target of 45kWh·m-2·per year? ‘It’s still too early to tell, because we need at least a year’s operation to validate the model to see if it is good,’ says Lack.

Information from the operation of TPôle will inform construction and operation of the second building, work on which is already under way. The aim is for it to have an annual energy consumption of just 37kWh·m-2·per year, roughly a quarter of the office average energy consumption in Europe – not bad for a building in a city such as Grenoble, where the average temperature in January can dip below freezing.

Why operational technology is key

To create an operational building model that can be accessed by facilities managers (FMs), another layer of technology must be incorporated in services designs, says Stacy Van Dolah-Evans, global account director at Schneider Electric, who spoke about the Grenoble project at CIBSE’s Build2Perform Live event in November.

The architecture allowing FMs to interrogate building asset performance in real time is known as operational technology. ‘We can’t get all the building information we need out of the existing IT architecture; we need more information and datasets,’ says Dolah-Evans.

He adds that services designers need to diversify and increase their skills and knowledge in this area. ‘The industry has experts in different disciplines, but they don’t converge very often. That is a real problem, because most technologies converge all the time.

‘Mechanical engineers often don’t have knowledge of electrical engineering, so aren’t able to integrate controls that would enable data from M&E assets to be accessed.

‘Our industry needs to break down the silos; this will allow the changes to happen in how we approach building design.’