The coronavirus pandemic has disrupted normal life in many ways. For millions of Londoners, perhaps the biggest upheaval has been switching from the daily office commute to working from home. Surprisingly, many workers are finding they are happier, healthier and less stressed as homeworkers and – according to letting agent Savills – when the pandemic ends, many expect to continue working from home for up to three days a week.

This partial shift to homeworking – coupled with an expected decrease in headcount in organisations, in response to the economic downturn – means office occupation in central London is not expected to return to pre-Covid levels. This could result in swathes of empty office space in the city centre, and dealing with it will be a big challenge for many landlords. So, what could be done?

One pre-Covid example of how floorspace in a conventional office can be repurposed for academia is demonstrated by One Bartholomew. This 11-storey, 21,000m2 office building, with Cat A fit-out, opened in December 2018 as part of developer Helical’s Barts Square development. Earlier this year, the lower floors of this prime City of London office were transformed into a 4,000m2 academic campus for the University of Chicago Booth School of Business’s Executive MBA programme.

‘The office’s prime location, with its views of St Paul’s Cathedral, made it an attractive European home for the Chicago Booth School of Business,’ says Giovanni Festa, building services operations director at Sweco, the consultant responsible for the fit-out of the campus. He says the building was also appealing from a building services perspective, because its first and second floors had been designed as ‘loose-fit, flexible, boutique trading floors’ with an enhanced fresh-air supply (based on one occupant per 6m2 of floor area) and increased small-power provision compared with the more conventional servicing of the upper floors. At BCO 2019 conditions with 1:8m2 occupancy, outdoor air would be 1.65 L·s-1·m-2, so 2.2 L·s-1·m-2 is a ~33% increase. 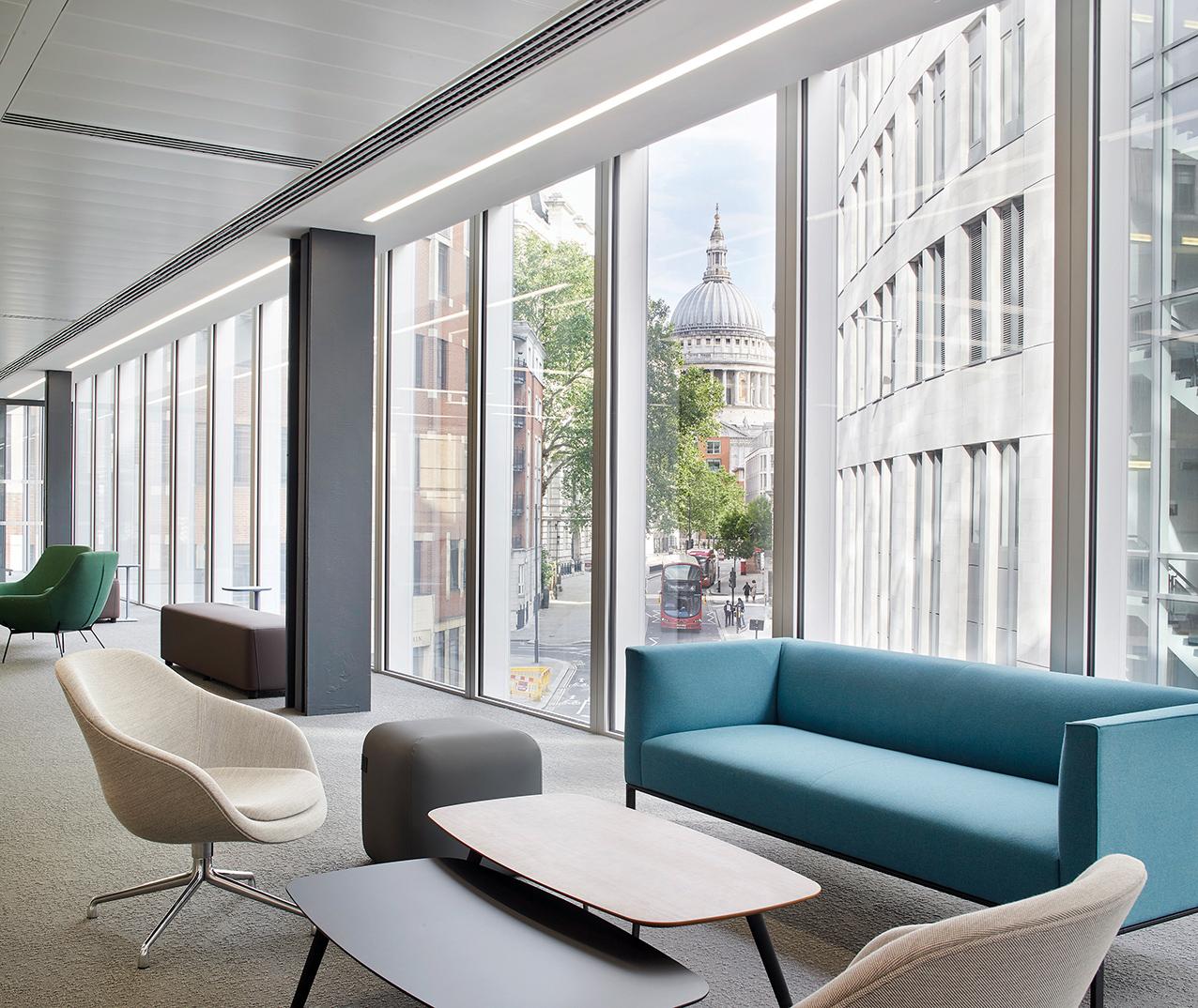 The interior of Chicago Booth School of Business

The university has also leased a large, empty, self-contained retail unit on the building’s ground floor, which has its own entrance off Bartholomew Square. Architect Sheppard Robson’s fit-out scheme for the business school’s campus involved punching a hole through the first- and second-floor slabs to enable a new stairway to be inserted, connecting the ground-floor entrance to the first and second floors.

The university’s eating area and multi-purpose function space have been located on the ground floor. On the first floor is a large lecture theatre, with tiered seating for 120 people, and numerous six-person cellular meeting/tutorial rooms. The second floor is home to a smaller 70-seat lecture theatre, plus meeting rooms and administration offices.

When it came to developing the building services design, Sweco was fortunate in that it was the engineer responsible for the office building’s original base-build services design and Cat A fit-out. Its scheme incorporated two vertical service risers to enable the landlord to subdivide each office floor at the lift core. Under the Cat A scheme, fresh air was ducted from the riser to a series of fan coil units (FCUs) serving perimeter and large internal zones in line with BCO recommendations, located above the false ceiling.

The enhanced specification of the original scheme ensured the total quantity of fresh air supplied was sufficient for the university’s total occupancy. The challenge for Sweco, says Festa, was to ensure sufficient fresh air supply to the lecture theatres and the clusters of occupants in the cellular offices. For the lecture theatres, Sweco’s solution was to tap directly into the fresh air riser to take the entire fresh air allocation for that half of the floor plate. 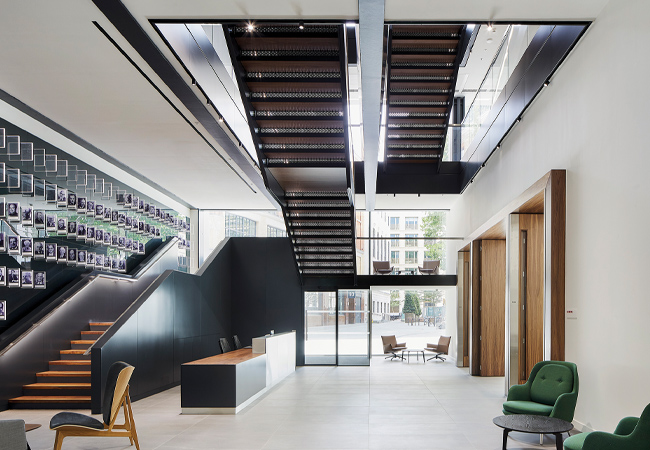 There is sufficient fresh air for the two supply risers to serve the whole floor; broadly one serves the auditorium and the other serves the open plan area and meeting room/offices. The fresh air is pulled into a new recirculating air handling unit (AHU) installed in a service room created adjacent to the auditorium. Festa describes the AHU as ‘a massive fan coil unit’ – the AHUs are operating with a secondary volume of 1,300 L·s-1 and 2,100 L·s-1.

The AHU mixes the fresh air with a proportion of recirculated air, before supplying it to the auditorium through the raised floor. The fresh air component from the auditorium returns to the open-plan ceiling void via attenuators at high level, from there it’s extracted by the base-build return air bellmouths and up to the AHUs at the roof.

The remainder of the floor, including the cellular spaces, is supplied with fresh air ducted from the second riser. ‘If we hadn’t had the additional fresh air allowance, we would have had to use the CO2 control on the VAV [variable air volume] system serving the remainder of the floor plates to shut down the fresh air supply to areas with less occupancy, so we could move the air to where the people are clustered,’ Festa explains.

When it came to fit-out of the remainder of the floors, Festa says the large number of cellular, six-person meeting rooms ‘caused some difficulties’. This was mainly because the room enclosures had been designed to pass through the suspended ceiling void to the underside of the soffit, to minimise noise transmission between spaces.

To accommodate these, the suspended ceiling and services installed under the Cat A fit-out had to be removed, and the ductwork and sprinkler services replaced. ‘The removed ceiling was not dumped in a skip,’ says Festa, ‘It’s a really good sustainability story, because probably two-thirds of the ceiling – including tiles, light fittings and diffusers – was reused.’

Each meeting room now incorporates a small, dedicated, two-pipe FC, with cooling capacities of <1kW. ‘The infrastructure was all there, but it had to be significantly adapted, which was why the ceiling had to come down,’ says Festa.

In contrast to the Cat A fit-out of the first and second floors, the ground-floor retail unit was an empty shell. ‘We did put an additional AHU on the ground floor, and then extended the primary heating and cooling pipework down to the shell to make it part of the bigger campus,’ says Festa. Fresh air is drawn in through a new louvre fitted into what Festa terms a ‘soft spot’ – an element that can be removed – in the façade.

‘What made this building relatively easy to adapt was the increased fresh air allowance and small power loads, combined with a floor-to-ceiling height that enabled the auditoria to be accommodated on a standard floor plate,’  he adds. Although more fresh air means bigger plant, the enhanced provision was only for selected floors so, at a whole building scale, the change isn’t too radical, he says.

Another example of a conventional office being transformed into an academic campus is to be found in East London. Here, Anglia Ruskin University has occupied two floors of the Import Building, part of the Republic office campus in East India Dock.

The development started life as disaster-recovery space for businesses at nearby Canary Wharf. It has subsequently been renovated and rebranded as an office campus and creative hub after the site’s acquisition by LaSalle investment management in 2016. Last year, Anglia Ruskin University London (ARU London) leased the third floor of the Import Building as an extension to its London campus. 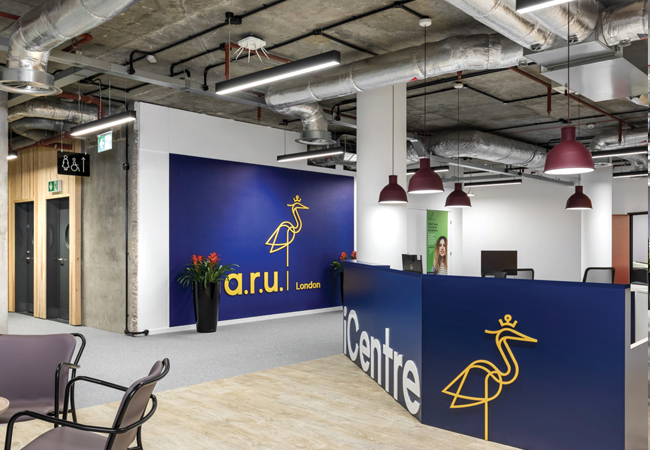 The floor already had a Cat A fit-out, but this was based on a total occupancy of 300 or so, whereas ARU London wanted to install a series of 60-seat lecture theatres around the floor’s perimeter, taking the total occupancy up to 800. ‘We needed to find a way to adapt the services for almost triple the occupancy,’ says Richard Beer, executive engineer at Sweco, the consultant responsible for adapting the scheme for ARU London. The contractor on the project was Oktra.

Sweco’s solution was to take out several windows and replace them with louvres similar to those on the adjacent buildings. It then installed two additional on-floor AHUs to meet the increased fresh air demand.

After the success of the third-floor scheme, ARU London also leased the fourth floor, taking its total occupancy to 2,000 students. A new staircase was installed to provide a dedicated link between the floors. The fourth floor also features a row of lecture theatres positioned around its perimeter, and these are accessed from what Beer terms a ‘generous corridor’, which doubles as a meeting/social space.

The quantity of fresh air supplied is based on total occupancy, with diversity factor applied. ‘When you’ve got 20-odd classrooms on a floor, they will not all be occupied at the same time,’ says Beer, who adds that the most cost-effective solution was to use the fresh air supplied by the existing plant (based on one person per 10m2 of floor area), supplemented by fresh air supplied from new AHUs installed on the floor. As a result, most of the Cat A installation was retained, including fresh-air ducting that circled the floor plate, with branches off feeding VAV boxes. ‘We took what was there, and then added supplementary systems on top to further increase capacity,’ Beer says. 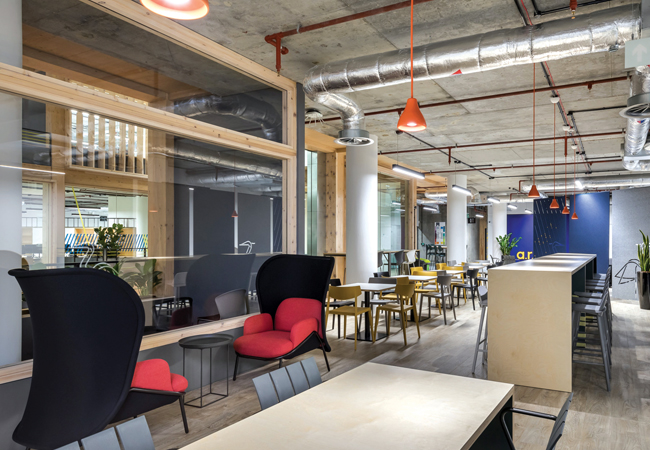 The base-build services had the capacity to deal with an occupancy of 300. To increase the air quantity to supply an additional 1,200 occupants on the fourth floor, Sweco’ implemented a solution similar to that used on the third floor: taking out windows and building six small, on-floor plantrooms to house additional AHUs. It added two plantrooms on each of the long elevations and one on each of the shorter elevations. New ductwork was installed parallel to existing ductwork, to deliver the additional fresh air from each AHU to three or more lecture theatres.

Heating is provided by an existing low temperature hot water perimeter radiator system. When it comes to cooling, the engineers were helped by academia’s summer break, which meant the majority of rooms would be unoccupied during peak summer temperatures. There are also no suspended ceilings on the office floors, so the engineers were additionally helped by the exposed thermal mass of the concrete soffit.

Cooling in the lecture theatres is provided by centrally mounted, four-way variable refrigerant flow (VRF) ceiling cassettes, connected to individual roof-top condensers. The cooling cassettes mean that each lecture theatre is, effectively, served by three separate systems: conditioned fresh air from the original Cat A installation; additional fresh air from the new AHUs; and cooling from the VRF system