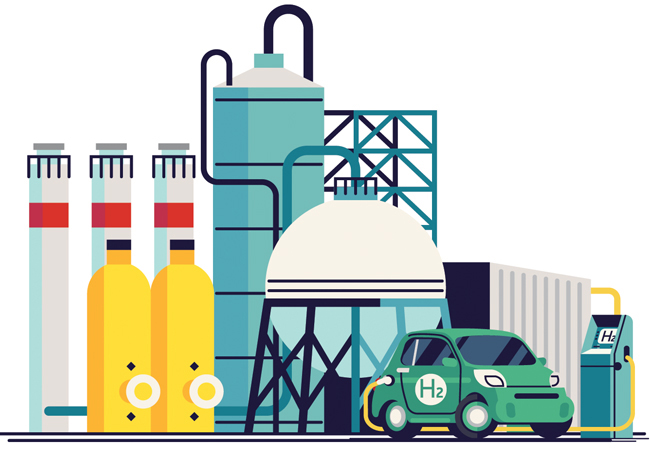 Be lean, be clean, be green. This is the order of priority for generating low carbon heat in new developments in London, as stipulated by the 2008 London Plan. But should we always follow this mantra? It makes sense to put lean measures first, but fossil fuel-burning CHP engines are considered ‘clean’ in the plan, and is it right that they should be selected ahead of ‘green’ renewable technology?

In the July 2016 edition of CIBSE Journal, Keepmoat’s Nigel Banks wrote that – after the future decarbonisation of electricity – CHP will become the worst option in terms of CO2 reduction. In August, the CIBSE Homes for the Future Group held a debate on heating for modern homes, outlining different visions of a gas or electric future, which left the audience divided.

In our office, energy strategies for London-based, large residential projects have written themselves in recent years, with CHP district heating the predictable outcome. However, there is a sense within the industry that change is inevitable. 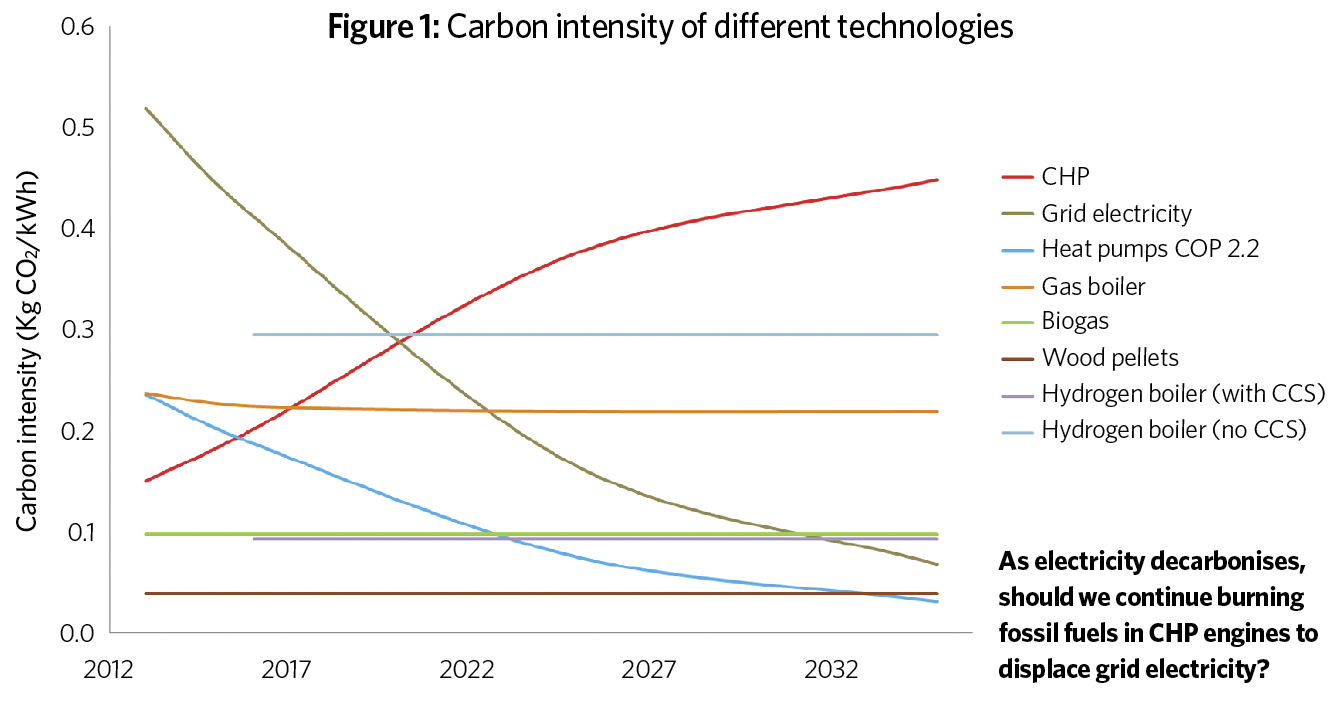 The future carbon factor of the grid is uncertain. The recent reduction in carbon intensity has a lot to do with the price of gas – and, in turn, global politics – so there is a risk that the electricity carbon factor will fluctuate like the stock exchange. But surely we should plan for meeting the targets of the Climate Change Act 2008 – and, regardless of the price of gas, lowering carbon intensity is necessary to achieve this.

Figure 1 also includes a hydrogen boiler option. The idea is to transport hydrogen – created by a steam methane reformer (SMR) – on the gas grid, instead of natural gas. This raises the opportunity to capture up to 90% of the carbon dioxide (CO2) created during the process, which could then be transported and collected in large CO2 storage facilities.

The transition from a gas to a hydrogen grid is an overwhelming concept because so many factors have to be considered. For example:

If the transition was achieved, the benefits would be:

The H21 Leeds City Gate study aims to determine the feasibility – technically and economically – of converting the existing natural gas network in Leeds to 100% hydrogen. To balance the supply from SMR facilities with the fluctuations of demand, it proposes to store hydrogen in salt caverns in Teesside and East Riding. This may be a viable solution for Leeds, but other UK regions may not have suitable options for large hydrogen storage.

The H21 Leeds report calculated a carbon factor of 0.086kgCO2/kWh for converting the city to hydrogen, complete with carbon capture and storage (CCS). This correlates to a 58% carbon saving compared with natural gas.

The simplest and most common process of carbon capture and storage (CCS) is scrubbing the flue gases that leave the SMR process in an absorber tower, by contact with monoethanolamine (MEA), a liquid that binds with CO2. About 90% of CO2 can be collected using this method. The MEA liquid is then heated by the excess steam from the SMR process to separate the CO2 again. The MEA is sent back to the absorber tower, while the CO2 gas is compressed for transportation.

As areas of the North Sea are being depleted of natural gas, they could be converted into viable CO2 stores. The infrastructure costs mean there is an economy of scale – the more cities that convert to hydrogen, the lower the cost per user of CCS. But is CCS merely a transition technology that allows us to burn every last drop of fossil fuel and delay an inevitable transition to electricity? Is it worth the investment and upheaval to build a hydrogen infrastructure, if it will be short-lived?

When thinking about the future of heating our buildings, we need to consider transport, which must also decarbonise if the UK is to meet targets in the Climate Change Act 2008. The capacity of our existing electricity grid is limited; do we expand it to heat our homes, or to fuel our vehicles, or both?

UK power stations produce 30 million tonnes of oil-equivalent electricity per year, and the gas infrastructure provides domestic buildings with 25mT. If the nation’s domestic heating was converted from gas to electricity, the 25mT demand should reduce to 10mT through the use of heat pumps and greater building-fabric efficiency. The UK’s transportation needs are even greater, at 55mT, but this reduces to a 23mT demand for electric vehicles, because of their higher efficiency.

The domestic heating and hot water demands, which peak in winter and in the morning/evening, will need to be met by building more power stations. By adjusting for seasonal and daily variations, we have calculated an estimated peak demand for heating the UK’s homes of 75GW. To put that into context, the peak demand in recent years has been 59GW (February 2012), so a lot more power stations, pylons and substations will need to be installed.

So, if we can only afford to upgrade the electricity infrastructure for vehicles or homes, the priority should be vehicles because the carbon reductions would be larger for every MW of additional capacity.

Hydrogen hobs for cooking could be designed to be more efficient than gas hobs as the pan could be placed directly in the flame without fear of incomplete combustion or carbon deposition. Because hydrogen generates more water than methane, a hydrogen oven will keep meat moist, but pastries may be soggy.

Another benefit of electrifying transport is a reduction in air pollution. Whereas the products of combustions from buildings are directed, by flues, away from pedestrians or occupiers, vehicles emit pollution at low level, in and among pedestrians.

If we are to electrify transportation and the heat for our buildings, services engineers need to design heating and hot water systems in a way that reduces peak demand. This means less instantaneous generation and greater use of hot-water storage, thermal mass and Passivhaus performance. People should also be incentivised by different day/night electricity tariffs.

Electric vehicles are slowly increasing their market share and London already has buses powered by hydrogen fuel cells, albeit with hydrogen mostly shipped from the Netherlands.

Hydrogen without CCS and electric vehicles have similar carbon factors but – when CCS is added – the emissions of the hydrogen vehicle are 79% lower than the petrol alternative. Meanwhile, electric vehicles could lower emissions by 93%, based on 2035 predictions for the grid (Figure 2). 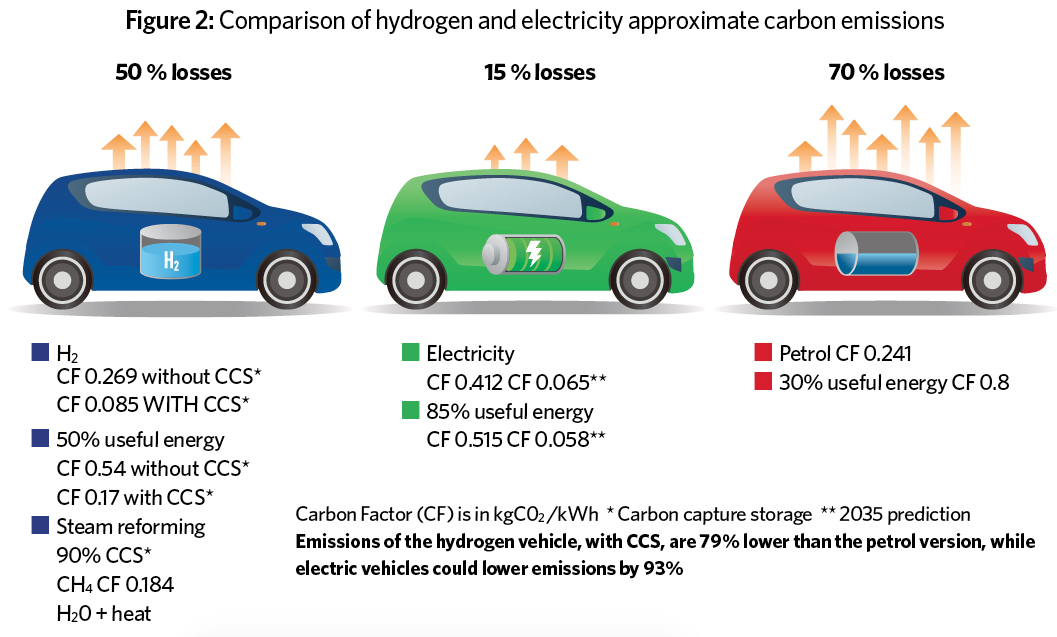 The key benefit of reducing air pollution in cities is also realised with both the electric and hydrogen options. The switch from petrol to hydrogen transport is easier to implement than converting the gas grid, because individuals can be incentivised to buy a hydrogen vehicle. It is also more suited to those who park their car on the street and so have no means to charge an electric car.

We believe the low-carbon future of heating our homes is predominantly electric, but the transition will be very slow, unless a clear national strategy to upgrade the capacity of the grid is outlined. The disbanding of the Department of Energy and Climate Change raises concerns about the likelihood of getting this direction, or of joining up the thinking between the construction and transportation industries.

Changing the vehicles we drive appears to be a simpler logistical exercise – and more rewarding in terms of carbon savings – so should be the government’s priority. There is probably space for hydrogen and electric vehicles in our low-carbon future.

As shown in Figure 1, CHP doesn’t make sense. Biomass and solar thermal can still play a part, but will be limited in urban areas. District heating systems are valuable because they make the switch from gas to electricity simpler – the key is ensuring that the distribution losses of these systems are managed.

One thing is clear, the government needs to be decisive and set a clearer course to the 2050 climate change target. It needs to state what the future capacity and carbon emissions of the gas and electricity networks will be, so we can advise our clients about which system to install. We also need the Building Regulations and regional planning policies to be revised accordingly.

A draft London Plan consultation is scheduled for autumn 2017, and TÜV SÜD will be campaigning for a change from the ‘be lean, be clean, be green’ mantra. The investment costs of a low-carbon electricity grid and/or hydrogen economy are vast, but the cost of doing nothing is worse in every way.

David Davies is associate director and Alex Pepper is a sustainability consultant, both at TÜV SÜD Wallace Whittle 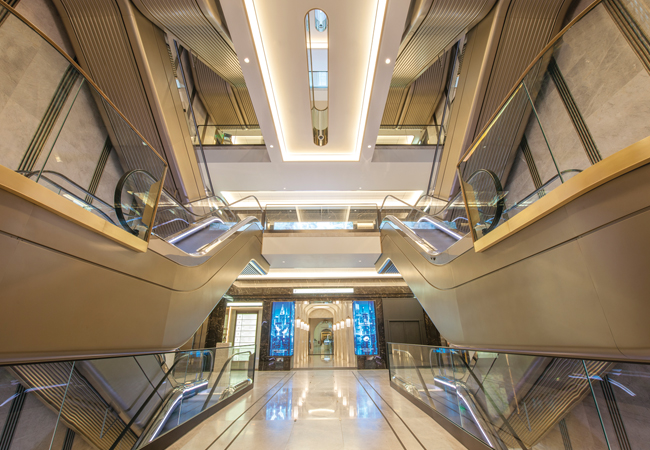