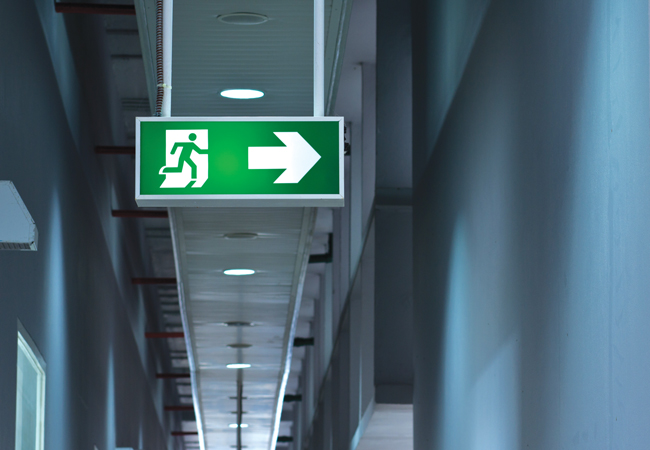 The standard has more on emergency safety lighting and standby lighting, and responsibilities are better defined – but the area is now more complex, so there is potential for misunderstandings between the parties responsible for the briefing, design, installation, testing/commissioning and ongoing operation of emergency lighting.

Emergency lighting is required for incidents involving a power failure – where the absence of electric light would compromise people’s means of escape – and ensures the safety of building occupants, including in external areas, up to the place of safety as defined by BS EN 1838. 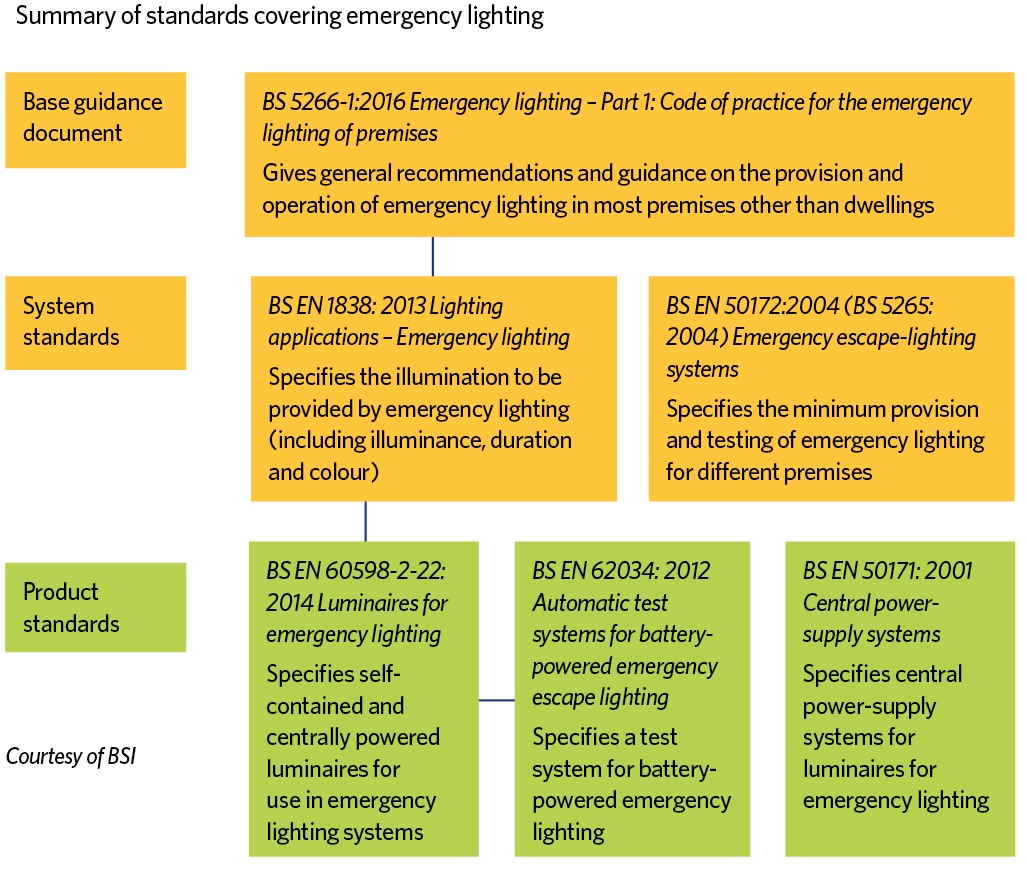 It is governed by a number of documents. The ultimate legal statutes are: the Regulatory Reform (Fire Safety) Order; the Health and Safety at Work Act; Building Regulations; and the EU Workplace Directive. Specific compliance guidance is given by Approved Documents B1 and B2, and design and product standards BSs and BS ENs as identified below:

The Regulatory Reform Order, Approved Documents and BS 5266 cross-reference each other, and should be seen as the main methods of demonstrating compliance.

Since 2005, and the introduction of the Fire Regulation Reform Order, the legal imperative for installing emergency lighting systems is the same as for fire-alarm systems.

For emergency escape lighting, there is no change in BS 5266, but it is worth noting that the system has to cover all escape routes to the place of safety (BS EN 1838), which may be in the immediate vicinity or away from the building. This must be adequately lit by the emergency lighting system or an independent power supply, such as public street lighting.

Small changes can trigger a larger level of responsibility

Emergency safety lighting applies to buildings for which a staged evacuation plan is implemented during power failure. Emergency safety lighting is adequate to allow occupants to stay in an area of the building during a power failure, but is not enough for functional tasks to be continued. The Health and Safety Executive’s document HSG 38 Lighting at Work gives the minimum requirements for this type of lighting.

Standby lighting is needed in buildings where functional tasks must continue during power failure. This needs to be 100% of the normal lighting.

The building owner is required to prepare a risk assessment detailing the emergency-lighting risks they have identified as applying to the occupation of a building.

In the case of a multi-occupancy building, the tenants are responsible for doing a risk assessment for their tenanted area, and the landlord is responsible for the common areas. The risk assessments can only be written by the responsible person because they include the management procedures that apply to their occupancy. This includes: identifying high-risk areas; high-risk or safety-related tasks; and areas where occupants may be required to remain in the case of a power failure. Points of emphasis and high-risk areas are likely to change during the life of a building. (For more, see the expanded version of this article at cibsejournal.com).

Who is responsible for emergency lighting?

The responsibilities for emergency lighting are generally as follows:

Client: to procure and operate safely an emergency lighting system, to ensure competent designers, installers, and maintainers are employed/briefed to procure the system, to risk assess, as necessary appropriate changes to the accepted standards defined by BS5266 and to discharge his responsibilities under Fire Regulation Reform Order 2005.

BS 5266 defines competent person as: ‘person with the relevant current training and experience, and with access to the requisite tools, equipment and information, and capable of carrying out a defined task.’

However it does not define the roles of the parties in the life of an emergency lighting system. The following definitions of roles have been distilled from the standards

Designer: to design the emergency lighting systems in accordance with the responsible person’s risk assessment using the Emergency lighting standards and best practice documentation as a baseline to ensure safe escape from the building.

Installer: to install the emergency lighting system in accordance with the designer’s documentation to test and commission both photometrically and electrically (as necessary) the system and provide all as fitted documentation in line with the actually installed installation and to handover the system to the client.

Maintainer: to be responsible for the ongoing inspection, testing and maintenance of the system and updating all emergency lighting revisions on to record information and maintaining the log book.

Facilities management (FM) teams are aware of the weekly fire-alarm tests and should be aware of the need for a daily visual inspection of the emergency lighting before occupation of the building.

BS5266 refers in more detail to competency standards for the designer, installer and the maintainer. The responsible person must ensure they engage competent people for all stages of procurement and operation of the emergency lighting system, from the time they first occupy the building until they leave.

The definition of competency is not established within BS 5266 Part 1. SLL recognises competency as a full member of the society (MSLL) who has sufficient emergency-lighting knowledge through relevant experience. AMSLL and MCIBSE members are not recognised. The British Association of Fire Engineers (BAFE) also has a competency qualification course that can be accessed through the mid-career college.

The legal basis of emergency lighting procurement is essentially the same as that for fire regulations, in that the building owner/organisation is the ‘responsible person’ as defined by the regulations. As such, they must ensure the correct provision and operation of the emergency lighting system(s). Best-practice methodology responsibility includes:

The adoption of LED luminaires and the upgrading of battery technologies have opened the door to a new class of system that didn’t exist before distributed central power supplies. These systems – which are common in Europe – offer extensions in rated battery life from four to 10-plus years, with reduced spatial requirement and lower FM and capital costs – between those of traditional self-contained systems and central power-supply systems. LED luminaires are now often the first choice for emergency lighting, but there are pitfalls, such as the introduction of batteries and an inverter changing the ambient temperature within the luminaire.

LED luminaires are often considered the first choice source for the majority of emergency lighting. However there are pitfalls to be avoided. It is important to understand the specification and supply chain of any emergency converted general LED luminaire as the introduction of the batteries and invertor into the interior of the luminaire will change the ambient temperature Ta within the luminaire.

The manufacturer undertaking the conversion would be responsible for re-undertaking the LED thermal testing of the luminaire. Manufacturers who have emergency versions of catalogue products would be expected to have carried out full product testing on the emergency version. If emergency provision is provided from a separate external battery pack it is important for designer and installers to check the full compatibility of the battery unit to deliver the required emergency luminaire lumens and that there is no impact on the published characteristics of the LEDs or drivers.

This is important in two-stage design situations where a designer undertakes an initial design and the contractor takes on the final choice of equipment and installation. Photometrics of LED luminaires vary considerably and vertical illuminances on points of emphasis – for example fire alarm manual call points and first aid points – are quite sensitive to movements within the 2m distance recommended by BS 5266.

With LED luminaires the lighting design is much more equipment specific meaning changes of luminaire or manufacturer have to be checked carefully. Typical emergency LED luminaires do not always provide the 5 lux on the face of non-internally illuminated signs, due to their heavily downward based photometry. Gone are the days of every manufacturers’ 8w bulkhead being the same photometrically.

BS 5266 now also specifies that central power-supply systems feeding emergency lighting should be in their own dedicated room. Service life for nickel cadmium batteries is mentioned as being four years. This would indicate that additional proof of the self-contained luminaire’s or battery pack’s ability to produce the required emergency lumens would be needed after four years. This proof might consist of an illumination survey at the 1hr/3hr marks of the annual duration test. Where occupiers of a building append their own non-illuminated emergency signage, this must also be illuminated by the emergency lighting system under BS 5266.

With these amendments, it is easy to see how small changes to a building can trigger a larger level of consideration and responsibility for the responsible person – usually discharged through the FM team. 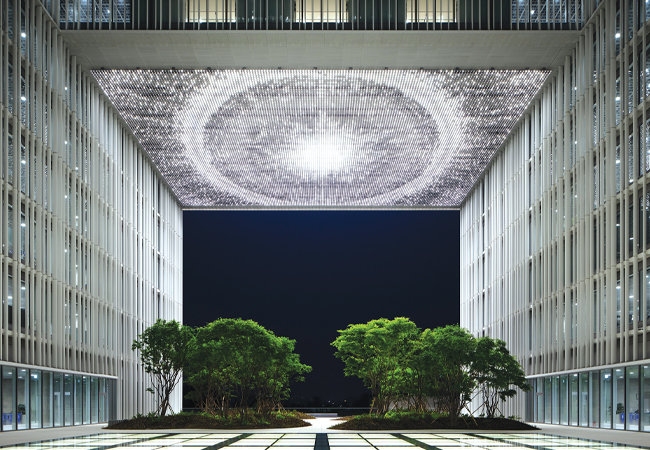