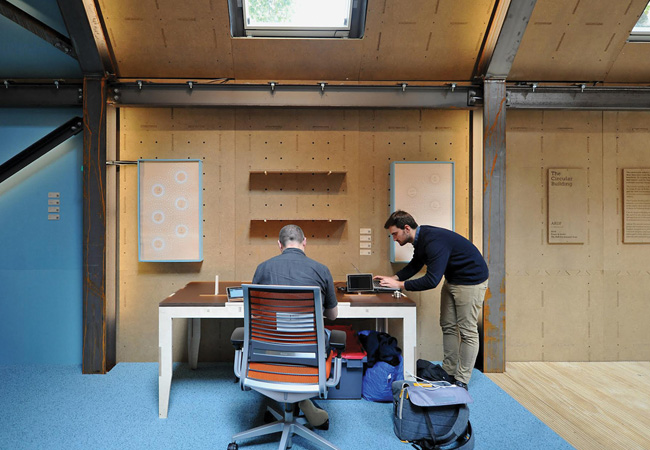 Smart organisations understand that the effectiveness of their people is key to commercial success. One of the key factors influencing an employee’s performance is the extent to which they perceive they have control over their physical work environment.

This is a particular challenge in open-plan offices, which are great at encouraging collaboration and making efficient use of floor space, but come at a cost to workers’ ability to influence their immediate physical environment. This could be about to change with a research project undertaken by consultant Arup.

CO2 is a good proxy measurement of occupancy in an area. We think this will become an important control input for all sorts of things

The ‘All about the desk’ study uses low-cost mobile and sensing technology – combined with open-source software – to allow employees to control task lighting and, in the future, temperature too. Their desk could also save energy by detecting when they are not sitting at it and so turning off the lights and computer monitors, or even turning down the ventilation fresh air supply.

The concept was born out of the frustration of Arup engineers, who were unable to control the environment around their desks in the open-plan office. Their annoyance was compounded by the fact that apps on their mobile phones allowed them to control almost everything else in their lives, including the temperature and lighting of their homes.

‘The project was a way to focus the discussions people were having in the office about how to modernise our approach to building services design for commercial buildings to catch up with the technology changes that people are seeing in other areas of their lives,’ says Arup electrical engineer Adam Jaworski. 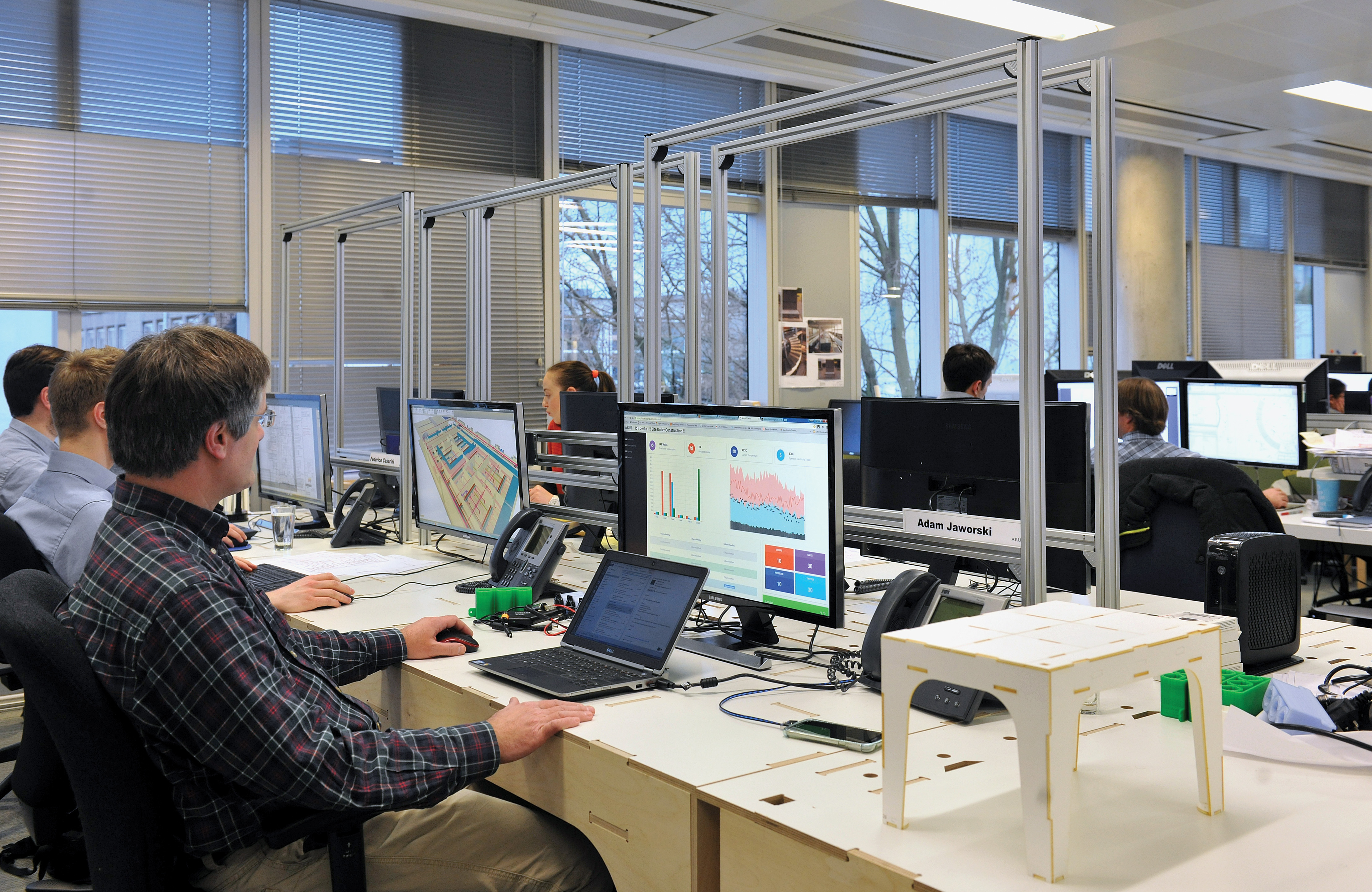 With the Internet of Things (IoT) Desk, the designers have assumed that the future of building services controls will be based on web standards. ‘The technology that
has been built for the web is very impressive; it is streets ahead of what traditional building services infrastructure is built around,’
says Jaworski.

He says a web developer would understand the signals they need to send and receive from the building services system – for example, to raise or lower the light level or temperature – without having to understand how the system works. ‘They could then easily make a web page with the right commands to drive the lighting or the fan coil units.’ 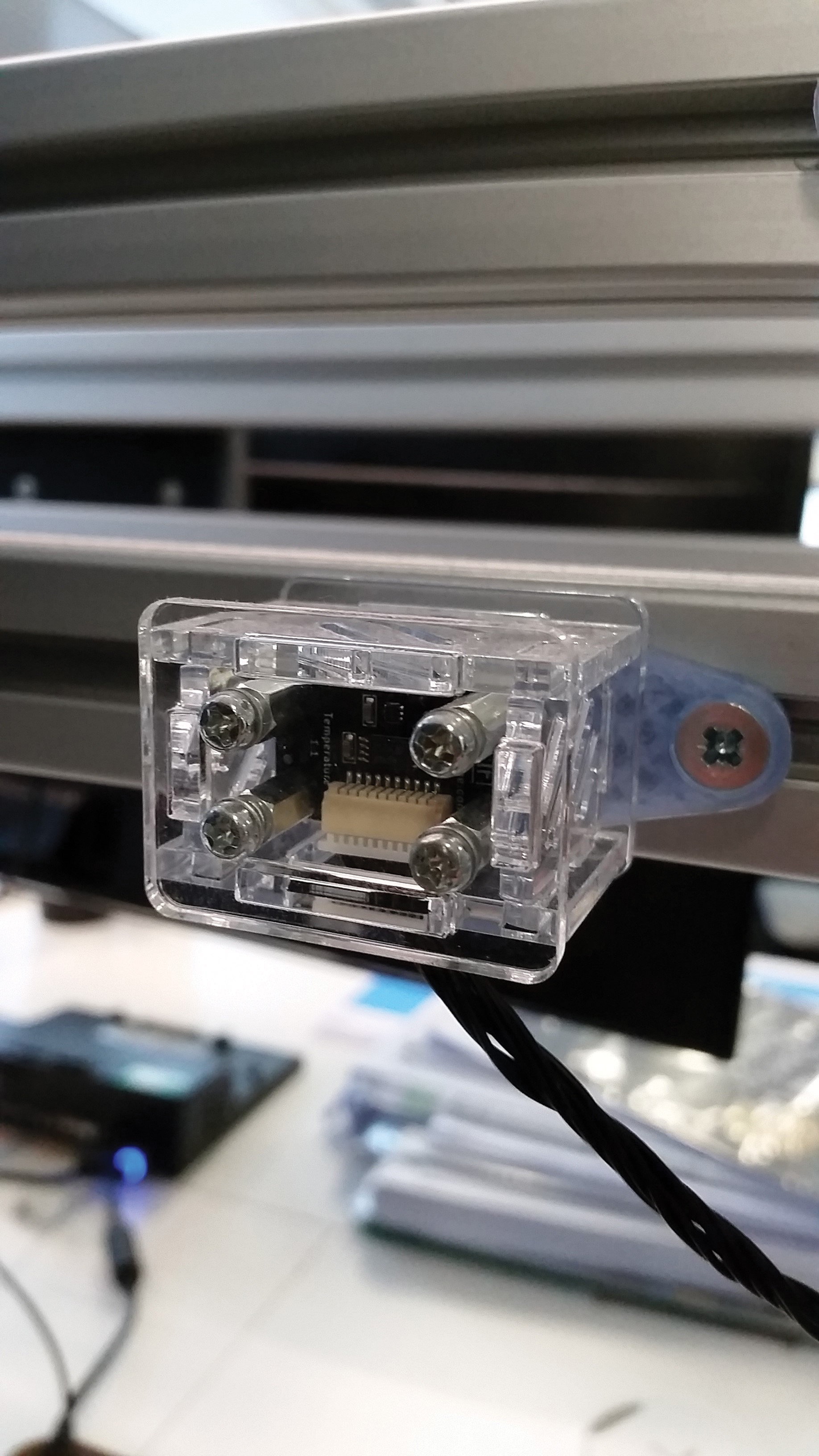 The system is being trialled in Arup’s London offices, on a bank of six prototype desks – one of which is Jaworski’s. In a nod to contemporary manufacturing techniques, the prototypes have been designed using SolidWorks and then fabricated from sheets of plywood using rapid-manufacturing technology.

The desks incorporate a service zone beneath their work surface, to make it more flexible and adaptable for trialling technologies than a conventional office desk. They also include a goalpost-like structure – mounted at the rear of the work surface – to support a monitor display and house the LED task lights and uplights (see panel, ‘Local lighting’).

Power is supplied to the desk using Power over Ethernet (PoE). All the desktop electrical devices use DC power, so the LEDs, a monitor, a laptop charger and a USB socket – which can be used to charge a smartphone – are each connected to a dedicated Ethernet cable.

At the end of the cables is a splitter, to separate power from data, with electrical power delivered via a 12V DC socket, which is the same as the device socket fitted to cars. Three sockets are used in the same way as car-accessory sockets; the fourth is hard-wired into the lighting system. 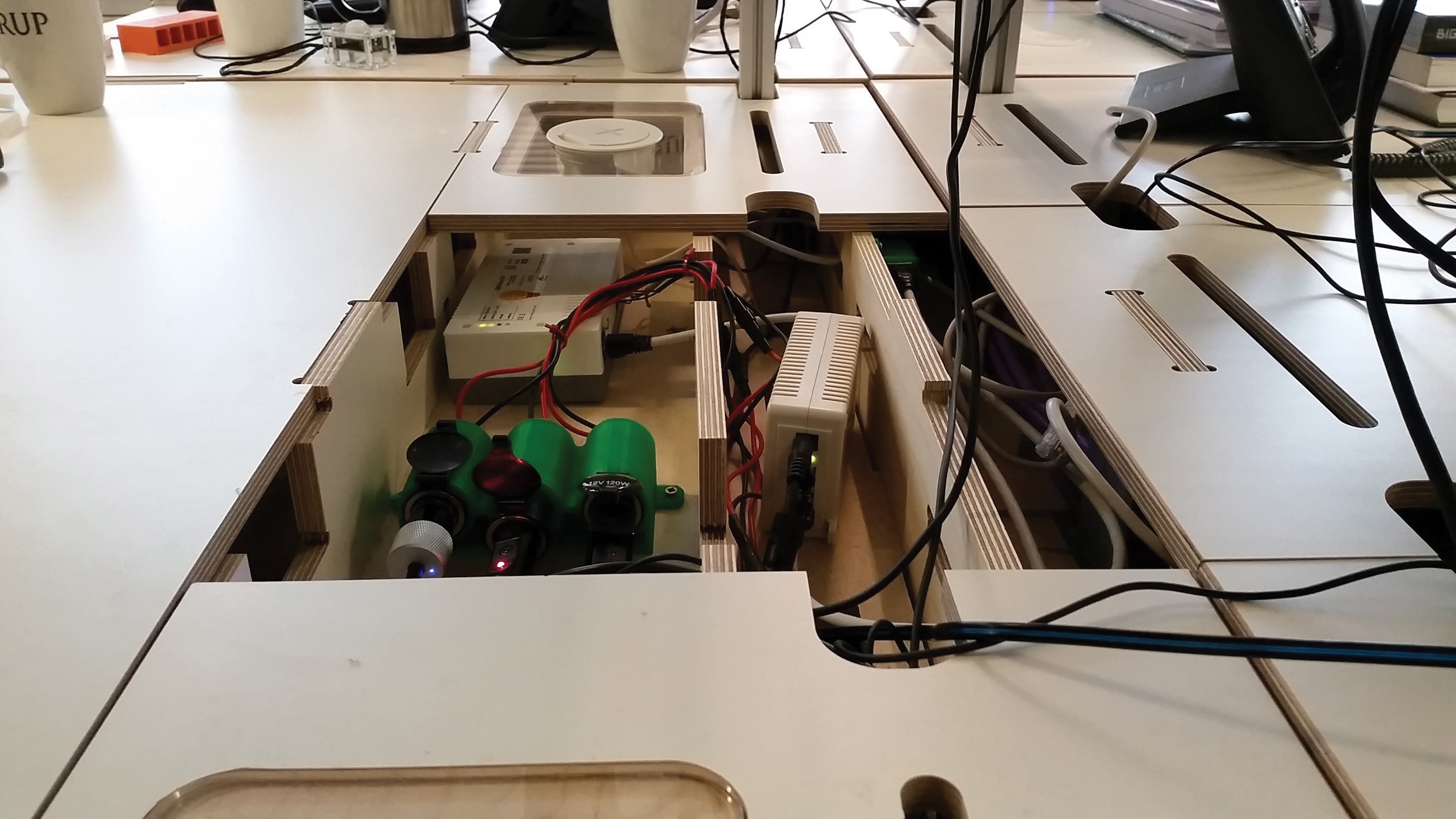 A service zone sits beneath the desk's work surface

‘In a normal office desk you would have 13-amp sockets at the back of the desk, with devices connected to them via AC adaptors. All we have is structured cabling that delivers PoE from a cabinet, which is fed from a single 13-amp socket,’ says Jaworski.

Using PoE enables interaction with – and control of – a device directly. For example, it allows power to the monitor to be turned on and off digitally. Information can also be extracted from a device – such as, its power consumption or a measurement from a temperature sensor.

‘Each of the four Ethernet cables can deliver up to 60W of direct current power, while allowing the devices to communicate using the same systems and protocols that are used to access information on the internet,’ says Jaworski. 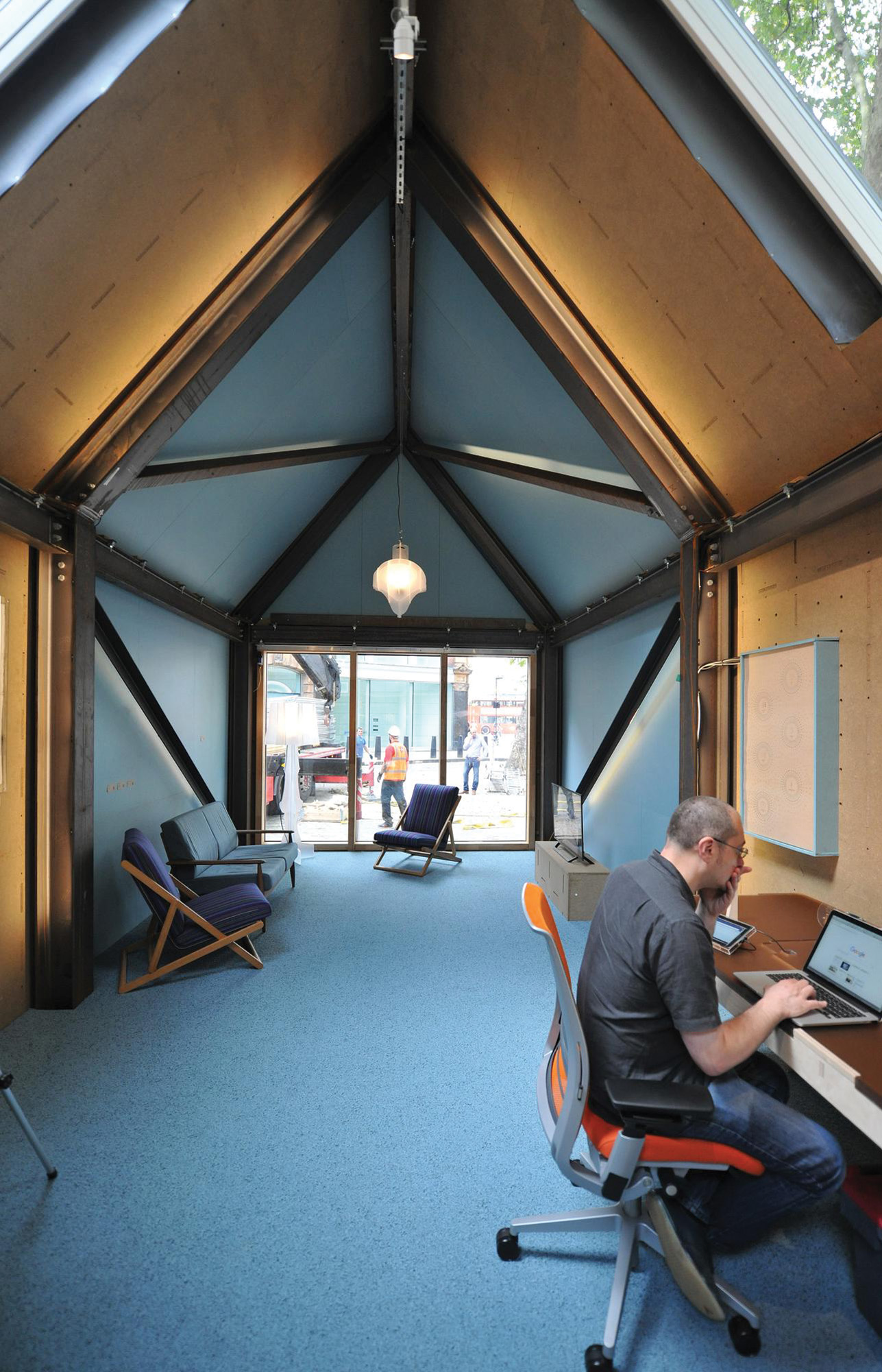 Other advantages of using extra-low voltage DC in an office are that it is less hazardous to employees than AC power and – when installed as part of a coherent building solution – can be delivered directly from renewable energy sources. It also has the advantage of being stored more easily.

The prototype desks are fitted with a low-cost sensor system manufactured by TinkerForge. The sensors measure temperature, humidity, ambient light and mean radiant temperature on each desk, offering much better comfort control than by simply measuring air temperature. In addition, the desks have an occupancy sensor in their footwells, so the system knows when they are in use.

The sensor allows the desk to be set up so the task light comes on at a pre-set level and the monitor powers up when someone is sitting at the desk, and turns off when they leave. ‘To achieve this control on a regular desk is uneconomic, but it is easy to do once you have a web interface,’ says Jaworski.

Quality of lighting can have a significant impact on workers’ wellbeing. There is evidence that the ability to adjust lighting locally – in response to the demands of different tasks – can have a positive impact on employees’ physical and psychological health. Most have little or no control over their task lighting; instead, they sit in an office lit to a uniform Lux level, which, at best, might vary in response to daylight levels adjacent to the windows.

The prototype Arup desk is designed to vary light levels and to give people control over their light. Each desk incorporates a series of upward-facing LEDs that illuminate the office ceiling. These uplighters are managed as a group; they are designed to allow the colour and intensity of light in the room to be varied throughout the day under the control of a circadian algorithm, to emulate variations that occur in the natural environment. The LEDs are controlled so that, in the morning, the lighting has a higher blue component, while – in the afternoon – its red component is increased.

Task lighting is from a series of downward-facing LEDs. While the colour of the downlight is fixed, users can control the intensity of the light. ‘We supply the light with power; we tell it what to do, and we use a new-to-market native driver to set the brightness and to make the light go on and off,’ says Jaworski.

OpenHab open source software is used to control the desk’s different systems. ‘It allows you to drive many different building services legacy protocols, such as Modbus and BACnet, and the newer-generation devices that natively speak web languages,’ Jaworski explains. The software includes a framework for designing user interfaces that can be described easily in text files, to enable devices to be linked. ‘Because it is a single platform, it means we don’t have to have a controls sub-system sitting below the top level.’ 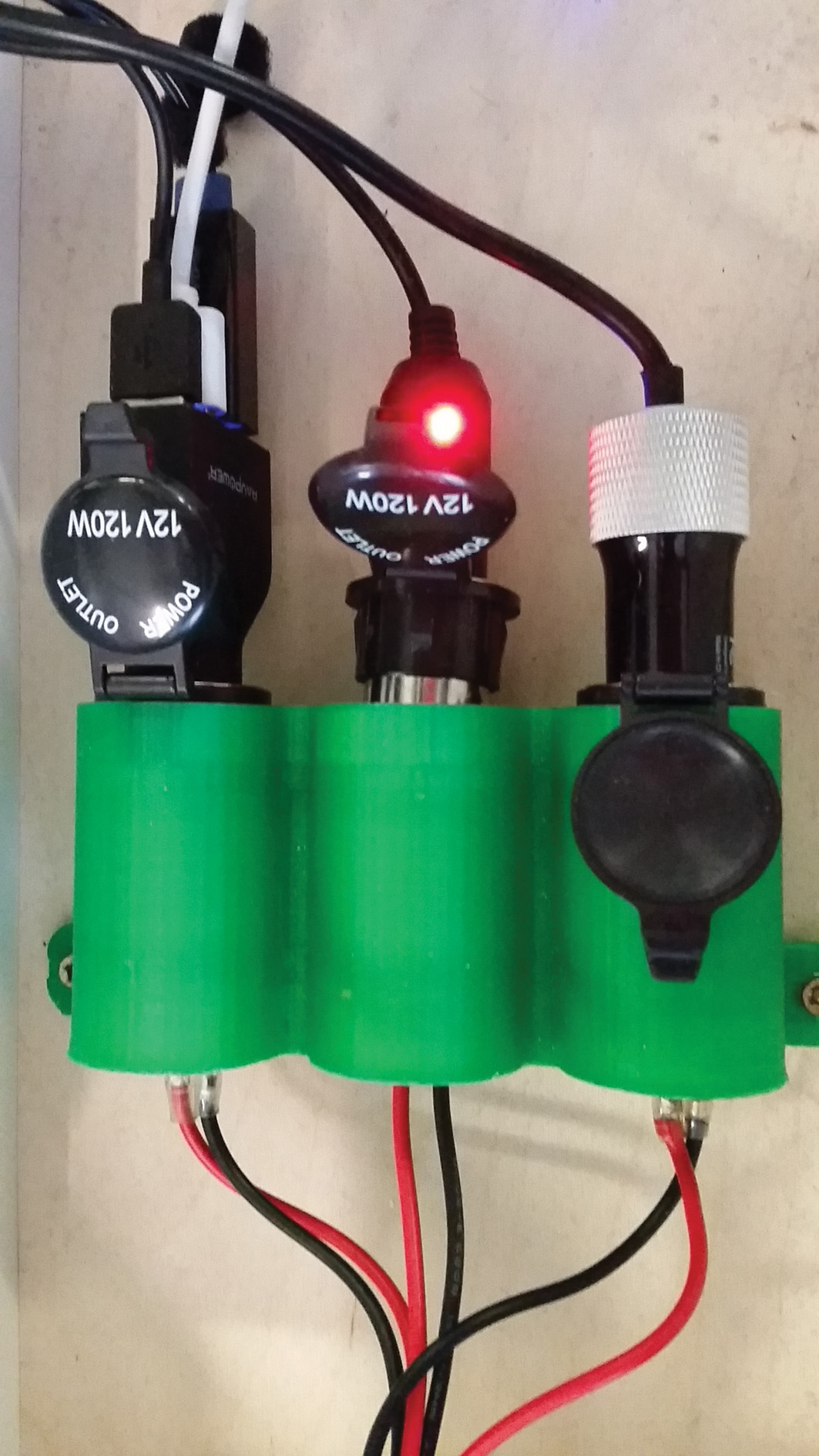 Electrical power is delivered via 12V DC sockets, which are the same as the device socket fitted to cars

Carbon dioxide (CO2) and particulate sensors have also been fitted to the group of desks to enable measurement of indoor air quality. Jaworski says the sensors have shown how the concentration of CO2 can vary when viewed over the course of a day – rising in the morning, dipping at lunchtime as people leave the building, and then climbing back up again. ‘CO2 is a good proxy measurement of occupancy in an area. We think this will become an important control input for all sorts of things,’ he says.

A Building Use Studies occupant survey is planned to get a more structured user response to the desk environment in the next phase of research, which will involve another set of desks and different engineers, sitting in another area of the office.

These desks will be integrated with a new-to-market fan coil unit system to provide heating and cooling to the office. ‘It is not feasible to have one fan coil unit per desk, so we’re looking to introduce desk fans as a form of comfort control and then use the fan coil to provide a general target temperature,’ Jaworski says.

It is early days for the project; over time, the research is expected to influence the way Arup designs offices and help it to gain a better understanding of the particular benefits of giving employees more control over their office environment. 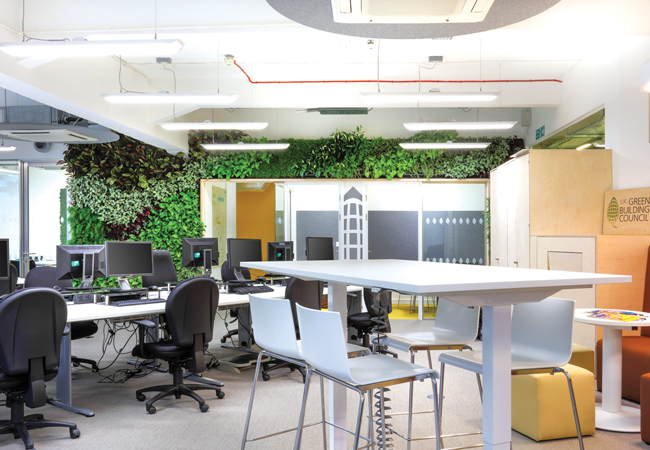 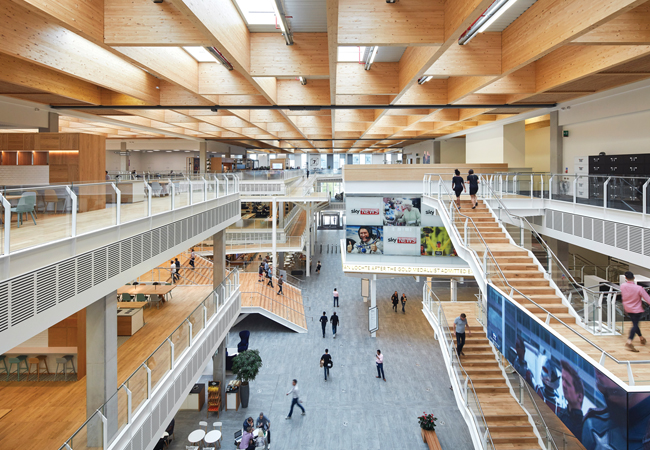 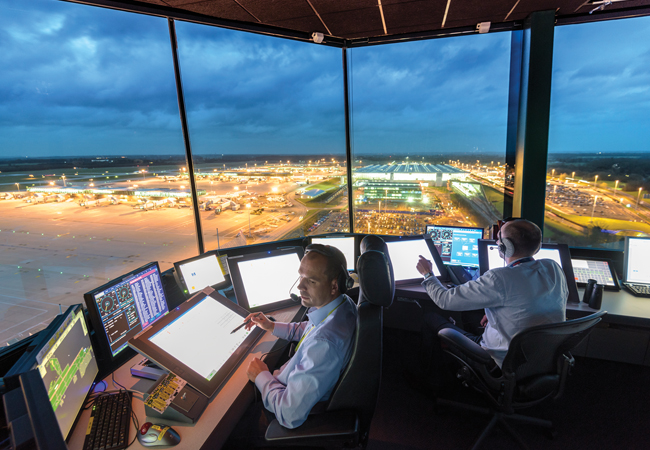