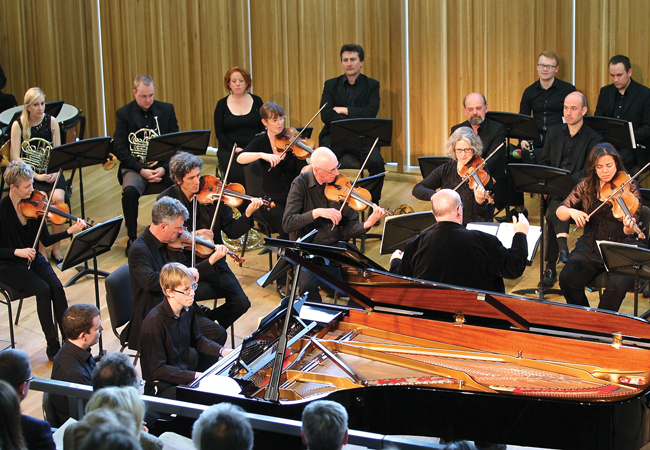 The University of St Andrews is internationally renowned for its research and education – as well as for concerts by its orchestra in residence, the Scottish Chamber Orchestra. To keep in tune with its reputation as a world-class music facility, the university has decided to create a new performance hub that it hopes will attract the best performers from around the globe.

The building, located on the historic Queens Terrace, will offer a range of practice, rehearsal and teaching spaces, a dedicated rehearsal and performance studio, plus a recording suite and library. It is hoped the project will be completed in 2018.

With experience of working on the Stowe Music School, in Buckinghamshire – among other music venues – a team of acousticians and building services engineers from WSP Parsons Brinckerhoff has been selected to design St Andrews’ music centre.

James Healey, acoustics associate director at WSP Parsons Brinckerhoff, says it is important in recital halls that the audience receives the direct sound produced on stage. To deliver this, large, high-level reflectors were placed above the stage at Stowe to angle the sound towards the audience. 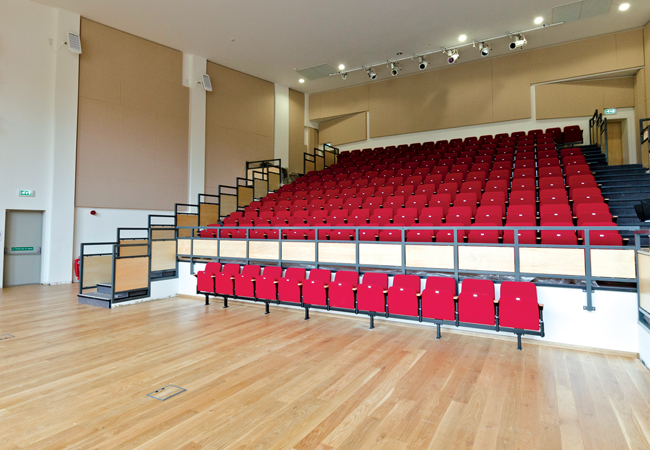 ‘We also wanted to deliver the very early reflections from the sidewalls and ceiling,’ he says. ‘Acoustic diffusers were installed on the walls, close to the stage, to scatter the sound and avoid undesirable reflections.’ In addition, acoustic absorption was used either side and behind the seating area to ensure the audience does not hear any reflected ‘late sound’. This can come slightly after direct sound, affecting the audience’s perception of the performance.

ISO 3382–1:2009 Acoustics – Measurement of room acoustic parameters provides some guidance on performance spaces but, generally, the acoustic criteria is based on the team’s experiences. ‘It’s also dependent on the client’s aspirations – how they are going to use the space and what will be performed in there,’ says Healey. At Stowe, the hall was to be used mostly as a piano-recital space, which needed a controlled environment. This was achieved by providing carefully-modelled fixed acoustic conditions. ‘It’s important to ensure the sound stays the same, regardless of occupancy,’ adds Healey. ‘In recital halls with fixed seating, the seats have to have the same absorption qualities as people, so you get a standard uniform sound even if it’s unoccupied. At Stowe recital hall, the seats were of equal acoustic absorbance to that of a person so the conditions were balanced regardless of whether the hall was occupied or not.’

In contrast, the recital hall at St Andrews – which must offer a rehearsal space for orchestras and choirs – will require variable acoustic conditions,’ says Healey.

Different surface treatments and building materials have a bearing on sound quality. One of the challenges when designing the Stowe recital hall was that the ceiling had to be lowered to free up space in the ceiling void for the services systems. This meant changing the acoustic treatment within the space. ‘We made the ceiling heavier and changed the wall profiling, to stop the sound escaping through the fabric,’ says Healey. ‘We wanted to keep the low-frequency (bass) sound within the space because it offers warmth to the listeners by giving them a sense of being enveloped by it. If the materials are light, and there’s a lot of absorption or leakage of bass sounds, you get a cold sound that isn’t in keeping with the musical production.’

Graeme Bruce, WSP Parsons Brinckerhoff’s head of building services in Scotland, says acoustics criteria must be at the forefront of the HVAC services design at St Andrews: ‘The air distribution system must be carefully designed so it does not ruin the acoustic performance of the space.’

The ventilation strategy is particularly crucial to the success of the building, adds Bruce. ‘In rehearsal spaces, for example, we have to ensure outside noise doesn’t encroach into the space, and we don’t want noise escaping and becoming a nuisance to neighbours.’ 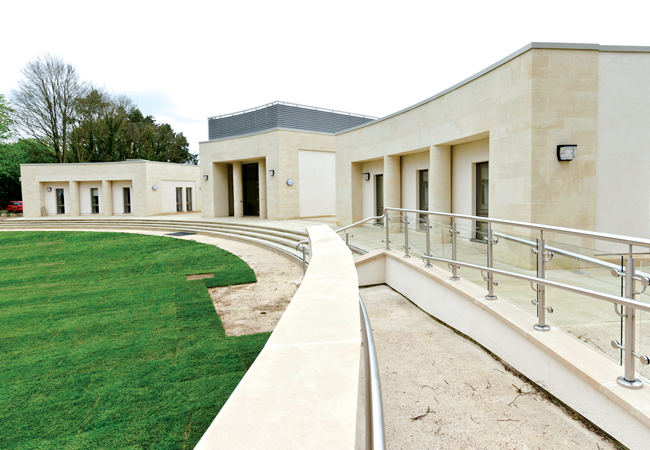 External environmental factors in St Andrews will also be taken into account during design. Humidity control will be crucial for this coastal town, which frequently experiences fog and mist. ‘Imagine a November evening,’ says Bruce. ‘It’s pouring with rain outside and 200 people are coming into the auditorium. Because air humidity affects how sound travels, the system we design will maintain a constant condition, regardless of the external environment. Our design must deal with a variety of changing conditions.’

Also high on the list of considerations is the vibration through the building structure. Plant items – such as fans or air handling units (AHUs) – can send vibrations through a steel frame creating unwanted noise.

From a building services perspective, the most crucial element of the St Andrews project will be identifying the noise criteria to which the services strategy will have to be designed.

‘At the same time, we have to comply with Section 6 of the Scottish Building Standards, and achieve Breeam Excellent and EPC A ratings. All these are factored into the design process,’ says Bruce. ‘We have to ensure the acoustics team is aware of our thought processes at every stage, including plant selection and plant location.’

The acoustics team at WSP Parsons Brinckerhoff uses modelling software to create a 3D representation of the space, within which any sound can be modelled in any location. ‘We can take Mozart’s recital and predict how it would sound in different points in the hall, and play it back to the client,’ says Healey. ‘That level of feedback is very important for something like acoustics, where what we’re creating is not visible.’ 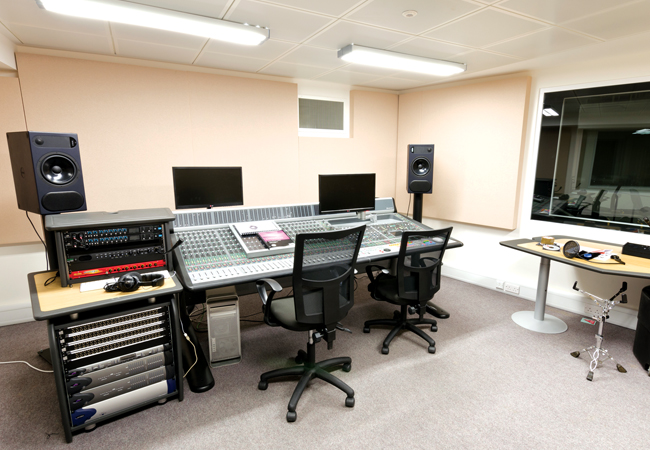 During objective analysis, the client is able not only to visualise the space using the architect’s 3D model, but also to hear how it’s going to sound. The acousticians work with a combination of models; they use the architect’s 3D design for visual cues, and develop their own acoustic model for importing and modelling the sound.

The architectural detailing and building services design in the recording rooms at Stowe Music School will inform the design at St Andrews. At Stowe, each room has a dedicated AHU that enables a high level of sound insulation between rooms and avoids ‘crosstalk’ issues – when sound travels through common ductwork between different rooms.

In smaller rooms, such as recording studios, standing waves – or ‘flutter echoes’, when sound bounces backwards and forwards within a room – can occur if walls are positioned directly opposite one another.  ‘These unwanted effects have to be removed because you want as clean and pure a sound as possible in a recording studio,’ says Healey.

To overcome this at Stowe, the team angled the walls. ‘Having a slight angle on opposing surfaces eliminates those echoes. We apply this to all music-related buildings,’ says Healey.

Bruce adds: ‘One of the benefits of a multidisciplinary approach is that we work in a collaborative manner. This enables us to share information – and make decisions – quickly, which is important because projects usually run quite tight. It also ensures we can deliver – and exceed – the client’s brief.’ 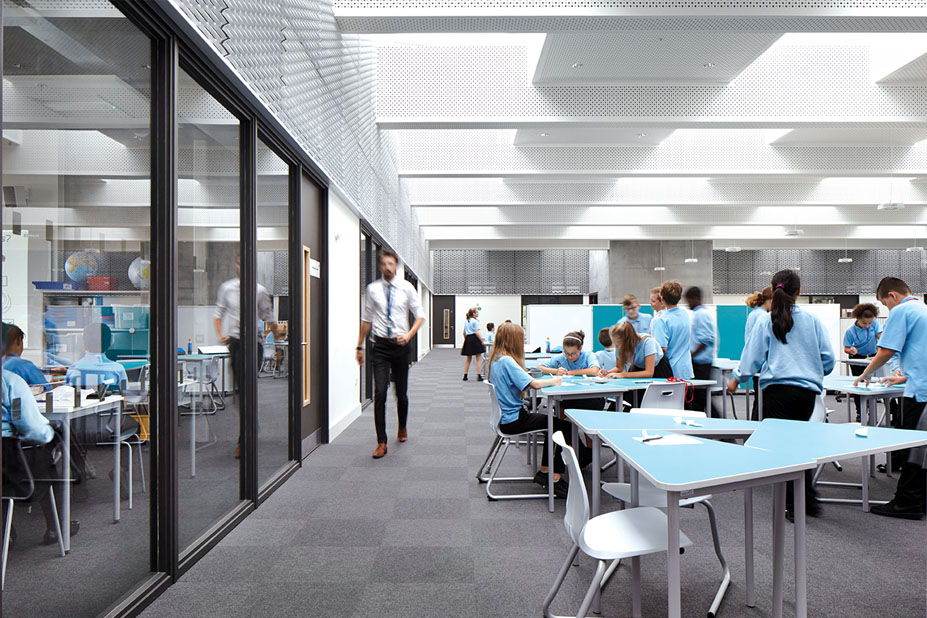