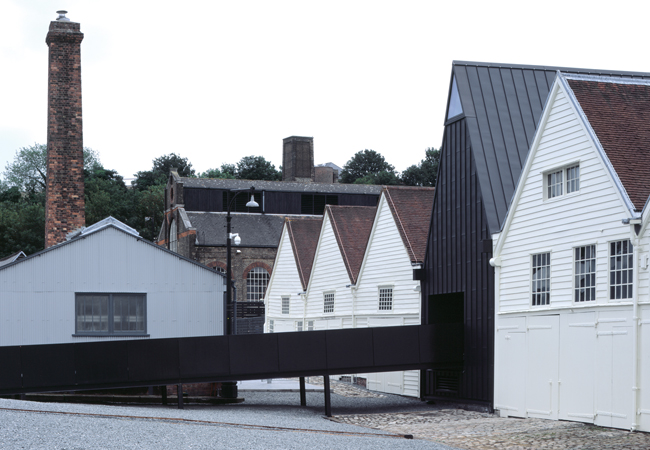 The HMS Namur was a remarkable ship. It was in the service of the Royal Navy for 47 years during the 18th century when the British Empire was establishing its furthest frontiers.

Launched at Chatham naval dockyard on 3 March 1756, the 90-gun, two-deck sailing ship fought in nine battles across the Seven Years War, American War of Independence and the Great French Wars. It fought at close quarters in numerous engagements such as the Battle of Lagos in 1759, where it was badly damaged, though not so stricken that it could not put to sail in time for the Battle of Quiberon three months later, which saw the French fleet vanquished. 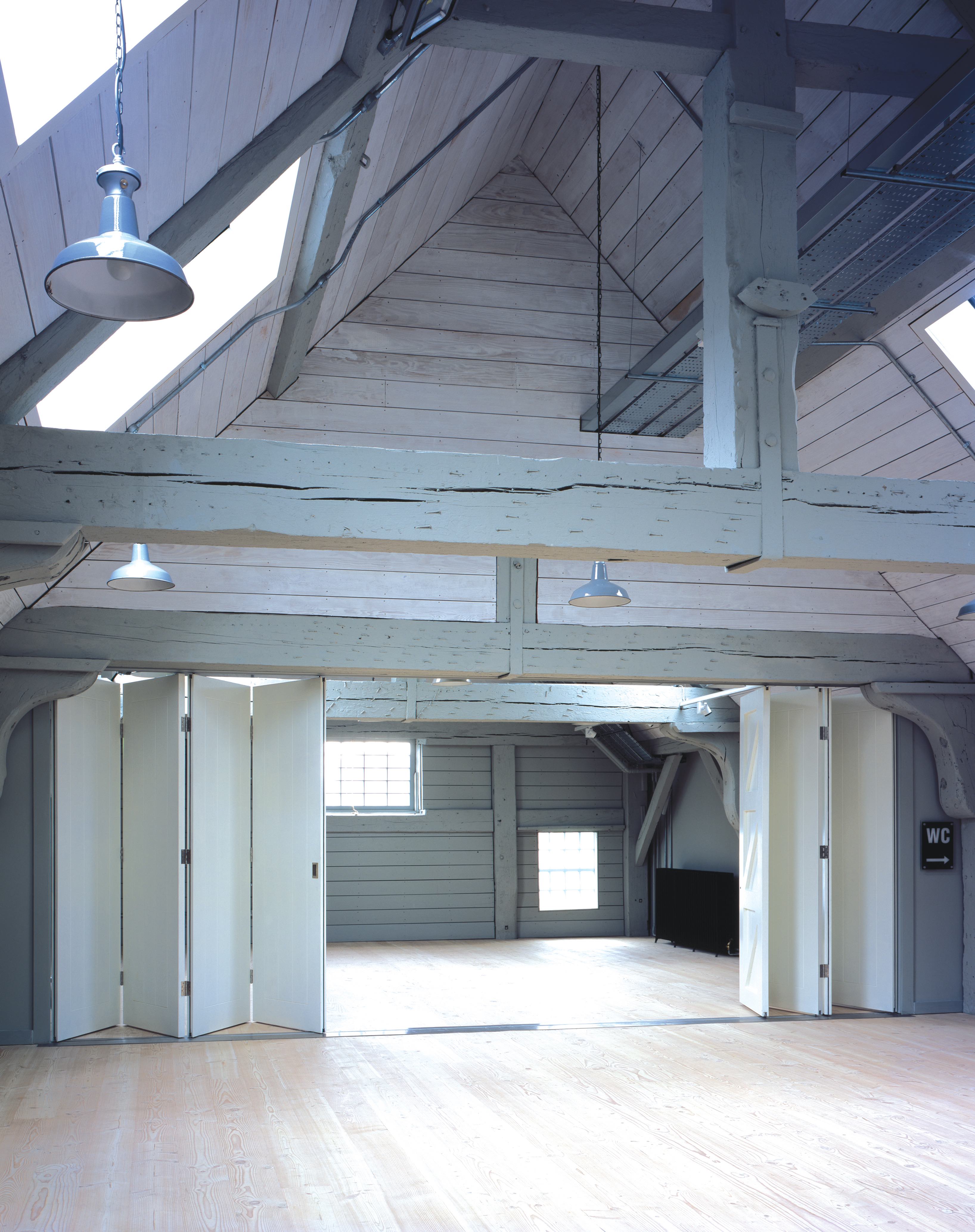 The ship touched the lives of major literary figures including Jane Austen, whose brother Sir Charles John Austen was captain from 1811-1814, and Olaudah Equiano, a slave on the ship whose searing memoir made him a sensation in literary circles and helped promote the cause of the abolitionists.

Despite its service to the Crown, the Namur had an ignoble end – broken up without ceremony at Chatham, its timbers used as floor joists under a shipwrights’ building. There it would have remained undisturbed, if not for its discovery in 1995 during routine conservation work.

Maritime experts quickly realised the importance of the find, hailing it the most ‘significant naval archaeological discovery since that of the Mary Rose’, and the The Historic Dockyard Chatham Trust pledged to make the Namur’s timbers the centrepiece of a major £9m conservation project.

The Command of the Oceans project, designed by Baynes and Mitchell Architects, is the result. The remains of the Namur can now be accessed by visitors via a new steep pitched-roofed building that connects the wheelwrights’ shop with another Scheduled Ancient Monument building – the mast house and mould loft. [see diagram right]. The buildings now feature exhibition galleries and retail and catering facilities, and form the main entrance to the dockyard.

That was difficult in itself, but the client was also committed to reducing energy bills in the restored buildings, which was a challenge considering that the mast house and mould loft are constructed from timber, have large, ill-fitting external doors, and are Grade I-listed.

To determine the Namur’s environmental requirements, the project team consulted a timber specialist, who told them they should replicate the conditions the ship had been subjected to for more than 200 years. This meant the undercroft that housed the timbers had to be unheated and thermally separated from the heated wheelwrights’ ship above, and from the new linking building.

Some ventilation in the undercroft was necessary to account for heat and moisture generated by visitors. Skelly & Couch calculated that a gap of 50mm to the underside of the old timber doors would allow cross-ventilation and supply adequate fresh air for occupants – the historic fabric made the specification of a louvre unacceptable. 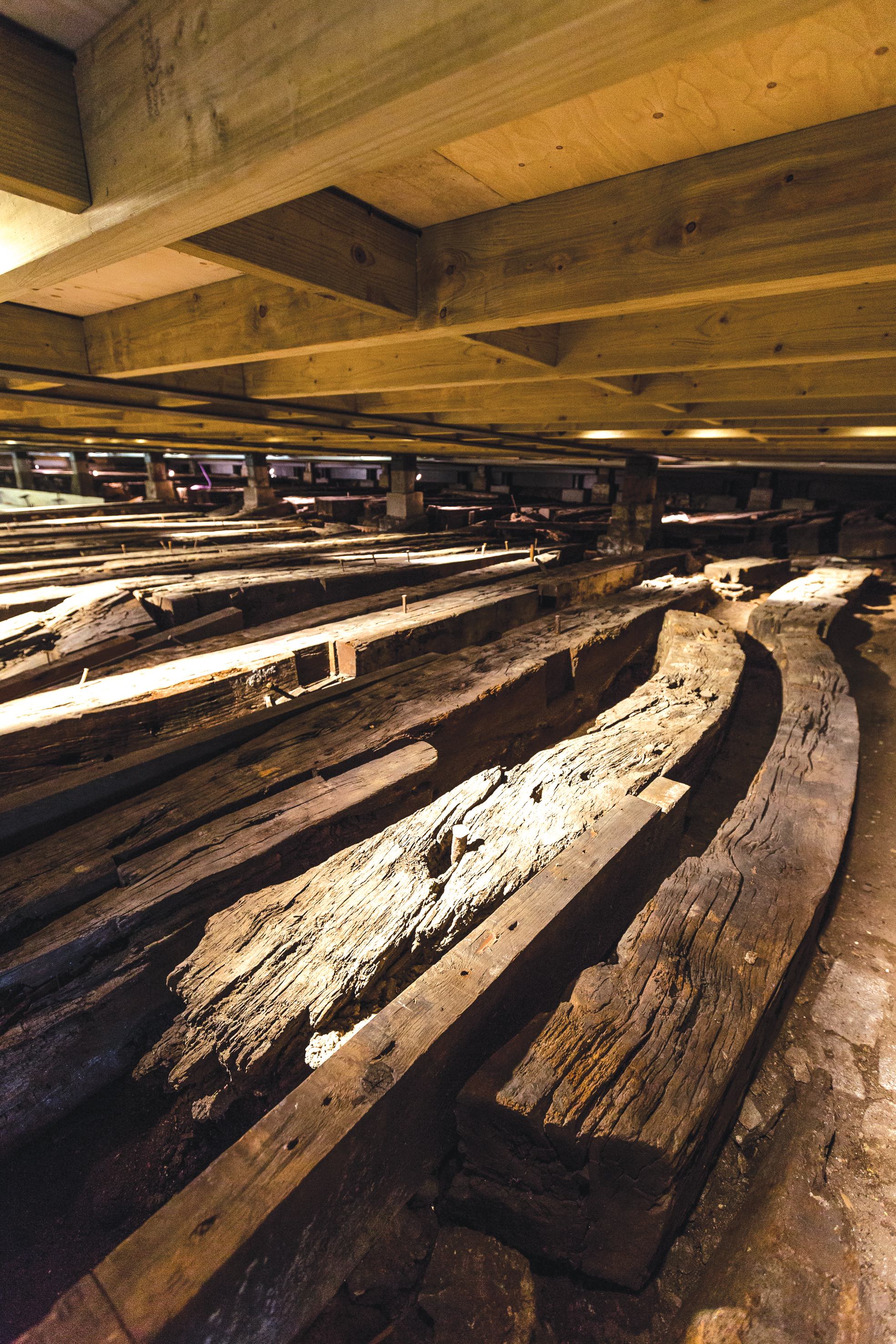 To account for future fluctuations in temperature and moisture, allowances have been made for a fan to be installed in the store under the link bridge next to the undercroft. The client is monitoring moisture and temperature levels in the undercroft closely to check whether ventilation plant is required.

Couch says that the British Standard for the storage and exhibition of archival materials BS5454 was not adhered to, as the cost of equipment required to meet the standard was prohibitive and there would have been nowhere to put it.

To enable public access to the Namur, the architect has raised the wheelwrights’ floor above the timbers and dug out a circulation route, which enables visitors to view the relics from a waist-high vantage point.

The drama of the ship’s history is brilliantly evoked through the lighting design, which casts great contrasts of dark and light across the timbers, so that every cut, notch, nail and ropemark is vividly displayed. Low-level lighting creates the shadows that help make the texture of the wood visible.

For longer views along the timbers, linear lenses have been used to emphasise the length. ‘This type of lighting really accentuates the timber. We didn’t want flat light. We wanted to create crypt-like lighting,’ says lighting designer Jono Kenyan at ZNA.

The containment routes, discussed with the project team at an early stage of design, meant holes and notches could be preformed in the steel columns used to jack up the floor above the ship’s timbers.

Although the bays above and adjacent to Namur’s undercroft are heated, many of the other bays in the mast house and mould loft are not. Of the 11 bays, five had heating decommissioned, while two bays in the mast house and three in the wheelwrights’ shop had heating installed and their thermal performance upgraded. These bays, heated primarily for the staff, include the café and shop, which are important revenue generators.

Skelly & Couch director Tristan Couch says Chatham Historic Dockyard Trust had a sensible attitude towards energy efficiency. ‘It had a heating system that was very inefficient, and there was no insulation, so it took the pragmatic view and removed heating from a number of the bays.’

Further reductions in energy use have been achieved by reducing the setpoint to 16°C in the refurbished bays. As a result, the flow and return is 45/40°C, which makes the condensing boilers very efficient. Having low setpoints allowed for low temperature radiators to be used in visitor areas, which the Trust wanted for safety reasons. A proportion of existing cast iron radiators were refurbished and reused to minimise waste. 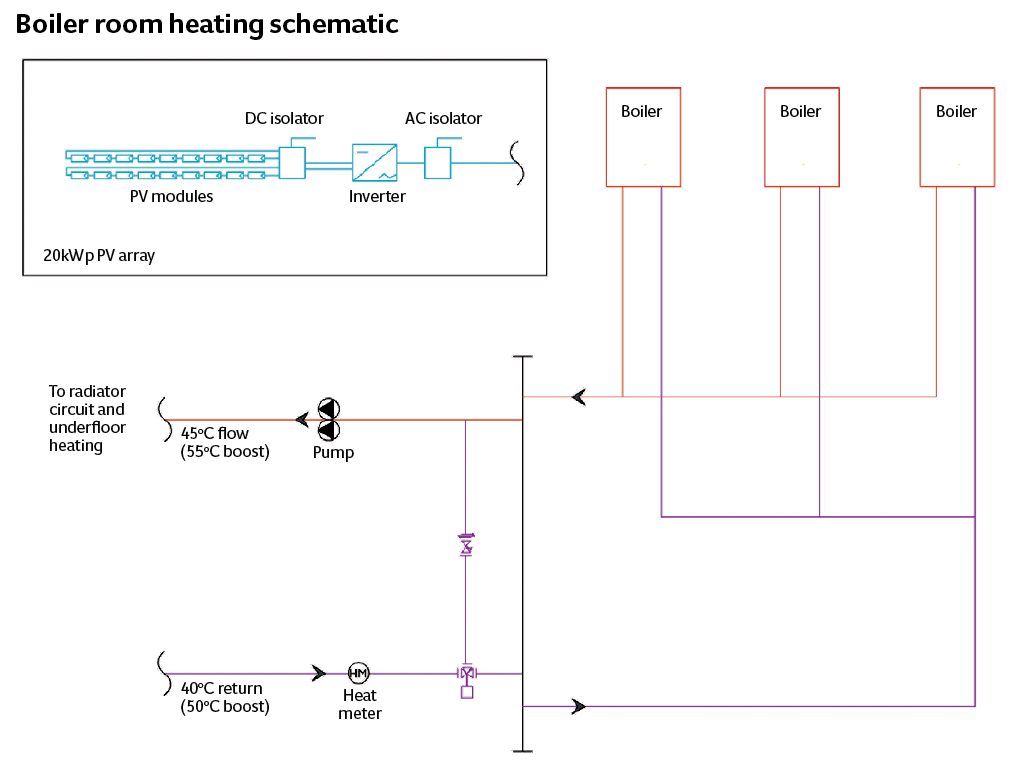 In the new bay, underfloor heating was specified because the architect wanted an uncluttered space that did not compete aesthetically with the adjoining historic bays.

In the wheelwrights’ bays, rooflights are openable to provide ventilation. This is required because the raised floor that created the viewing area for the Namur reduced the volume of the space, and because of the higher occupancy rates in the shop and café. Rooflights are not openable in the large gallery bays as the existing air gaps under doors ensure ample ventilation.

Insulation and a vapour barrier were fitted between the original rafters, and the barrier was faced with timber boarding to match original weatherboarding. Insulation was added between heated and non-heated bays.

Rooflights were either double glazed or had secondary glazing fitted. Not all the improvements were passive; on the south-facing pitched roof of the new bay there is a 20kWp PV array.

The original boiler house to the north of the shipwrights’ buildings has three Remeha Gas 110 Eco condensing boilers. These supply upto 195kW of heat to the bays and the boiler house kiosk, which serves food to the playground at the east of the boiler house. (See schematic above). The boiler house also contains CCTV equipment, the building management system, pumps for the car park drainage, and a switchpanel for car park lighting.

Ventilation for HMS Namur undercroft: Openings have been made in the original timber doors to cut heat and moisture generated by visitors

Converting lighting in the traditional fittings to LEDs in the shipwrights’ buildings was harder than expected. ‘Light levels are lower than CIBSE recommendations, partly because we found it really hard to get high output LED lamps,’ says Couch.

‘Originally we had 55W compact flourescent lighting, but of course they weren’t historic,’ he says. ‘We could not find visually acceptable compact fluorescent nor LED lamps to achieve the 200 lux light level with a sensible number of fittings. If you had a shade covering the lamp it would have been fine, but with the coolie light fitting you can see the lamp. We settled on an 18W LED and agreed a lower light level with the client.’

The attention to detail extends to the containment trays for the lighting and controls. As they were visually exposed Skelly & Couch worked closely with the architect to ensure they were in visual harmony with the historic fabric of the buildings.

The restoration of the dockyard buildings is an exemplar museum restoration. The Trust has used the renovation to greatly improve the sustainability of the shipwright buildings, while giving the public the opportunity to view one of the Royal Navy’s most historic vessels.

‘In my mind it’s good basic engineering and sustainable design,’ says Couch. ‘These are 250-year old timber buildings that have been brought up to a modern standard.’