When engineer BuroHappold Engineering and architect Hawkins\Brown were first involved in the refurbishment of the former Wates House, home of the Bartlett School of Architecture at University College London (UCL), their brief was to improve the thermal performance of the building’s 1970s single-glazed, brick façade.

The original building’s façade thermal performance was so poor that the cramped interior of the seven-storey building was too hot in summer, too cold in winter and expensive to run.

It was soon apparent, however, that the expense and effort required to improve the performance of the façade would enhance occupants’ thermal comfort, but it would do nothing to resolve the issue of the building’s cramped interior.

As an alternative, Hawkins\Brown proposed a deep retrofit, which – in addition to replacing the poor-performing façade – would extend the ﬂoor plates and reconfigure the interior, to help address the outdated learning environment while delivering better long-term value.

The proposal was to: retain the building’s reinforced concrete structure; reconfigure its layout, including the addition of a new centrepiece staircase; extend the existing ﬂoor plates outwards; build a new, full-height extension on a small area of infill land adjacent to the building; and re-clad the entire building. The additions doubled the space for teaching and research, in addition to helping tackle the building’s poor energy performance.

The deep retrofit also meant stripping out the building’s ageing mechanical, electrical and plumbing (MEP) systems, and replacing them with new, more energy-efficient systems that would enable the building to achieve Breeam ‘Excellent’.

At the same time, these systems would help maintain a comfortable environment for increased numbers of students.‘The school’s plan was to expand; it was apparent that façade replacement alone would be expensive and the school would gain nothing in terms of increased ﬂoorspace without the new additions,’ says Kenichi Hamada, an associate at BuroHappold, the project’s MEP engineers. 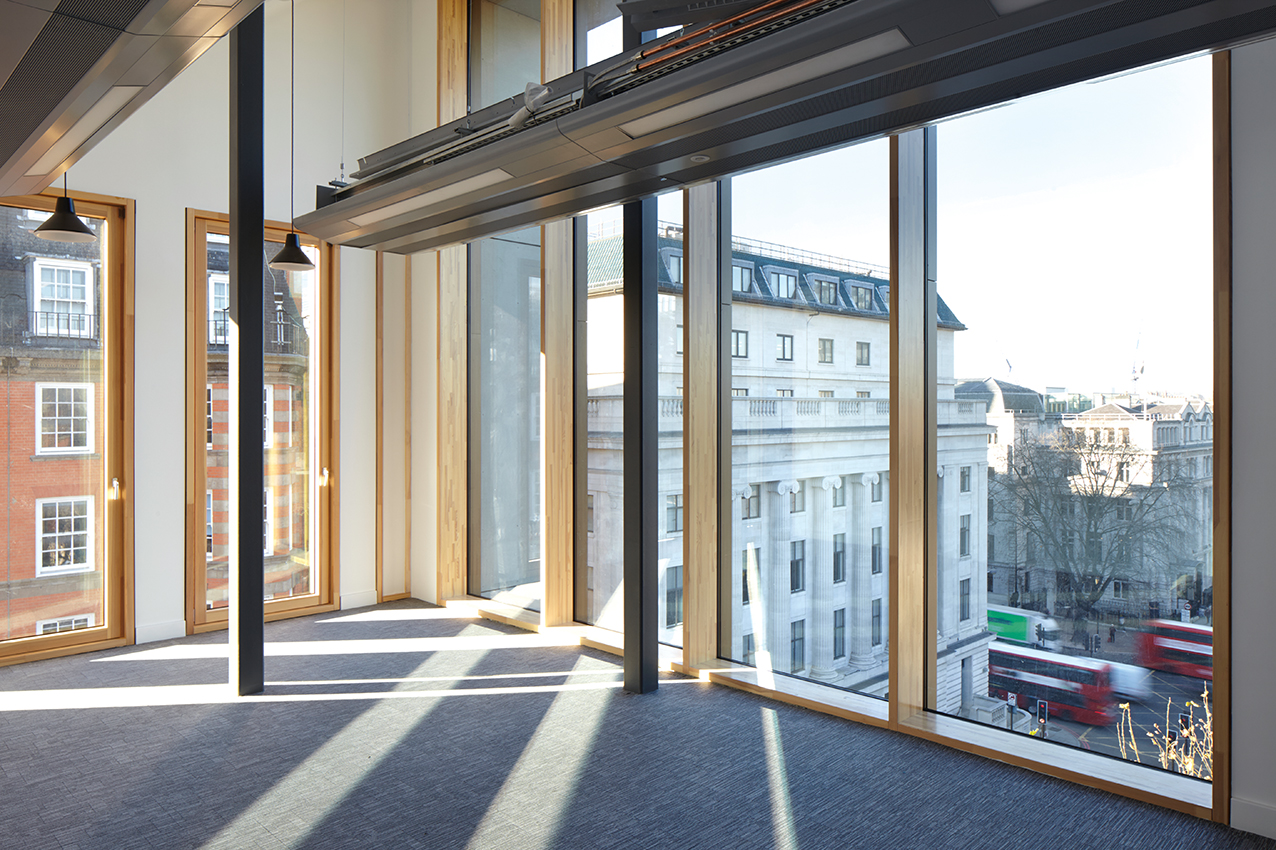 In contrast to its sleek newly clad brick-and glass-exterior, the architect wanted the interior of the £22m refurbishment to provide ‘a robust canvas for the creativity within’ – which, in engineering speak, meant it wanted the rawness of the original concrete structure to remain on view for all to see. ‘We estimate that retaining the original concrete frame not only saved money and build-time, but it also saved 400 tonnes of CO2,’ says Hamada.

The exposed thermal mass of the concrete structure and soffits provide additional thermal inertia to help guard against large daily temperature swings. The architect’s vision for a robust canvas also included the building services, which it wanted to remain exposed to complement the unadorned concrete structure and utilitarian timber-joinery aesthetic it had planned for the interior.

For BuroHappold, this meant working closely with the architect, client, students and teaching staff to develop a solution to coordinate with the building’s exposed structure. ‘The building is evolving all the time, so not having a ceiling will give it additional ﬂexibility,’ Hamada explains.

To save energy, the system is designed so that students can open windows in spring and autumn to ventilate the learning and teaching spaces naturally. A wall-mounted traffic-light system indicates when external conditions are suitable for operating the building with the windows open, and a window interlock turns off the heating, cooling and fresh air supply to the chilled beams. 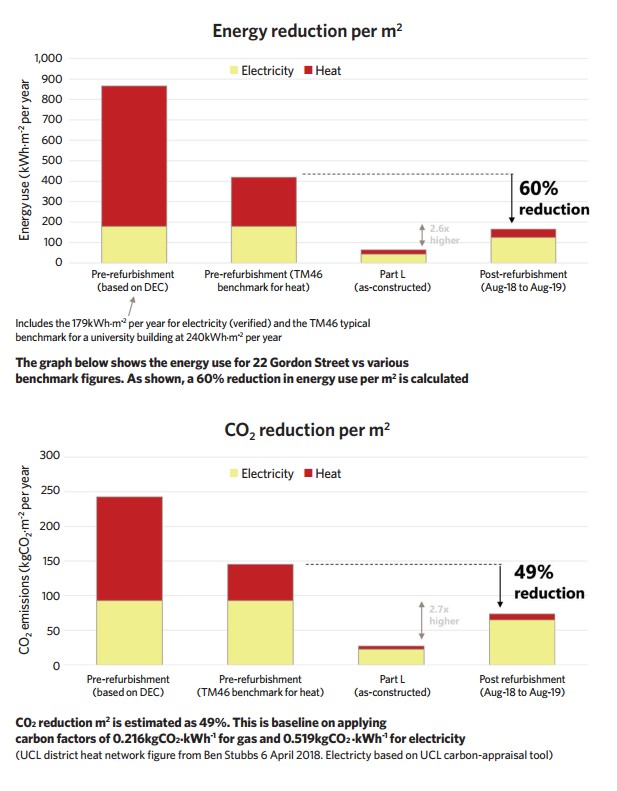 This ensures energy is not wasted by opening the windows. In summer, the multi-service chilled beams provide cooling. A roof-mounted air-cooled chiller supplies the chilled beam circuit with chilled water at an elevated temperature of 14°C ﬂow/18°C return. The raised temperature maximises the potential for the chillers to run in free-cooling mode and minimises the likelihood of condensation occurring on the chilled beams.

‘Allowing for the provision of cooling in the retrofit ensures a robust solution, where comfort levels can still be achieved when external temperatures rise as the result of climate change, without the need to retrofit inefficient cooling systems,’ says Hamada. ‘Currently, the low-energy chillers are used to maintain comfort levels only during peak summer temperatures.’

A second, roof-mounted air-cooled chiller supplies lower-temperature chilled water at 6°C ﬂow/12°C return to the fan coil units (FCUs) serving the basement workshop spaces, ground ﬂoor exhibition spaces and the entrance lobby. The chiller also supplies low-temperature chilled water to the cooling coil in the air handling unit (AHU) that supplies fresh air to the chilled beams. AHUs provide fresh air only with heat recovery and the fresh air supply rates are demand-controlled. The lower chilled water temperature to the cooling coil helps dehumidify the fresh air to maintain its dew point below the surface temperature of the chilled beams, to avoid condensation forming and dripping into the space. 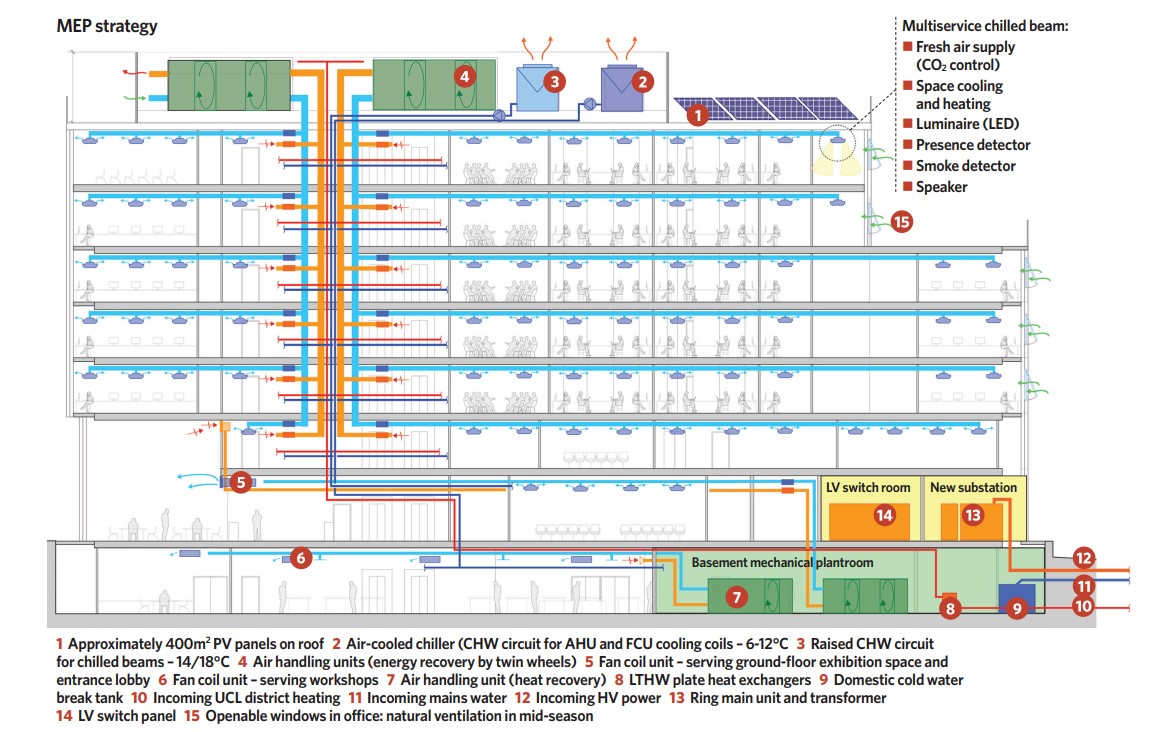 Stale air is extracted adjacent to the lift core on each ﬂoor, where the service risers are located. The air is ducted to a roof-mounted AHU. This incorporates twin thermal wheels to allow humidity to be transferred from the fresh air to the exhaust air while enabling energy recovered from the exhaust air to be transferred to the supply air. ‘The thermal wheels ensure increased heat recovery in winter and free re-heat of the supply air after it has been dehumidified in the summer,’ explains Hamada.

Heat for the building’s space heating and domestic hot water comes from UCL’s district heat network via a LTHW plate heat exchanger in the basement plantroom. ‘Our team developed a building services design that offers a ﬂexible, low-energy and comfortable environment for the occupants, which – when coupled with good levels of daylight and healthy material choices – provides healthy and productive teaching spaces,’ says Hamada. 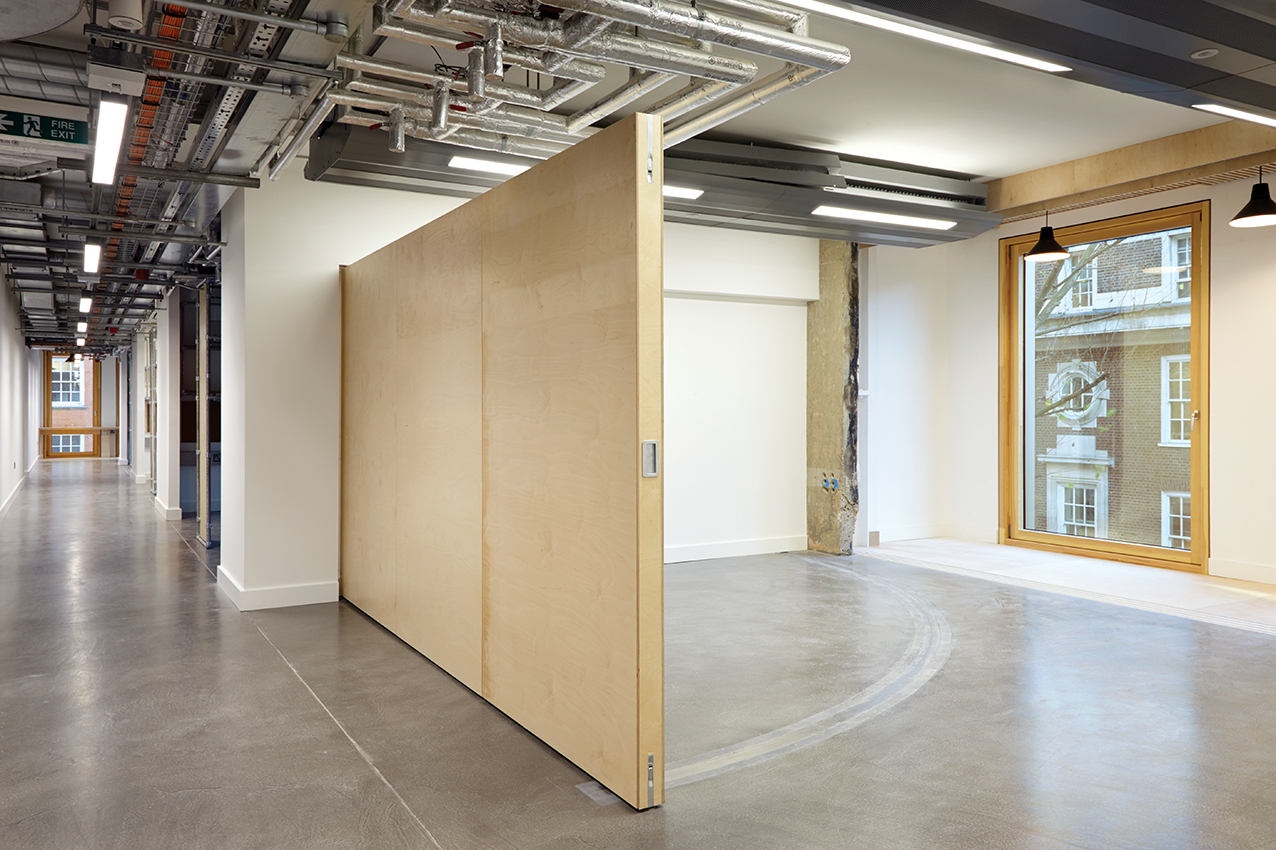 The building’s original concrete structure has been left exposed… 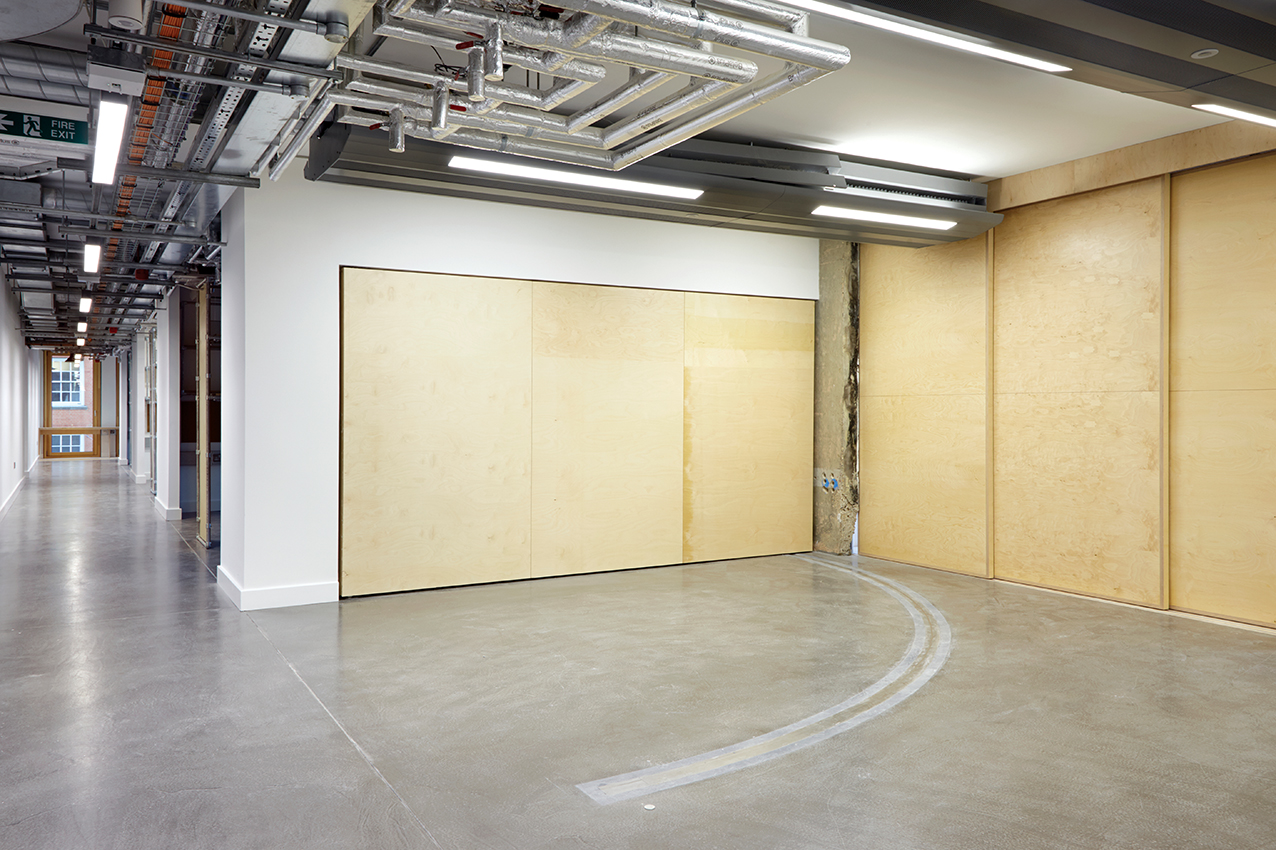 ...and the interior designed to provide ﬂexible teaching spaces

Heating and cooling loads are kept to a minimum by the building’s new façade. Its design is based on what Hamada terms a ‘passive first’ approach because of its thermally efficient glazing and the high levels of insulation. This enables it to exceed Part L 2013 U-values, even though the scheme was certified under Part L 2010. The building achieved an onsite airtightness of 8m3.h-1.m-2)@50Pa and an as-constructed EPC rating of B(41), equivalent to a 30% reduction over Part L 2010.

The building was occupied in January 2017. Seasonal commissioning was carried out in winter, mid-season and during peak summer conditions. One of the issues identified during commissioning was condensation forming on the chilled beams at a random time of day. Investigation showed that this
was down to a fault on the chiller’s control software, which meant the chilled water ﬂow temperature reset to default low temperature. The chiller was subsequently reprogrammed and is now operating at predicted design ﬂow and return temperatures. 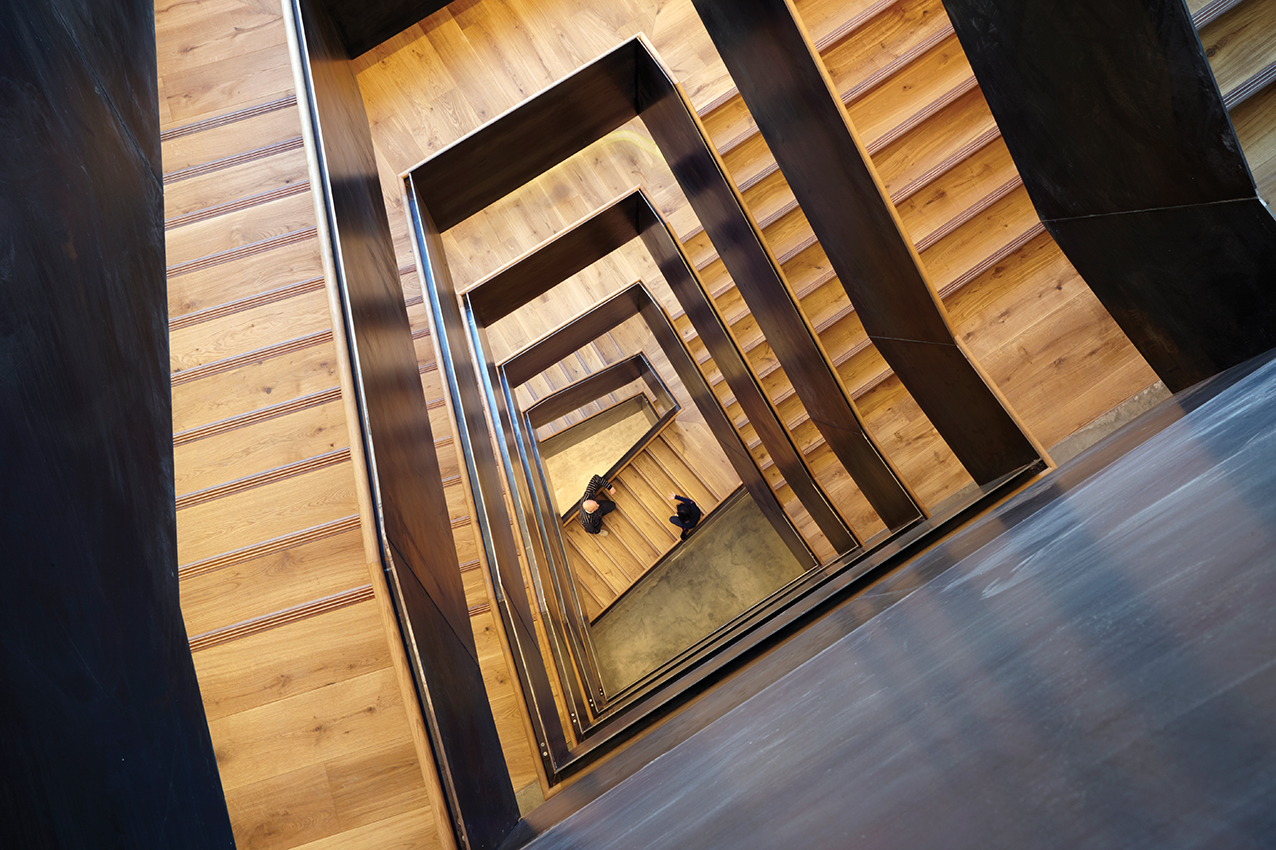 A Building Use Survey (BUS) was carried out among staff and students in April 2018, more than a year after the building was first occupied. This identified two aspects of the building performance where user comfort needed to be improved: air quality in the basement workshops, and thermal comfort on the upper ﬂoors.

BuroHappold was able to involve the students, using the building to investigate the findings further. It supervised two MSc students from the Bartlett to undertake user surveys and POE monitoring studies. (See panel, ‘Investigating comfort issues’).

Aside from these minor operational issues, the building is performing well in terms of operational energy. The Bartlett’s new home, renamed 22 Gordon Street, uses 60% less energy per square metre than did the old Wates House. This is equivalent to a 33% reduction in absolute energy use, despite ﬂoor area increasing from 5,260m2 to 8,887m2. The provision of far greater environmental control throughout the building is key. 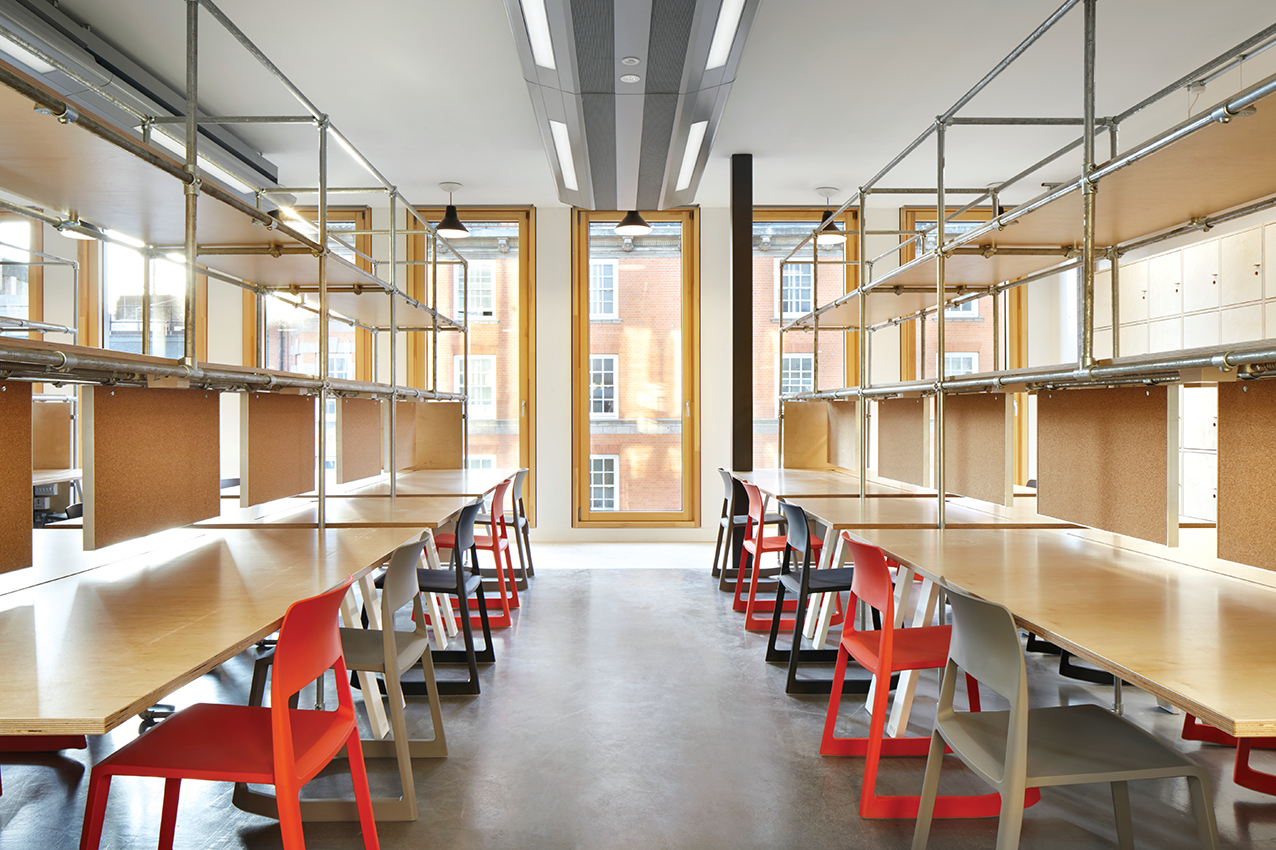 The improvement is best demonstrated when comparing expenditure on energy: in the case of the old Wates House building, UCL was spending around £136,000 on energy each year. After its refurbishment, energy costs are now around £26,000, saving the university approximately £110,000 per year.

BuroHappold’s approach to the refurbishment impressed the judges at this year’s CIBSE Building Performance Awards, where 22 Gordon Street won the Project of the Year – Retrofit category. The judges said the scheme showed ‘genuine ambition’ and they were impressed that the consultancy had ‘involved students from UCL Bartlett in the post-occupancy studies’ and with the culture of ‘performance, feedback and learning’ the team had created.

During the project’s lesson’s learned workshop, David Stevens, assistant director of the UCL Estates Project Mobilisation and Transition team, hailed it as ‘a real success’ and said it had ‘set a standard’. ‘This has all the hallmarks of good project – how to go about delivering a project and how post-occupancy can deliver lessons’. CJ

UCL researchers looked at two areas of concern highlighted by a BUS survey – poor air quality in the basement and thermal comfort issues on the upper ﬂoors. They found that the problems with thermal comfort on the upper ﬂoors were down to large numbers of students using the building at weekends – particularly when coursework submissions are due – when the chilled beams in the main building were programmed to be off.

The air quality issue in the basement was also found to be because the workshops were being used outside of normal hours, which meant the extraction systems were not always switched on.

The findings were presented to the building’s facilities management (FM) team. As a result, an interlock was fitted to the extraction system, so power to workshop equipment can only be turned on when the extraction system is activated. Similarly, it was agreed that the HVAC time controls would be adjusted periodically throughout the year to align with periods when coursework submissions are due and the building is expected to be in use for extended hours.