It was a brave decision by Transport for London to use LEDs to light the stations, escalator shafts and concourses of the new Crossrail Line (aka the Elizabeth Line). All the more so when you consider the decision was taken about five years ago, when LED technology was relatively new to the lighting mainstream.

‘The decision to go LED on Crossrail was based on industry evidence that the benefits of reduced energy consumption and maintenance requirements would deliver a reduction in whole-life costs for the project.’

Any such savings would be significant because Crossrail is a giant infrastructure project. The new railway line traverses London, east to west. Its entire central section – from Liverpool Street in the east to Paddington in the west – is underground. This made the lighting design critical, not only for passenger safety, but also as a means of enhancing their experience of the subterranean environment. The challenge for Crossrail was that many of the specialist LED fittings it needed to light the scheme had yet to be developed.

Having decided on LEDs, Crossrail set about developing the lighting concept for the station concourse areas, escalator tunnels and platforms. ‘We wanted the lighting to emphasise the spatial envelope rather than draw attention to the luminaires themselves,’ says Kerrigan.

As a result, the concept uses the light-grey, matt-textured, glass-reinforced concrete lining of the station and escalator tunnels to reflect light onto the passenger areas, to ‘create a sense of spaciousness within the underground environment’ Kerrigan explains. 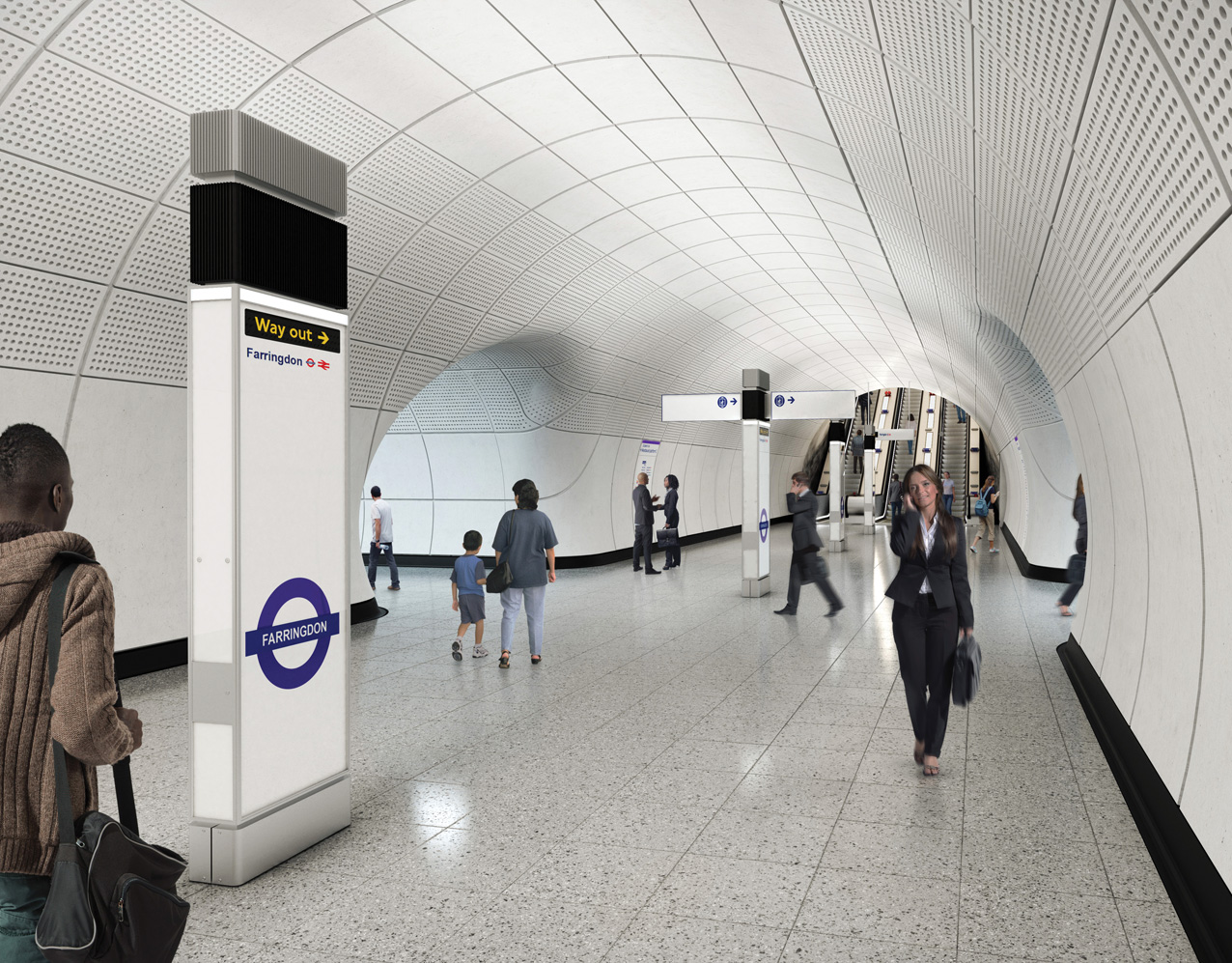 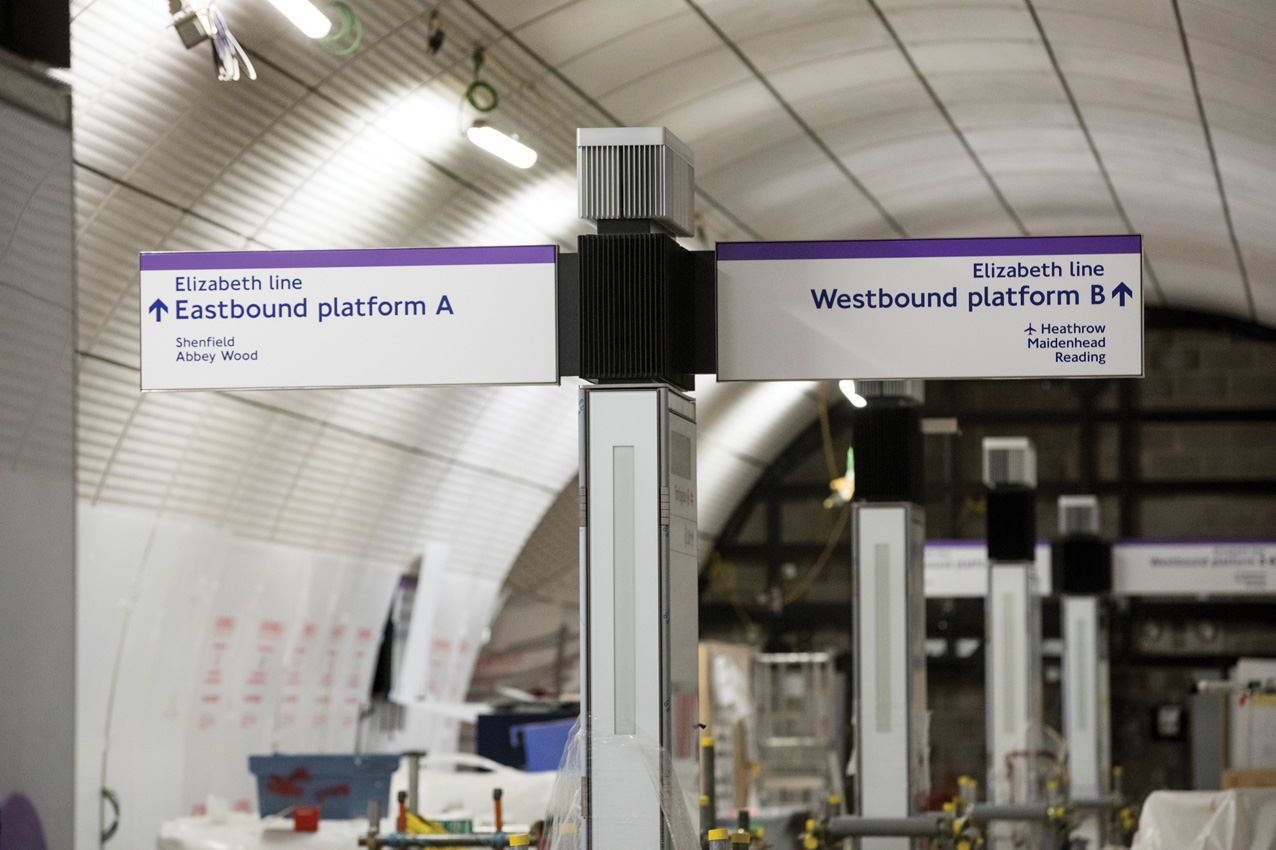 Light levels for Crossrail are defined by London Underground’s task-based Lighting of Underground Assets Document. Minimum levels vary from 200 lux on the horizontal plane at the point where passengers step on and off trains and escalators, down to 100 lux on the vertical plane, to enable passengers to read display information.

The illuminance also has to be relatively consistent, with a uniformity figure of 0.75 at the stepping-off point on the escalators, down to 0.4 for general illumination of the concourse circulation areas. In addition, to improve safety and passengers’ visual experience, London Underground requires all lighting to have a colour-rendering index of 80 (RA) or above.

To simplify maintenance, Crossrail wants each luminaire to be unpluggable for simple replacement. In the case of the platform edge screen lighting, it also wanted the printed circuit boards containing the luminaire’s LED chips to be easily removable, to allow the boards to be exchanged without having to remove the body of the light fitting.

Only light fittings made using materials that meet the requirements of London Underground’s Fire Safety Performance of Materials document – developed after the King’s Cross fire in 1987 – can be used. ‘The fire-safety requirements tend to be more onerous than those of the British Standard,’ says Kerrigan. To help manufacturers, Crossrail holds a register of materials deemed suitable for subterranean applications. It was a requirement that proved extremely onerous when it came to the selection of luminaires, because most incorporate polycarbonate diffusers, which is an excluded material.

Alongside day-to-day lighting, Crossrail wanted many of the fittings to incorporate emergency and escape-route lighting to comply with BS 5266, as well as London Underground’s enhanced requirements for lighting-circuit resilience and fire survivability in a sub-surface environment. ‘The emergency lighting has a consistent value of 15 lux across all areas in stations shafts and portals,’ says Kerrigan.

”Cables had to be LUL compliant, as did the bonding materials for the glass and even the screws. The luminaire was also subjected to bomb-blast testing”

Emergency escape and exit lighting must connect to the emergency lighting UPS system, to ensure illumination is continuous during a mains failure. The UPS system has been designed with a battery life of three hours in all areas – a length of time selected not because it is expected to take the public three hours to escape, but to ensure sufficient light after an incident to give emergency services time to search for casualties.

London Underground’s requirement for emergency lighting is that every third fitting is connected to the UPS, but this minimum is exceeded in areas where more fittings are required to meet the 15 lux light level. To maximise resilience, emergency-lighting circuits are interleaved so that adjacent luminaires are fed from different emergency distribution boards.

The difficulty with being the first major subterranean infrastructure project to be lit by LEDs is that very few suitable LED fittings met Crossrail’s specific requirements. Crossrail defined four luminaire types for specific applications, then turned to lighting manufacturers to develop them. These were the totem, the recessed escalator light, the cross-passage lighting service boom, and the platform edge screen light box. ‘We’d established the concept, but we didn’t know whether they would work, because we hadn’t prototyped any fittings,’ says Kerrigan. 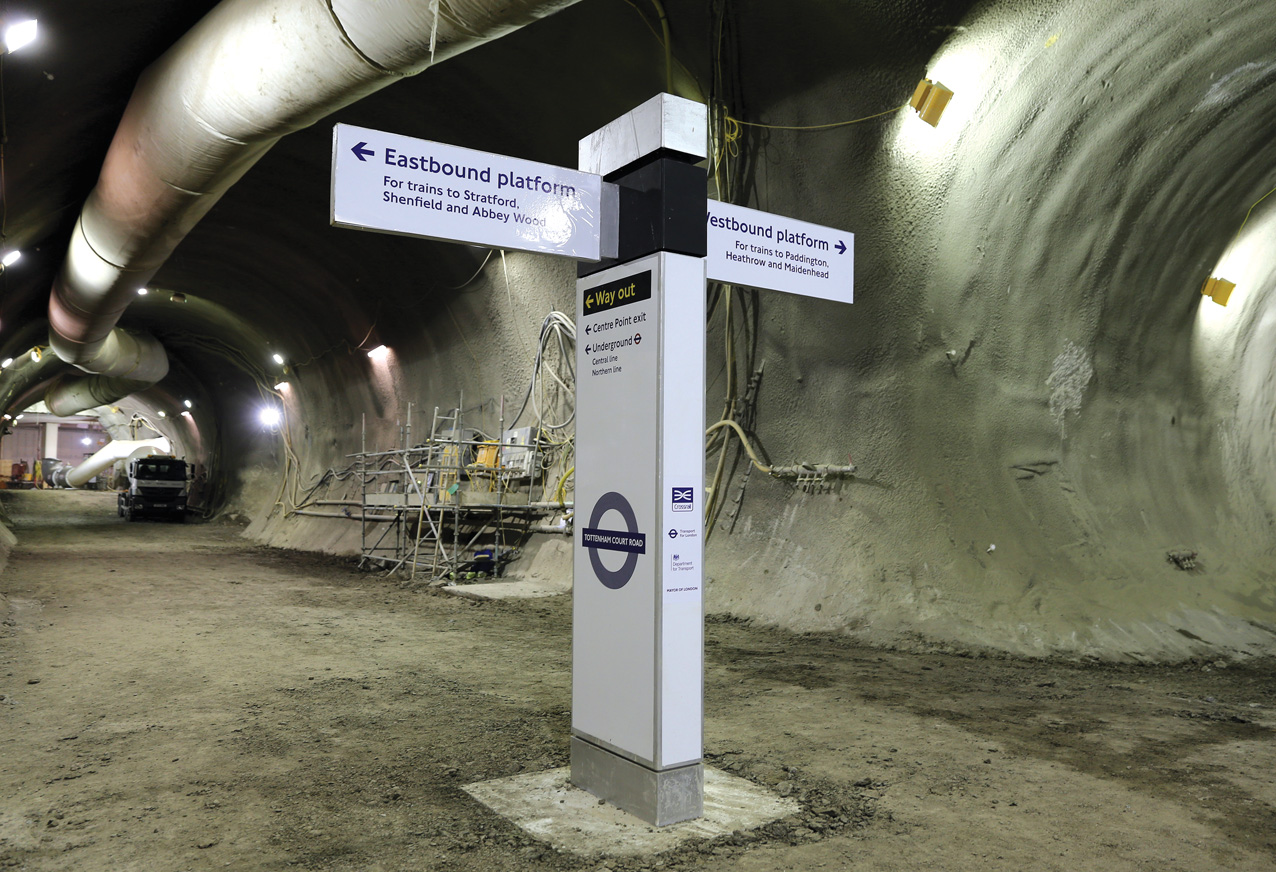 A prototype of the Ikon uplighter mounted on the totem

One of the lighting manufacturers that Crossrail used for the specialist LED fittings needed was Future Designs. It developed the luminaire for the totem uplighter and the six associated emergency light fixtures contained within. The totem is the primary source of light on the lower concourse. It is a 2.1m-high unit that combines signage with a high-powered LED uplighter, to bounce light off the tunnel’s glass-reinforced concrete walls onto the concourse floor. It also incorporates emergency lighting, fire alarms and public help points.

‘The starting point was to develop an LED uplighter with sufficient output to satisfy Crossrail’s minimum level of 150 lux on the concourse floor,’ says Leon Ellis, technical director at Future Designs. ‘We do all our design in-house; to develop the uplighter, we used a programme that simulated the light distribution.’

The solution that was developed incorporates a chamfered edge to the LED printed circuit board (PCB). ‘The curved design gave us as wide a spread of light as possible; we tweaked the chamfer to get the right amount of light directed to the ceiling.’

The ‘Ikon’ uplighter developed for mounting on top of the totem has a light output of 60,000 lumens, which is considerably more than the 5,000 lumens that a typical uplighter used in an office might be expected to produce. ‘Its comparable to a 700 watt conventional fitting,’ says Ellis.

This fitting uses linear strips of LED bulbs mounted on a standard PCB. ‘The problem with it being an uplighter is that heat rises, so the heat coming off the LEDs had to be dissipated to prevent the ambient temperature from reaching 80°C and the LEDs from failing.’ 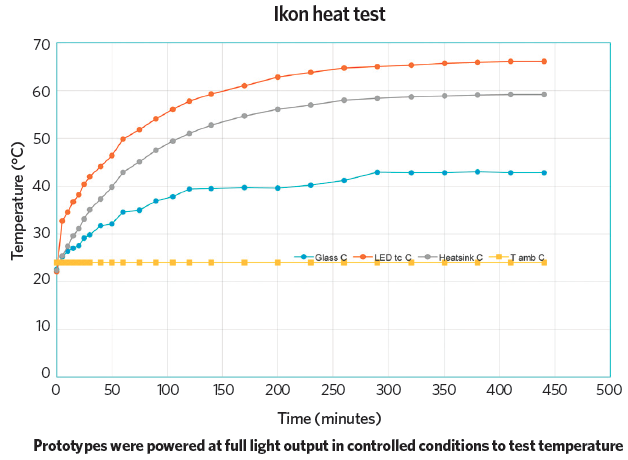 Blowing air across the units was not an option because Crossrail did not want them to incorporate any moving parts. So a solution was developed using an array of heat sinks to draw the heat away from underneath the LEDs, limiting the ambient temperature to 35°C to maximise the life of the LEDs.

‘We’d used software to model the light output, but we couldn’t model the heat – we had to physically test the prototype units,’ says Ellis. ‘We built prototypes and powered them at full light output in controlled ambient conditions, until temperatures stabilised in the unit, to demonstrate it worked in line with the design. We then left the prototype running in these conditions for three months, taking a temperature reading six times a day.’

In addition to proving the heat-management system worked, the mock-up showed that glare from the uplighter mounted on top of the totem was more of an issue than had been predicted. ‘Crossrail was always concerned about glare from the uplighters for people on the escalators, because they are so bright,’ says Anouska Nemchand, head of design at Future Designs.

It’s a point picked up on by Ellis: ‘Crossrail thought the problem would be confined to the first totem, but you can potentially see the top of the second and third,’ he says. 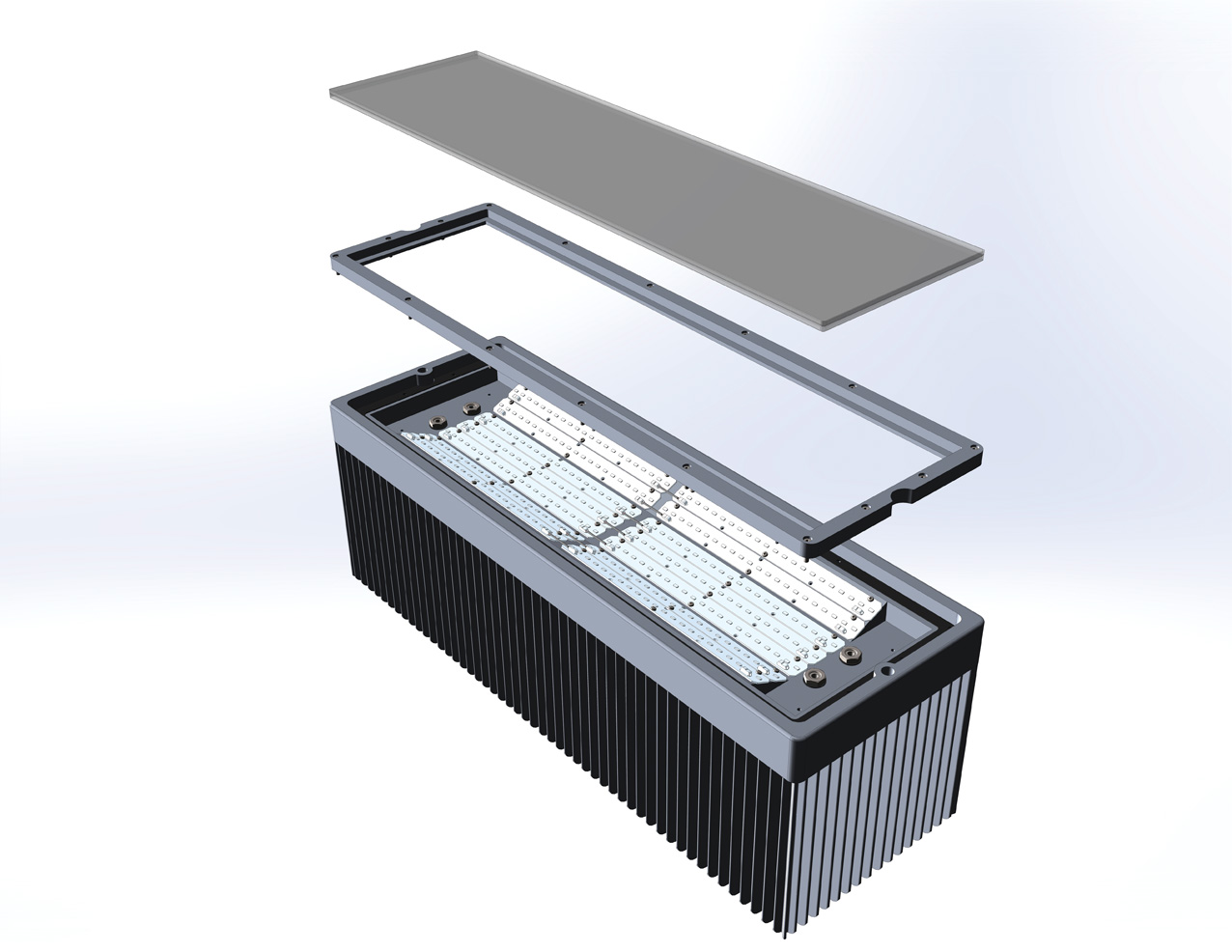 The solution was to fit a very fine blind of angled metal fins between two layers of glass that form the top of the units, close to the base of any escalators. ‘There is a reduction in lumen output, but it negates the possibility of passengers momentarily being blinded coming down the escalators,’ Ellis says.

‘We also etched the glass; putting a slight frosting on it helped to soften and spread the light slightly,’ Nemchand adds.

As with all products intended for use on Crossrail, the luminaires were not allowed to incorporate any combustible components and materials. ‘All cables had to be LUL compliant, as did the bonding materials for the glass and even the screws we used – we had to give a breakdown of every component and what it’s made from to get approval,’ says Ellis. The luminaire was also subjected to bomb-blast testing.

The final version of the luminaire measures 750mm x 250mm x 250mm and weighs 80kg. It was installed on a totem and trialled at Tottenham Court Road and Farringdon stations, where it passed with flying colours. In most Crossrail stations, the totems will be spaced at 9m intervals within the 8.1m diameter tunnels, to give a consistent light level onto the floor of 150 lux and 0.5 uniformity. If a luminaire fails, it can simply be unplugged and replaced, with the failed fitting returned to the manufacturer for repair in the correct controlled environment for solid state lighting.

‘You can see into the deck light fitting as you move past it on the escalator, so our brief was to develop a light to sit in the deck of the escalator that punched out an awful lot of light with zero glare,’ says Kerrigan.

The design is unique in that it offers a high level of light output – 50,000 lumens – while glare is virtually eradicated. To achieve this, the LED light engine has an optical arrangement comprising three layers of diffusion to provide a homogenous uniform appearance with a 70-degree beam angle.

‘As you go down the escalators, you won’t realise the lamps are on because the louvre prevents you from seeing the light,’ says Nemchand.

As with the totem light, the biggest challenge was to overcome was getting rid of the heat from the LEDs. ‘It took us nearly two and a half years to work out a means to get rid of heat by drawing it downwards to a series of heat sinks,’ says David Clements, managing director at Future Designs. ‘It is the most difficult product we’ve ever developed, because LEDs are still so new.’

The luminaires are big. The units are 1,500mm long, 305mm wide, and weigh 85kg, and are spaced at 1,870mm centres along the length of the escalator deck. In addition to the LED PCB, the units contain the LED control gear. ‘If anything fails, the whole light fitting is removed and returned to the manufacturer.

The fitting is intended to be removed by two operatives standing on a stopped escalator. Currently, it costs London Underground approximately £1,000 per tube to replace a lamp in a fitting above an escalator.

‘Most fittings are above the escalators and are only accessible from scaffolding, which has to be erected in engineering hours – so we were determined never to put lights above escalators on Crossrail,’ says Kerrigan. ‘This is probably the cleverest light fitting on the whole of Crossrail.’ 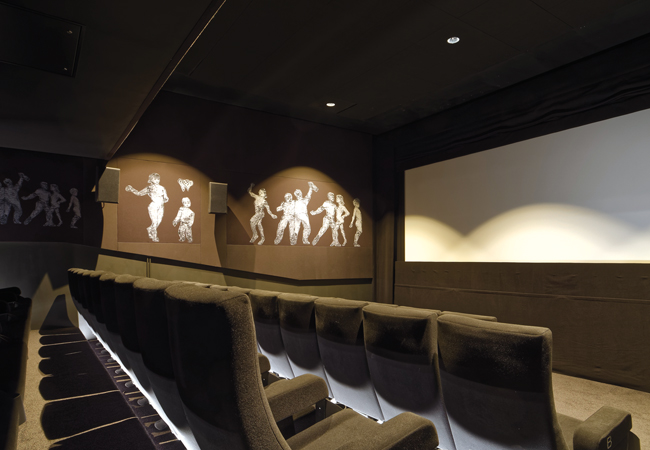