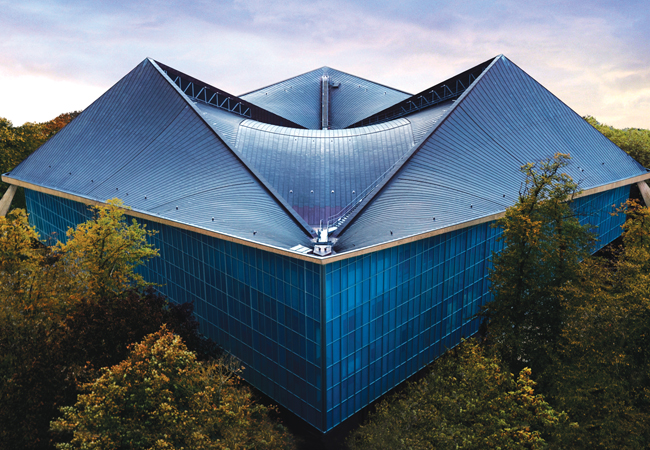 The 1960s, concrete former home of the Commonwealth Institute has been given a new lease of life as the site of the Design Museum. The building, in west London, retains its distinctive saddle-shaped roof but, beneath the copper-covered, hyperbolic paraboloid hat, the interior has had a radical makeover by architectural designer John Pawson.

The entire internal structure is new. Pawson’s pared-back design is arranged around a giant, oak-lined atrium, which is open to the roof. Two generously proportioned galleries have been created on the ground floor and on a newly excavated lower-ground floor, to house temporary exhibitions. Flights of wooden steps, meanwhile, lead visitors through the atrium to the upper floors, containing a gallery for the museum’s permanent display, a library, a restaurant and a members’ room.

The problem for ChapmanBDSP, the project’s building services engineers and lighting designers, was to develop a flexible services solution that complemented Pawson’s minimalist interior, while also offering a comfortable environment for visitors that meets the requirements of Breeam Very Good.

‘Servicing a building with “invisible” services was the most challenging aspect of this project,’ says Phil Parkes, a director at ChapmanBDSP. ‘It meant the design had to be progressed in far  more detail than is usually required at each stage, to ensure the architectural details were not compromised.’

The engineers were appointed in late 2010 and, because of the complexity of the base build – which included supporting the roof from a temporary structure while the existing interior was removed – they benefited from having additional time to ‘bottom out’ design details with the interior designers. ‘The internal engineering services had to be invisible – behind acres of immaculate, plastered ceilings – but remain accessible for maintenance, so the interior designer was very involved in the details of all visible elements of the design,’ says Parkes. 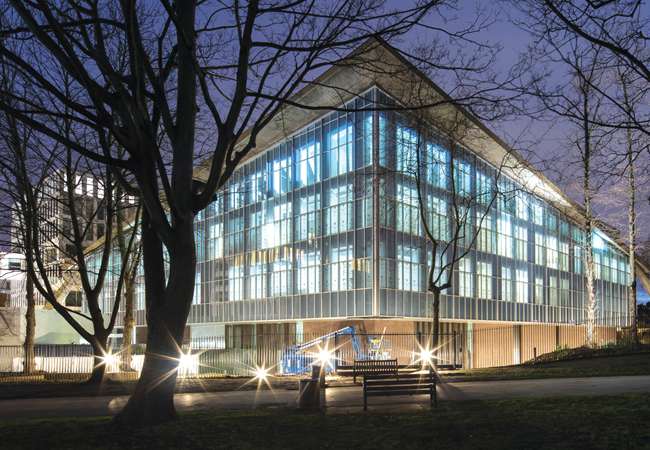 Heating, cooling and fresh air are supplied to the gallery spaces via a displacement ventilation system. ‘Traditional ventilation systems, which supply air at high level, normally require exposed air terminals,’ says Parkes. ‘This was not an option for the designer, who wanted clean, clear finishes’.

So instead, a false wall was created to conceal the vertical supply ducts, which drop down from the ceiling void above. The bottom section of this wall is designed to act as a supply air plenum, to distribute the air evenly along its length.

‘Gallery ventilation and cooling is delivered via a displacement ventilation system to each of the three main exhibition spaces,’ says Parkes. ‘However, with floors having to be capable of supporting anything from a Formula One car to a JCB digger, this had to be fed within perimeter walls and supplied via continuous, skirting-level shadow gaps [space between the wall and floor].’

In the galleries on the ground and lower-ground floors, air is extracted at high level through discrete openings in the ceiling. However, for the museum’s permanent-display gallery on the upper-most floor – which has no ceiling – extract ductwork is discretely located above the ceilings of the rooms surrounding it.

‘The displacement system works, as it combines meeting the demands of a minimalistic interior design approach – with the need for a flexible space – with varying fresh air and cooling requirements,’ says Parkes, who adds ‘Strict humidity control was also required by potential exhibitors.’

The galleries’ air handling units (AHUs) are designed to maintain temperatures at 22°C +/- 2K and at a humidity level of 40-60%, largely in line with CIBSE Guide A1, 2015. However, there is no attempt to control humidity in the upper-floor gallery, which is open to the atrium. Instead, ChapmanBDSP agreed with the museum that, if any moisture-sensitive items were exhibited, these would be housed in an environmentally controlled display case.

Each gallery is served by a dedicated AHU located in the building’s basement. Generally, supply and return air ducts are routed at high level through the double-height basement and up through the building via vertical risers at either end of the museum. ‘The building’s listed façades and roof mean that the main ventilation intake and exhaust are located in the ground, with a large intake plenum on the south side of the building and a similar exhaust plenum on the opposite side,’ Parkes says.

Each of the seven AHUs is individually connected to the plenums, as are the smoke-extract systems, which are located in a common basement plantroom. ‘Coordination was extremely challenging, bearing in mind the design was completed before the common uptake of 3D-drawing packages within the industry,’ he adds. 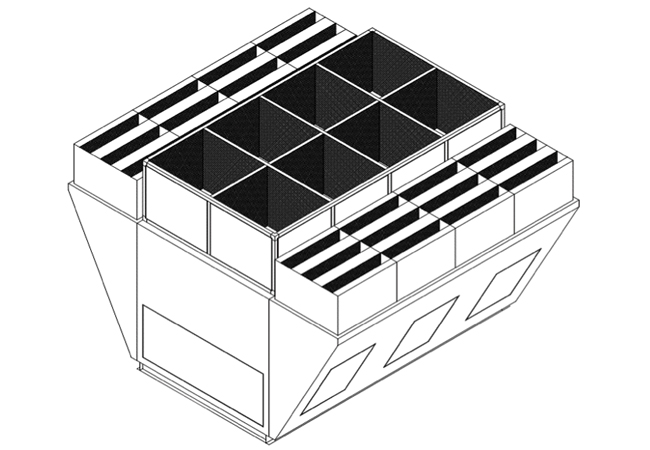 Heat is delivered to the AHUs via two heat exchangers, which connect to a district heat network. As a result, the building has no boilers. ‘The museum benefits from an LTHW connection off the local district heating main, which is also used to serve the surrounding residential development,’ says Parkes. ‘The same residential development also provides the grey water used to flush the toilets in the museum.’

People and lighting are the main cooling loads in the galleries. The chilled water supply to the AHUs is from two 400kW air-cooled chillers, which are hidden in an 8m-deep pit in the external landscaping, because the building’s listed status prevented the engineers from installing ventilation louvres in the façade or the roof. The chillers are linked to the main basement via pre-insulated flow and return pipework and armoured supply cables, which are buried below the landscaping. ‘I’ve never put chillers into the ground like that before,’ says Parkes.

Because of their proximity to the nearby residential development, the chillers are fitted with acoustic attenuation (see sketch above). The only modification needed to accommodate this was in the design of the acoustic attenuators.

‘Acoustic attenuation was critical, as the museum is surrounded by the new Holland Green residential development. A strict noise level of 49dBA at 1m was achieved, while maintaining only vertical air movement on and off each chiller due to their buried arrangement,’ Parkes explains.

While displacement ventilation is employed in the galleries and in the basement auditorium, fan coil units (FCUs) are used to maintain comfort conditions in all of the other rooms. ‘Fan coil units provide the ideal solution for this building – they are compact, easy to conceal and have the capability to cater for a wide range of loads,’ says Parkes. ‘Each area required a slightly different environmental approach and added to the complexity of the MEP jigsaw puzzle – albeit that the one common factor throughout is the minimalist interior design and the desire for “invisible” services.’ 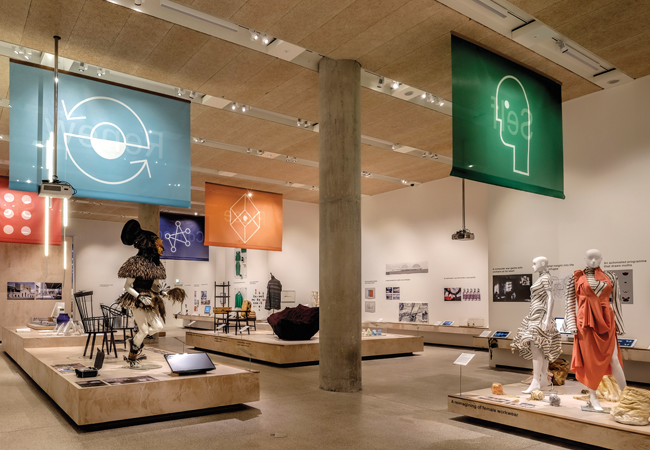 Flexibility is the key to ChapmanBDSP’s lighting solution for the two big exhibition spaces on the ground floor and the newly excavated lower-ground floor. ‘The scheme has been developed to complement architectural designer John Pawson’s reconfigured minimalist interior aesthetic, and to be flexible enough to be adapted by the Design Museum to illuminate its future exhibitions – whatever they may be,’ says Graham Large, head of architectural lighting at ChapmanBDSP.

The systems for both spaces make extensive use of lighting tracks and LED spotlights. ’Because exhibitions will change quite regularly, the client was adamant that we use a solution based on spotlights incorporating on-board dimmers,’ says Large. It is similar to the system in the museum’s previous premises, which enabled the focus and light level of each spotlight to be set without having to refer to the lighting control system.

The LED spotlights have a fixed colour temperature of 3,000K, chosen to complement the museum’s pale, oak-panelled walls and to work with the objects exhibited. ‘We discussed the use of variable white light with the Design Museum, but – on the basis of the additional level of control required – it was agreed to work with a single colour temperature,’ says Large.

The designers were also freed from the constraints of having to control the UV content of the lighting system because, adds Large, ‘very few exhibits will be fugitive material, such as short-life printed pamphlets or images’. ‘We’ve used LEDs throughout the gallery so there is no forward UV content; however, if the museum does have a fugitive picture, for example, it can isolate this within the exhibition and light it gently – say, at a maximum of 50 lux – by using the spotlights’ on-board dimmers.’ In addition, the track-and-spot system incorporates linear LED fittings, primarily to provide light for the cleaners and for when the exhibitions are being set up – but they can, if necessary, be used as supplementary lighting for exhibitions.

The museum’s oak-lined atrium is ringed by walkways that lead visitors up towards the spectacular curved roof. Credit: Hufton+Crow

The track-and-spot solution also features in many of the museum’s reconfigured interior and circulation spaces, arranged around the building’s spectacular oak-lined atrium (see panel ‘Museum lighting – worth the hyperbole’). Lighting in the Members Bar and in the restaurant areas on the second floor have a colour-tuneable system for the downlighting. ‘This creates a cooler environment during the daytime, cross-fading to a much warmer ambience for late afternoon and evening use,’ Large says.

The lighting fixtures and the luminaire/blind control system were supplied as a package by Concord Lighting, and ChapmanBDSP’s scheme has ensured that the Design Museum is now also a showcase for contemporary lighting design

‘There were a lot of challenges in meeting the requirements of the client, planners and a very exacting architect,’ says Parkes. ‘Personally, it has been one of the most intense and challenging experiences on a single project – more than five years from feasibility to completion – but being at the opening [in November] made it all worthwhile; realising exactly why the architect had been so unswerving in his attention to detail.’

Museum lighting – worth the hyperbole

The building’s square-shaped atrium is the focus of John Pawson’s design for the interior. It is ringed by walkways that take visitors up towards the curvaceous roof and the Design Museum’s other attractions, including its restaurant, library and education spaces. The additional lighting allows the circulation spaces also to be used as exhibition areas.

Windows ring the atrium to throw daylight onto the building’s spectacular roof, which dominates the space. ChapmanBDSP carried out daylight studies to ensure the natural light could be controlled, particularly when the atrium is used to house exhibitions. Daylight levels and glare are managed using motor-driven blinds, operated by the building’s Lutron lighting control system. With the blinds raised, daylight accents the giant roof throughout the day; after dark, it is lit using artificial light.

Pawson’s design for the interior ensures that the entire roof is visible, including the structural beams that support it. ‘The roof has been lit subtly, as we were very conscious that it does not need a lot of help – it already commands visitors’ attention,’ says Large. ‘Our aim was to showcase it to ensure it does not overpower the atrium’. Twelve projectors – six on either side – illuminate the underside of the roof, and there is a row of linear LED battens around its perimeter. The main roof-supporting columns are uplit from floor-recessed, adjustable projectors, fitted with egg-crate louvres to help control glare.

‘The parabola roof has a matt-concrete finish that soaks up light, so we had to use projectors that would normally be used to illuminate building façades,’ says Large.

Each projector has 96 LED heads and two different beam angles are used – 15 and 30 degrees. Both types are fitted with barn doors to prevent light spillage. The projectors provide a single-colour light, with a colour temperature of 3,300K. ‘That gave us the benefit of a warmish colour and plenty of output,’ says Large.

Alight here for Crossrail – lighting design on the Elizabeth Line