The first 10 homes in the UK to be refurbished under the Dutch Energiesprong initiative could not have been given a sterner test. The retrofit of properties in Sneinton, for social landlord Nottingham City Homes (NCH), was completed just before the ‘Beast from the East’ hit in February and March, bringing heavy snowfall and unseasonably cold temperatures to the UK.

‘The Siberian blast is not the test I would have volunteered for,’ says David Adams, technical director of developer Melius Homes, which won the construction tender to build the homes, While the temperature outside was -4°C, however, Adams reported a ‘remarkably stable’ 20°C inside.

Energiesprong gives homes a 30-year warranty. If they fail to perform as the design intended, the contractor is liable to a financial penalty

This was a striking turnaround for residents; before the retrofit, they had to spend £1,300-1,400 a year to adequately heat their poorly insulated homes, according to Adams. As a result, some residents didn’t turn on their heating, while others limited it to the living room. ‘For a social tenant, the high energy costs made the homes pretty much unheatable,’ says Adams.

The housing – a terrace and three bungalows – was earmarked for improvement by NCH, which had the option of demolishing and rebuilding them for £120,000 per house or finding a way of refurbishing them at a reasonable cost. This is where Energiesprong (Dutch for ‘energy leap’) came in.

In The Netherlands, 1,000 homes a year are built or retrofitted using the Energiesprong model. It is as much a funding mechanism as a housing standard, and is designed to unlock finance for new-build and existing homes.

Energiesprong homes are designed to pay for themselves over 30 years. The idea is that one-off retrofitting costs are paid for by the subsequent reduction in planned maintenance and energy bills – cuts to the latter being passed on, in part, to the landlord.

Adams is upbeat about the early performance of the homes in Nottingham. Data shows that the retrofit – based around prefabricated external insulation, a community energy centre, photovoltaic (PV) and battery storage – is performing as well as his models had predicted. (See panel, ‘The design’.)

This was vital to Melius because, at the heart of Energiesprong, is a performance contract with the developer that gives homes a 30-year warranty. If they fail to perform as the design intended, the contractor is liable to a financial penalty. 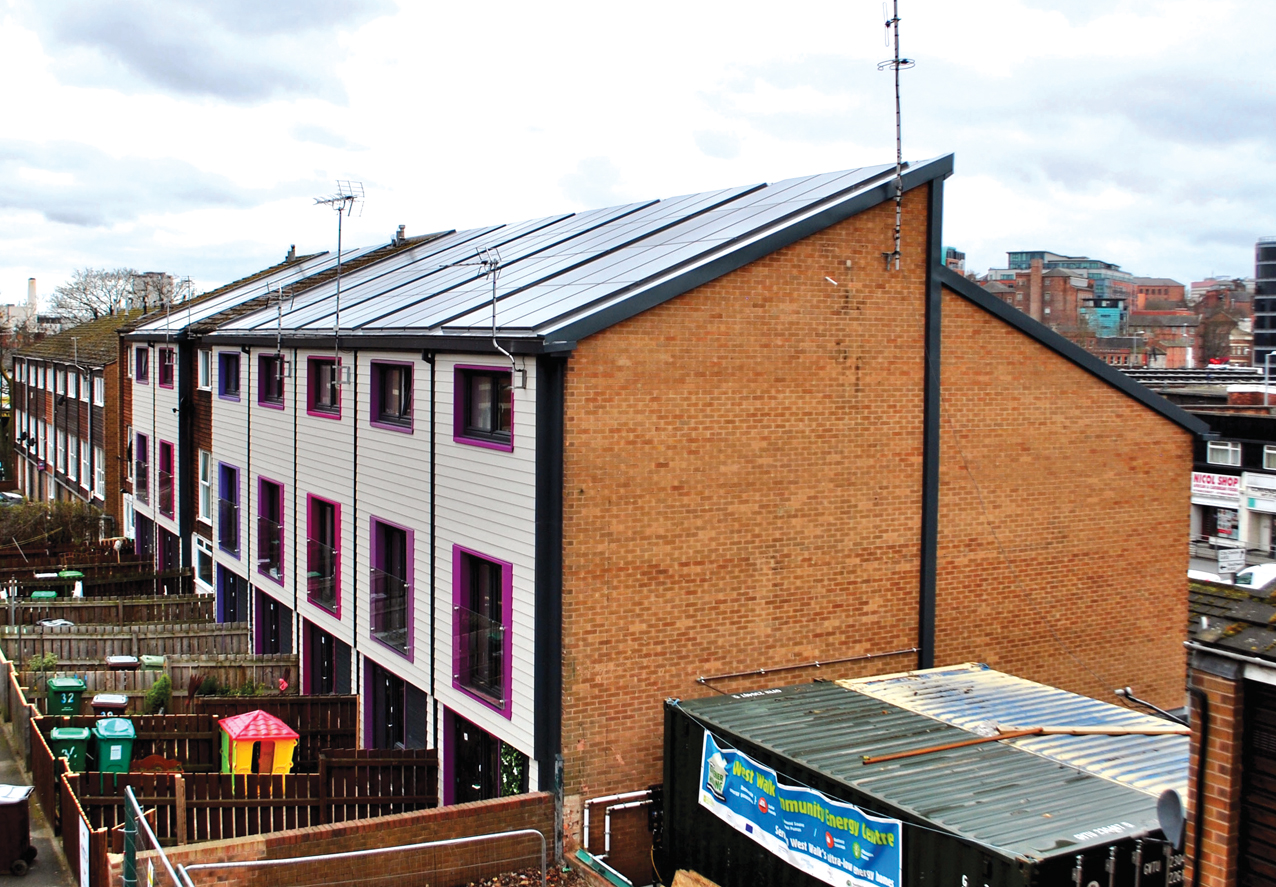 The stepped-down asymmetric roof, with the shipping container housing the energy centre visible at the bottom of the picture

‘It’s normally always the client risk, and they have very little control of the construction process,’ says Emily Braham, head of sustainability at NCH. ‘It’s right that the risk sits with those installing and designing the homes. It makes it more complicated for the contractors, particularly as there is little evidence of how things work.’

‘Energiesprong looks at real-life performance over a long period, not just modelled performance,’ says Nicholas Doyle, who is part of the marketing development team at Energiesprong UK, as well as a director at Adecoe, an energy and environmental consultancy. ‘The fundamental thing we are trying to change is that the desired outcomes are delivered to the tenants.’ 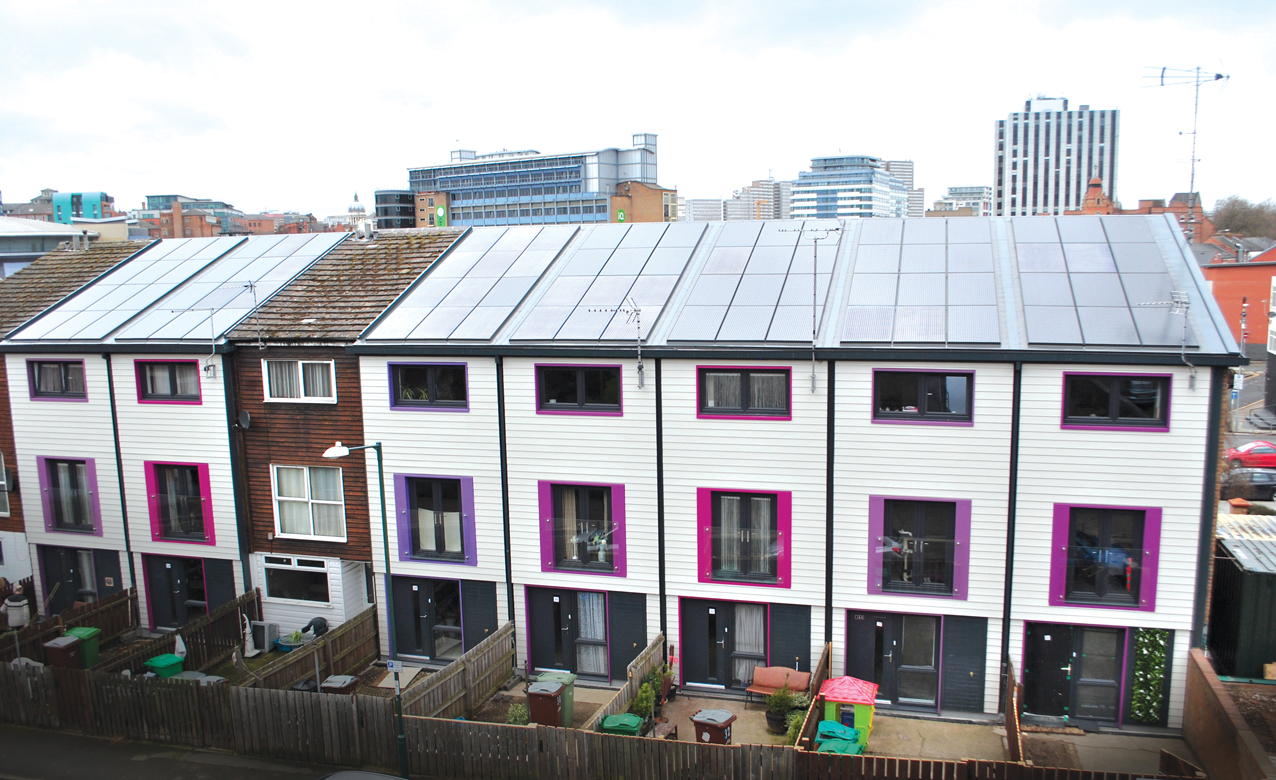 The stepped-down asymmetric roof, with the shipping container housing the energy centre visible at the bottom of the picture

Energiesprong specifies performance outcomes, which means development teams are not tied to any particular system or design’ (see panel ‘Sneinton pilot outcome targets’). In The Netherlands, the targets include the requirement that all energy use – including plug-in appliances – must be net zero carbon.

At Nottingham, PVs are helping to get electricity imported from the grid down to 1,500kWh/year per home. There is an overall allowance of 2,300kWh/year for households, which includes tenants’ own energy use. Adams says the space for PVs on dual mono-pitch roofs made it impractical for enough electricity to be generated to achieve net zero.

Tenants can be expected to pay a £300 total energy bill if they use 2,300kWh of electricity and 140 litres of hot water per day, and heat their homes to 21°C in the living room and
18°C in other rooms. Tenants also pay a £300 energy plan charge, of which a proportion will go back to NCH to help pay some of the costs of the retrofit.

After putting the contract out to tender, NCH compared contractors on quality and whole-life cost, rather than capital costs. ‘We think bidding on capital costs drives the wrong behaviour and, ultimately, the wrong decision,’ says Braham.

‘The quality part of the tender was how well they met the design brief, and the price element was the whole-life cost and the income the homes could generate.’

Each bidder had the opportunity to present its proposals to tenants. ‘The tenants liked the fact it was focused on them, and the bidder that won was more engaged with what the tenants thought,’ says Braham. 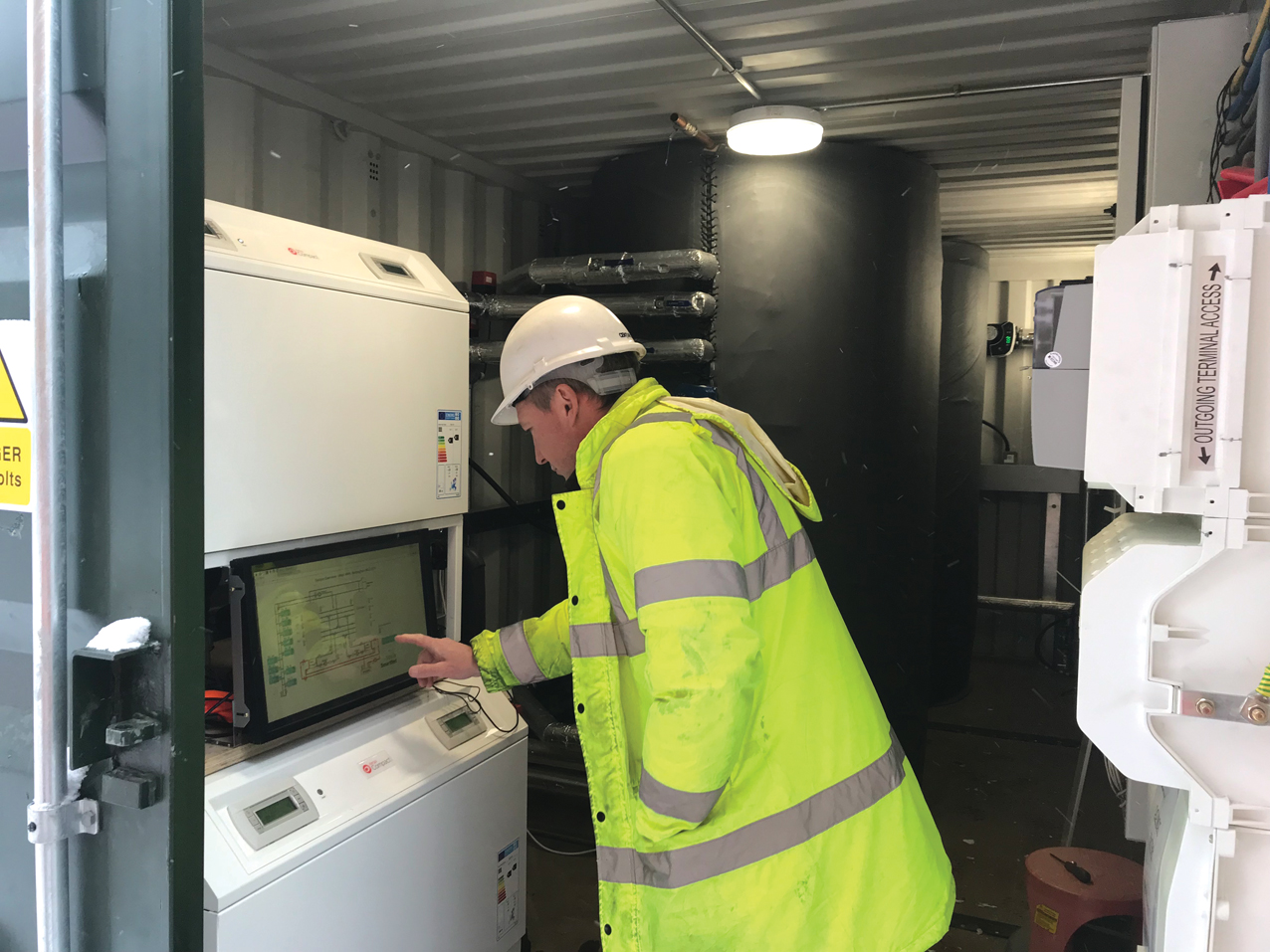 Adams adds: ‘The tenants felt they had control, and it was clear what they liked and didn’t like. The design responsibility stays with the tenderer, but the tenants were involved in the process. Our solutions were being critiqued during the process.’ Braham said that it was important that every party was working towards the same outcomes right from the start of the process. ‘It means everyone wants the long term performance to work, and the whole life cost to be reduced,’ she says.

With Melius taking on the risk, Adams believes it is important that the developer had a good understanding of component and system performance. ‘I’m not interested in the lab performance of plant, however nice the salespeople are,’ he says. ‘We want to know about real performance with real humans.’

Melius can hold manufacturers to account for their system’s performance outputs and warranty periods, and Adams says that PVs are pretty reliable and come with performance guarantees. ‘Mostly, it’s about us being confident that the equipment works. We’re taking an informed view based on our experience,’ he adds. 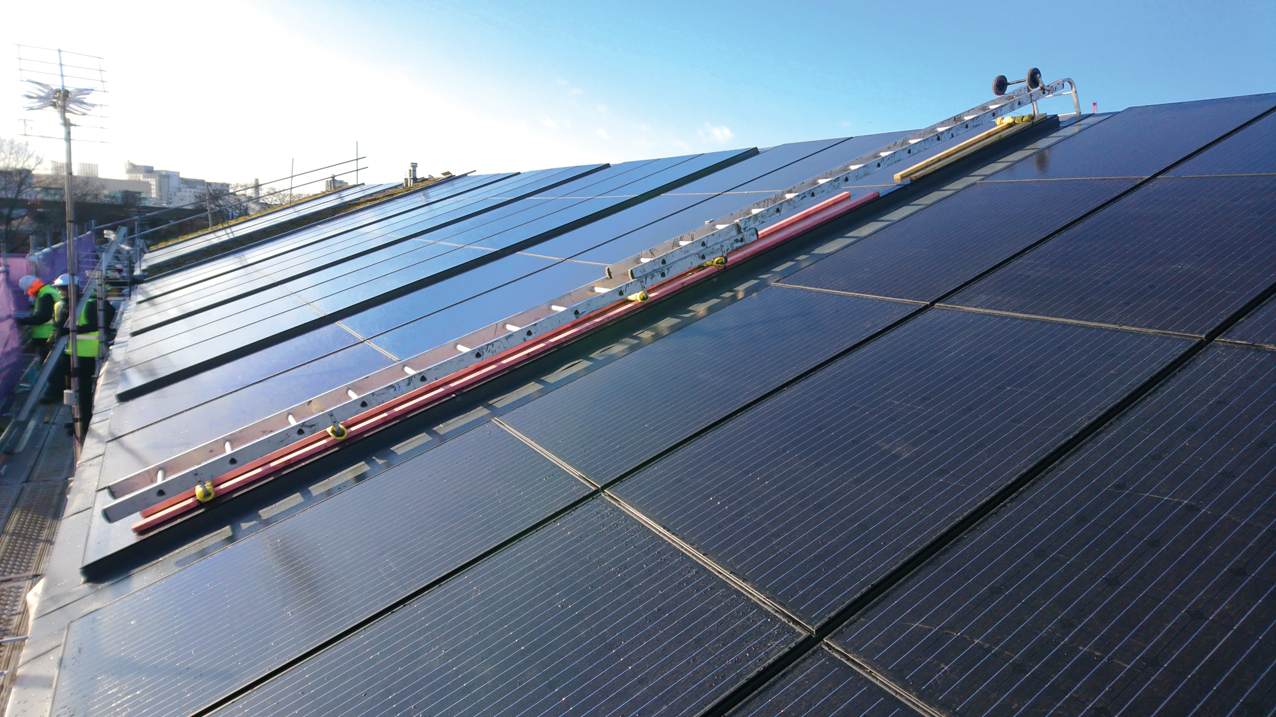 PVs were installed on site, but the aim is to prefabricate on future projects

Through prefabrication, smart technology and economies of scale, the aspiration is that Energiesprong homes can be retrofitted at a cost approaching £40,000. As the Nottingham pilot was the first of its kind in the UK, however, the fixed price was £65,000. The monetary gap was narrowed using EU funding for Energiesprong projects and by aggregating UK grants such as Eco and Feed-In Tariffs. Braham believes pooling the available money into an upfront investment makes sense. ‘If we did it all on an incremental basis, you wouldn’t achieve net zero homes,’ she says.

UK Energiesprong retrofits will pay for themselves once the process industrialises, says Doyle. ‘We need to get scale so we can deliver at pace and bring costs down,’ he says. ‘All the housing panels [at Sneinton] were pre-insulated and finished in the factory, but, in The Netherlands, they’re also installing pipework offsite. We can move away from subsidies with more scalable solutions.’ Braham, who also works in the Energiesprong market development team, agrees: ‘We need to bring together more housing providers and the supply chain to make Energiesprong happen at scale.’

Having completed the pilot, NCH is ready to start work on around 200 more homes using Energiesprong, with a further 200 properties in the pipeline. Energiesprong in the UK is gaining traction and many social housing providers are looking to build pilots. For example, the Greater London Authority has committed to 10 pilot schemes (under the moniker ‘Energy Leap’), while Devon County Council is leading a three-year Energiesprong project called Zero Energy Buildings Catalyst with Exeter City Council, North Devon Homes and Sanctuary Housing. This will result in homes being retrofitted in 2019 and 2020. 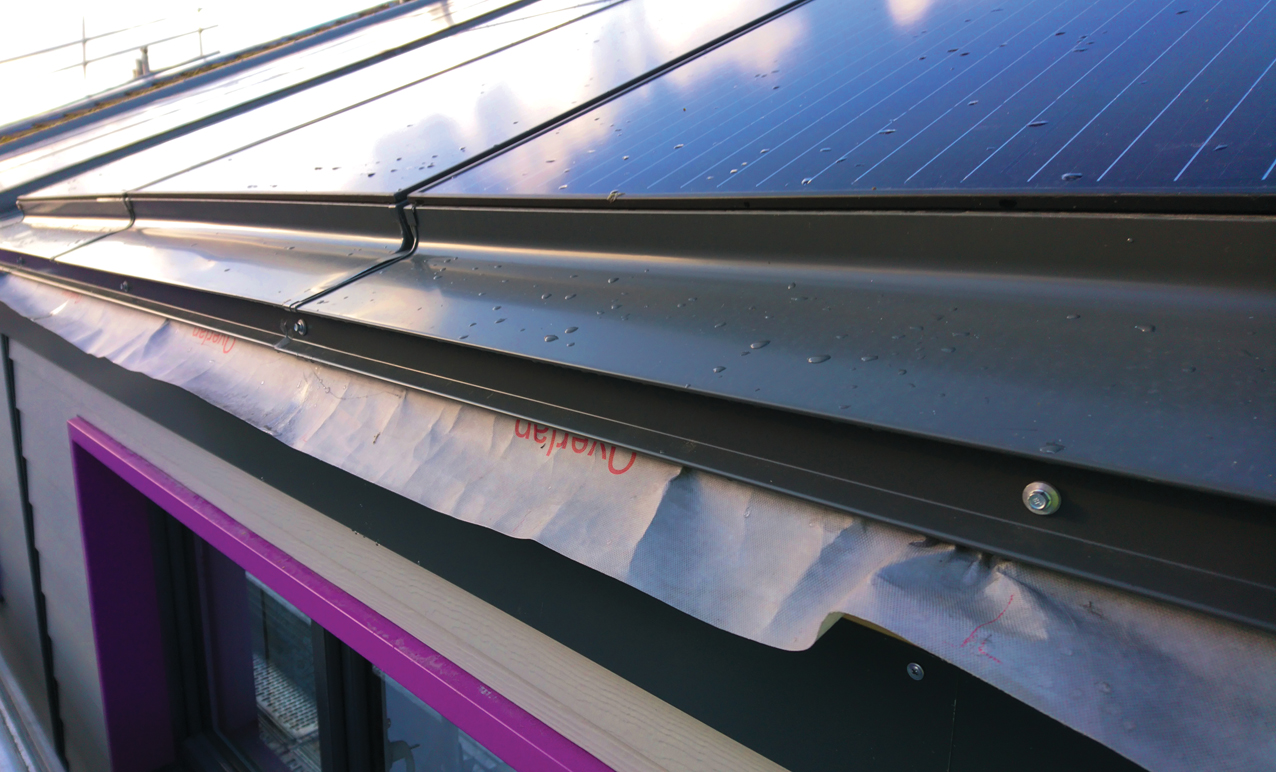 PVs integrated onto the roof

Adams, who has a background in manufacturing, says Melius Homes is keen to develop the next 200 homes in Nottingham, and will create its own factory to prefabricate panels to improve efficiencies and reduce costs. ‘We need to minimise the time on site,’ he says. ‘We shouldn’t treat it as a traditional construction project. It’s all about repetition, and driving costs down and performance up.’

It took Melius eight days to crane the panels into position, but another 30 days to integrate them. In the next phase, the fixings could be simplified and the PVs integrated in the factory. ‘Part of the reason we didn’t do it in the pilot was because we didn’t have enough time, and we wanted to make sure we were taking sensible steps. We didn’t want to try everything at once,’ says Adams, who adds that experience at Sneinton would inform the next phase. ‘This doesn’t happen enough in construction. We need to keep applying the lessons learned.’

Adams says Energiesprong is an opportunity to change tenants’ lives for the better. ‘This is all about the regeneration of communities – the technologies and processes are just a means to an end,’ he says. Two private-sector landlords did not take part in the pilot, however, which – in the words of Stuart Elmes, CEO of PV supplier Viridian Solar – makes the homes look like ‘missing teeth in a lovely smile’. NCH ‘will try to complete the terrace’, says Braham, who says the completed homes have increased in value by 25%, from £80,000 to £100,000. This is a bonus for NCH, and could be just the encouragement private landlords need to participate in future phases.

Seven terraced homes, 2.5- to three-storeys high, and three bungalows were refurbished. The private landlords of two homes in the terrace chose not to participate. Originally timber-frame structures with precast concrete party walls, there was scant insulation in the homes. Heat loss was exacerbated by a lack of insulation in the kitchen and living room floors, which were above an open store and external walkway respectively.

Three prefabricated panels, with 200mm of insulation, were installed on the front and rear elevations of each home, on insulated foundations. The undercroft below the living room was enclosed and turned into a habitable space, while the soffit under the kitchen was insulated. The works resulted in space heating of less than 40kWh·m-2 per year.

The insulated roof cassette incorporating PV panels supplied by Viridian Solar could not be prefabricated on site because of the shape of the roof. ‘We had to re-skin it on site. Structurally, the roof was quite challenging as it was asymmetric and had a step in it,’ says Adams.

Two ground source heat pumps (GSHPs), a battery and two thermal stores were installed at the end of the terrace, in a 20ft shipping container, which will be landscaped. One GSHP produces water at 55°C and 60°C for domestic hot water, and the other is optimised for 35-40°C. The extra insulation meant the heating requirements fell considerably, and Melius could use the existing radiators with water temperatures at circa 40°C.

Battery storage (32kWh) stores electricity from the 50kW peak PV scheme. ‘We want to avoid using the grid during peak periods,’ says Adams. Demand control ventilation from Aereco, consisting of trickle vents and extraction in wet areas. Overall, the pilot has reduced CO2 emissions by circa 70% (the minimum requirement was 24%).