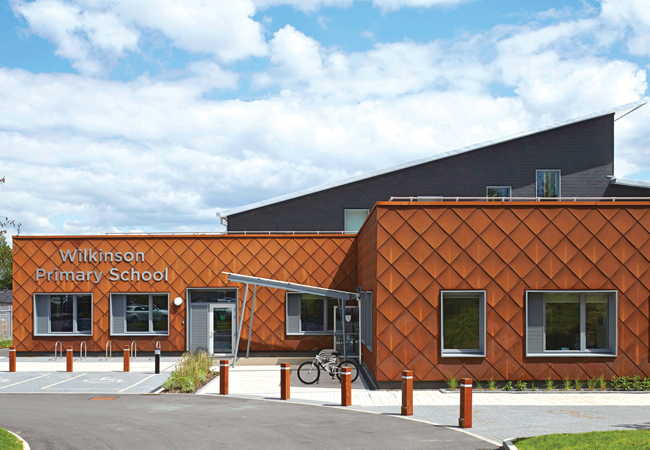 It should be no surprise that Wilkinson Primary School is an exemplar of sustainability; it incorporates lessons learned from five projects, two of which were Passivhaus-certified schools – including previous CIBSE winner Bushbury Hill School – and all of which have been designed by the same architect, building services engineer, structural engineer and landscape architect. They were also all built by the same contractor and specialist contractors, for the same client: Wolverhampton City Council.

This continuity has allowed the design and construction process to improve in iterations, resulting in a reduction in thermal energy demand in Wilkinson of almost 70% compared with the first school designed by the team (see Figure 1). This achievement was recognised at this year’s CIBSE Building Performance Awards, where the school was named Project of the Year: Public Use. 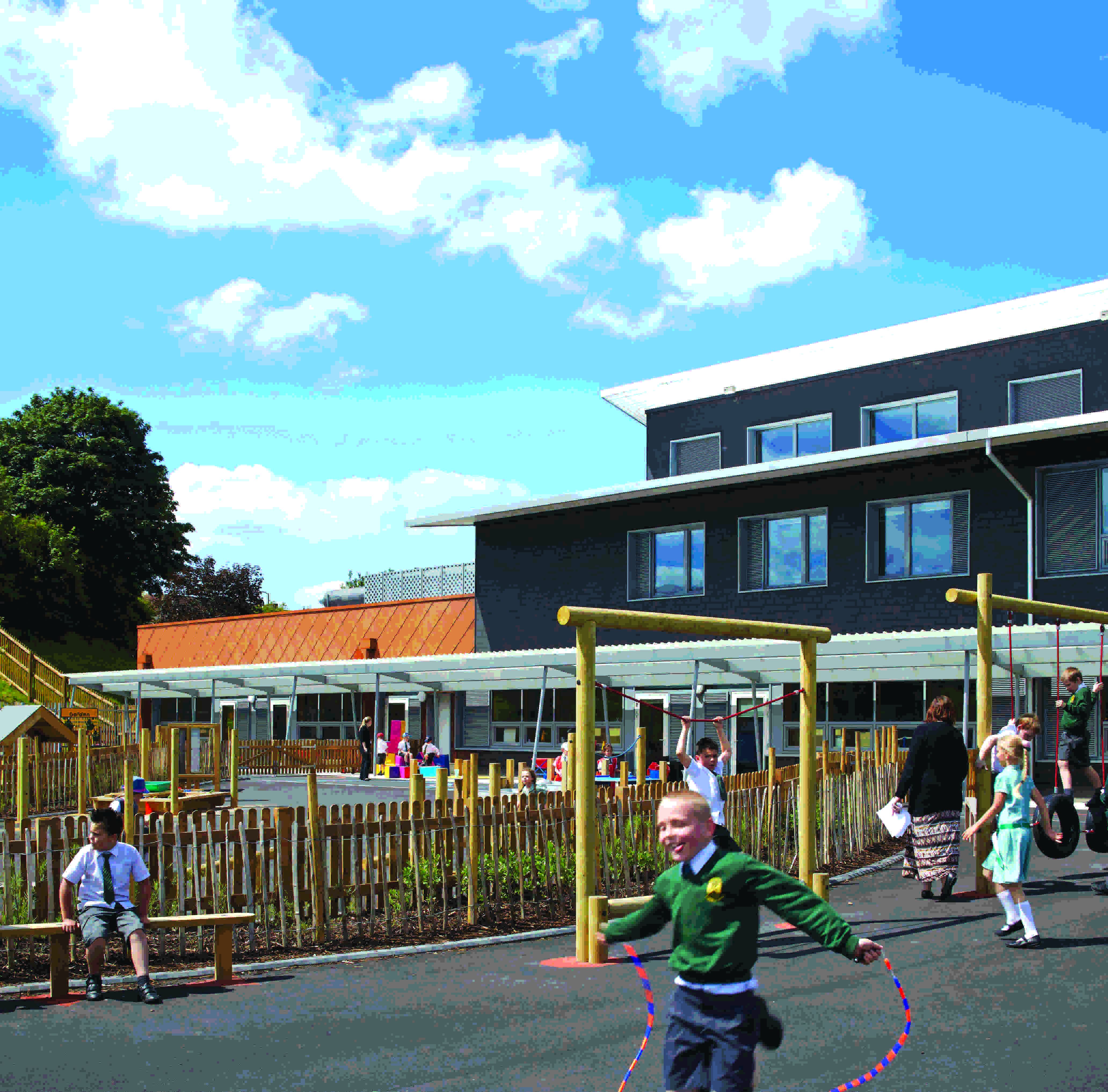 This second-generation, 420-pupil school is located on the former iron works of John Wilkinson, a Black Country industrialist and the school’s namesake. The new facility was needed after an arson attack in 2010 destroyed the previous school. Given its industrial heritage – and the more recent incineration – non-flammable corten steel was chosen as the primary cladding material. Beneath its rust-like appearance, Architype designed the school to comply with strict Passivhaus low-energy criteria.

The new, two-storey school has been built so that all of the rooms face either north or south, with the circulation and hub space in between. Key Stage 1 classrooms and a nursery are on the ground floor, and share the hall facilities and external soft-play areas. Key Stage 2 rooms are on the first floor.

The design team successfully argued that, because UK schools have a higher density of children than German schools, the Passivhaus Institute should accept a higher internal gain factor for Wilkinson to optimise its design.

For example, in previous school designs, the first floor was supported on top of the ground-floor wall cassettes; the second floor was then built up from this deck. This made the airtightness line convoluted, because the airtightness membrane had to be wrapped around the floor cassette and taped to the oriented strand board (OSB) inner skin, which exposed it to potential damage and failure during construction. By working with the timber-frame suppliers, the architect has developed a solution, which enables the ground-floor wall to extend up past the first-floor structure, to ensure the OSB airtightness layer could remain continuous. ‘We worked to simplify the construction,’ says Lumley – and it worked. When it was tested, the school fabric air-leakage rate was just 0.66m3.h-1.m-2 at 50Pa.

The airtight envelope meant that limiting heat gains through a carefully developed shading strategy was critical to prevent the school overheating in summer. The objective is to minimise solar gain in summer, without impacting on daylight levels in the rooms, or on winter solar gains, when temperatures are lower and the heat gains useful. 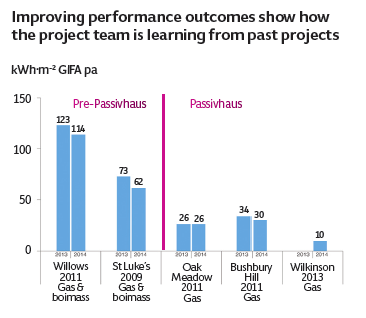 Using building simulation modelling, the team set out to control solar gains by increasing the roof overhang on the south-facing façade on the first floor. The school also includes a ‘play canopy’, formed of a translucent linear strip running the length of the southern façade and aligned with the highest window transom. This extends out over the playground to shade that area and its 15o pitch helps to reflect light up into the classrooms.

A reduction in the total glazed area has also helped the school maintain comfort conditions. Post-occupancy evaluation of the completed schools found that the Passivhaus buildings had to work hard to maintain comfort conditions on warm autumn and spring days, when the angle of sunlight is lower. At Wilkinson, the amount of low-level glazing has been reduced to limit summer heat gains. ‘We learned that we could reduce the amount of south-facing glazing,’ says Lumley. High-level glazing has been retained, however, to ensure daylight can reach deep into the classrooms and that there is sufficient solar gain in the winter.

When there is insufficient daylight, artificial light is used. The lighting scheme includes daylight dimming in the areas adjacent to the windows to reduce energy demand further. In the circulation spaces, passive infrared sensors are used to ensure lights are not left on when the space has adequate daylight levels. The average power for lighting in the classrooms is 5.6W.m-2, and 6.9W.m-2 for the building overall.

The school uses a mixed-mode mechanical ventilation strategy. In winter, the building is mechanically ventilated using a centralised ventilation system with heat recovery. Fresh air is ducted to the classrooms and exits, through acoustic transfer grilles, into the internal circulation spaces. Extract is through the hub toilets. ‘The ventilation strategy chases the children round the school,’ explains Hugh Griffiths, a partner at consulting engineers E3. ‘The same air is drawn through from the classroom to the hub space; if the children are not in the classroom, they are likely to be in the hub space.’ 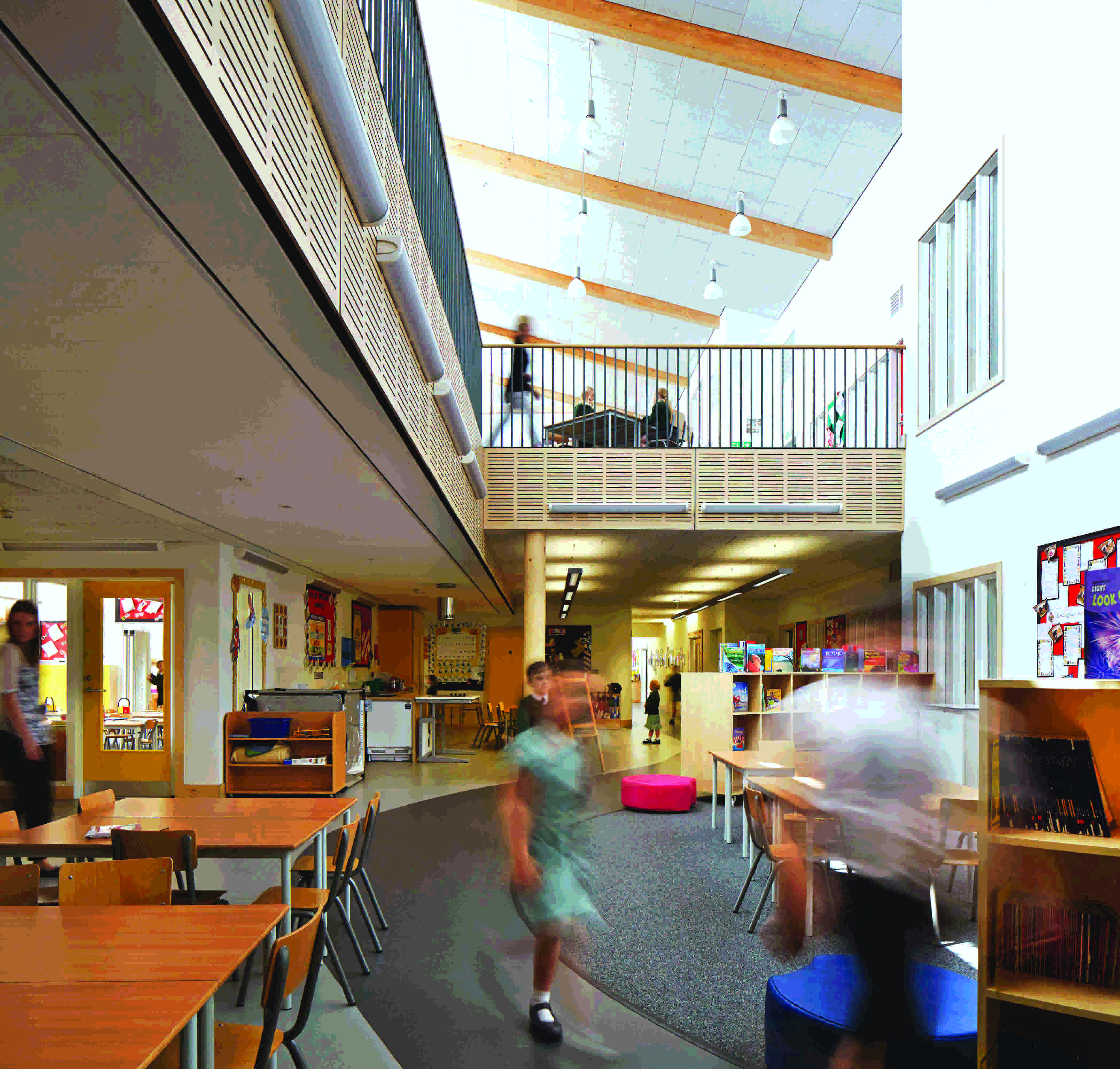 The ventilation strategy chases the children round the school

A similar strategy is used to ventilate the school hall, which connects to the hub. A shunt fan – controlled by CO2 levels in the hall – draws fresh air from the hub and into the hall. Vitiated air passes back out to the hub through attenuated transfer grilles.

In summer, the school is, mostly, ventilated naturally, with air entering through open windows and exiting into the internal circulation spaces and hub through acoustic transfer grilles. The windows are opened by staff; however, the mechanical ventilation with heat recover (MVHR) runs year round, bypassing the heat exchanger in summer, to ensure fresh air levels are maintained even if teachers don’t open the windows.

‘What we’ve found is that running the supply fans in the summer removes any requirement to communicate to the staff that the ventilation is in summer mode, so they need to open windows,’ explains Griffiths. 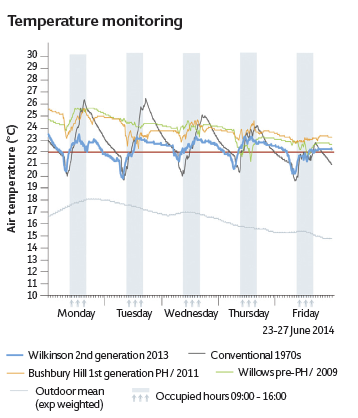 Figure 2: Summer temperature during the same week in all studied schools

This emphasis on manual control is a change from the team’s previous Passivhaus schemes, where window opening was controlled by the building management system (BMS). Post-occupancy evaluation showed that the most effective ventilation solution was for staff to regulate internal conditions. The classrooms’ secure night vents are also dependent on being opened by staff. However, in the hall and circulation spaces, actuators are used to open and close the high-level windows under the control of the BMS – although staff can override this.

In the kitchen, there has been a major change  to the control strategy, where the volume flow rate is controlled by the BMS based on kitchen temperature. Electric – not gas – induction hobs are used for cooking, which means the combustion make-up air requirement is reduced significantly, so the extract ventilation rate is much lower than for a standard kitchen. Heat generated in the space is also reduced, which improves comfort for the catering staff. ‘They have the facility to boost the ventilation rates if necessary,’ says Griffiths. This is a self-contained system; the kitchen extract incorporates a runaround coil heat recovery system that tempers the kitchen supply air.

Another innovation was the use of local electric heaters on the domestic hot water system. Radial microbore copper pipework, sized to suit the flow at the tap, connects the heater to the outlets. This keeps dead-leg volumes to a minimum and eliminates the need for electric trace heating or hot water return pipework. ‘It significantly reduces domestic hot water heat losses,’ says Griffiths. 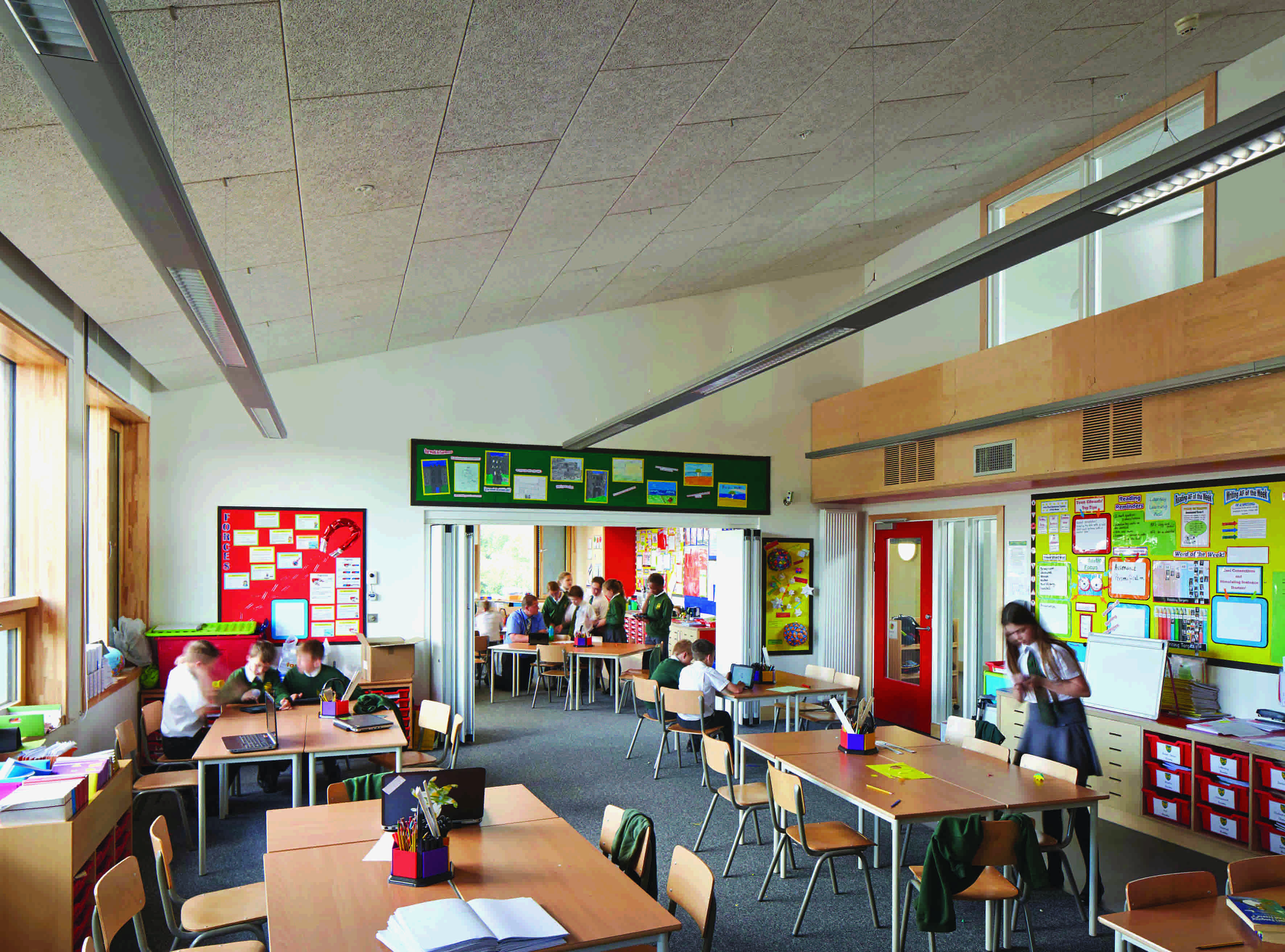 Perhaps the most significant – and surprising – modification has been to the thermal performance of the external sprinkler pump house. At Oak Meadow and Bushbury Hill schools, the sprinkler pumps, their control gear and diesel fuel tank were housed in an industry-standard GRP pump house. To keep the temperature above the 10˚C minimum for the diesel-powered pumps, the enclosure incorporated an electric thermostatic heater. ‘As much heat was being used to heat the pump house as to heat the entire school,’ says Lumley.

At Wilkinson, the architect designed a simple, well-insulated box to accommodate the pump and its associated kit. This was designed along Passivhaus lines, with a continuous insulation layer to prevent thermal bridges. It was airtight, too. The design was so successful that it has been retrofitted to the previous Passivhaus schools. 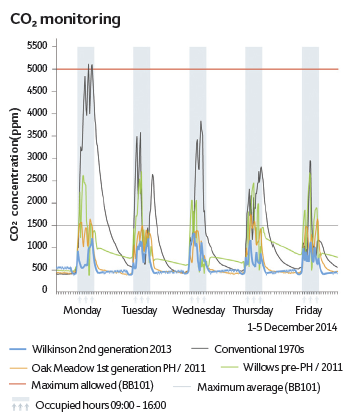 Figure 3: CO₂ levels in the test classroom during the same week in winter. Wilkinson Primary remains consistently below 1,500ppm

As part of the soft-landings process, the school has been monitored, season-tested and its systems tweaked over its two years of operation. It is not only meeting design conditions, but exceeding the performance of all the other (well-performing) schools in Architype’s year-long monitoring study, and achieving energy reductions around 90% compared with CIBSE benchmarks.

Metered data shows the iterations have been successful; at a heat energy consumption of just 10kWh.m-2, the school is more energy efficient than its predecessors and superior to a conventionally designed school. Carbon dioxide levels are maintained below the 1,500ppm limit, rarely peaking above 1,000ppm (see Figure 2) and summer temperatures have stayed within design limits, generally starting at 21°C at the start of the day and peaking below 23°C (Figure 3).

According to Architype, the school’s Passivhaus requirements ‘incurred no additional design or construction costs’ – a remarkable feat when you consider that Wilkinson is expected to save £40,000-£50,000 per year in energy and maintenance costs compared to a conventional school.