Designing to control the flow of smoke within a car park – often referred to as the ‘enhanced’ ventilation system – is covered in BS7346: Part 7 under section 10 (fire fighter access) and section 11 (means of escape). These two sections deal with a ‘fire engineered’ approach to the design of the smoke ventilation system under fire conditions and require the design to be based on an agreed design fire load.

The principle for a smoke control design requires the volumetric performance of the main extract fans to be sufficient to extract the mass of smoke generated by a design fire load, the size of the design fire preferably having been agreed with the regulatory authority prior to embarking on a detailed design.

The performance of the main extract fans will also be required to create sufficient velocity through the fire zone, to enable the jet fans to control the flow of smoke as well as overcome the buoyancy effect of the hot smoky gases.

For larger car parks, more than one point of extract may be necessary to provide for efficient smoke control

A further fundamental element of the system design will be the installation of an addressable fire detection system, which will ‘communicate’ the affected fire zone to the master control panel, which in turn will activate the appropriate jet fans to direct the smoke to the extract location. The automatic fire detection system associated with the enhanced smoke control systems should be installed with the correct specification of fire alarm equipment and specification of cable. The fire detection signal equipment should latch onto the original signal and be capable of being amended, possibly by manual override, at the master panel. However:

– Fire alarm interface boxes should not be located within the car park;
– Fire detector heads (especially smoke detectors) should not be sited in locations which could cause false alarms; and
– The fire detection system should not be interfaced with any primary or secondary lighting installations.

For larger car parks, more than one point of extract may be necessary to provide for efficient smoke control. In such cases, each extract point must be capable of extracting the volume of air calculated for the agreed fire load referred to above. 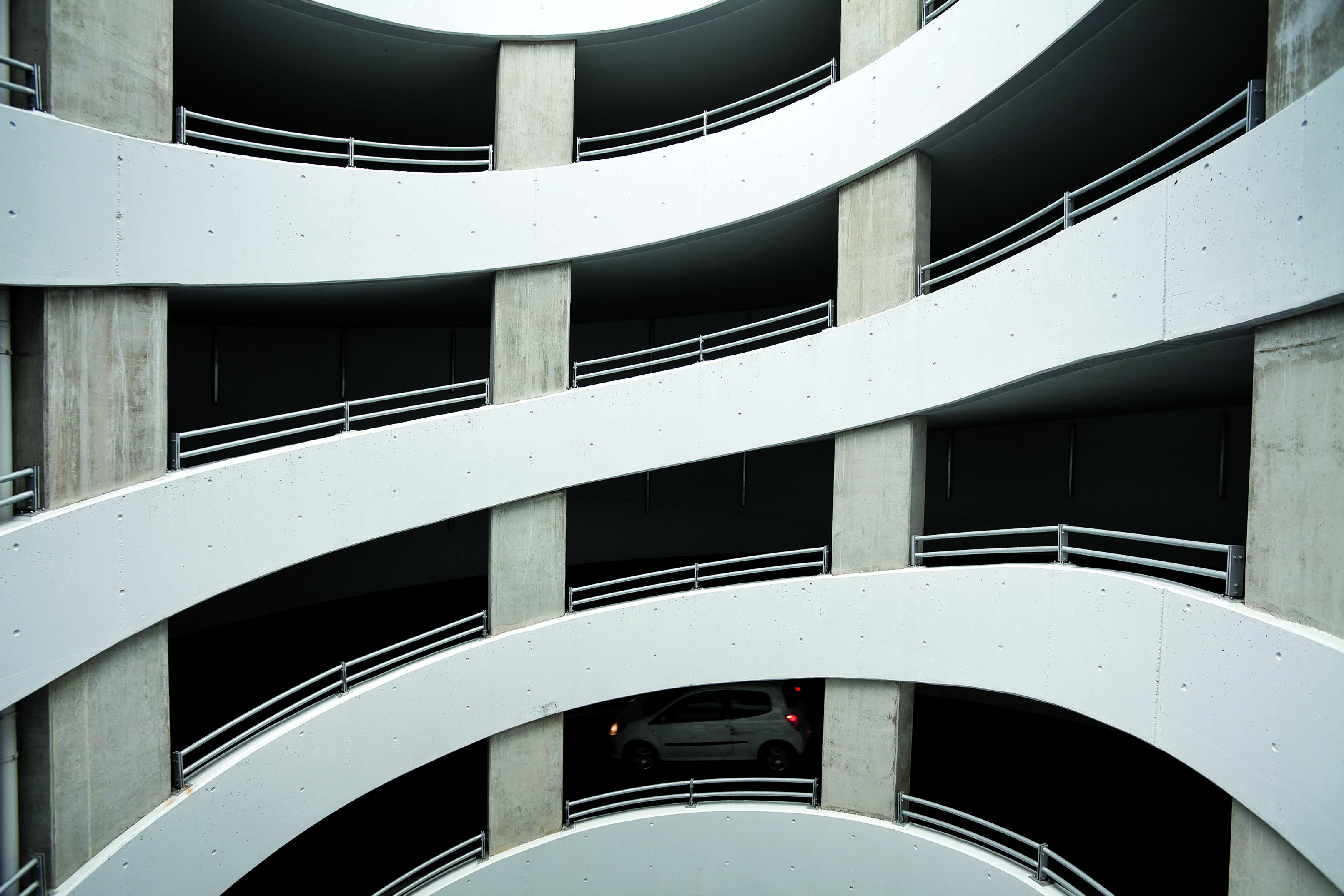 Selective operation of the jet fans associated with the affected fire zone will direct the smoke to the appropriate extract location by the most efficient route. The jet fans will induce air from other areas outside the fire zone, trapping the smoke within a predetermined corridor or path. The objective here is to protect unaffected zones, escape routes and fire fighter access routes from smoke contamination. All jet fans, other than those required to operate in order to control the flow of smoke, will be switched off in order to avoid inducing smoke into otherwise uncontaminated areas.

Approved Document F1: This document sets out the minimum requirements for the day-to-day ventilation of naturally and mechanically ventilated car parks. It specifies the maximum permissible carbon monoxide levels of 30 ppm averaged over eight hours, with levels not exceeding 90 ppm for 15 minutes.

With the increasing use  of carbon monoxide (CO) monitoring within car parks, car park environmental control has become far more efficient, enabling the ventilation rate to be accurately linked to the level of vehicle exhaust pollution within the car park.

Approved Document B3: Covers the provision of natural ventilation under fire conditions for ‘open sided’ car parks, and mechanical ventilation for those car parks that are ‘not open sided’.

BS7346: Part 7: 2006: Specifies the requirements for one of three design options: smoke clearance; aid to fire fighting; and means of escape.

The document further sets out standards for controls and powers supplies, the criteria for computational fluid dynamic modelling and for commissioning of systems.

Such system designs will often be required to be supported by a computational fluid dynamics (CFD) model demonstrating the efficacy of the system. CFD modelling can be a particularly useful tool to support the design of a car park ventilation system and, potentially, to demonstrate to the regulatory authorities that the principle of a proposed design is viable.

However, such modelling can potentially hide a multitude of sins and could be based on misleading data. It is unlikely that the models can simulate all the ‘as built’ conditions, final fan locations, drainage pipe, containment and ducting littering the soffit in areas not originally envisaged, and other structures appearing all have an adverse effect on the accuracy of the model.

In addition, the performance of the jet fan should be verified, and the way it interacts with the conditions within which it is located will have a direct and significant bearing on its ultimate performance. Accurate modelling of the jet fan aerodynamic characteristics is fundamental to the resultant accuracy of the model itself, and the fan model should form part of the CFD report.

It is critical that in any car park, heat and smoke control/ventilation systems, ductwork, fans, silencers, fixings and all components such as smoke control dampers and automatic opening vents perform continuously – at least for as long a time period as the fans when there is a fire.

One area of particular concern is the construction of the attenuators associated with smoke extract fans; another is the application of smoke control dampers (and fire dampers) mounted within ductwork. To address both areas, designers and installers of car park ventilation systems should buy and read the relevant sections of British Standard 7346: Pt 7: 2006; the following extracts are particularly relevant:

– Ductwork and fixings including silencers within the car park should be constructed of materials capable of surviving exposure to gases that have temperatures at or above 8000C and should maintain their stability and integrity under fire conditions.
– Where ductwork penetrates through a fire compartment wall or slab, the ductwork should have a fire resistance at least equal to that required for the compartment, or be in an enclosure with a fire resistance at least equal to that required for the compartment.
– A smoke control damper construction should not contain a device that is able to change the position of the damper once the safety position has been reached, i.e. the damper should not change position unless required by direct instruction from a control system.
– It is assumed that power is maintained throughout the car park where the system is installed. Consequently smoke control damper assemblies should have no thermal devices to cause uncontrolled operation, and no automatic return mechanisms that might, for instance, operate on loss
of power.

The current requirements for compliance with the Building Regulations and BS7346: Part 7 for the activation of smoke ventilation systems serving car parks is very simple, even allowing manual activation by the fire service when they eventually arrive at the site of the incident (see boxes on this and the previous page). The options available for a smoke clearance system are smoke detection; rapid rate of rise heat detection; multi-criteria fire detection; sprinkler flow switch; and fire service override switch.

A fire rated component means that the item is specifically constructed in such a way that it will resist the breakout of fire from within, or the penetration of fire from without – for example, fire rated ductwork – whereas temperature rated product is only constructed in a way that will enable its component parts to withstand a specific temperature for a limited period, for example, a smoke extract fan rated for 300C for 60 minutes.

If smoke extract fans are located within a compartment separate to the one they are serving (in this case the car park), those fans should be enclosed in a properly fire resistant enclosure providing the equivalent fire rating as the compartment within which they are located.