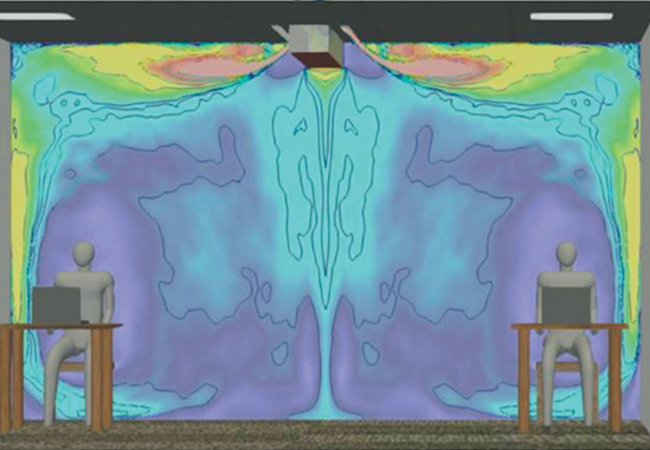 The North American market for active chilled beams for cooling and heating applications was highlighted in a paper at the ASHRAE 2018 Winter Conference by Abdullah Karimi, of Southland Industries, Dulles, Virginia.

He noted that chilled beams performance was determined by several parameters, including placement, primary supply airflow, mixed-air throw angle, and the effective rate of induced air.

These combine to make the design optimisation of active chilled beams particularly challenging when employing conventional one-dimensional calculations, and performing experimental tests for many design variables is cost-prohibitive.

Karimi introduced the application of computational fluid dynamics (CFD) as a cost-effective and accurate design-optimisation tool. He specifically employed large eddy simulation (LES), which – with proper flow-resolving computational grids – can give a more accurate prediction of the flow distribution.

He provided the output of high-fidelity LES that had been carried out for an active chilled beam design for a typical office space application, which takes account of buoyancy and typical heat loads for manikins, laptops, lights and so on. These were compared with the output of more traditional CFD that employs the two-equation Reynolds-averaged Navier-Stokes (RANS) approach, and was validated against published experimental data.

When compared with experimental data, the induction ratio (IR) was accurately predicted by LES, and RANS predicted it within 8%. The LES model captured the detailed flow structures and jet width relatively better, and – in support of the application of active chilled beams – results also confirmed appropriate draught-free cooling of the office space. The jet separation and reattachment near the ceiling was predicted by LES, while the RANS model showed wider jet width with no separation. In addition, the core of the mixed air jet was thinner in the LES results than in the RANS results.

The full paper is available here.

The technical sessions from the meetings were recorded are available here to purchase.