Four-fifths of the world lives under light polluted skies that can affect all species ofanimals, birds, insects and plants

For nearly 100 years we have installed exterior lighting to provide illumination on roads and in outdoor spaces, so that people can enjoy the night-time, travel from here to there, and feel safer. Over that time, we have had many discussions on the latest and best solutions.

Initially, light was for safety as we drove new-fangled cars at speed along roads trying to avoid pedestrians and cyclists. Along the way, we have researched and invested in better technologies and methods of lighting. From mercury lamps to LEDs, there has always been a reason to upgrade – the latest and greatest story being the energy we save.

The real question might be, why, at the same time, did we not see the mess we were creating in the way of light pollution? Sure, we have benefited people and it is safer to travel. There is better night-time entertainment, though research suggests we might be healthier adjusting our sleep patterns to the natural length of the day as the seasons change (Thomas Kantermann, 2007; Wright, 2009; Kohsaka, 1992).

The impression is of greater community safety, though, in my area, it is rare that people use the all-night street lighting to take a walk, and the only house to be burgled in recent years sits right next to a streetlight. This feeling of safety, by the way, has a diminishing return above five lux (Svechkina, Trop and Portnov, 2020).

The outcomes of night-time lighting have not been truly understood until recently. The body of evidence has been growing for more than a decade and, along with it, the number of concerned and protesting voices.

This has increased because many white LED street lights have a spectrum that contains a strong spike in the blue wavelength. That not only increases localised skyglow, but also has a particular and direct impact on life for the planet’s inhabitants, whether human, animal, insect or plant.

What about white light generally? Two things have led to an increase in white light used outdoors, gradually replacing the widespread use of sodium sources.

Research confirms that, by using white light, we can reduce the amount of light we need for the same visibility (Knight, 2010). This, and the technological revolution that is LEDs, has led to rapid adoption for savings in energy. 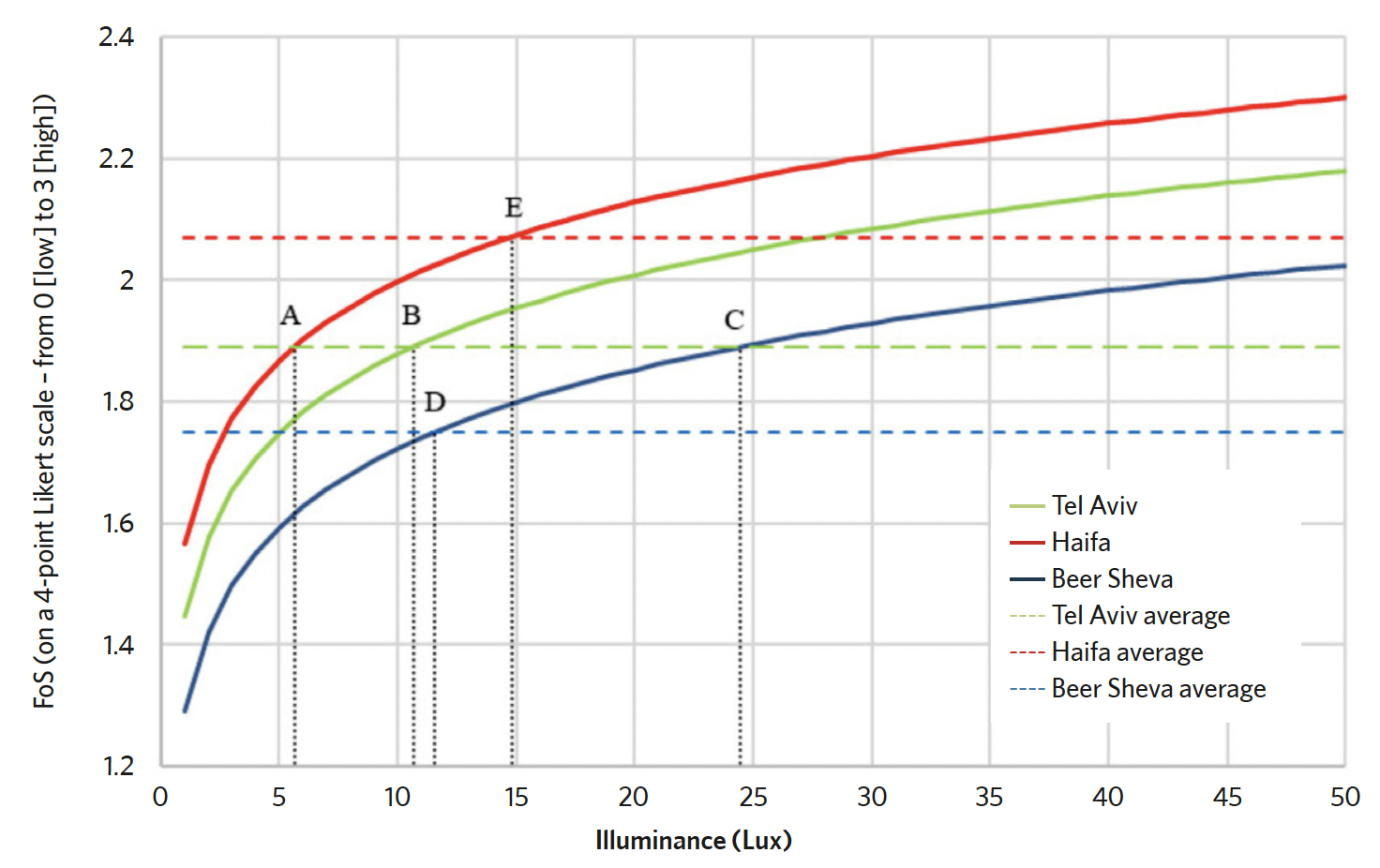 Growing evidence, however, shows that the number of lighting points is increasing as the cost to purchase and use LED lighting has fallen. The Jevons Paradox – an increase in efficiency in resource use will generate an increase in resource consumption rather than a decrease – strikes again.

As mentioned above, the wider use of white light and LEDs increases the amount of blue light in the environment. The technology of LEDs often uses blue-light-generating diodes, coated with phosphor to create the white light we see. In the process, these white light sources emit a lot of the blue end of the spectrum.

In cold colour appearance LEDs, 4,000K-6,500K, this blue content is considerably higher. Hence, our move to use white light, first with metal halide lamps and then LEDs, has increased skyglow. The Jevons Paradox has made this worse as we add more light to our public spaces and to our gardens as the falling cost makes it viable. 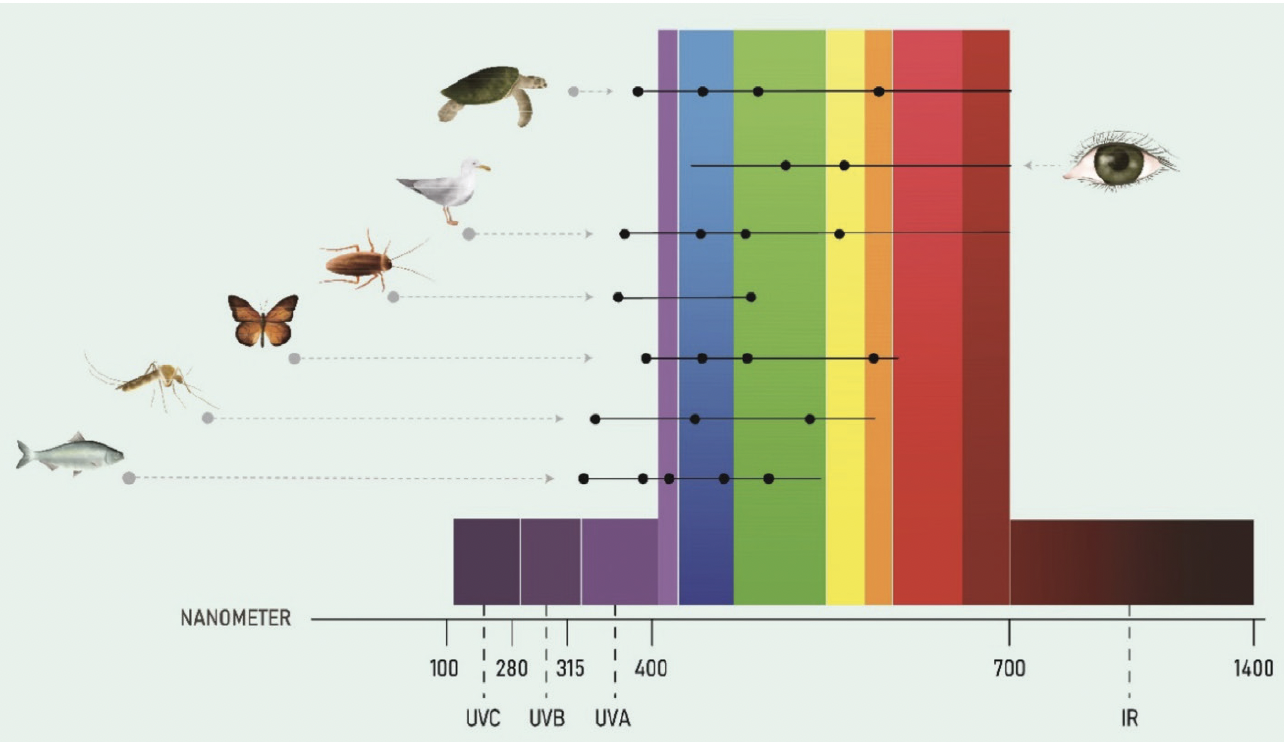 Use of white light has also impacted insect populations. While you might like the fact there are fewer flies around to annoy you, the long-term ill effects on nocturnal species and plant pollination are already starting to show (Avalon C. S. Owens, 2020).

That leaves us with a problem: how to reduce light pollution and, specifically, skyglow? The amount of skyglow increases near densely populated areas (Bierman, 2012) and our current light pollution guidance (ILP, 2020) allows for a further increase with every new installation. 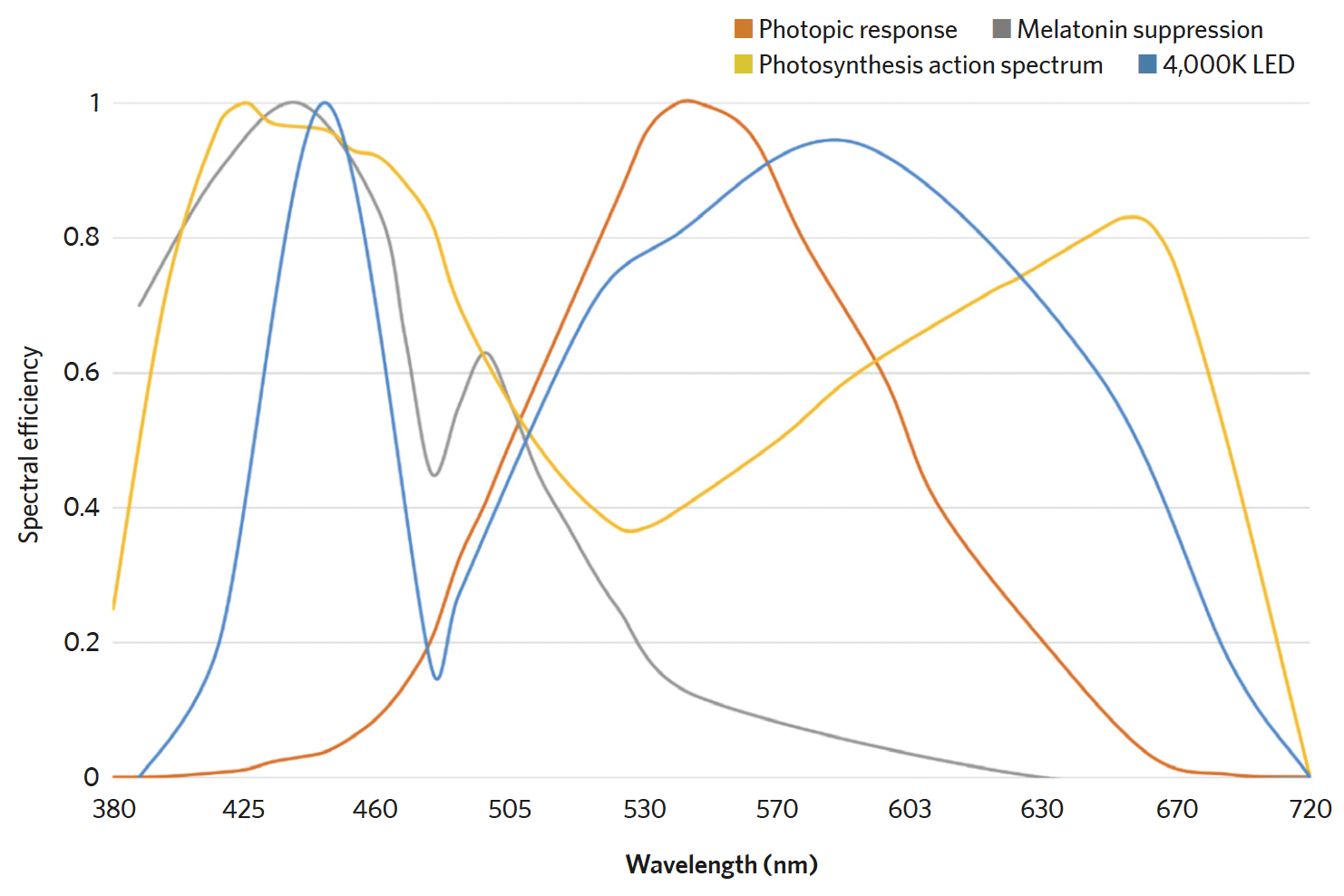 Guidance allows light onto façades in all but protected areas, and this light then reflects into the sky. Limits on upward light into the sky in rural, suburban and urban areas range from 2.5% to 15% for luminaires, meaning that new installations are allowed to add upward light, making the current situation even worse. If light pollution guidance sets targets that allow a site to increase upward light, then skyglow can only increase as our cities grow.

Could it be time to ban upward light and limit façade lighting to buildings of historical importance?

Light pollution guidance offers some solutions, including recommending fixtures that only emit light below the horizontal, and consideration of task focus and the amount of light. Even so, light often reflects off the façade, road, decking or paving, and this reflected light is still a concern.

Blues in the night

‘Many white LED street lights have a spectrum that contains a strong spike in the blue wavelength, which is most effective at suppressing melatonin during the night. In the absence of electric lighting, humans begin the transition to night-time physiology at about dusk… These 4,000K lighting fixtures may contribute to delay in the transition, which could, at a minimum, reduce sleep quality.’

‘Of particular importance is the now voluminous data showing a higher risk of hormonally linked cancers with melatonin suppression, such as breast carcinoma (an increase risk of about 15%) and prostate carcinoma.’

‘The visual discomfort that can be created by very intense point sources, especially for older drivers, is magnified by higher colour-temperature LEDs because blue light scatters more in the human eye, leading to increased disability glare.’

‘Many beneficial insects are drawn to blue-rich lighting, and circle under them until they become exhausted and die… Even bridge lighting that is “too blue” has been shown to inhibit upstream migration of certain fish species, such as salmon returning to spawn.’

In the table, you might notice two LED solutions that offer an alternative way forward – which brings us to the red in this article. Reducing the blue content of our light sources will definitively reduce skyglow. Using narrow band or phosphor-coated amber LEDs, while reducing colour rendering, will also impact skyglow. Red LEDs would go a step further. These light sources are not white light.

For sure, your expensive electric vehicle paint work is going to look a little off colour parked on the street at night, but there is good evidence that using such technologies will significantly reduce the impact of human lighting on our ecosystem.

Maybe it’s time to rethink our negative connotations of a red-light district and use this light for all our benefit.

About the authour
Iain Macrae, CEng FSLL MCIBSE, is a past president of the Society of Light and Lighting (SLL), chair of SLL LG5: Lighting for Education, and member of British and European standards panels. He is founder of the training company Light Unwrapped.

More information
The May 2022 ROLAN (responsible outdoor lighting at night) Conference, co-organised by the SLL and Dr Karolina M Zielinska-Dabkowska, head of Illume, brought together world experts on artificial lighting at night. For selected articles by key speakers visit here.