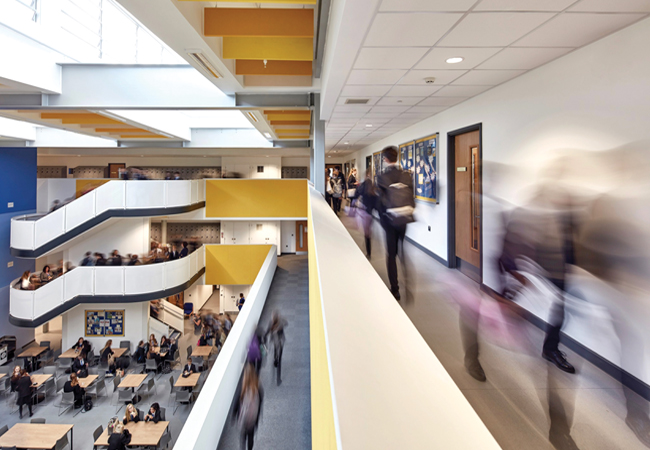 Strict new environmental requirements are making it very challenging for engineers and architects to design economically viable schools without compromising on the quality of materials and architecture.

Baseline designs developed by the Education Funding Agency (EFA) are based on cross-ventilation, where rooms are coupled with full-height atria in the circulation zone. This approach requires noise attenuation and smoke control between the occupied rooms and circulation/atrium spaces, and centralised control of the atrium environment, based on the ventilation needs in each of the occupied rooms. This needs to be coupled with – or substituted for – a system of mechanical ventilation in winter, with considerable capital and running costs, or a network of mixing systems that link with the atrium.

Nicholas Hare Architects, and building services engineer Cundall, have sought to replace this complex strategy with a much simpler, single-sided ventilation system, which could boost natural ventilation on summer days, as well as provide heat recovery. The design team helped develop a new ventilation unit with manufacturer Breathing Buildings, and the first schools to feature the design have now been completed.

The deep-plan classroom design offers an alternative to cross-ventilation, and reduces engineering complexity and the overall costs of the school.

The Nottinghamshire Priority Schools Building Programme (PSBP) batch of schools was awarded to Kier in May 2015, supported by its design team of Nicholas Hare Architects (NHA), MEP engineers Cundall, daylight analyst Chris Jackson, and MACH Acoustics. The goal of the Kier team was to deliver six schools, in line with the tight programme and budget provided by the EFA, which met the stringent Facilities Output Specification (FOS). NHA was the architect for the first two schools – Newark Academy and Serlby Park Academy. 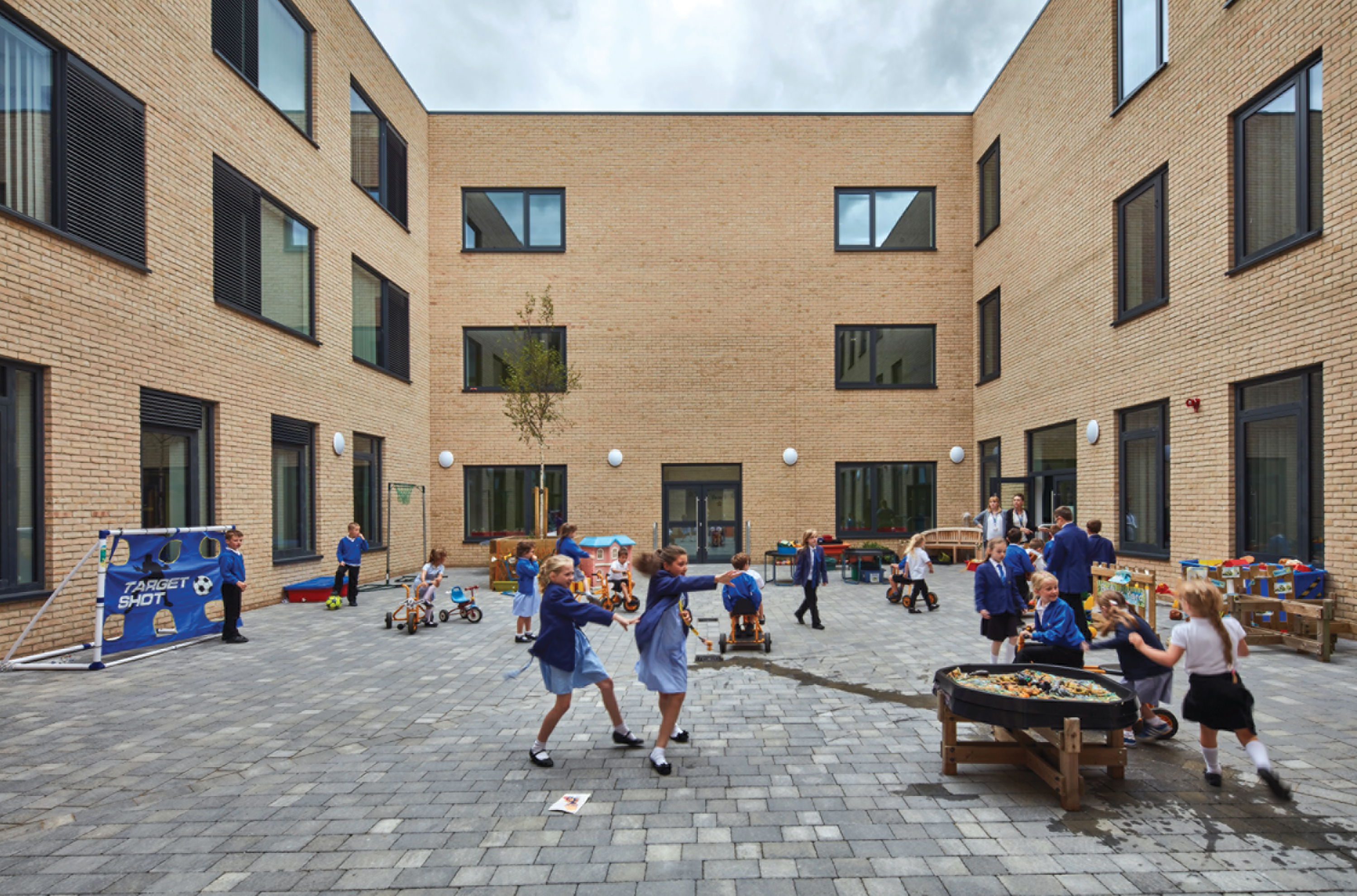 Several people in the industry have said that increasing engineering performance while tightening budgets presents a severe challenge, because engineering performance is measurable and architectural quality is not. There is a risk that the cost of satisfying the requirements of the FOS may lead to a degradation of architectural quality. The approach taken at the Nottinghamshire schools represents an attempt to meet the sensible environmental criteria of the FOS in a way that is architecturally satisfying, while preserving some funds to contribute to build quality.

The drive for economy has forced architects to consider deep-plan building forms, with minimal envelope-to-volume building form concepts. These multi-storey, ‘big box’ approaches reduce the potential for natural ventilation and daylight in teaching spaces  – the very criteria that the PSBP wishes to maximise. So the design team reviewed the ventilation strategy of the baseline designs developed by the EFA.

Even before the PSBP, Nicholas Hare Architects had teamed up with Breathing Buildings to design many schools with a variety of ventilation systems. The desirability of an effective, single-sided ventilation system had long been clear: it could offer flexibility and simplicity in building design and in operation.

However, most of the available decentralised systems were defective in terms of fresh air distribution, draughts or heat recovery, or the energy and space requirements of conventional heat exchangers. Appreciating the advantages of air-mixing systems, Nicholas Hare presented a proposal to Breathing Buildings for a fan-driven mixing unit to supply the fresh air requirements of classrooms with tempered air.

The proposal – based on an old-fashioned car heater – placed a mixing unit at the head of each window, ducting air towards the back of the classroom and allowing it to exit beside the intake, or to be remixed with the incoming air using a simple control. It was developed by Breathing Buildings to be placed into the natural ventilation with heat recycling (NHVR) unit, with two small centrifugal fans in each.

The units achieve the equivalent of heat recovery by more economical means – using low fan power and exploiting the heat gains in the space – and allow boosting of natural ventilation on still, summer days.

When using the fan to supply fresh air, a separate pathway is available for passive exhaust. This pathway can be used for two-way flow when the fresh air fan is not in use and when other openings – such as windows – are closed (as in passive night-time cooling). If a window is open, flow through the NVHR damper will depend on: the relative height of the NVHR to the other opening; the wind pressure; and the difference between room and outside temperatures. The key is how the damper is controlled – multiple temperature sensors in the NVHR ensure draught mitigation, with fan and damper modulation.

Integration into the building

NHA and Cundall worked with Breathing Buildings from the start of the design development for the Nottinghamshire PSBP. It quickly became apparent that the NVHR unit was of interest and the team set out to test how it could be integrated into the design.

Cundall confirmed from the outset that an exposed, thermally massive soffit was essential to furnish the buffer for moderating summertime temperatures, especially on the hottest days. The adaptive thermal comfort criteria used in the FOS are based on operative temperature, which is a function both of the temperature of the exposed surfaces in a space and of the air temperature.

Thermal mass, which is appropriately cooled at night, can help to ensure lower surface temperatures and, consequently, lower operative temperatures.

A comprehensive round of design studies was undertaken to test various options for façade design. The final solution was based on a modular arrangement, consisting of a window opening every 3.7m. This equates to two windows per typical classroom, three windows per typical science lab and four windows for the largest classrooms, such as those for art.

The window design was optimised to achieve the ideal balance between the performance requirements for daylight, ventilation and temperature control.

Each window opening consists of a number of elements. A large, fixed double-glazed unit supplies daylight (0.70 light transmission), but controls solar gains (with a g-value of less than 0.4). The size and location relative to the classroom space is governed by the FOS requirement for daylight autonomy and useful daylight illuminance.

The size is also economic, being about the largest that standard aluminium window systems will cope with in cost terms. Vertical Venetian blinds offer glare control for fixed windows without interference from the ventilation elements.

Two tall and narrow, inward-opening vents are placed beside the fixed pane. These create the necessary free opening area without the vents intruding significantly into the occupied space. The NVHR unit is plugged into the window frame at high level, above these vents. A single louvre is fixed on the outside, giving a unified external appearance to these three elements. The louvre was carefully selected to have a very high free area and low drag coefficient, as it is required for passive natural ventilation.

The windows behind the louvre can be opened at any time and do not need a blind, which would otherwise block the opening window or flap around in the breeze. Furthermore, there is no risk of anyone falling out, or of a student walking into the edge of an opening window. The windows can be left open out of hours for a night purge if required, as the louvre ensures a measure of physical security.

This, by now standard approach not only enables flexibility in space-planning layouts, but also produces a regular and cost-effective elevation design.

Cundall undertook dynamic thermal modelling in IES for the entire school at a very early stage, and the results obtained using this integrated design were excellent. Passive ventilation was shown to work throughout the majority of the year; the NVHR units are only called upon to operate and assist in the ventilation of the classrooms during the colder weather, on the hottest summer days, and during the summer nights.

In colder weather, the NVHR unit mixes incoming cold fresh air with warm room air at the façade, with pre-warmed air introduced at the point of entry to the room – so the risks of cold draughts are mitigated. The unit yields fan-assisted ventilation in the latter part of the hottest summer days, when the effectiveness of the heat absorption from the exposed soffit has waned. In this case, the optimal strategy is to maximise the ventilation rate of the room to minimise the difference between the interior and exterior air temperatures.

The fan-assisted flow to the rear of the room is a more cost-effective way of delivering this feature than a purely natural, cross-flow scheme. In summer, the NVHR offers a further means of ventilating the buildings at night, thereby helping to ensure it is adequately cooled in preparation for the following day.

The integrated design using the NVHR units has offered a simple and aesthetically pleasing solution to what, otherwise, could have looked like a façade peppered with small louvres, or interrupted by ventilation units – more than 100 of which feature in the scheme. The simplicity of this solution also proved to be very cost-effective. 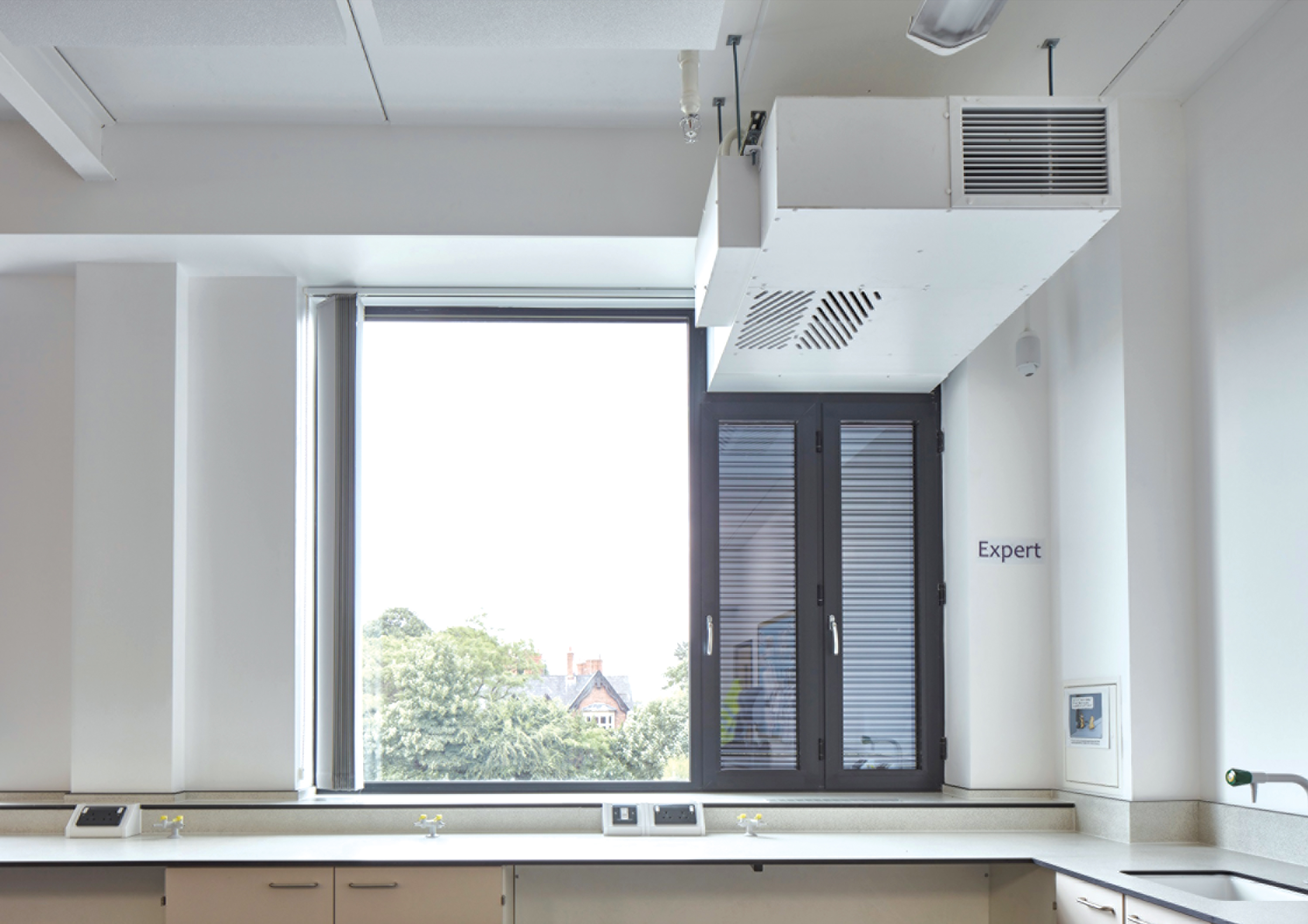