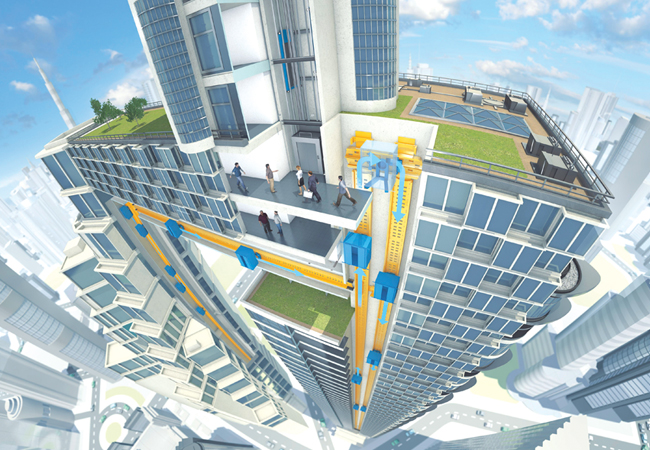 Cities are expanding upwards. Global urbanisation is pushing workers and communities further into the clouds as developers and planners build ever-higher skyscrapers to maximise every square inch of land in our congested cities. 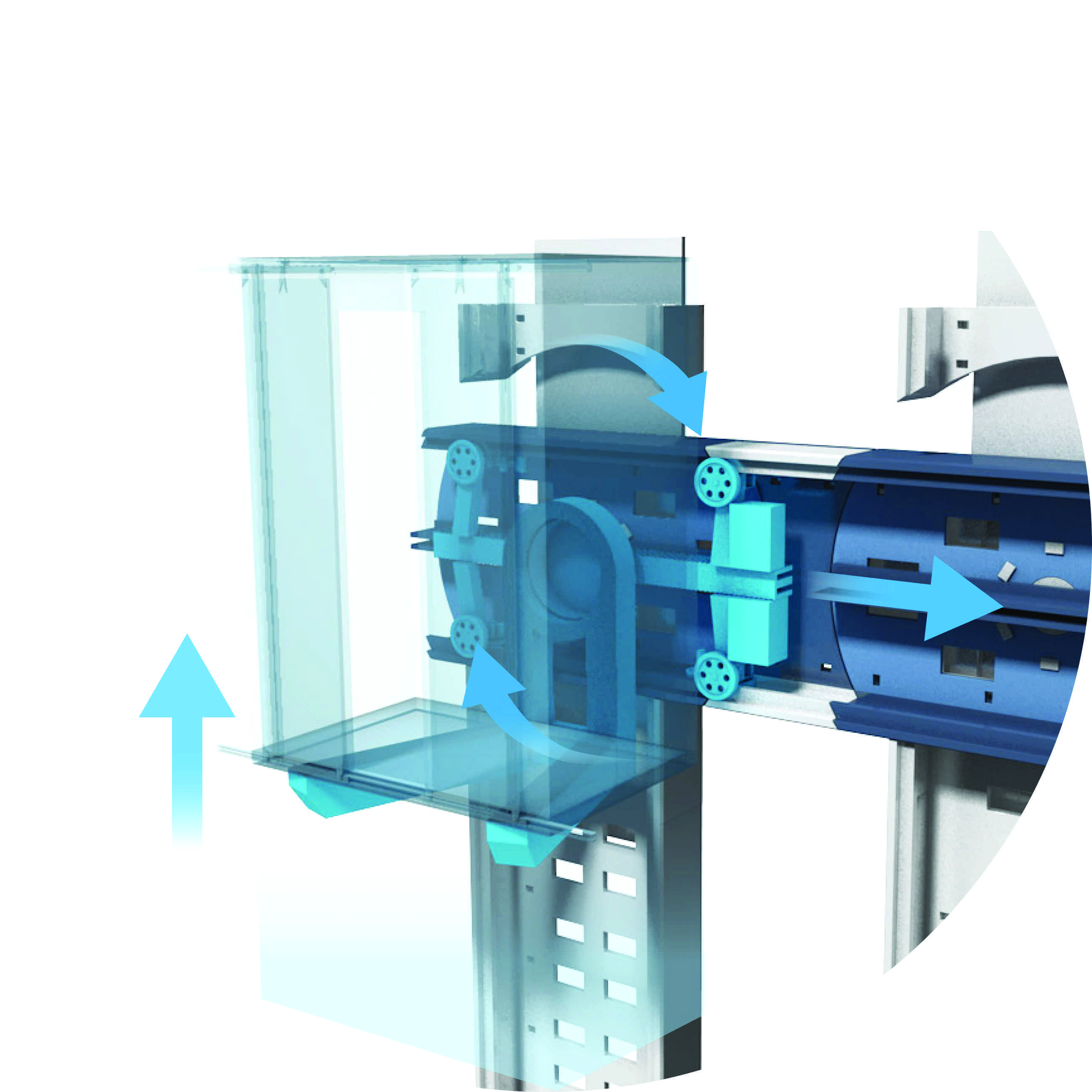 The upward push makes financial sense – more homes and offices can be built on the same footprint – but it poses challenges for the designers tasked with creating fully functioning vertical cities.

One of the biggest issues is the movement of people. Lift technology has not changed fundamentally for 160 years and is creaking under the requirements of taller skyscrapers.

Part of the problem is that the height of lift shafts is limited by the weight of the steel rope and cabins in a traditional elevator system. At a distance of 600m – the maximum height a lift can travel – the cable weighs a staggering 14 tonnes. To travel higher, residents have to catch another lift.

The issue is exacerbated by the fact that only two cabins can operate in a lift shaft at any one time. In taller buildings, this means long waits for lifts. For example, it has been calculated that New York office workers, in total, wait for lifts for 16.6 years over the course of one year, while only travelling in them for 5.9 years.

To bring down waiting times, designers can increase capacity by installing more lift shafts, which means taking up valuable floor space that could otherwise be used for homes, offices and retail. Clearly there is a compromise; if it takes too long to transport people to the top of a tower, those spaces will attract lower rents, no matter how spectacular the views.

ThyssenKrupp has taken a leaf out of the airline industry when it comes to maintaining its lifts. It is carrying out pre-emptive maintenance before they break down. Its predictive system uses real-time diagnostics over the internet to monitor critical lift parts, and algorithms to predict the remaining lifetime of each elevator’s key components and systems. For instance, sensors can measure if doors are getting slower over time and so predict when they will no longer work effectively. The company worked with Microsoft data scientists and software programmers to develop the system.

In a bid to increase capacity and reduce the number of lift shafts, elevator company ThyssenKrupp went back to the drawing board and looked at alternatives to the traditional cable system. In October, it revealed a new prototype based on magnetic linear propulsion – the same technology the company uses to power the Shanghai Transrapid magnetic levitation railway – also known as the Maglev train – which opened in China in 2004.

The 1:3 scale model, revealed to the lift industry at an innovation centre in Gijón, Spain, was revolutionary (see panel for CIBSE Lifts Group past chair Adam Scott’s verdict on the prototype). The cable was gone and replaced by a vertical loop carrying four lightweight carbon cabins propelled by the linear motor. 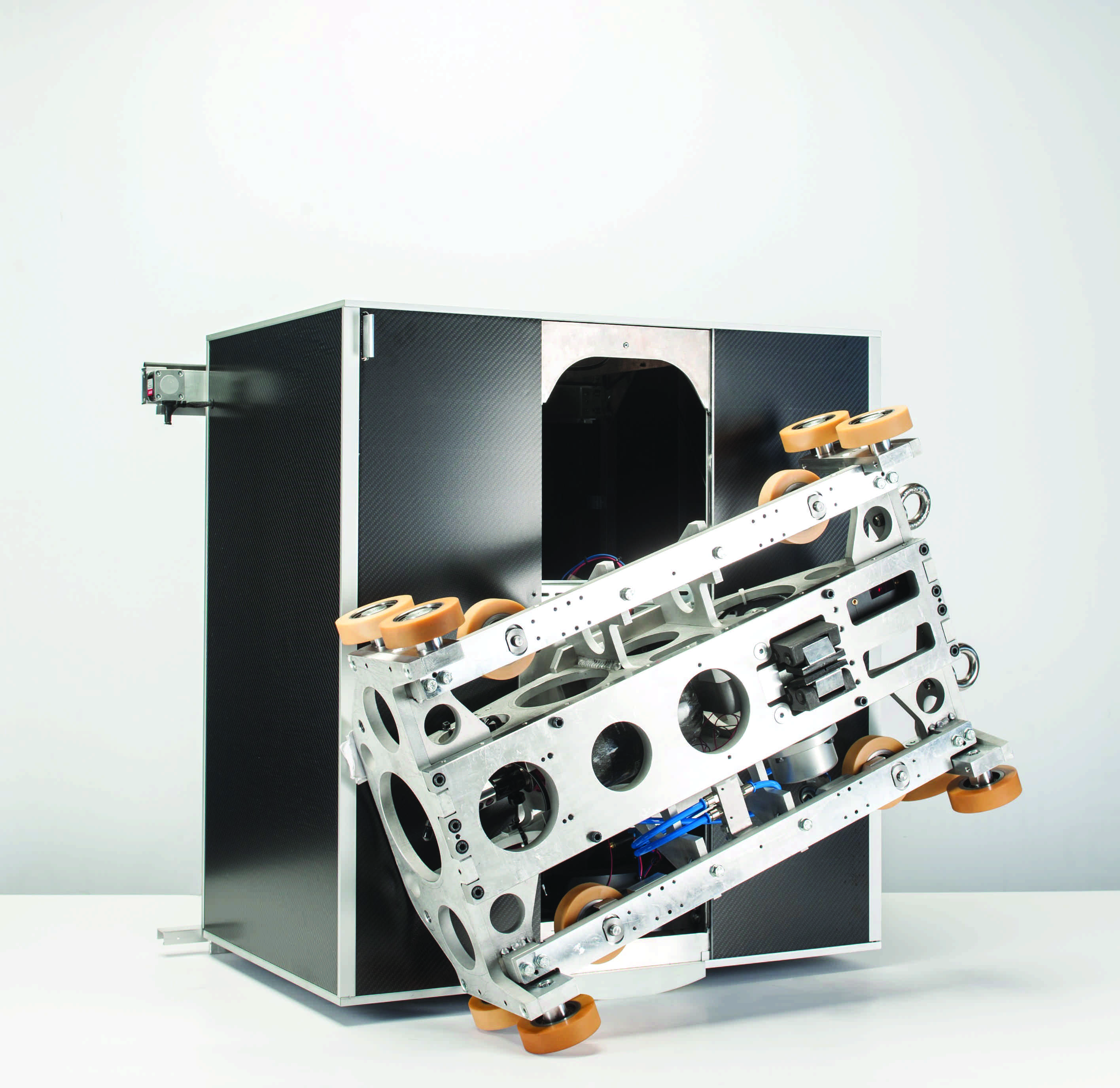 The ‘backpack’ moves cabins between shafts

ThyssenKrupp Elevator believes the cable is the limiting factor in lift development. In conventional elevators, only two cabins can be linked to a cable – the firm likens it to having a long-distance railway with only two trains operating on the line. By using a linear motor and lightweight cabins, the shaft can accommodate multiple cars in a system known as Multi – which, claims ThyssenKrupp, has the potential to boost capacity by 50%.

There is a precedent – paternoster lifts work on a similar loop system, but they never stop when in operation, making embarking and disembarking dangerous, and impossible for those with limited mobility.

How cabins travel up one shaft and down another

‘The idea is to put multiple lifts in one shaft,’ says ThyssenKrupp Elevator executive chair Andreas Schierenbeck. ‘It’s not a new idea. The trick is to combine the linear motor technology, which already exists, with the IT, which has to control the distance between the cabins.’ The company estimates that the multiple lifts will mean passengers only have to wait 15 to 30 seconds for a cabin.

The capacity boost could cut the number of lift shafts required in a building, says ThyssenKrupp, which estimates the elevator footprint could be reduced by 50% – in part because the system only requires 6m2 shafts compared with 9m2 in traditional systems.

Schierenbeck says the technology can serve taller buildings: ‘There are no limits on height using linear motors – they are fully scalable. There’s no load issue and no tension issue.’

There may be no weight restriction, but the cabins have been redesigned using lighter carbon materials, which means less energy is required to move them. This is key, because, without a cable system, there is no counterweight balance taking the load off the lift motor. The manufacturer also claims energy use is minimised because the linear motor is only activated where the cars are located. It also says an energy recovery system could, in future, convert the kinetic energy of descending carriages into electrical power for the upward trip.

The height of lift shafts is limited by the weight of the steel rope and cabins in a traditional elevator system. At a distance of 600m – the maximum a lift can travel – the cable weighs 14 tonnes

ThyssenKrupp Elevator’s head of research, Markus Jetter, likens the system to a metro. ‘It’s like the Circle Line in London, put on a wall. The train becomes carriages travelling on vertical tracks in the elevator shafts.’

While having multiple cars allows greater passenger capacities, the engineers have another great trick up their sleeves. The system allows cabins to move horizontally, as well as vertically. When a cabin reaches a horizontal shaft, a ‘backpack’ on the lift rotates through 90°, allowing the cabin to move along a horizontal ‘track’ using the same linear motor technology. This enables the cabin to travel up one shaft and down another (see diagram below). Schierenbeck says this opens up possibilities for passengers across large buildings and, potentially, from car parks to buildings, although the speed will only be 5m/s. 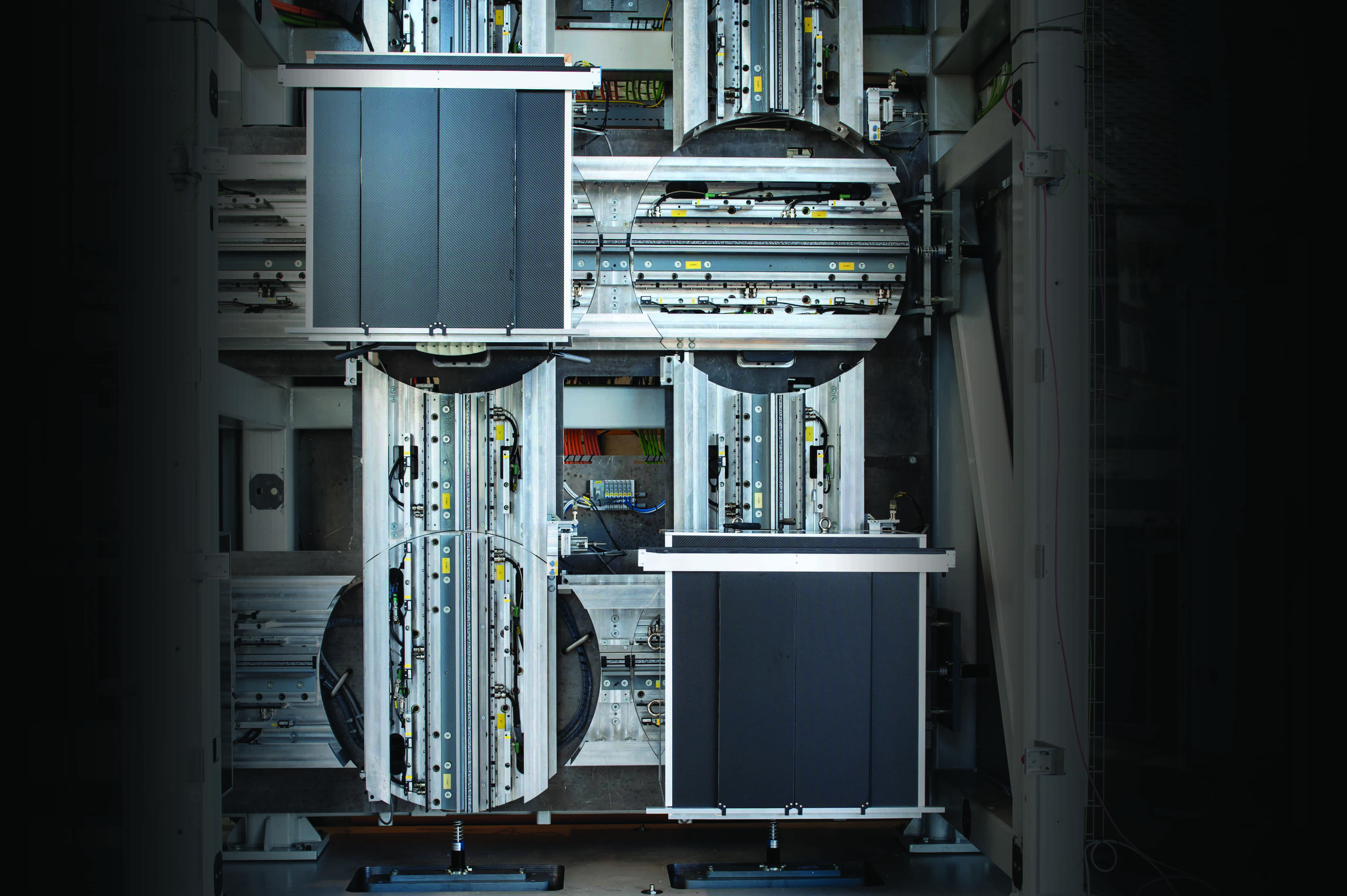 The horizontal motion will help move people across large buildings

ThyssenKrupp is talking to 30 designers, investors and planners about the system, in part to give regulatory bodies and designers the chance to work with his engineers on the requirements of the system. ‘We want to give partners confidence, so we can shorten the timeline to the market,’ says Schierenbeck. He predicts the systems’ economies of scale will work particularly for buildings of more than 300m, which means targeting the Middle East and Chinese markets where the majority of very tall buildings are planned.

A full-scale prototype will be built within the next two years at an elevator test tower in Rottweil, Germany. Here, the serious business of certification and inspection will take place, which will ultimately determine how quickly the ‘Willy Wonka’ elevator will become a reality.

ThyssenKrupp’s technology has the potential to change the fundamental form and function of our future buildings and connected world. A bold statement, but one I believe is true, provided one notes my careful use of the word ‘ potential’. For the challenges ahead are significant, though ThyssenKrupp’s appetite and drive to deliver are clear to see.

Are we ready for the ropeless lift?

Vertical transportation expert Adam Scott is excited by Multi, but says significant challenges lie ahead in getting the ropeless lift to market

Last month I was one of 400 people invited to the launch of the Multi prototype in Gijón, Spain. This marked the first of ThyssenKrupp’s milestones, which will culminate in a customer installation in the real world by the end of 2019.

The scale of the challenges ahead are brought into focus when one considers such fundamentals as design standards. When I asked one of the engineers which code they are designing Multi to, his response was illuminating. ‘We don’t know yet. We’re not yet even sure what Multi is? Is it a lift, a train, a machine? Perhaps it needs a new standard?’

Taking established horizontal linear motor technology and rotating it through 90° is a simple idea, and many successful innovations of the past have been founded on simple ideas.

One of the biggest challenges is gravity and its implications for energy consumption; for while Multi dispenses with the limitations of heavy suspension ropes, it also loses its friend, the balancing counterweight. So minimising the moving mass is vital to success; the heavier the lift car and its duty load, the more energy required to move it vertically. We can see the initial consequence of this in the carbon-fibre construction of the prototype lift cars – and indeed, in the modest car-size aspirations of the initial design studies.

Commercial challenges also lie ahead. ThyssenKrupp’s last big innovation was the Twin, the running of two independent lift cars in one lift well. This is a great piece of engineering, but its success and market penetration have – in my opinion – been muted by the fact that the technology remains available from only one supplier, and clients typically don’t like that kind of procurement and ongoing maintenance legacy. Perhaps some form of carefully licensed joint-venture approach may serve Multi better.

One thing I didn’t hear discussed much in Spain was cost. This is understandable given the early design stage of the product, but it was clear to see that cost will be a challenge. Weight-saving, carbon-fibre car slings, metres upon metres of linear magnets, and complex exchanger mechanisms all look expensive.

That said, if the technology can deliver on its potential, it could rewrite the efficiency benchmarks for buildings, saving lots of very valuable space, which could justify significant additional cost in the transportation system.

While initial aspirations are focused on small cars running in circular shuttle trains, the real goal should be seamless horizontal and vertical movement where passengers could, conceivably, travel from their metro train station to the base of a building, up the building and across a floorplate to their destination, without leaving the transport pod. Whether it is me or my son who will experience a Multi world is yet to be seen, but from what I saw in Spain, I suspect it may be me. 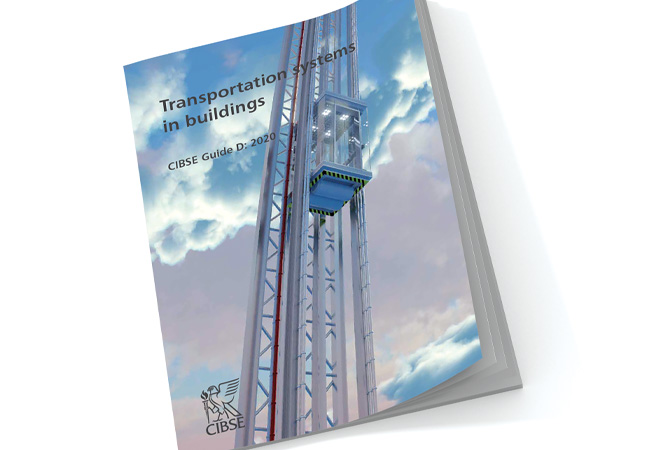