Global temperature rise needs to be kept below 1.5°C above pre-industrial levels to avoid catastrophic climate change. If this is to be achieved, all new buildings must operate at net zero carbon by 2030, and existing buildings by 2050. London, as a global city, has a responsibility to help lead this transition to a low carbon future.

Frustrated by the ineffectiveness of energy policy within the capital to drive design solutions that will bring about real change, Elementa Consulting opened a discussion with the built-environment sector.

The result was the London Energy Transformation Initiative (LETI), a voluntary network of more than 170 professionals – with support and input from the Greater London Authority (GLA) and London boroughs – which have come together to help put the city on the path to a zero carbon future. 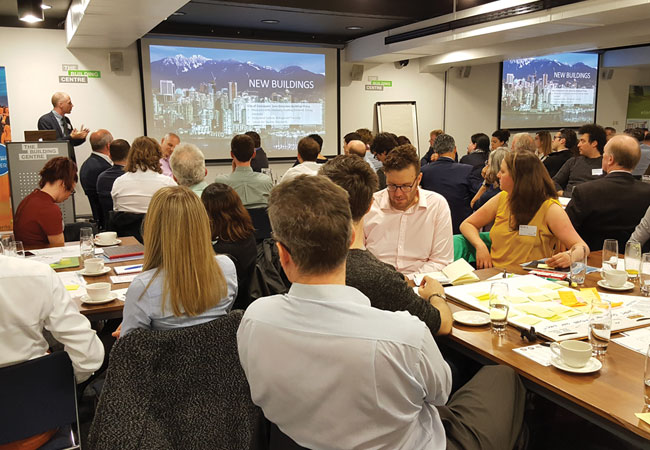 The draft London Plan was published for consultation in November; chapter 9 sets out the policy on carbon emissions of buildings, plus the mayor’s ambition for London to become zero carbon by 2050. Progressive targets on air quality and the circular economy are also included.

We are pleased that many LETI energy policy proposals have been incorporated into the draft London Plan:

Major developments will be required to monitor and feed back on energy performance – by exhibiting a Display Energy Certificate (DEC), for example, and reporting to the mayor for at least five years. Disclosure of building energy use is a central component underpinning progress in reducing carbon emissions and running costs.

Disclosure brings many benefits, such as:

Proposed new developments must show how they are future-proofed to achieve zero carbon onsite emissions by 2050. Large-scale energy refurbishment works will need to be carried out on most existing buildings – and it is imperative for our zero carbon future that new buildings don’t just get added to the list of properties that need to be refurbished. This means heating and hot-water systems will be selected with future carbon-emission factors in mind.

Energy-strategy submissions must now show how the development will minimise peak energy demand through installation of smart meters, demand-side response and short-term energy storage. The carbon factors of the electricity grid – and, probably soon, the cost – is high at times of peak electricity use. This policy helps to ensure developments do not add significant load during these periods, which will be critically important as more of London’s heat generation switches to electric.

The draft London Plan suggests a new heating hierarchy that must be adhered to by major developments in heat network priority areas. It prioritises the use of secondary heat sources, which are presumed to include ambient loop energy-sharing networks, and heat generation from zero-emission sources. This is in line with LETI’s proposed Delivering Low Carbon Heat Hierarchy.

Some key LETI heat network recommendations have not yet been incorporated, however. These include district heating systems having a zero carbon transition plan, and the disclosure of efficiency, distribution losses, costs, and actual carbon factors for all heat networks.

Below, we look at some other LETI recommendations that are expected to create real change, but which have yet to be adopted within the draft London Plan revision.

LETI measures that could be adopted through draft London Plan consultation

One of the major proposals from LETI is to move away from a CO2 percentage reduction. As it stands, this encourages a culture of false reporting, with the outdated carbon factors currently mandated, and does not lead to best practice design and performance.

LETI advocates a total consumption kWh/m2 (energy use) metric – including regulated and unregulated energy – in line with similar international standards. Global best practice includes Toronto’s Zero Emissions Buildings Framework, Vancouver’s Zero Emissions Building Strategy, the Canadian Green Building Council’s Zero Carbon Building Standard and the Passivhaus standard. The kWh/m2 metric offers a consistent indicator to be measured at each stage of the design process – ultimately, and most importantly, during operation, to allow identification of the most successful approaches.

The draft London Plan mandates that 10% (domestic) and 15% (non-domestic) carbon-emission reductions be met through energy-efficiency measures. This includes both fabric performance and system efficiencies.

Building on the LETI movement

As an industry, we need to give a unified response about the direction of the future of heat generation. The draft London Environment Strategy says the UK government will only make a decision on the long-term role of natural gas in 2030. We do not have the luxury of waiting until then to set our trajectory.

Since its inception in May 2017, the London Energy Transformation Initiative (LETI) has worked on the basis that collaboration between industry professionals is the most effective way to develop robust energy policy recommendations. It is vital that the industry presents a united, simple approach to policy-makers at a city and national level. LETI is the vehicle that has delivered this. The process is outlined below.

Initial workshop
‘Let’s fix London’s broken energy policy’ workshop – organised by Elementa Consulting – was attended by 110 industry professionals in May 2017. Participants developed ideas and recommendations that could influence London’s energy policy. Working at 10 tables, each group focused on a specific theme. Having identified their priorities, a member of each table presented to the room, and then each participant had the opportunity to vote for the ideas they thought most important. LETI’s four key priorities were distilled from the group presentations, the dot-sticker voting and the summary notes from each workshop table group. These were then published in a summary report that was submitted to the GLA in July 2017.

Working groups and LETI taskforce
The priorities that emerged in the workshop formed the basis of four working groups – energy use disclosure; better performance metrics; decarbonising energy and heating; and delivery mechanisms. Each looked at its topic in greater detail and offered robust recommendations for implementation. The LETI taskforce further distilled these into a set of energy policy proposals that the industry could sign up to. This formed the second LETI report, published in September 2017, and 39 organisations – plus more than 200 individuals – have signed up to support the policy proposals. Go to
www.leti.london to read both reports published by LETI and to see the list of organisations that are supporting its policy proposals.

The London Energy Transformation Initiative will continue to work with the GLA to offer advice on implementation of the new policies in the London Plan, and will organise a wider consultation.

LETI will continue to promote the kWh/m2 energy-use metric for design phases, in collaboration with the UK Green Building Council (UK-GBC) and the Better Buildings Partnership (BBP). LETI believes this is crucial to designing operational zero carbon buildings today.

It is important that we don’t wait for policy to drive decision-making – LETI will be developing a framework for consultants and developers to use at the design stage, to assist operational zero carbon developments.

How can you get involved?

To help put London on a pathway to zero emissions buildings, email clara.bg@elementaconsulting.com to get involved with LETI.