The failure of the Grenfell Tower smoke-control system has been identified by experts as a factor in the building’s escape route filling with thick smoke, which may have prevented evacuation and rescue. The system was designed to extract smoke from lobbies outside flats in the event of a fire and protect the staircase.

In her report, Arup fire engineer Dr Barbara Lane – appointed by the Grenfell Tower Inquiry – said the single escape stairs and lobbies, and the fire-safety provisions within them, were designed to operate on one floor only, based on the assumption that fire would be contained in one flat. The smoke-control system could not have protected the staircase from smoke on multiple floors.

Because of the cladding fire, however, a whole-building fire occurred, so the stairs and its lobbies became the most important life-safety feature. However, Lane said she had ‘considerable concern’ about the fire-safety provision within them. In her report, she said the smoke-ventilation system design did not follow guidance in Fire Safety: Approved Document B (ADB) 2013 because it was a bespoke system. There was also evidence that it did not perform as designed, with automatically opening vents (AOVs) not closing correctly.

Lane’s report said the system, installed in the tower’s 2012-2016 refurbishment, was neither a natural smoke dispersal system nor a pressurisation system. It was a bespoke, combined natural and mechanical system, so did not follow the guidance in ADB 2013 or the recommendations in BS EN 12101-6:2005 Smoke and heat control systems. Specification for pressure differential systems. The original smoke-ventilation system was non-compliant with CP3 1971. It, too, was a bespoke system, and the new system was an upgrade of this.

‘Since the required performance criteria are not specifically defined and, as currently described, do not relate to the provisions of the statutory guidance, I cannot confirm the bespoke system complies with the Building Regulations (B1 and B5),’ said Lane.

However, she added that, even if the system had been compliant, it was designed to offer smoke control on one level only, not to clear smoke simultaneously from multiple floors. (See panel, ‘How the smoke-ventilation system was intended to work’.)

How the smoke ventilation system was intended to work

During a fire, the system was intended to extract smoke, using mechanical fans, from the fire-floor lobby only, through two pairs of smoke shafts – north and south.

Smoke detectors in the lobby should automatically activate the smoke system, shutting down and isolating the environmental ventilation, isolating all lobbies – except for the fire floor – by shutting automatically opening vents (A0Vs) on all other floors, and activating the extract fans serving the north and south shafts.

In smoke mode, as air and smoke is extracted from the lobby, it would draw air into the lobby from the stairs, which had a permanently open vent at roof level. The flow of fresh air from the stairs to the lobby was intended to prevent smoke from entering the stairway.

‘Therefore, in Grenfell Tower, where all lobbies from level four to level 23 became smoke logged, the system would have been able to provide smoke control to one lobby only. It would not have been capable of preventing the spread of smoke to the stairs from lobbies on other levels,’ Lane’s report stated.

Fire-safety provisions in the current statutory guidance are not intended for a multi-storey, whole-building fire – but only for a localised fire event, said Lane.

The requirements for the system were initially provided by Max Fordham to PSB UK, which developed a proposed design for a smoke-control system to replace the existing one at Grenfell Tower. In its opening statement to the inquiry, Max Fordham said: ‘All other active and passive fire/smoke protection measures are designed to address the scenario of a fire on a single floor, not on multiple floors as occurred at Grenfell Tower.’

It added: ‘Max Fordham will wish to examine the extent to which secondary fire/smoke-protection measures or “layers” are affected and/or overcome by a fire that so extraordinarily bypasses the primary, and overarching, layer of protection that is the principle of compartmentation.’ 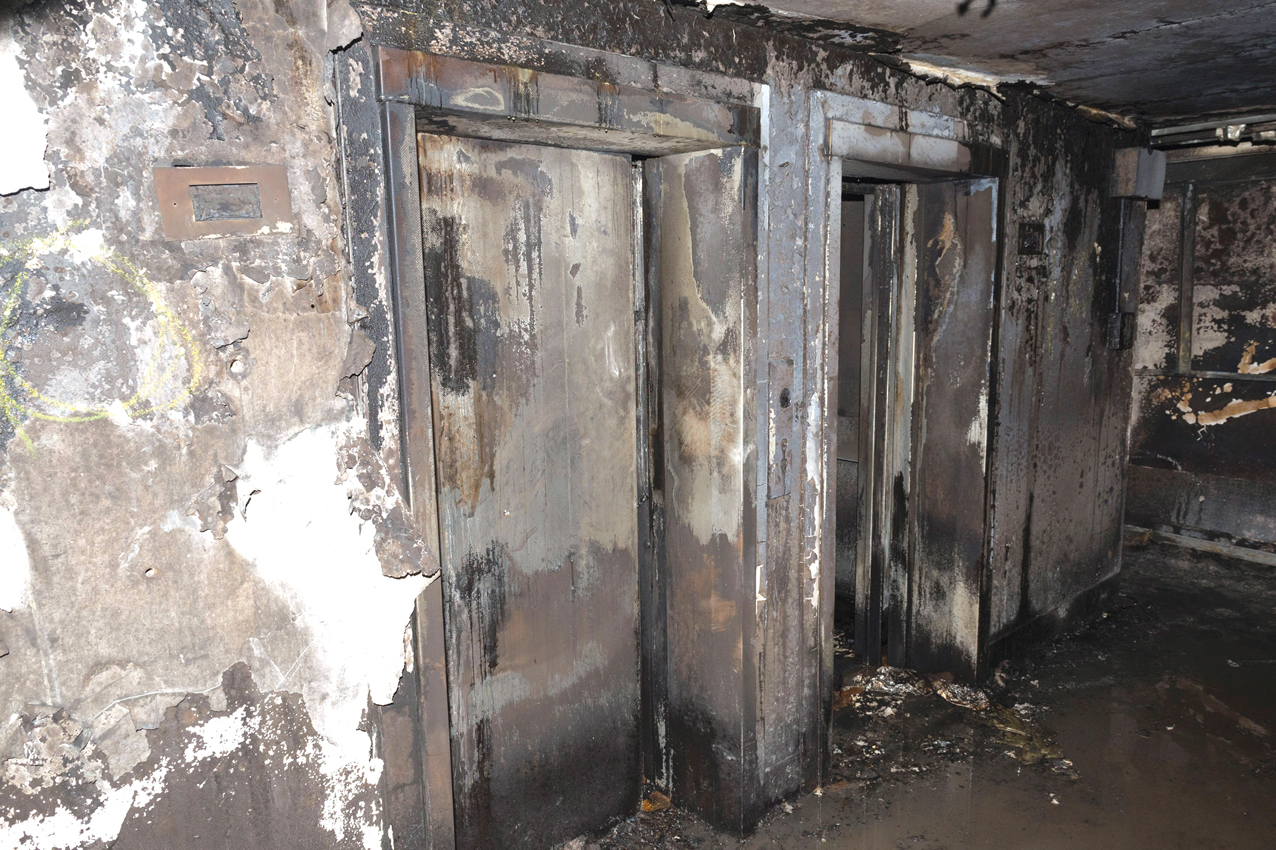 The bespoke system was also found to be faulty, which, Lane said, contributed to the spread of smoke to the single route of escape. She found evidence that the environmental ventilation system – which was required to automatically shut off in fire mode – was not isolated from the smoke system.

Lane’s site inspections found smoke staining within the north and south shafts, indicating that – potentially – AOVs were open on multiple floors, rather than on a single floor as the system intended. So, although a functioning smoke-extract system would not have given complete protection to the escape stairs during the fire at Grenfell Tower, the system was intended to be switched off and restarted on a different floor by firefighters.

‘Had the smoke-control system operated correctly, and the fire service been able to take control, they might have used the system to sequentially vent smoke from the lobbies on each floor of Grenfell Tower,’ Lane told the inquiry.

In its opening statement, PSB UK, which designed the system using depressurisation principles, said its ‘design approach was appropriate, given the limitations posed by the nature of the refurbishment, and that its system functioned effectively when it was commissioned’.

It added: ‘The Building Regulations provide guidance as to how the requirements may be met, while confirming that there may well be other ways of achieving compliance with the requirements – and, thus, there is no obligation to adopt any particular solution contained in an Approved Document if you prefer to meet the relevant requirement in some other way.’

The smoke-control strategy needs to be part of the golden thread, which often gets lost on a job

PSB said that ‘so far as design is concerned, smoke-control systems are, therefore, only intended to address the effects of a fire on one floor’ and that its system ‘could not have prevented smoke from fires on multiple floors impacting lobbies and the common stair on multiple levels’.

Smoke control that protects only one floor is common in the UK, says Kealy, but fire- and life-safety engineers should design robust and simple smoke-management systems, and avoid overly complex systems with the potential for multiple points of failure. In the Middle East, where Kealy has worked for many years, the American National Fire Protection Association (NFPA) standards – which require stairs above 23m to be pressurised – have been adopted.

In a building where sprinklers are installed, the NFPA requires air pressure of 12.5Pa. The equivalent UK code – BS 5588 – requires a minimum of 50Pa. ‘It is almost impossible for a mechanical engineer to engineer this system and make it work,’ says Kealy. ‘That’s why, in the UK, pressurised systems are avoided and alternative systems are used.’

These systems have multiple components, including motorised dampers, AOVs and controls, all of which have their own likelihood of failure, says Kealy. ‘To minimise the risk of failure, engineers should design a system with the least amount of failure points. A pressurisation system is very simple – fans turn on when the signal calls – and protects the stair regardless of fire-floor location. The need for complex firefighter override controls is avoided, with firefighters given a simple start-stop switch.’ 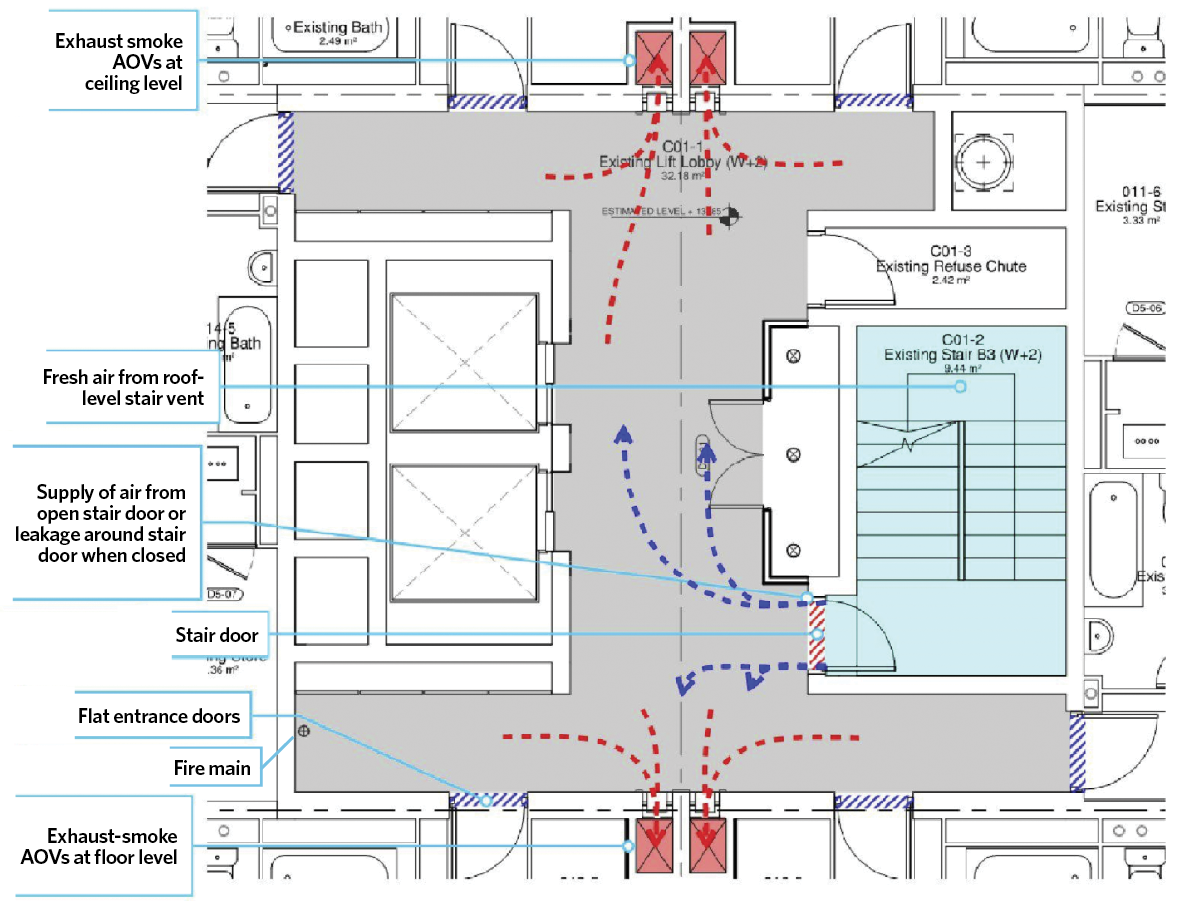 ‘The Approved Documents are not fit for purpose – Dame Judith Hackitt has acknowledged that in her report,’ says Kealy. ‘So, as professional engineers, we must now use codes and standards that are fit for purpose and are internationally respected – for example, the International Building Codes (IBC) and NFPA codes and standards, which I have used for 30 years on projects in the USA, the Middle East and Asia.’

Lane’s report identifies a number of non-compliant and faulty aspects of the fire and smoke-extract systems at Grenfell Tower. The single stair and lobbies – and the fire-safety provisions therein – were not designed to create a safe escape route in the event of a whole-building fire.

The bottom line is, says Kealy, our codes and standards need to change. ‘In the USA, the NFPA codes require residential buildings over four storeys to have another staircase, in case the sprinklers fail.

‘We need to pressurise stairs in tall buildings above 23m, but we need a sensible pressurisation standard,’ he says. ‘I propose that, until such time as the UK ADB are updated to our satisfaction as professional fire engineers, we use NFPA codes and standards.’

Because Building Regulations and standards in the UK are performance-based, engineers are permitted to do this, says Kealy. ‘We should not just design to the bare bone and hope everything works. As engineers and architects, we have to be brave and drive this forward ourselves.’

The single stair and stay-put policy, which dates back to the post-war studies of 1946 – when balconies were provided for escape up to 14 yards (12.8m) above ground level, is out of date too, says Kealy. ‘No other developed country has a stay-put policy for an unlimited-height building where there is a single stair.’

Compartmentation is also questionable these days, he adds. ‘Over time, residential buildings become less fire resistant as we drill holes in walls for TV and internet cables, and change fire doors.’

Kealy believes building projects – especially high-rise ones – should be designed holistically, so that someone has an overview of how all elements, including fire and smoke-protection, work together. ‘That’s called a fire strategy,’ he says. ‘The smoke-control strategy needs to be part of the golden thread, which often gets lost or frayed on a job.’

Marriott International requires all of its fire systems – including smoke control – to be witness tested with theatrical smoke, to ensure all fire systems work as intended. Kealy says: ‘Theatrical smoke is released and we observe the detectors operate, the alarms sounding, the lifts grounding, the smoke extracts starting up and the fans taking smoke out of the building. The fire systems must operate automatically and in the correct sequence. We also walk all the egress routes – as if escaping – to make sure they are clear, signed, lit and have no obstructions.’

Independently testing systems before buildings open to the public is essential, adds Kealy, even if the commissioning engineer’s paperwork says they work.

‘You wouldn’t sell a car without checking whether the brakes work; safety should be taken as seriously in a building,’ he says. ‘As an industry, we have to take the lead and do this ourselves.’ 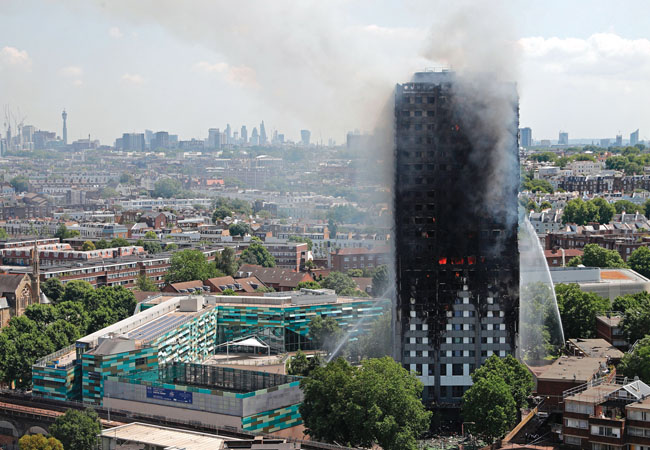 What caused the Grenfell Tower disaster?