Better-quality training and tougher legislation to upskill refrigerant contractors were the key messages at CIBSE Journal’s roundtable in November, held at the Royal Pharmaceutical Society.

The event, sponsored by REFCOM – the register of companies competent to manage refrigerants – focused on the benefits of REFCOM Elite to ensure best practice in air conditioning installation. Other issues debated included: the relevance of the F-Gas registration; making REFCOM Elite mandatory; and educating consultants on specifying the right quality air conditioning equipment to help raise standards in the industry.

Graeme Fox, head of REFCOM Schemes, outlined the background to the register, which began as a voluntary scheme for contractors to show they were working to high environmental standards and were properly trained. After the introduction of the F-Gas regulations, two schemes were formed – the mandatory REFCOM F-Gas certification and REFCOM Elite, the original, more rigorous voluntary scheme. 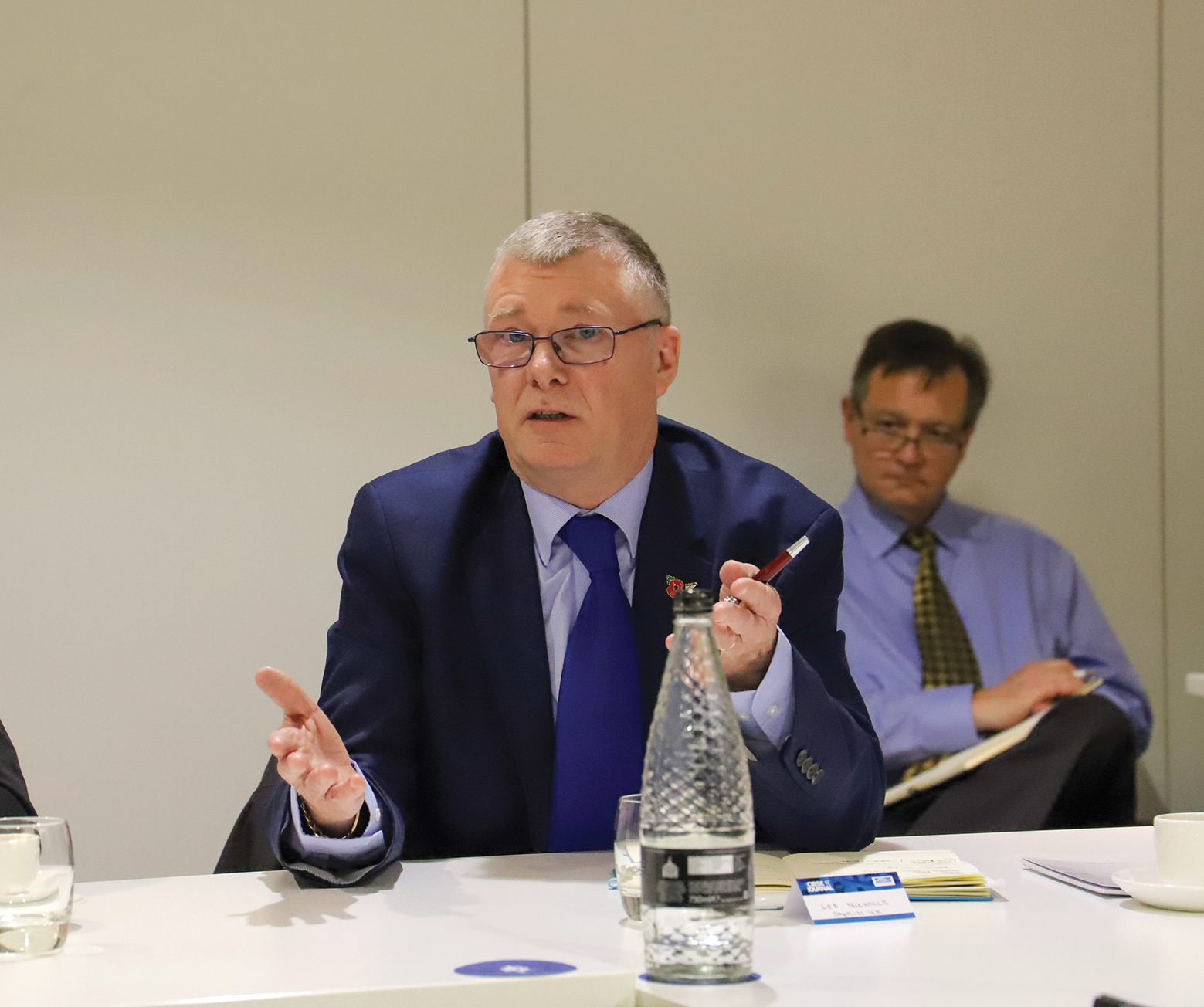 ‘Our concern is that the F-Gas registration doesn’t go far enough in terms of improving the industry and policing it,’ said Fox. ‘We argued at the time with the government that the standard is too low. The F-Gas registration has dumbed down the sector at contracting level and we see a lot of poorly qualified people who call themselves refrigeration engineers when they aren’t.’

The roundtable participants agreed that the current situation was a major concern. Graham Wright, chair of the Air Conditioning and Refrigeration Industry Board (Acrib), argued that the F-Gas registration is not an air conditioning qualification. ‘F-Gas allows an installer to work on the equipment, but it doesn’t necessarily mean that person is qualified to understand how the system works, or assess its energy efficiency or any safety requirements,’ said Wright. ‘It’s brought everyone down to a minimum standard.’

Terry Hussey, director of London Air Conditioning, agreed. ‘It’s a crash course – five days of training and a person can get a gas certificate,’ he said. ‘The City and Guilds course required three years of training – this is what should still be required.’ 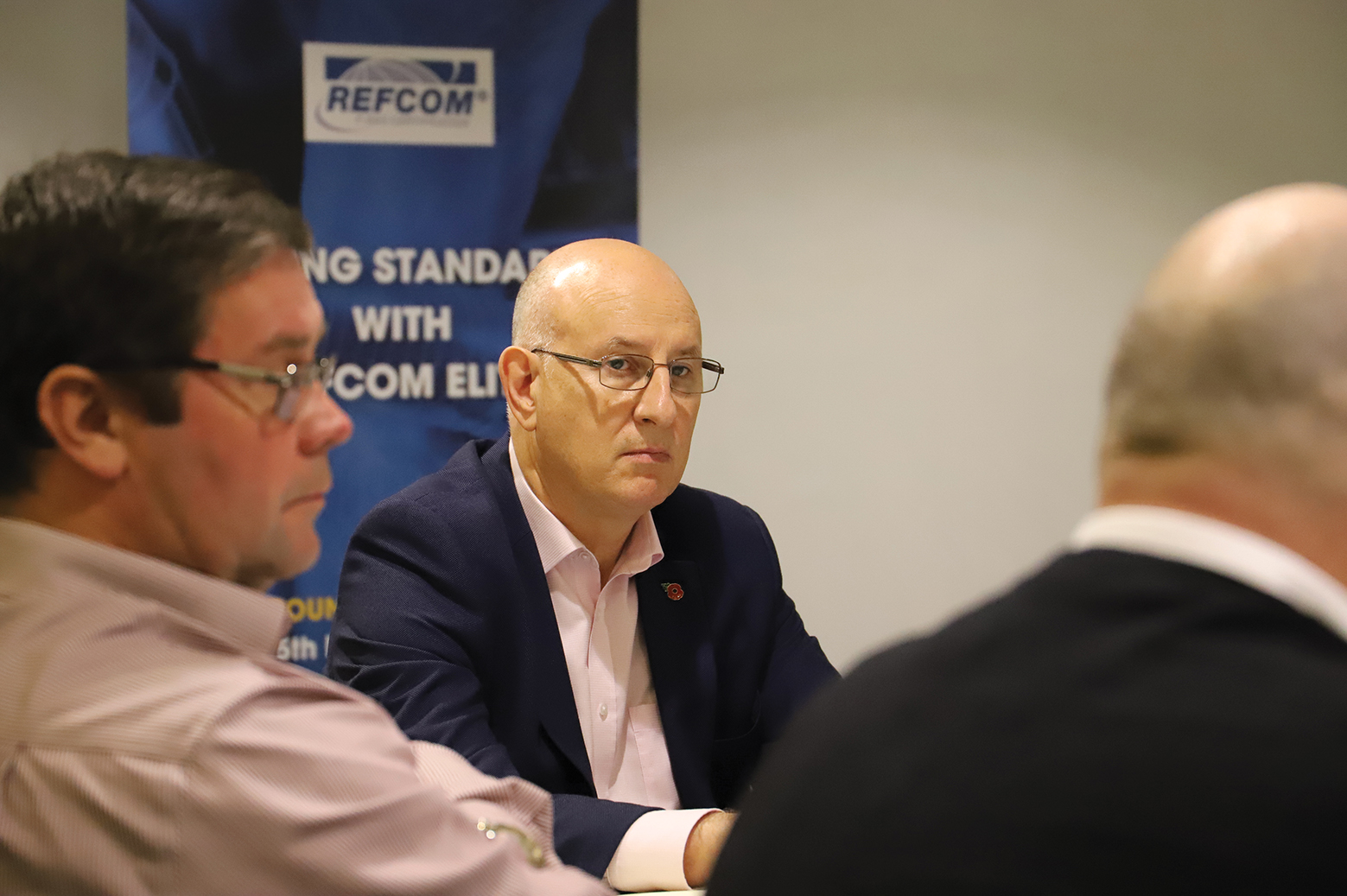 The outcome, according to participants of the roundtable, is that an F-Gas qualified person often has no understanding of how to operate a system, how to interrogate it, and how to fault-find correctly – all essential skills if properly qualified. ‘Let’s not forget that air conditioning systems are far more sophisticated today than they were 10 years ago,’ added Wright.

‘The innovations put into these systems to make them efficient and try to reduce refrigerant charges is substantial. For someone to turn up and say they are an air conditioning engineer is probably pushing the limits of reality, but this happens a lot.’

‘The knock-on effects are not just with the air conditioning systems,’ said Wayne Buckley, managing director of Temperature Control. ‘The efficiency of the building where offices are not cooled or heated properly is also affected. We’ve had to fix faults done by others where equipment hasn’t been installed properly. They’ve put in some gas and they think it’s running, but it’s not. There are cost implications and legal aspects to this.’ 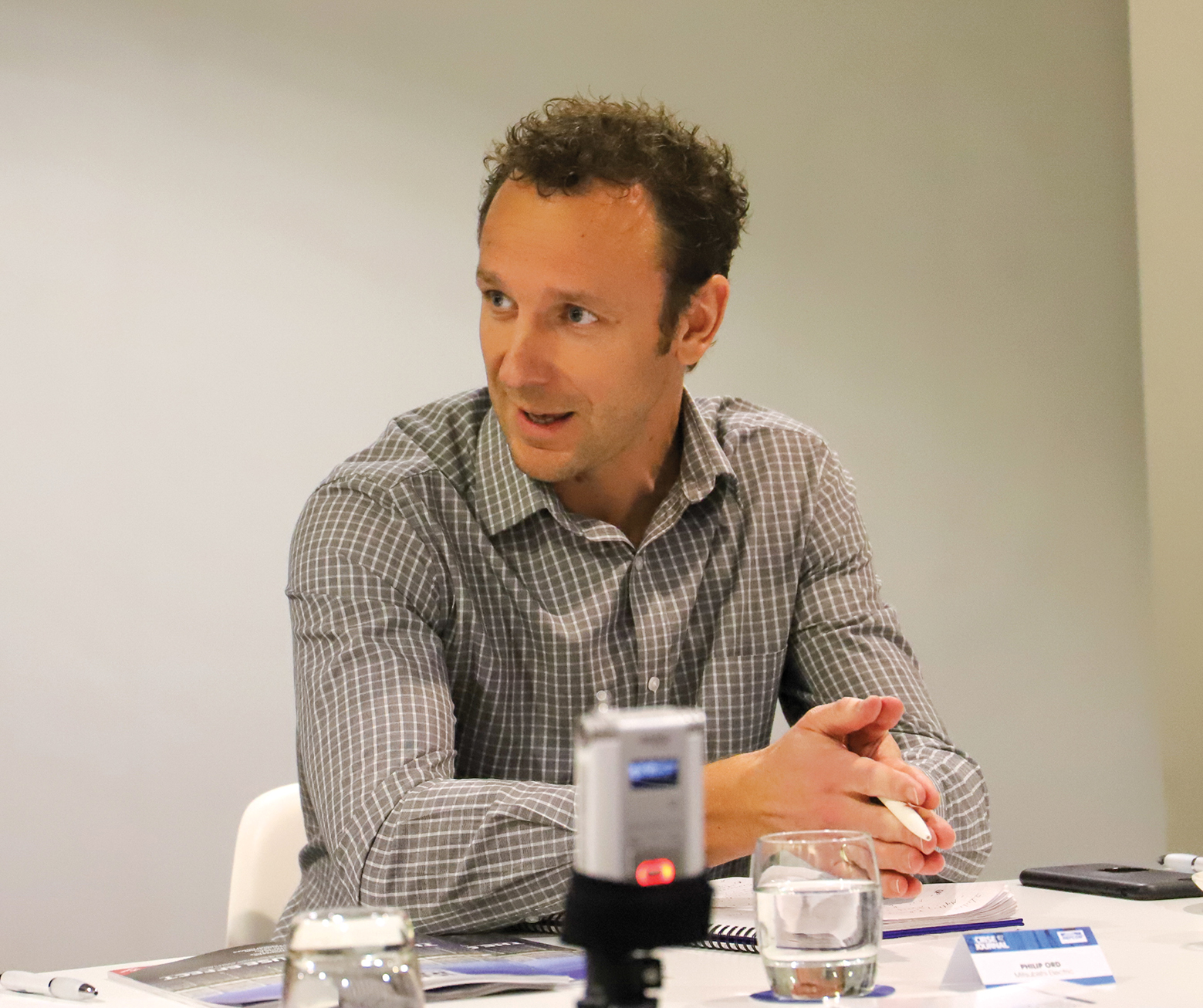 Buckley added that backing REFCOM Elite can have its challenges. He said his company works hard to maintain high standards, collaborating with manufacturers to get the highest levels of workmanship, but they are often competing against unskilled contractors who undercut. This can result in unsatisfactory installations of systems, leading to poorly performing equipment, leakages and other problems. He cites an example of a project they lost to another contractor; four years later, his firm was invited to fix an array of major problems.

‘The project cost increased from £1.4m to £2.1m because of the faults, and the systems went from having 10 complaints a day to 10 per year after we had finished,’ said Buckley.

‘Half the pipework had to be changed and fundamental engineering processes weren’t followed, such as understanding pipework schematics, pipework sizes and refrigerant charges. This is why it’s so important to have a quality product, installed by a quality contractor. Sometimes, the specification isn’t correct, which is often bypassed to get that commercial edge and all the benefits of a proper system are lost.’ 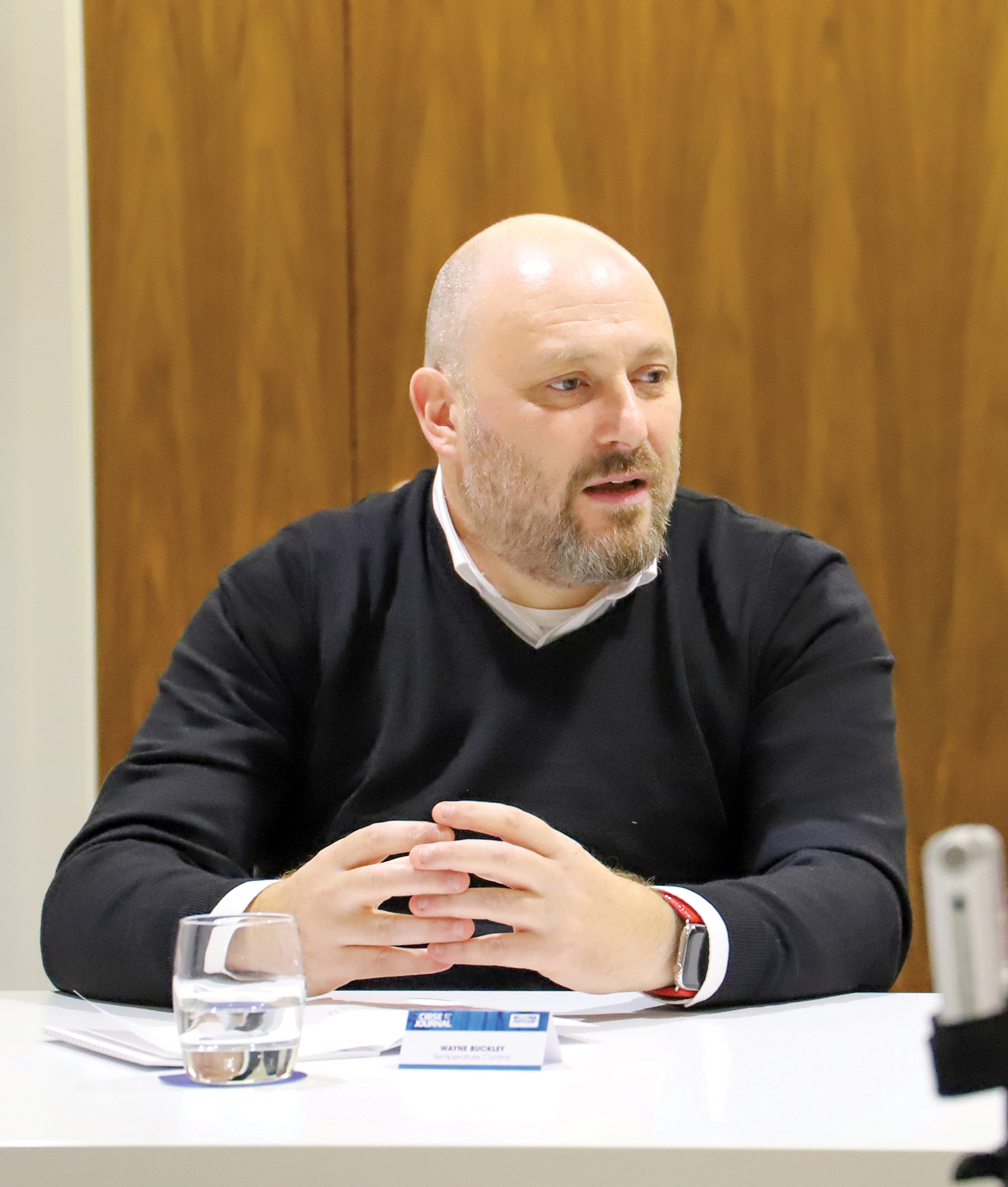 Lee Nicholls, director of Daikin Air Conditioning UK, also highlighted that poor workmanship by unskilled installers can damage a manufacturer’s reputation: ‘While we make quality products that are perfect in the factory, as soon as they are put in the field they are only as good as the installation.’

F-Gas requires refrigerant manufacturers to focus on energy efficiency and reduce carbon dioxide emissions to lower their products’ global warming potential (GWP), but as Phillip Ord, head of marketing and sales strategy at Mitsubishi Electric, said, if the system isn’t installed correctly, and isn’t serviced or maintained, then the carbon dioxide running costs over the equipment’s life-cycle will be astronomical.

‘A poorly installed and maintained air conditioning system can result in a 20% to 30% reduction in efficiency of that equipment,’ added Wright. ‘The Institute of Refrigeration has said that a variation of between 5% and 10% on refrigerant charge can change efficiency by at least 10% – and that’s on smaller systems.’

Everyone agreed that problems occurring in the systems can also be the result of insufficient maintenance – such as not cleaning pipework and filters – can contribute significantly to reductions in an equipment’s efficiency.

‘An F-Gas certificate is different and many consultants don’t understand that,’ said Otterson.

Wright said a way to police this could be to check a CSCS card; if they don’t have one, they are not qualified to do the work.

A more serious issue for consultants to address, said Ord, is that as the GWP of refrigerants is lowered to use hydrocarbons, the flammability increases. He argued that an F-Gas-qualified contractor is not allowed to install an R-32 refrigerant given the safety concerns of dealing with this equipment.

‘This is where the education of the consultant is necessary,’ said Ord. ‘They need to make sure the contractor is REFCOM Elite certified, because this is a standard whereby the person is qualified to install this hermetically sealed system and commission it.’

‘It’s an important point that industry needs to get its head around because of the environmental consequences of using refrigerants with lower GWPs – the safety criteria has to be clearly understood,’ said Wright. ‘Manufacturers, such as Daikin and Mitsubishi, have done a lot to raise people’s awareness of this, but we need the whole industry to get to a certain level to ensure we meet the safety standards.’ Wright and Fox are in discussions with the Department for Environment, Food and Rural Affairs (Defra) about the possibility of implementing training courses on flammability and establishing the skills and level of competency required.

‘The F-Gas qualification allows contractors to legally work with R32 equipment, but it doesn’t cover people under the Health and Safety at Work Act,’ said Fox. ‘That’s crucial for employers, because they have to be sure a person is competent to carry out the task. If they haven’t had any training in flammable refrigerants, and they have been asked to install or service a R32 system, then it’s very difficult to prove that competence.’

As Buckley argued, however, to raise standards and competency, they [contractors] need more support from specifiers. ‘We’ve been pushing to get D1+ with Daikin, and Diamond Quality Partner (DQP) status with Mitsubishi, into a specification,’ said Buckley. ‘But the consultants don’t want to do this because of competition; they want to push the market open so they can get the right price, but – by undercutting the investment – this is failing the construction industry.’ Ord and Nicholls said there’s only so much they, as manufacturers, can do on site.

They can carry out spot-checks on contractors to make sure installations are done correctly, but they would not be able to audit every site, as there are too many, and not enough REFCOM Elite installers (there are currently 283). Perhaps the solution, suggested Paul Brant, deputy managing director at Adcock Refrigeration and Air Conditioning, is to make REFCOM Elite mandatory. ‘The problem is that it’s voluntary, so only a small number of contractors will do it,’ said Brant. ‘We want to make it mandatory to increase the numbers.

If specifications say that you need to be REFCOM Elite, and it’s policed, there will be a drive for it, which would raise the standard across the whole contracting base.’ Fox agreed. ‘You will get more than the 6,000 [REFCOM installer] companies stepping up, because they will want that business. They will then have to prove they meet that criteria and up their game,’ said Fox.

Nicholls supported this move, especially if it raises the industry bar, but upskilling to REFCOM Elite will cost extra money. Daikin’s D1 and D1+ partners have a fund that can be used by staff to improve their skills. ‘It’s crucial that the people who design refrigerant systems understand they are responsible for ensuring the people are qualified to do the job,’ said Wright. ‘Building Regulations and compliance guides are an opportunity for the industry to grasp this thing and move forward at a more professional level.’

Nicholls added that, to professionalise the industry, the Building Regulations need to be changed, along with the specifications. ‘Long term,’ said Ord, ‘we need legislation. There has to be some stick involved, as well as the carrot. Legislation underpinning consultants’ design could make a difference in helping consultants stay strong to be specification compliant when there are commercial pressures.’

‘We hope the latest Building Regulations [due end of 2020] will drive that change and mandate upskilling across the board,’ said Fox. ‘We have to raise standards where we can. It’s a really positive sign that we [roundtable participants] are all singing off the same hymn sheet. We now need to get this message out, so the rest of the industry realises it has to get on board.

REFCOM Elite membership proves to owners and operators that a refrigeration or air conditioning company: