The boiler is at the heart of most institutional and commercial buildings, to provide the heat for hot water and space heating. This article will consider the key drivers for deploying condensing gas boilers, and explore some of the principal control requirements to ensure effective operation and to minimise environmental impact.

Condensing gas boilers, whether fuelled by natural gas, or potentially by hydrogen, are forecast to be the predominant heat source for European buildings for many years to come, as indicated in the data produced for the latest EU Ecodesign review, shown in Figure 1. 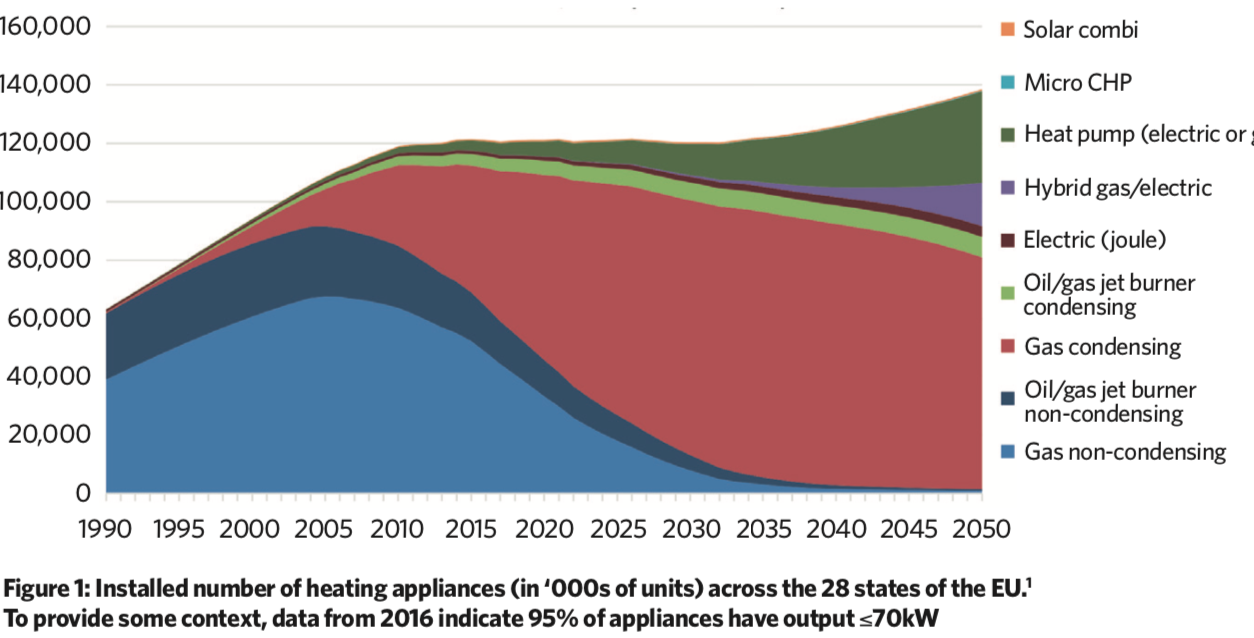 The minimum performance for a boiler is typically set by codes and standards. Across the EU (including the UK), the Energy-related Products Directive (ErP) leads the regulations of individual member states that, in the Ecodesign regulation EU 813/2013,2 sets efficiency standards for boilers that have an output power of less than 400kW.

The Medium Combustion Plant Directive (EU 2015/2193) sets limits for appliances over 1MW thermal input up to 50MW. The various UK Building Regulations determine the requirements for 400kW to 1MW (such as the Non-Domestic Building Services Compliance Guide3).

Manufacturers indicate this performance based on calculation methods that apply factors providing standardised interpretations of how the boiler will perform seasonally, such as those explained in EU communication 2014/C 207/024 and BS EN 15502-1:2012+ A1:2015.5

Aside from specific installations (in applications with shared chimneys), the requirements of the ErP effectively restrict the majority of non-renewable heating installations to condensing gas boilers.

However, the ErP performance metric is based on an idealised set of parameters that are unlikely to wholly reflect the vagaries of real applications. Ensuring that an installation provides expected performance requires appropriate design, which crucially includes a properly considered control strategy and suitably informed end-user operation and maintenance.

Figure 2 indicates the operating efficiency of a typical commercial condensing boiler at different loads and return water temperatures. Unlike non-condensing boilers, the performance will increase at part-load – this would allow the boiler to operate typically below 20% full load several per cent more efficiently than at full load. Similarly, as the temperature of the return water reduces, the efficiency of the boiler will increase. There are inflexion points in the efficiency characteristic of Figure 2 at around 54°C and 27°C – respectively, the points at which condensation commences and the temperature where condensation will be at a maximum. 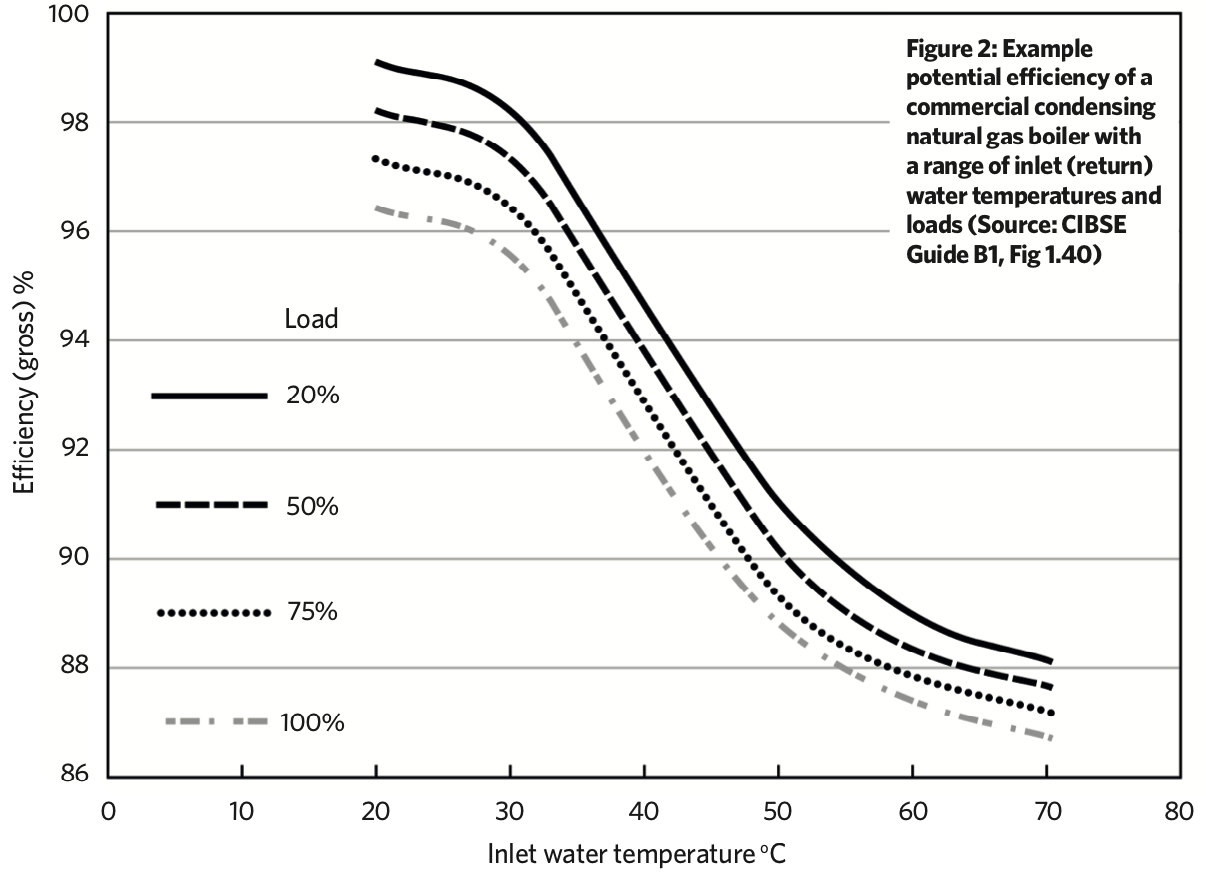 Radiator heating systems can be readily selected so as to return water that is below the condensing temperature. In refurbishment projects, the inherently oversized existing systems typically allow lower mean water temperatures and are still able to meet heating loads and so enable operation in the condensing range.

This might suggest that the most thermally effective option is to use one large well-sized boiler to serve a building, knowing that for practically all the time of operation the boiler will be at part-load, and so be able to operate at a higher efficiency. (This is the opposite of the technique employed for non-condensing boilers, where the efficiency will decrease as the load reduces.)

However, the use of a single boiler will increase the risk of total system failure (as there is no redundancy), limit the opportunity for planned maintenance, and also restrict the minimum possible turndown to that of a single boiler module. Installing multiple boiler modules will not only increase redundancy – and so reduce the problems arising from failure or maintenance – but also increase the available turndown potentially to a very few per cent of maximum load.

Boilers should not cycle excessively, as this increases thermal losses and increases the output of NOx.6 The efficiency benefits of continuously operating multiple condensing boiler modules at reduced load – rather than cycling fewer boilers at higher outputs – will mean that, as discussed in more detail in section 10.1.2 of CIBSE Guide F,7 it is generally more efficient to modulate all boilers in ‘unison’, compared with a step control (which would attempt to minimise the number of operating boilers).

Unison control would, for example, control three separate boiler modules as in Figure 3. As the load drops below the minimum turndown for a single module, the control could sequentially switch off modules or, to prevent such cycling, make use of a buffer load. 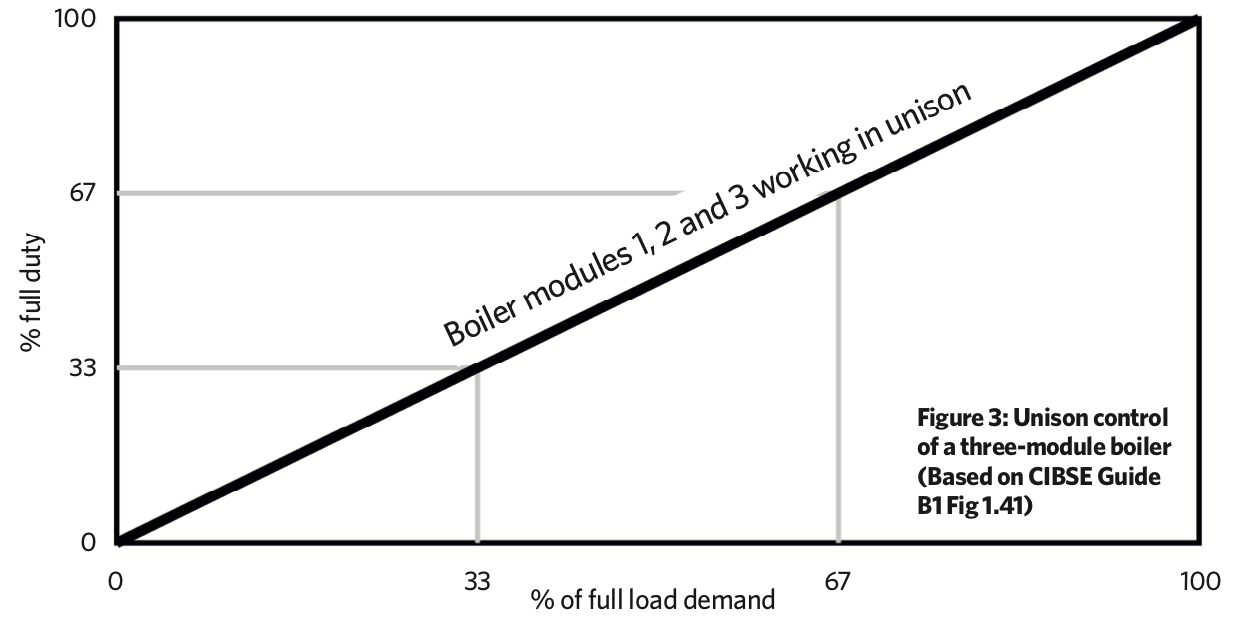 Most modern boilers will accept a 0-10V control input to modulate the boiler output directly, or to adjust the setpoint of the boiler or incorporate their own master/slave control system.

The flow water temperature feeding the building heating system may be dynamically controlled with weather compensation. This will reduce the boiler flow setpoint and/or the temperature in separate zone circuits as the outdoor (ambient) temperature increases, as illustrated in the example simple optimiser schedule in Figure 4.

This can provide feed-forward control of the space conditions as well as reduce the thermal losses from the distribution systems. Historically, this was principally delivered through separately pumped secondary mixing heating distribution circuits, while maintaining a notionally constant boiler supply temperature in a primary header circuit.

Since modern gas boilers are able to modulate output temperatures – rather than simply being on/off – the compensation can be usefully applied to condensing gas boilers with a 0-10V control input to reduce the boiler supply temperature at higher outdoor temperatures. 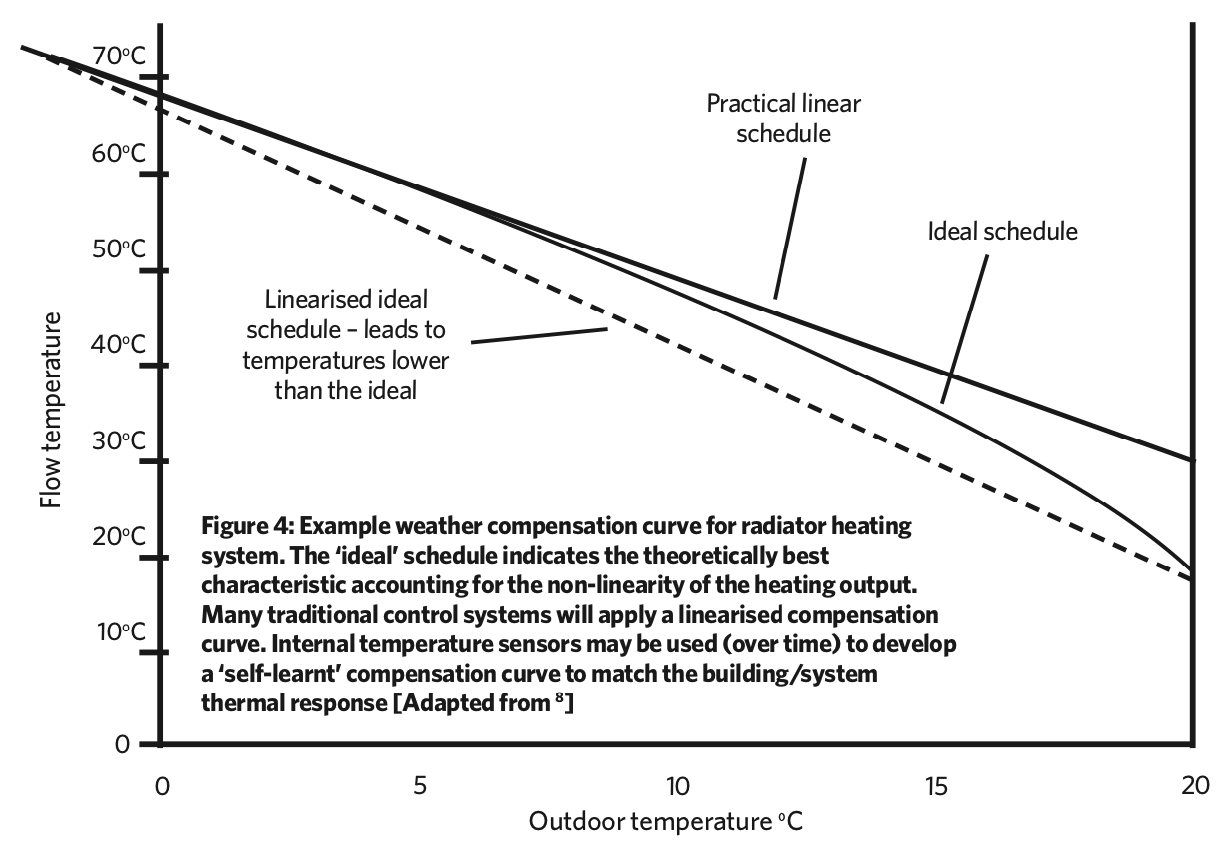 As discussed in section 5.9 of CIBSE AM14, a ‘fully integrated zone and boiler control system will determine the highest zonal water temperature at any time and then directly compensate the boiler to achieve this temperature. Zones requiring lower temperatures will use three-port mixing valves to reduce the temperature in these zones. Weather compensation can provide low return water temperatures in milder weather, allowing condensing boilers to operate at higher efficiencies’.

Intermittent heating, typically with a reduced unoccupied temperature, can save considerable amounts of energy for many buildings.8 The time at which the plant must operate so as to provide acceptable internal temperatures for the occupied period will be a function of the internal and ambient temperature for a particular building. This would typically be facilitated with ‘optimum stop and start’ control.

As discussed by John Hammond (Letters, CIBSE Journal, October 2018 ) there can be an advantage in employing excess boiler capacity, as may be available at many times when using modular condensing gas boilers, to reduce seasonal heating requirements. In appropriate applications (particularly in buildings with lower thermal inertia), the pre-heat period (prior to full building occupation as part of an optimum start routine) is reduced, so dropping the average internal temperature over the heating day, and hence reducing total seasonal heat loss and energy use.

As noted in CIBSE Guide B1 section 1.5.3.6, there is a balance of pros and cons to increasing the ‘plant size ratio’ and there ‘is therefore an optimum plant ratio based on total life-cycle costs. This requires an assessment of annual energy and capital costs for different plant ratios using a discounted cash-flow method. Alternatively, a life-cycle carbon emission assessment may be preferred’.

The benefits of condensing modular gas boilers will only be maximised if they are set up and controlled correctly. The overall efficiency of a multiple boiler plant will depend on how closely total output can be controlled to match the load profile of the building. CIBSE AM14 notes that ‘sophisticated strategies can be developed with advanced control systems.

However, as highlighted by CIBSE Guide H, ‘unsuitable control strategies for boilers can lead to inefficient and problematic operation’, so it is important to consider carefully the operational needs of the specific application when establishing the control regimes.

This control can be carried out at the boiler and through a building management system (BMS) that, in turn, can be internet connected – so allowing remote control, monitoring, fault diagnosis and alerts. Some manufacturers integrate networkable controllers into the boiler packages that have been designed to optimise the boiler operation across the life-cycle of that specific boiler system. 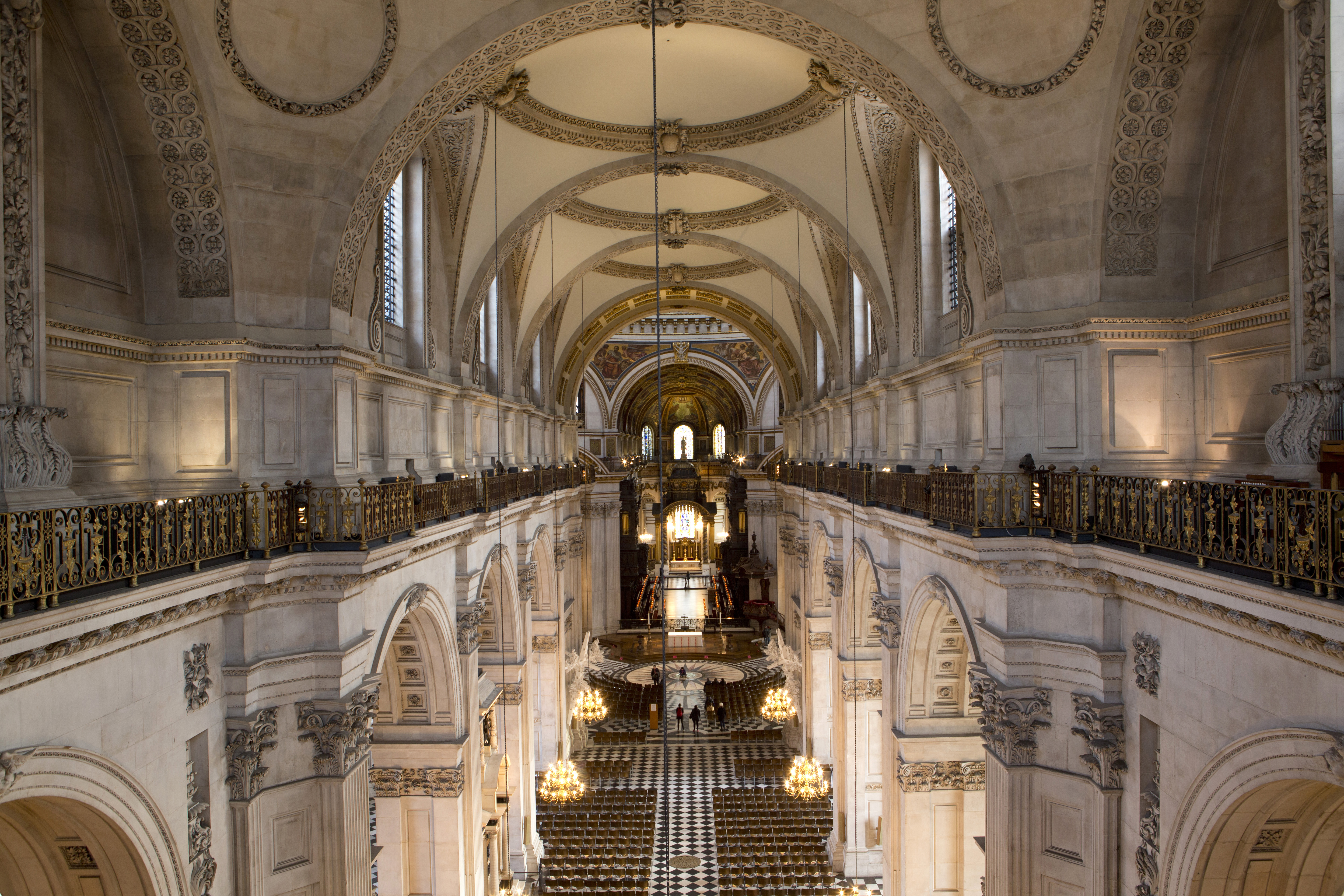 Figure 5: The refurbished heating system in St Paul’s Cathedral required controls that are able to account for the building thermal inertia.

As well as maintaining safe boiler operation, such an integrated controller is able to work in a master/slave arrangement to provide time and temperature managed unison and sequence control across several boiler modules. This would allow zoning of several heating circuits together, with weather compensation based on input from ambient, room, flow and return temperature sensors.

Together with the other control parameters, domestic hot water control priority (with daily anti-legionella boost) can be set through the local user interface or from local or networked connected devices.

The controller will also provide the interface and management for ancillary items such as pumps, circuit valves and buffer tanks, maintaining the most effective operation to deliver the best performance for the system. Some systems also include provision to control multi-mode heat generation, so as to usefully employ renewable heat sources.

Such controls can be adapted and integrated with existing heating distribution systems, as the equipment being controlled normally requires on/off control.

For example, the two banks of dual 254kW condensing gas boiler modules (including integrated and networked controls) with a total maximum output of up to 1,016kW, as shown in Figure 6, were recently installed in St Paul’s Cathedral (Figure 5) and are able to provide a 20:1 turndown, serving the legacy heating
system and a new fast-recovery domestic hot water calorifier.

2 Commission Regulation (EU) No 813/2013 of 2 August 2013 implementing Directive 2009/125/EC of the European Parliament and of the Council with regard to ecodesign requirements for space heaters and combination heaters – EU Document 32013R0813.