In many UK areas, the heating of water will lead to the accumulation of limescale. This can reduce the effectiveness of heat transfer surfaces as well as obstructing the flow of water in the system, and can practically lead to system failure. This CPD will explore what causes limescale and how it might be prevented in modern continuous-flow gas hot-water delivery systems. It will consider the potential for the application on electrolytic physical water conditioning.

Previous articles (including those in April and September 2017) have considered the application of such systems, such as those in Figure 1, to supply hot water efficiently. However, unless the incoming water supply is in a proper condition, the performance can degrade (as with all hot water systems), as limescale will accumulate. 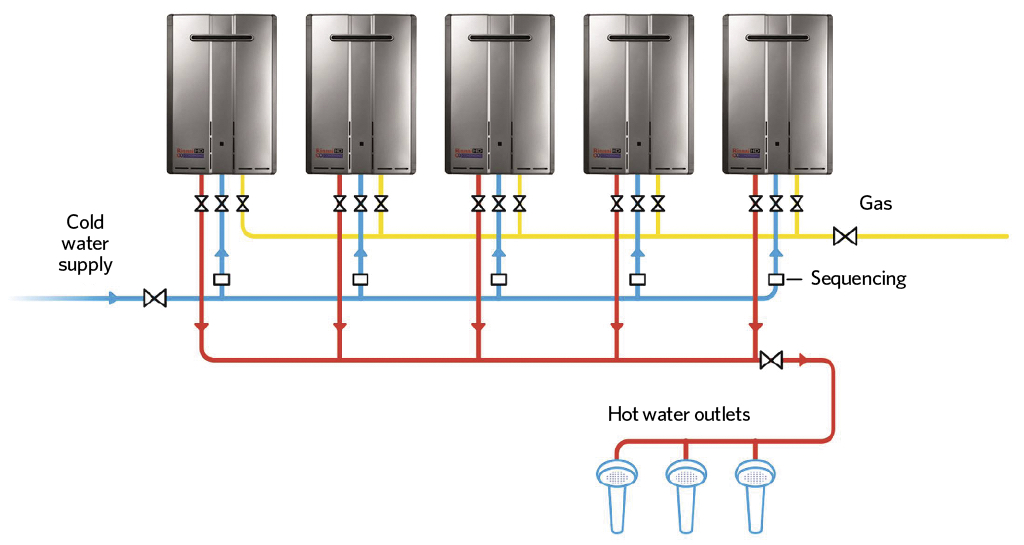 Water absorbs carbon dioxide to create the relatively weak carbonic acid, H2CO3 and, as the water comes into contact with rock and sediment – the most likely being limestone and chalk – it acquires metal ions, most commonly calcium, Ca, and magnesium, Mg. So most water that comes from streams, lakes and boreholes can be regarded as dilute solutions of these – calcium bicarbonate, Ca(HCO3)2 and magnesium bicarbonate, Mg(HCO3)2.

Both calcium and magnesium are essential minerals that are beneficial to human health in several respects, and inadequate intake of either nutrient can result in adverse health consequences. Recommended daily intakes of each element have been set at national and international levels.1 However, at elevated levels the water becomes ‘hard’. Hard water can make tasty drinking water, as it contains many salts and minerals, but that hardness will also combine with soaps and detergents to create scum (and also reduce the lathering effect of soap) and precipitate as scale. 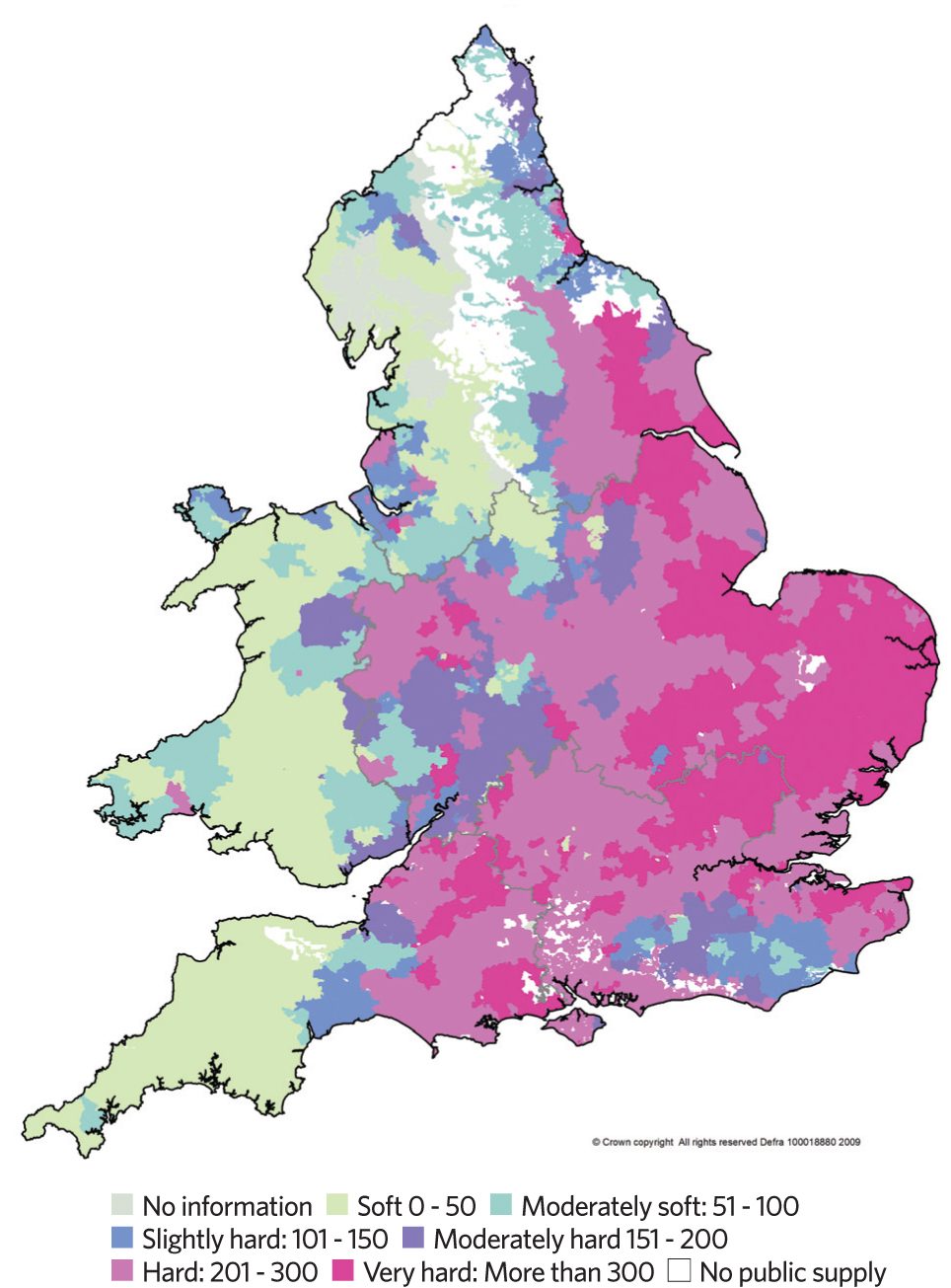 In hot-water systems, practically precipitation of calcium carbonate, CaCO3, starts to occur at approximately 35°C to 40°C (or as pressure drops), and progressively worsens as temperatures rise. The carbonates are deposited as off-white solids on the inside surfaces of pipes and heat exchangers. Water hardness is expressed in terms of milligrams per litre as calcium carbonate. Temporary (carbonate) hardness is related to the bicarbonate salts of calcium and magnesium. Permanent (non-carbonate) hardness is related to other salts of calcium and magnesium – chlorides, sulphates, nitrate, and so on (see panel ‘Water hardness’ below).

There are no standard levels as to what constitutes hard or soft water. As can be seen from the example information for England and Wales in Figure 2, hard water is likely to affect significant parts of the UK (water in Scotland is generally soft to moderately soft). When the total hardness is approaching and exceeding 200mg·L-1, water softening or conditioning would normally be considered. Specific water hardness data2 is available from local water supply authorities and local testing.

As the temperature of water is raised, the hardness will be cut as some of the bicarbonate dissolved salts (temporary hardness) comes out of solution and forms solids in suspension. Some of this will be deposited on heating surfaces to form an adherent limescale, reducing the heat transfer. Fuel consumption can increase, and the hot-water heating unit or system can deteriorate through the overheating of heat exchanger plates. The UK’s Health and Safety Executive (HSE)3 notes the importance of reducing the opportunity for scale accumulation, both for system efficiency and to reduce the supply of nutrients and breeding locations for bacteria, such as legionella.

The tendency to form scale – and the structure of that scale – is not just dependent on hardness, but also on the other chemical constituents and temperature of the water. So, scaling indexes such as Langelier Saturation Index (LSI) combine various additional factors to assess the likelihood of scaling (as well as corrosion). The LSI provides an empirical measure of the water system’s likelihood to dissolve or deposit calcium carbonate, and is dependent on pH, calcium concentration, total dissolved solids (determining conductivity) and water temperature. An LSI of zero indicates balanced water, with an appropriate amount of calcium and dissolved solids, and stable pH. Negative LSI indicates that the water is approaching aggressive (and so will not deposit a layer of calcium carbonate), while positive LSI indicates increasing opportunity for scale formation. Indicative ranges of LSI are….

The insoluble calcium carbonate is the principal component of what is known as limescale.

Permanent hardness is usually caused by the presence of calcium sulphate/calcium chloride and/or magnesium sulphate/magnesium chloride in the water, which do not precipitate out as the temperature increases. Unlike temporary hardness, it is not removed by heating the water.

The LSI was initially developed to quantify presence of a thin layer of scale that is usually beneficial in the prevention of corrosion of metallic piping.

Reduction and prevention of limescale

The most common water-softening process used for the protection of commercial hot-water systems is base-exchange (or ionic) softening. This process removes permanent and temporary hardness from water. It works by a simple chemical process – swapping the calcium, which forms limescale, for sodium, which is more likely to stay dissolved.

A typical water softener has a resin (or mineral) tank, a brine (sodium chloride and water) tank, and some form of control, as shown in Figure 3.

As water enters the system, it passes through an ion-exchange column filled with thousands of tiny resin beads. This resin has charged sodium attached to its surface, and swaps this for the more reactive calcium and magnesium as the unconditioned water flows over it. The resin can continue to do this indefinitely, as long as it is washed through with brine at intervals to remove the calcium and magnesium and replace the sodium.

During periodic regeneration cycles, the water is passed across salt in the brine tank and then pumped across the resin beads. As it flows through the resin bed, it exchanges sodium for the hard-water ions, regenerating the electrical attraction of the resin beads. Excess brine is then rinsed from the resin and sent to drain. It is important that the water softener should regenerate only when needed, according to the incoming water hardness and volume of water that has been processed. The resin bed will also need appropriate dosing to ensure that it does not accumulate bacterial material. 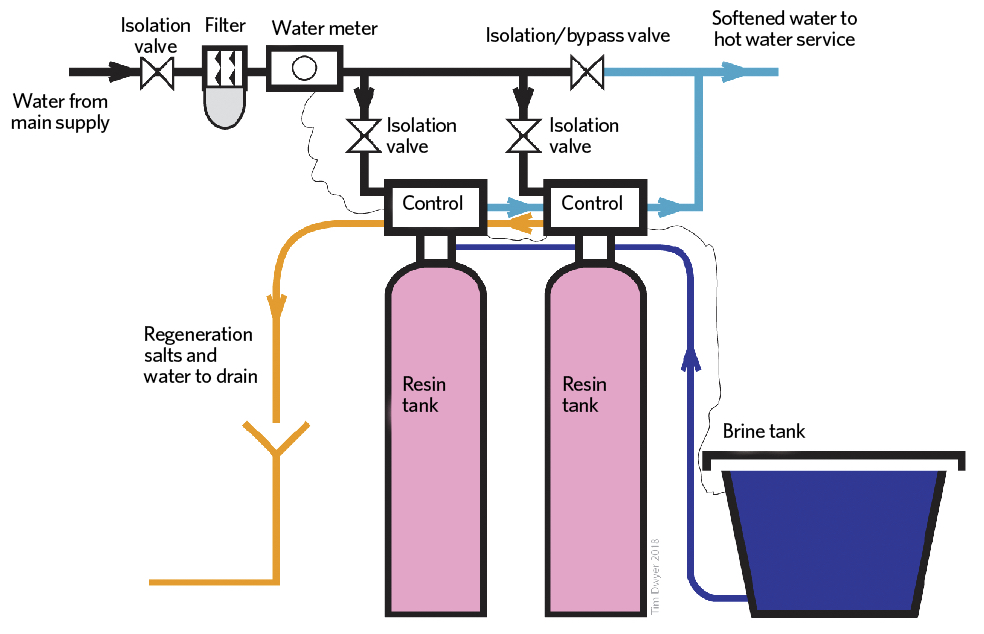 This whole process has a permanent effect on the incoming water, but will consume significant amounts of salt and water in the softening process. Since the softened water will have relatively high levels of sodium, a separate, untreated, water supply will be required for drinking water. Sodium salts are soluble, so the resulting water will not generate scum or scale.

Physical conditioners generally rely on electric or electromagnetic fields acting on the water to modify the physical structure and size of hard-water crystals. As a result, the ability of the crystals to cling to each other or to surface walls of the pipe or equipment is substantially reduced, so that limescale can be kept in suspension and discharged with the flow of water from the outlet. These systems do not use significant amounts of chemicals and do not change the composition of the water, so it still remains hard, but they reduce the rate at which the scale precipitates out. As listed in CIBSE Guide G4, there are five principal types of physical water conditioner:

Magnetic: these use a magnetic field and alter the scale-forming minerals to combine with each other rather than form scale, but the effect is short lived.

Electromagnetic: a strong magnetic field is generated, which is much stronger than the simple magnetic devices.

Electrostatic: in these, an electric field is created by flow of water through the conditioner, which causes the ions to repel so that scale-forming minerals do not combine.

Figure 4: Example of electrolytic water conditioner assembly. The incoming mains water is dosed with tiny amounts of zinc so that the more amorphous aragonite (rather than calcite) is formed when the water is heated

Electronic: by generating a low-power electrical current, controlled by a microprocessor, a variable electrical field is developed in the water that prevents build-up of scale by altering the shape of scale-forming mineral crystals.

Electrolytic: these prevent scale forming by the use of minute amounts of dissolved metal (usually zinc or iron).

If the water is conditioned temporarily through ‘ionisation’, this will be lost if the water is stored. In all physical conditioners the limescale is held in suspension and discharged at the outlet, so there will still be evidence of limescale where the water evaporates, such as shower heads and screens, and stainless-steel sinks and surfaces. Physical devices do not add sodium (or appreciable amounts of any chemicals) to the water, so it is still potable and wholesome. Significant turbulence can adversely affect performance and limescale formation – for example, where there are tight bends in the system that cause the pressure to drop.

While the theoretical and practical aspects of softening and chemical conditioning are well understood and established, the scientific principles behind physical conditioning are not fully understood.5 However, it is reported by Yang6 that, at least, electrolytic conditioners are ‘consistent with established science. Dissolved zinc and iron and known scale inhibitors, impacting significantly on the crystal form, even at concentrations as low as a few ppb’. 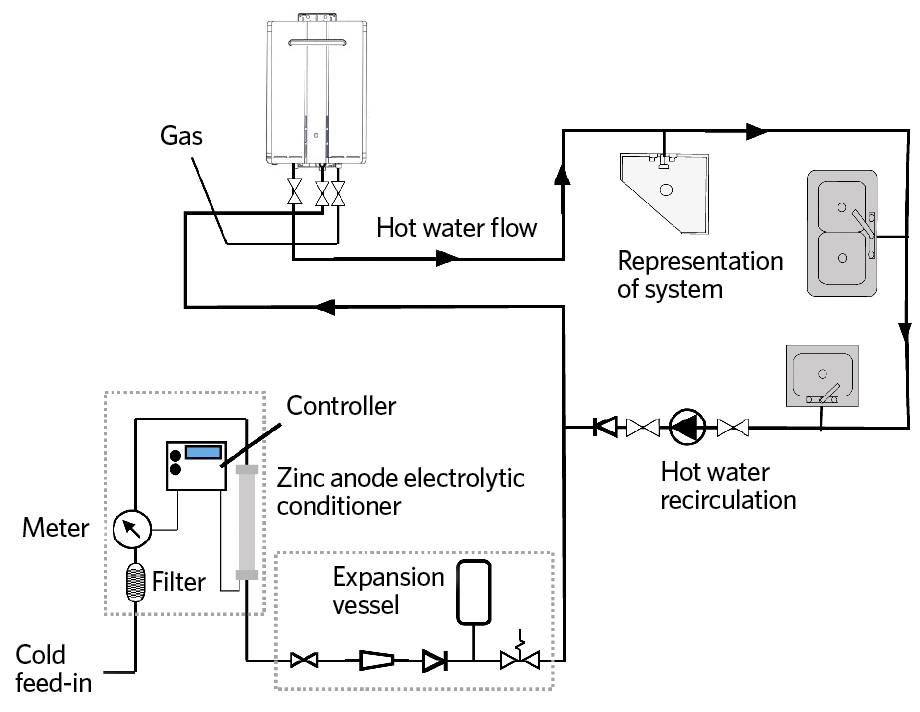 There is much experiential reporting that physical – and particularly zinc electrolytic conditioning – has been successfully applied.

A zinc sacrificial anode is enclosed in an inline cylindrical pipe that is incorporated in the incoming water supply (as in Figure 4). This doses the water with tiny amounts of zinc (a few parts per billion) sufficient to alter the structure of any precipitating limescale from calcite to aragonite. These are polymorphs of mainly calcium carbonate  –that is, they have the same chemical formula – but have different crystalline structures. The change in the shape of crystals reduces the adherence to surfaces as scale.

Incorporation of physical electrolytic conditioning systems (such as in Figure 5) have, reportedly, provided operational advantages over water-softening systems by virtue of their comparative simplicity. The reduction in installation space, very low maintenance requirements and, particularly having no need for salt or regeneration water, make them significantly cheaper to operate.

The use of both water softeners and physical conditioners can, if applied appropriately, maintain systems practically free of limescale. For hot-water systems with significant storage – particularly where stored longer than 24 hours – the changes effected by physical conditioners tend to subside, so the system may be increasingly likely to accumulate limescale. However, zinc-based electrolytic physical conditioners are well-suited to continuous-flow water systems where there is no storage – or even systems that incorporate short-term buffer storage. Such high-efficiency gas-fired continuous-flow systems are commonly used, for example, in hotels that deal with peak demand without storage, or with short-term buffer storage, and so present a good opportunity to investigate the application of zinc-based electrolytic physical conditioners.