Despite the carbon intensity of the UK’s grid-supplied electricity hitting all-time lows over the past few months, there are still good opportunities to apply small-scale combined heat and power (CHP) for commercial and institutional applications in the country, both to save money and reduce carbon emissions.

This article will develop aspects of earlier articles covering CHP, particularly in relation to assessing the viability for small-scale CHP in the UK (See Module 98, August 2016 for complementary information). 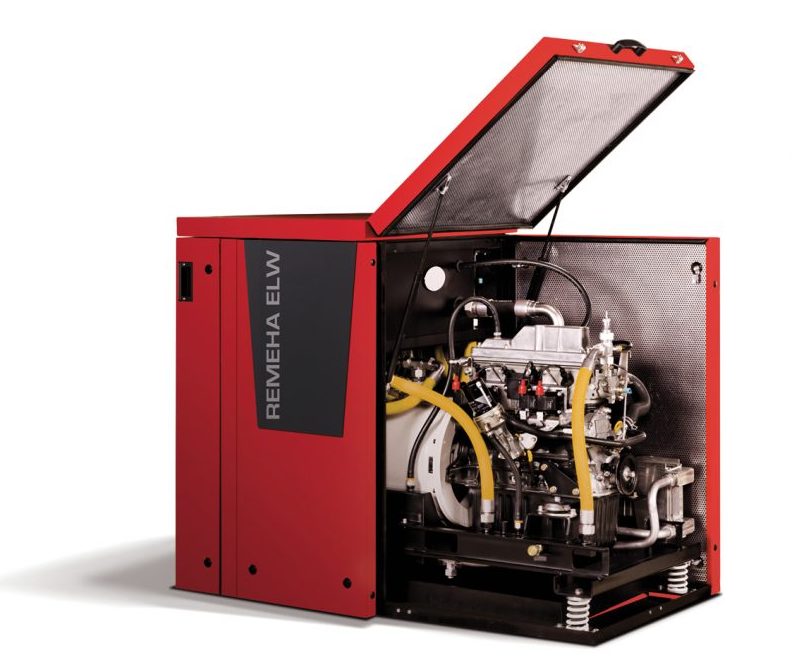 A 2015 report produced to meet the requirements of the EU Energy Efficiency Directive1 – the National Comprehensive Assessment of the Potential for Combined Heat and Power and District Heating and Cooling in the UK2 – concluded that to achieve the energy goals, significant investments needed to be made in new low-carbon technologies, renewable energy, energy efficiency and grid infrastructure. The report considered that there was technical opportunity in the UK for more than 390TWh per year of CHP to supply commercial, public and residential applications. It indicated that there was even greater potential benefit if the heat output from CHP were used in conjunction with heat pumps to increase the temperature.

The application of small-scale CHP effectively brings an efficient micro power station to a building or small estate that can provide electricity and heat locally to a site that is normally also connected to the electricity supply grid.

Small-scale CHP (such as that in Figure 1) saves primary energy, as the heat rejected by the cooling system of the CHP engine is being used on site (typically in the building’s heating or hot-water system) rather than, in the case of a centralised power station, being rejected to atmosphere, as in the example in Figure 2.

Additionally, the power distribution network suffers losses because of technical reasons (for example, cable resistance and transformers) and non-technical losses (including theft and mis-metering). UK grid electricity is distributed through licensed distribution network operators (DNOs), each being responsible for a regional distribution services area. The UK’s power networks aim to keep the overall grid distribution losses to a maximum of 6%.3 As indicated in Figure 3, the UK grid delivers electrical power to end users at an overall primary fuel efficiency of approximately 31%7 (this is an average value). The coal-fired power stations that feed the grid have thermal efficiencies at around 35%, and the combined-cycle gas turbine (CCGT) stations have near 50%.4 At times of peak electrical demand, there is increased use of the less efficient power sources so that the grid load can be satisfied, and the resulting specific primary energy cost – and associated carbon emissions – increase. Coal-fired stations accounted for 9% of electricity generation in 2016, down from around 23% the year before, and 21 April 2017 was the first day in the history of the grid5 that there were no coal-fired power stations feeding the grid, as gas and renewables (including nuclear) were able to meet demand.

The electrical operation of a small-scale CHP 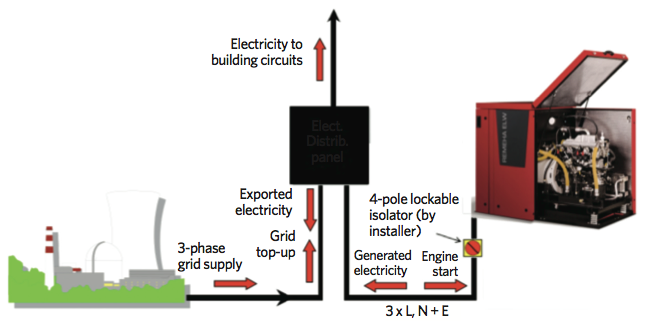 The recent report by the Association for Decentralised Energy (ADE), Lightening the Load6 examines the opportunities for CHP throughout the 2020s and 2030s. It notes that previous UK government electrical-generation carbon-emissions predictions indicated the carbon capture and storage technology (as part of centralised CCGT installations) would be mature technology in the 2030s. However, this expectation is no longer in place. The ADE report contends that although average grid emissions may fall, gas CHP will probably continue to reduce carbon emissions by up to 30% far into the 2030s, as long as there is other, less efficient centralised gas generation to displace. It suggests that the evidence is that the use of local gas CHP largely only displaces other gas power plants and rarely displaces either the lower carbon factor intermittent renewables or nuclear power stations.

For economic sizing, CHP units are typically applied as heat-led devices, so the thermal output should normally match the base heating load of the building, system or process to maximise the annual CHP running period. The traditional cost-effective CHP would operate 5,000 to 6,000 hours per year. The base electrical load should be carefully considered to minimise the electricity exported to the grid as, in the UK, there is currently little or no financial incentive in doing so. As a primary heat-producing device, CHP connects to a heating system just like a boiler. However, CHP would not normally be expected to meet the total heating requirement of a building, so it must be accompanied by boiler plant to meet at least peak heat demands. This can also offer opportunities for ‘smart’ operation of the CHP plant so that it could run at times when there is nationally high demand on the electricity grid. This can provide an environmental benefit and, potentially, increased financial benefits if a dynamic electricity tariffing system was in place. This could mean that, at times of ‘surplus’ grid electricity, the building’s alternative high-efficiency heat sources (such a thermal stores and condensing gas boilers) would meet the heating load while the CHP was switched off and the grid supplies the electricity (see the panel below for an outline of the electrical operation of a CHP unit). 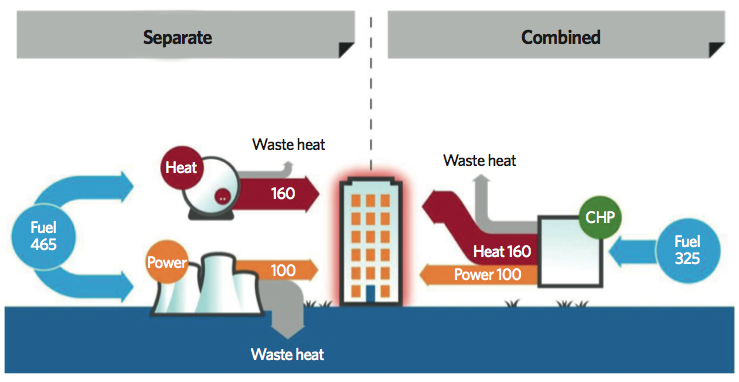 A thermal store – an example application is given in Figure 4 (taken from CIBSE AM12 Combined Heat and Power for Buildings) – is always recommended to provide thermal inertia, to smooth out the heat demand and extend the opportunity to use the CHP heat as opposed to employing boilers.

The use of the thermal store will maximise electricity production by keeping the CHP running in times of lower thermal load.

The heat from the CHP can also be used to preheat the cold water supply to direct-fired water heaters – another example of a thermal store. This is a solution that is used by many hotel groups.

Figure 4: CHP and boilers connected in parallel with a thermal store (Source: CIBSE AM12,8 page 42)

There are several drivers for installing CHP – such as financial savings and environmental benefits – but UK government policies are also encouraging the use of CHP to meet the relevant building regulations and local planning requirements. CHP qualifies as a carbon-reducing technology because, when installed and operated effectively, it can reduce carbon emissions as well as energy costs, compared with when using grid electricity and separate heating systems. To encourage the most beneficial application of CHP, the UK’s voluntary CHP Quality Assurance (CHPQA) programme9 certifies the CHP inputs and outputs as being able to deliver ‘Good Quality’ performance. CHPQA provides the certification to confirm eligibility for a range of UK government financial benefits. The CHP plant is evaluated on its fuel use, power generation and heat supply, and given a Quality Index (QI) and power-efficiency rating. UK building regulations make specific provisions for the appropriate inclusion of CHP. For example, in England and Wales, the Non-domestic Building Services Compliance Guide10 requires CHP plant in new and existing buildings to have a minimum annual CHPQA Quality Index (QI) of 105 and power efficiency greater than 20%. It also mandates that there should be a control system that, as a minimum, ensures the CHP unit operates as the lead heat generator and that metering is installed to measure hours run, electricity generated and fuel supplied to the CHP unit. It requires that the CHP plant should be sized to supply not less than 45% of the annual total heating demand (that is, space heating, domestic hot water heating and process heating). However, it does include the caveat that ‘unless there are overriding practical or economic constraints’ that could provide the opportunity for smart operation of the CHP installation together with high-efficiency boilers.

The National Comprehensive Assessment of the Potential for Combined Heat and Power and District Heating and Cooling in the UK provides an extensive account of the UK policies that support high-efficiency CHP. It notes that the fiscal and financial support mechanisms designed to improve the economics of developing and operating CHP plants require that the plants be certified, either fully or partly, as ‘Good Quality’ by CHPQA.

CHPQA certification may be used to support a claim for a range of benefits, including:

■ Exemption from business rates of power-generating plant and machinery.

CHP can deliver CO2 savings – but only if it is actually operating, and in an appropriate manner. An example of a real application of CHP in two hotels, as shown in Table 1, can illustrate the importance of correct CHP selection.

Both hotels are owned by the same company, and each has two CHP units rated at 5.5kWe, with an anticipated annual emissions saving of 30 tonnes CO2 for each hotel. However, in operation, the smaller hotel does not have enough hot-water demand to keep two CHPs operating, so the running hours, and the CO2 savings, are much less than expected. One CHP would probably have operated almost constantly and, therefore, would have delivered more CO2 savings than two units running part-time. Oversized CHP will never deliver as expected, so matching the CHP size to the magnitude and frequency of heat load is critical. 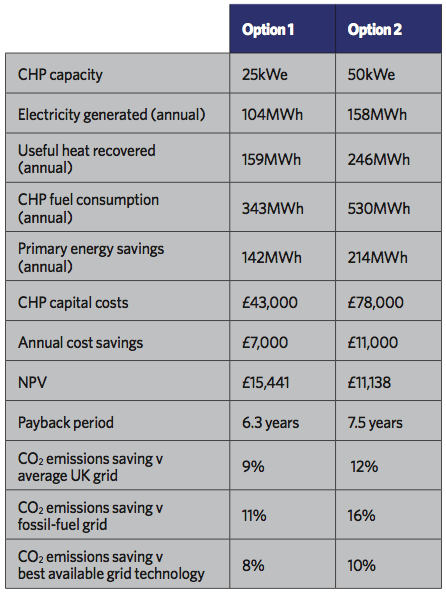 To establish an initial and indicative idea of the opportunity for effective CHP, the UK’s Department for Business, Energy and Industrial Strategy (BEIS) offers a CHP Site Assessment Tool (at http://chptools.decc.gov.uk/CHPAssessment). This uses net present value techniques to give an early idea of CHP viability. As an example, if a 5,000m2, 500-person, 1990s office in the Midlands is modelled in the tool, it provides a forecast for applying reciprocating engine CHP units – as shown in the abstracted information in Table 2. In this particular case, it indicates that both a single 25kWe CHP and a 50kWe CHP could provide economic solutions and would merit further investigation.

Most of the listed references provide useful, more detailed information on the assessment and application of CHP. CIBSE AM12 is freely downloadable for CIBSE members and provides a comprehensive source of knowledge and information.