Every building is equipped with low-voltage circuit breakers, or ‘breakers’. Their role is to control and protect the distribution of power at low voltage for essential services such as lighting, heating, air conditioning and power for IT systems.

Until recently, breakers have been straightforward ‘dumb’ switches, based on long-established technology. While there is nothing inherently wrong with these existing implementations, new developments in circuit-breaker technology are introducing the potential for energy saving, space saving, and better connectivity and control.

This article will consider the opportunities for new-generation circuit breakers in buildings, and how such technology can save space, reduce energy consumption and increase building ‘intelligence’. 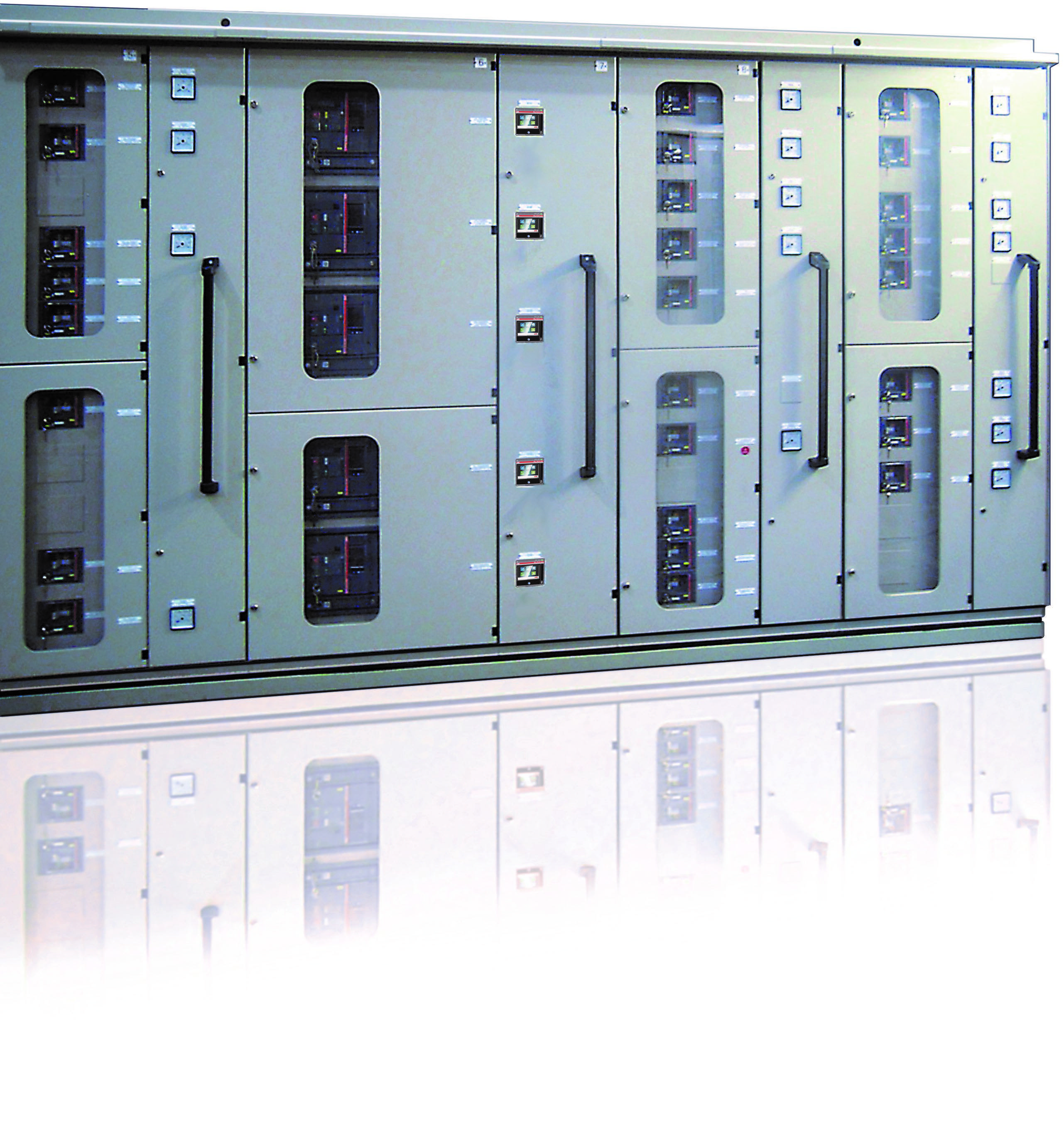 The Energy Performance of Buildings Directive (EPBD) requires that all new buildings should be ’nearly zero energy‘ after 31 December 2020 – net zero energy being different from zero carbon. A ‘nearly zero energy building’ (NZEB) means a building that has a very high energy performance, and the nearly zero or very low amount of energy required should be covered to a very significant extent by energy from renewable sources, including those produced on-site or nearby.1 Performance of NZEBs will be measured by energy consumption in kWh per square metre per year, with the proportion of renewable energy being expressed as a percentage of consumption.

While policy-makers encourage energy saving and energy efficiency, what is often more important to building owners and occupiers is that saving energy also reduces energy bills.

All the electrical power flowing to the loads in a building passes through the building’s breakers, which are located in a plantroom or an electrical cabinet (as shown in the example in Figure 1). More recent models incorporate higher levels of ‘intelligence’, logic and connectivity, increasing opportunities to save energy. They are also smaller in size and several can be stacked in a single panel, freeing up space to use for other services or as ‘lettable space’ for a building’s occupants. Equipment suppliers are competing to help building managers increase energy efficiency – and because all energy consumed by a building flows through its circuit breakers, they are a good starting point when looking for opportunities to save energy and costs.

The standard covers low-voltage switchgear and control gear assemblies – which describes a combination of low-voltage switching devices plus associated equipment for control, measurement and communication, along with mechanical and electrical interconnections and structural parts.

It applies to enclosures with rated voltage of less than 1,000 volts AC or 1,500 volts DC, and includes significant changes compared with its predecessor. New requirements have been added to ensure equipment performance when exposed to sunlight for long periods, or when operating in potentially corrosive atmospheres. Other new requirements cover confirmation of equipment fault ratings and mechanical performance.

The latest edition of IEC 61439 provides a more extensive explanation of equipment operational temperature rise, and makes clarifications, including the role of control panel, component and switchgear manufacturers. (See ‘Further reading’ at the end of this article for more on IEC 61439.)

As with most areas of commercial technology, ‘air’ circuit breakers – which use air to extinguish the arc when the contact is broken – are the subject of continuous and ongoing research and development.

Conventionally, circuit breakers have the role of switching loads and electrical generators on and off. They need to maintain reliability over a long life, so are based on tried and tested technology. To provide additional features – such as measurement, control and communication – operators have normally needed to install separate equipment.

While these breakers performed well for conventional commercial buildings, building managers are increasingly calling for electrical distribution systems that are suited to nearly zero energy and intelligent buildings. This requires greater levels of sophistication, as building managers are not simply minimising energy use, but also contributing to a building’s income through demand management or by selling excess renewable energy to the grid.

At the same time as the drive towards sustainability, there is a growing expectation for buildings to act intelligently, using building management systems to monitor and control essential functions, including HVAC, lighting, access and security systems.

Modern circuit breakers can support this with enhanced built-in communication and intelligent decision-making, and with enhanced control that does not require specialist programming skills – so enabling building operators to access more control over day-to-day operations.

Not only is the latest generation of switchgear smaller in size, but it is also possible to stack it in columns, so that multiple breakers can be housed in a single panel. This can improve the use of space in refurbishment projects where older breakers are replaced, at the end of their useful life, and the required plantroom space reduced. The plantrooms in new buildings will require less space than older projects with similar power requirements.

An example of the potential value is in a typical data centre for a financial services organisation. A data centre’s electrical infrastructure must be sized not only to support the critical load of the servers and computing equipment, plus auxiliary systems such as cooling, lighting and power conditioning, but also to leave the maximum usable footprint for the racks of servers. Modern circuit breakers allow switchboards to be built as much as 25% smaller than conventional switchboards. A data centre in Israel has recently been fitted with 130 modern-generation breakers, ultimately saving 15m2 of footprint when compared with previous technology. For a typical data centre operator, 15m2 of floor space is equivalent to six additional server rack enclosures, with a total data storage capacity of 1,584 terabytes (TB).

The ability accurately to measure and communicate is now built into devices, removing the need for additional instrumentation and wiring. Typically, modern circuit breakers can integrate measurement to a tolerance of 1% of the actual value of current, 0.5% of voltage and 2% of power and energies, and measurements can often be read directly on the unit’s display, so reducing the need for extra devices.

As well as the more straightforward measures, the new generation of circuit breakers can act as a network analyser to monitor power quality. They can be set up to monitor average voltage, short voltage interruptions and spikes, slow-voltage sags and swells, voltage unbalance and harmonics.

Continuously monitoring the state of the electrical systems can enable the protection of sensitive electronic equipment and, from interrogation of alarms, events and measurements, operators can prevent system faults, or disconnect effectively as necessary.

The intelligence in modern circuit breakers has the potential to assist in reducing peak loads. For example, during a hot summer day, all air conditioning systems might start working at the same time, leading to a peak in consumption and potential challenges with the energy supply. This can also affect the building’s peak electrical load, so incurring costs and potentially needing more investment in electrical plant.

The latest circuit breakers integrate power controller functionality. This manages the power flowing through the breaker and keeps it below a limit set by the operator, by disconnecting non-priority loads. It can also be linked to bring backup power generators online. One manufacturer’s experience has shown that load shedding can reduce peak power consumption by up to 15% and is usually invisible to building occupants who, for example, may not notice that air conditioning, heating or electric car charging stations have been switched off for a short period. A prioritised list of building loads and constant power monitoring can manage loads automatically with no need for additional control systems or bespoke software.

It is thought that replacing existing traditional breakers globally with the latest technology has the potential to achieve annual energy savings of 5.8m megawatt-hours (MWh) – equivalent to the typical annual electricity consumption of 1.4m European households, and consequent emission of 4m tonnes of CO2 per year. 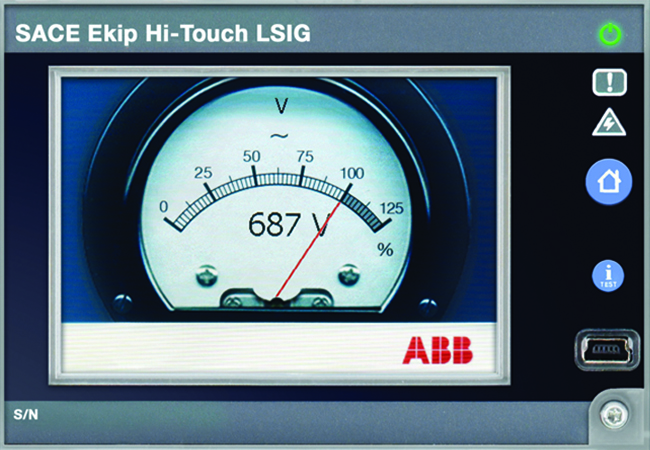 As well as direct control using the front panel – potentially using touchscreen navigation (as in the example shown in Figure 2) – control is also available through specialist apps for smartphones, tablets, PCs and so on,  as well as through general web interfaces. This can provide swift access that can be particularly beneficial when there is a fault or an emergency. Smart circuit breakers can integrate with smart grid-electricity distribution systems by, for example, participating in demand-management schemes, or by exporting power to the grid when it is most beneficial to do so. The newer breakers have compatibility with the most common communications protocols, such as Modbus, Profibus, Devicenet, Modbus TCP, Profinet, BACNet and Ethernet IP, as well as the IEC 618503 smart grid communications protocol. This means that breakers are simple to integrate into smart buildings through, for example, supervisory control and data acquisition (SCADA) systems. Using industry-standard protocols means they will have a better chance of being compatible with both existing and future infrastructure.

The enhanced communication and intelligence in modern breakers can inform predictive maintenance, too, with the circuit breaker signalling when it is in need of routine maintenance. This can help avoid incidents or shutdowns and extend the life of equipment.

It is possible to have centralised control of new-generation low-voltage switchboards, either from the front panel or remotely – through local networks or web connectivity. By connecting circuit breakers together with standard ethernet components (cables and network switches), a collection of breakers can be linked, with no need for a separate – and potentially costly – supervision system.

Backup power generators are vulnerable to damage from internal faults or surges arising from the electrical system to which they are connected. The protection required depends on the type of plant and application, which makes standardisation of protection systems and applications difficult. This has meant that operators rely on sophisticated electrical protection systems, which can be complex to calibrate and control. In the past, generators required installation of multiple relays tailored to each installation. However, today’s circuit breakers can be equipped with trip units that contain the functionality needed to protect generators and monitor their critical parameters. By programming the protection unit with the relevant protection against over- or under-voltages, over- or under-frequency, overloading, earth faults and other issues, these circuit breakers can deliver reliable generator protection, whether the generator is paralleled with the network or working in isolation. 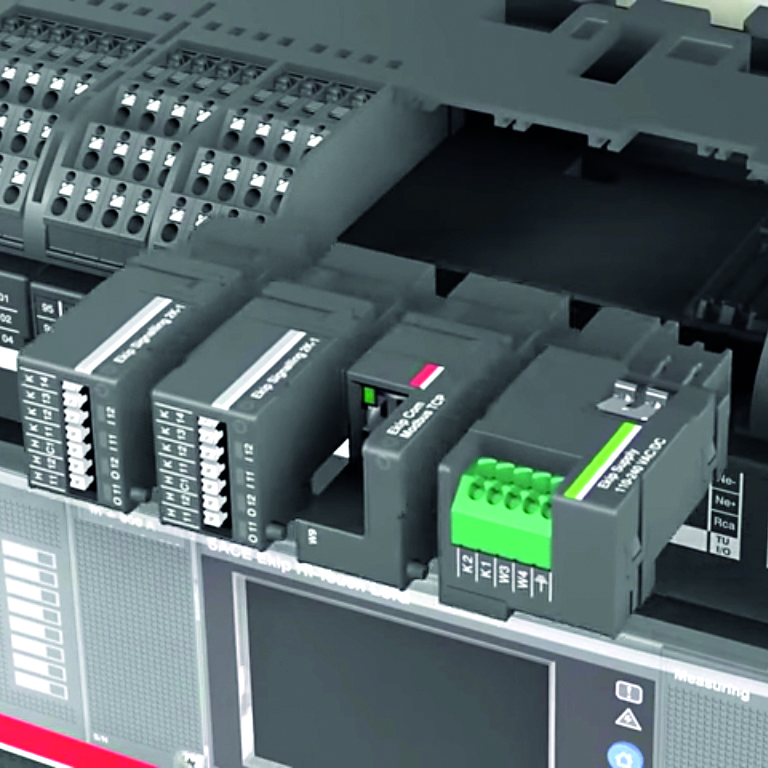 Figure 3: This modular mounting method allows safe and reliable connection, as well as the maintenance of communication even while in the ‘racked out’ position (Source: ABB)

New-generation breakers have been designed to enable safe, simple and robust mechanical installation. For example, the configuration of the circuit breaker’s terminals can be readily site-altered to fit different busbar configurations, providing simple and safe installation of the wiring and accessories without specialist tooling. Typically, such systems incorporate a wide range of options for communications and the ability to add functionality simply so that installers/operators may make changes to the installation, even at a later project stage.

Circuit breakers (such as the example shown in Figure 3) should be constructed to allow simple and safe maintenance. For example, this can be done by including dedicated guide rails for withdrawable circuit-breaker components to simplify movement and allow correct, locked and clearly identifiable positioning. Mechanical interlocking and shielding is used to ensure safe maintenance. Circuit-breaker units should include lockable shutters that protect operators by preventing access to live parts during maintenance, and it should be possible to install accessories without
having to access compartments that contain live components.

Our thanks to ABB for providing core information and images for this article.

The changes to the requirements introduced in IEC 61439 are covered in more detail in Introduction to IEC 61439, available online at http://bit.ly/1OsjJU9.