There can be strong financial and environmental reasons to consider the application of solar thermal hot water heating in commercial applications. In the UK, the commercial Renewable Heat Incentive (RHI) payments provide around 10p per kWh of useful solar thermal heat generated to heat domestic hot water (DHW), in addition to the
benefit of the ‘no-cost’ hot water itself.

The RHI is designed to provide a return on investment (ROI), so that properly applied technology is economically viable. It is particularly beneficial in applications where solar thermal is displacing oil or electric heating, and can give very attractive payback periods. Environmental assessment methods (such as BREEAM and LEED) recognise the contribution of applying renewable technologies either directly or by considering the low emission levels from the building heating systems. To ensure year round supply, solar thermal systems may be designed to work alongside – and in conjunction with – the majority of traditional hot water heating systems.

Solar irradiance will vary throughout a day (and, of course, across the seasons) and depend on the weather – it may range from tens of watts per square metre up to several hundred watts in the middle of a summer day, depending on the cloud cover. But even in northern European locations, there is sufficient solar energy to provide useful hot water – typically meeting 30 to 40% of annual requirements in a commercial building application.

To determine the most appropriate size of solar thermal system requires knowledge of the daily hot water consumption. Typically, this will relate to the type of installation, and can be evaluated using actual historic hot water usage data or tabulated data such as that shown in Table 1. However, some caution should be used with such generalised data, as it may be misleading – for example, a (limited) study1 in the US showed that in two monitored hotels, 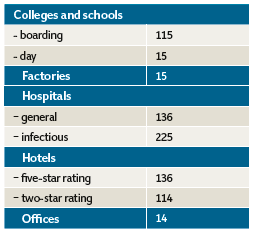 there was no relationship between the number of guests and hot water consumption.

Since the timing of hot water load is unlikely to match the availability of the solar resource, a storage (buffer) tank is used to store the heat for subsequent use by the DHW system. In northern Europe, the principal systems used to collect and store the heat either employ a sealed system (as shown in Figure 1) or, alternatively, when using flat-plate collectors, a ‘drain-back’ atmospheric pressure system (Figure 2).

The two main commercial methods of capturing the solar energy – flat-plate collectors (Figure 3) and evacuated tubes (Figure 4) have been described in a previous CPD article – see www.cibsejournal.com/cpd/2009-02/. (For an interesting real-time comparison of an example domestic installation of the two solar collector types, see http://bit.ly/comparecollectors).

The performance of the collectors will be determined by their type and position. Both the orientation and the tilt of the receiving panel will impact the availability of solar radiation. The optimum is related to the site latitude – in the UK this means that simple flat-plate collectors should be south facing, with an angle of inclination of between 30° to 45°.

Both closed and open (atmospheric) systems employ a pump and controllers to optimise the amount of useful collected solar energy. Once the heat has been captured, it is commonly used as part of a combined solar store and DHW store (as in Figure 3) or – increasingly commonly – to preheat the water supply for a separate dedicated DHW storage tank or continuous-flow (gas-fired) hot water system.

Although the drain-back system – which allows water to drain from the solar collectors when there is no demand for the heat or there is a risk of freezing – is simpler in concept, and requires fewer components, it is the closed system that is more often used, as it is more forgiving of variances in installation and more responsive to changes in demand. Drain-back systems would normally use water as the heat transfer fluid, whereas sealed systems use a glycol mixture, since the fluid will be subject to sub-zero temperatures in the collectors and pipework. The use of a glycol solution is a compromise, as it is acidic and has a lower heat transfer coefficient (by about 15%) compared with water, and is subject to significant degradation as temperatures rise towards those that can occur at times of ‘stagnation’.

To avoid pressure damage in a closed circuit, an expansion vessel is used to accommodate the expanding liquid (as well as the displacement caused by boiling liquid). Since this is a sealed system, a pressure relief device is also included – this will reject valuable system fluid to drain away, and should only be for emergency use.

Pipework, components (including the expansion vessel) and connections rising to the collectors (the ‘solar loop’) must be installed with methods that can withstand the stagnation temperature.

There are systems – particularly those employing evacuated tube collectors – that prevent heat flowing into the solar loop when it is at risk of stagnation conditions. Alternatively, loops using convection heat exchangers may be used to reject the heat to the outside air at times of low DHW load. These systems can respond quickly to changing demands without evacuating the collectors, as well as limiting the risk of excessive temperatures that will otherwise reduce the life of system components. 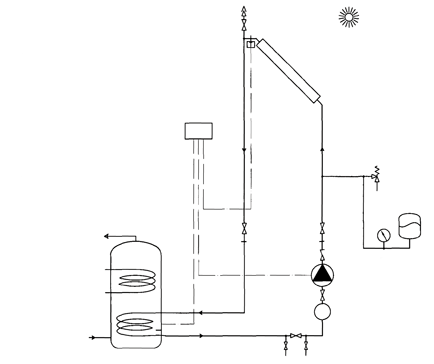 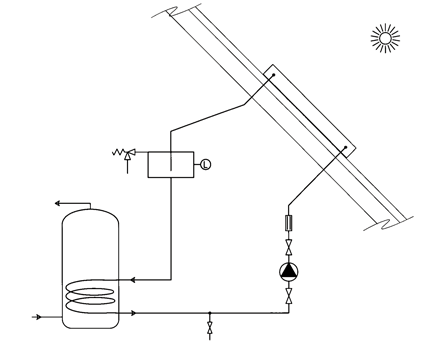 The five phases of stagnation

1– Collector temperatures rise until evaporation process begins somewhere in the upper part of the collector array. Increase in system pressure is small.

2– Liquid is pushed into expansion vessel by steam from collector. System pressure rises rapidly, as does the boiling point in the pipe sections filled with saturated steam. Liquid almost at boiling temperature puts a high temperature stress on system components. This phase lasts for only a few minutes and ends when there is a continuous path for steam from the collector inlet to the outlet. Residual liquid remains in the collector.

3– Liquid left in collector evaporates passing energy to other system components by condensing steam at the local boiling temperature. With system pressures of around 1.5 to 3.5 bar, boiling temperatures are circa 130°C to 155°C. Energy transported out of the collector is released to components (and the environment) from condensing steam. At the end of phase three, the steam volume and the system pressure reach maximum values.

4– Superheated steam in collector decreases the effectiveness of heat transfer so steam volume reduces, drawing liquid back until the lower connection of the collector, even though solar irradiation continues. This cycle ends when solar energy reduces. On collectors with the top fill connections, slow sawtooth- like pressure fluctuations can occur.

Whichever type of system is used, there is a balance required between the daily hot water demand, the area of the solar collectors (the ‘absorber’ area) and the solar store (and its associated heat transfer coil). The term ‘solar fraction’ (SF) is used to describe the proportion of hot water that can usefully be produced by the solar thermal system. Typically, this will be quoted as an annual figure and installations will vary from approximately 30% (in colder climes) to 60% (in southern Europe).

To evaluate an appropriate balance of component size, the collector performance coefficients that account for the gains and losses from collectors, as defined by EN ISO 9806 (or its predecessor EN12975-2 Thermal Solar Systems and Components), are used with a dynamic thermal model or an application of software, such as the free RETScreen3, the more basic Tecsol4, or commercial packages such as TSol.

For example, consider a small two-star hotel application in Stornoway (latitude 58°) with a year round occupancy of 40 guests. Modelled using a tool such as Tecsol, this allows a swift sensitivity analysis on the effect of altering the number of collectors and the size of the solar store. This example will use 2.37m2 flat-plate collectors (such as Baxi Sol 250 of Figure 3) facing due south with an inclination of 35°. The data produced from this simple exercise (shown in Figure 5) appears to support the ‘rule of thumb’ that 50 litres of thermal store per metre 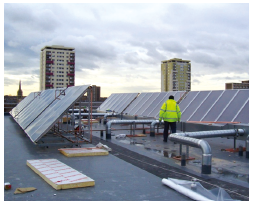 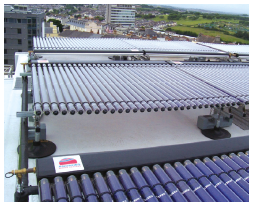 squared of flat-plate absorber appears to be a reasonable maximum size. (Where the solar store is combined with the DHW store, this volume may well be larger.) It also indicates that there is clearly a diminishing benefit as more collectors are added. Also, as the number of collectors increase, there is a greater opportunity for stagnation in the summer months.

The contribution to the heating of the DHW (the solar fraction (SF)) will vary throughout the year, as shown in Figure 6. Although there may appear to be an opportunity to increase the winter SF by adding more collectors, this will likely lead to stagnation in summer and, of course, increase the time to deliver financial and environmental payback. 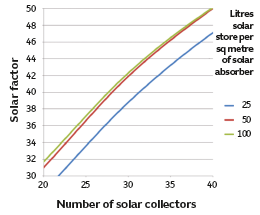 Figure 5: Illustration of the impact of the number of collectors and the volume of solar storage on the solar factor for the example hotel in Stornoway (based on simple analysis using Tecsol)

For a fundamental understanding of the thermal performance and application of solar systems, see the seminal book by Duffie and Beckman, Solar Engineering of Thermal Processes.