This month’s article features a further improvement to the performance of air cooled chillers in the form of evaporatively cooling the fresh air intake to the condensers. The theory of evaporative cooling will be presented, together with the improved performance data and an application into modular data centre air conditioning packages.

This follows on from the CPD article in the July 2009 Journal, which introduced several innovative improvements to the performance of centrifugal compressor water chillers. These included:

Evaporative cooling is achieved with a cassette made from inorganic, non-combustible packing material, which is a resin coated board – one that is fireproof and will not support bacterial growth. Figure 1 shows the typical air cooled chiller arrangement. The cassettes are set in front of the V bank epoxy coated condenser coils and can be slid out for replacement or winter operation to reduce fan pressure drop. 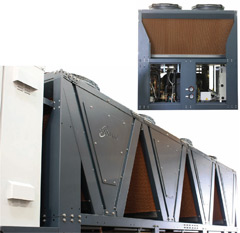 The system incorporates a once-through water system with micro jet spray nozzles, which means that only the minimum amount of water is used with the water being pumped by a variable speed drive pump, through a UV filter to kill all bacteria.

The sprayed water flows onto the corrugated surface of the cassette material and saturates the material, but without passing through and coming into contact with the condenser coils.

As the warm, dry ambient air passes through the cassette it evaporates a proportion of the water, lowering the air dry bulb temperature and raising the humidity. The fans are variable speed drive with electronically controlled motors to reduce energy usage. Approach temperatures between refrigerant condensing temperature and air onto the coils are reduced by up to 8K at peak design conditions (35oC ambient). Condensing temperatures are reduced and condenser fan volumes also lowered, so energy savings can be very significant. Utilising the flow/power cube law, savings of up to 30% are possible.

The evaporative unit can be automatically switched off at lower ambient conditions, when water cost equals or is greater than potential energy savings. Excess water assists in washing the media, and is drained back from the cassettes. It also allows the use of water straight from the tap with no need for water treatment (i.e. demineralisation plants). Minerals and pollutants stay behind in the cassette material to be washed away with the discharge water, keeping the total humidification process pure. 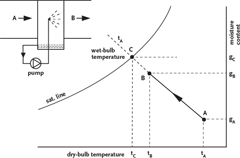 The theory of evaporative cooling

Figure 2[1] shows air passing through a water spray chamber, which could also be the corrugated packing medium saturated and sprayed from the micro jet nozzles in our application. Text books refer to air passing over or through a wetted surface.

This process results in heat and mass transfer and can be represented by the ‘straight line law’. This law states that when air is transferring heat and mass (water) to or from a wetted surface, the condition of the air at point A, shown on the psychrometric chart, drives towards the saturation line at the temperature of the wetted surface. The condition of the air leaving the spray chamber or wetted surface at point B has dropped in dry bulb temperature and increased in humidity or moisture content. The straight line law states that point B lies on a straight line drawn between point A and the saturation curve at the wetted surface temperature at point C. The warm air at point A dry bulb temperature drops when in contact with the water at temperature tC. This application of heat and mass transfer is one of the most complex encountered in heat exchange theory, but this article will consider the underlying application of the basic principles. Further reading on this is given at the end of the article.

The process that is taking place is known as adiabatic saturation and as such occurs without any external exchange of heat into or out of the system. Air at the start of the process is at a dry bulb temperature tA and moisture content gA and as it passes through the saturated cassette, water is evaporated from the surface of the cassette material so that the air leaving the cassette and entering the condenser coil, in our case, has a dry bulb temperature tB and moisture content gB. For water to evaporate, heat must be supplied and, in an adiabatic process, this heat can only come from the air itself. The latent heat of evaporation gained by the air must equal the sensible heat loss by the air, which means there will be a drop in air dry bulb temperature to compensate for the increase in moisture content:

The theoretical process line follows the adiabatic saturation temperature (which may be assumed to follow the wet bulb temperature lines that are printed on the psychrometric chart). But a close approximation, which usually assists psychrometric calculations, is to consider the process as a constant enthalpy one.

The main factors that affect the performance of the cassette in reducing the ambient dry bulb temperature entering the condenser coil are:

In reality the efficiency, or contact factor will be 85% to 90% so the dry bulb temperature of the air leaving the cassette will practically ‘approach’ but not get as low as the wet bulb temperature. 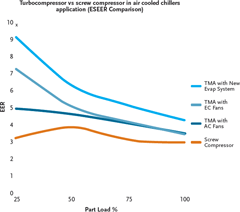 The air cooled chiller section can include the evaporative cooling cassettes for improved performance. Conditioned air is ducted from the air handling unit section to discharge under-floor in the data centre sections and ducted from high level back to the air handling unit/fresh air intake. Further enhancements to the air handling package include an adiabatic heat exchange unit in the return air section, with sensible heat transfer to the fresh air supply providing initially free cooling from the outside ambient, then adiabatic cooling, then liquid pressure amplification(LPA) free cooling and finally mechanical cooling from the centrifugal compressor. 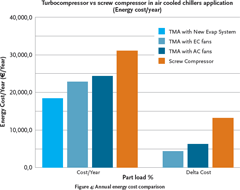