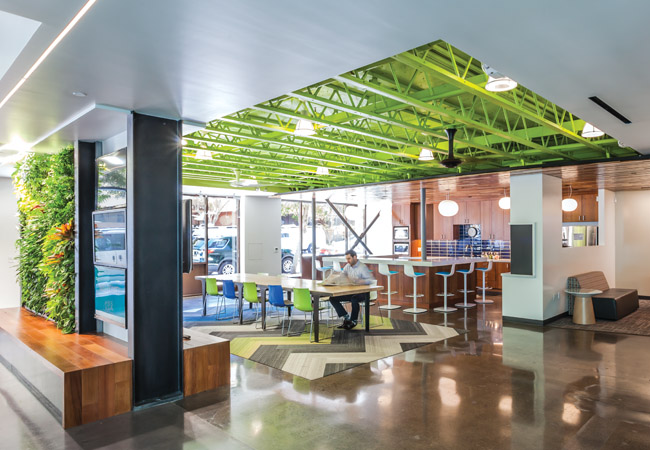 The building it selected to house its 90-strong workforce was a 50-year-old, 1,900m2, two-storey, industrial-style building, boxed in on its north, west and south elevations by adjacent buildings, and topped by a gently arched roof. Where some might have seen a tired building beyond salvage, DPR saw a project with the potential to become a pillar of sustainability. 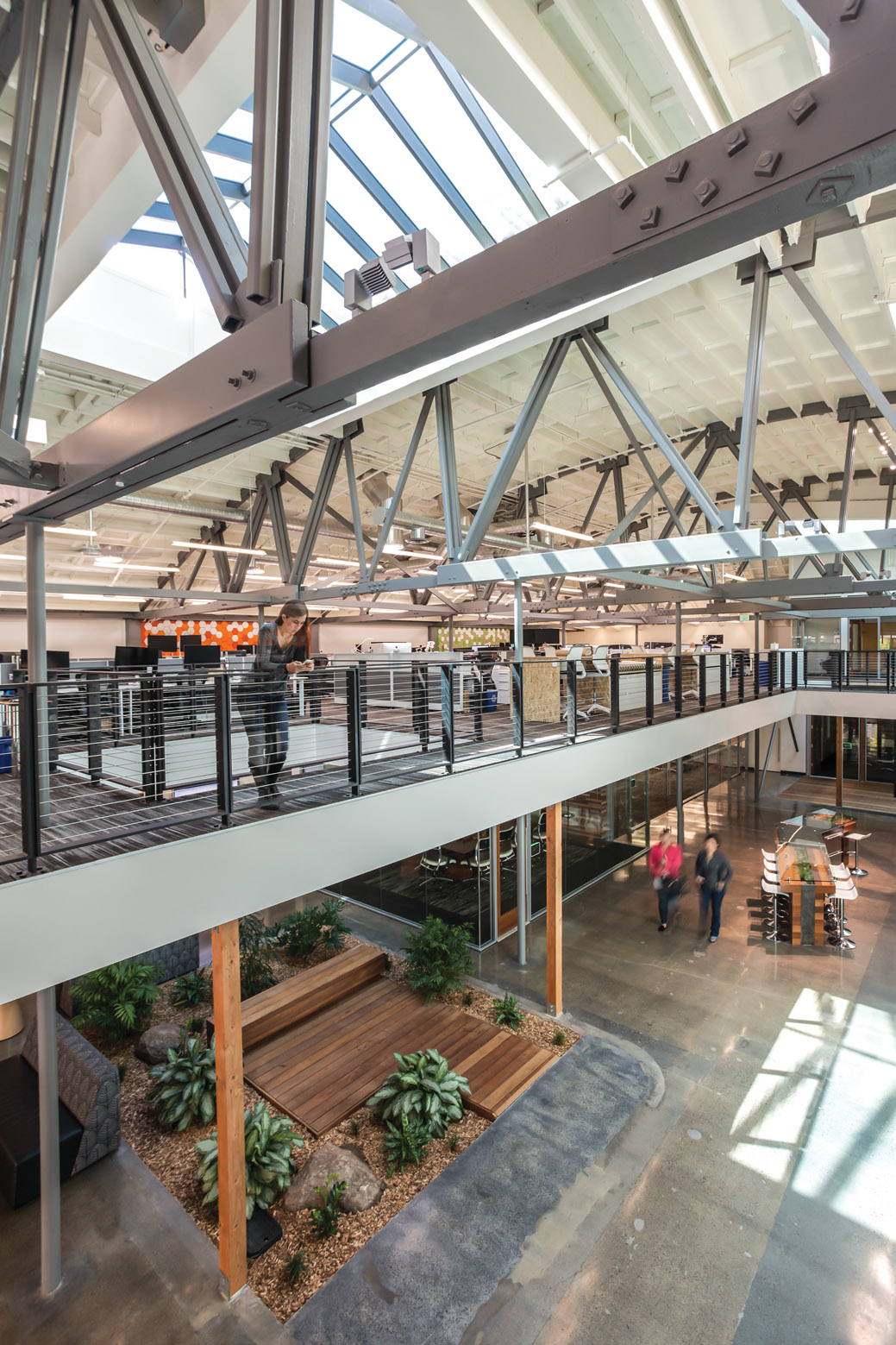 In addition to offices, the scheme was to include conference rooms, breakout areas, a kitchen and a fitness centre, to help promote health and wellbeing. However, despite DPR Construction’s overarching requirement for the retrofitted building to produce more energy than it consumed over the course of a year, the contractor did not want to pay a premium for this.

To add to the task facing building services engineer Elementa Consulting, Member of Integral Group, and FME Architecture, the contractor wanted the scheme to be designed, built and ready for occupation within 10 months, when the lease on its current premises was due to expire. Benjamin Galuza, principal at Elementa Consulting, said: ‘The challenge set by the client was to design, build and have operational a net-positive energy office within a 10-month period, at no additional cost compared to a market-rate building. It was not an aspiration, but a project requirement.’

The starting point in developing a retrofit solution capable of satisfying the brief was a series of early collaborative workshops. In these, the team of architects, building services engineers and quantity surveyors were helped in the design development by the client, who – perhaps unsurprisingly – was main contractor for the build.

A total project cost of approximately £1,866 per m2 was allowed for the scheme. ‘This is comparable to what others in the region are paying, although the proposed photovoltaic (PV) installation expense meant we had to find ways to shave costs in other areas, through creative and integrated design solutions, to meet the budget,’ says Galuza. ‘Each design element has to serve at least two or three functions that provide value.’

‘The building’s location – surrounded by buildings on three sides and with a major thoroughfare on the fourth – prevented the use of typical passive design strategies, such as natural ventilation and 100% daylight autonomy,’ he adds. Instead, the focus was on creating a high-performance building envelope – tight and highly insulated – to enable a simple, off-the-shelf building services solution to be developed.

To speed up design development, Elementa used what Galuza calls ‘whole-building spreadsheet energy models’, to get rapid, simple payback information for energy-use assessments. The lease was only seven years, so paybacks had to be within this term.

As an example, the tools enabled the team quickly to assess the optimum thickness of fabric insulation to be added. ‘Because we were in a design-and-build situation, we asked how much the installed cost would be for 75mm, 100mm and 150mm of roof insulation,’ says Galuza. ‘We were then able to assess the cost benefit in real time, so we could make decisions pretty quickly to meet the programme.’

The outcome of the modelling is a roof with 100mm of insulation added externally. The design also included the addition of two large roof lights, to bring daylight into the heart of the building, so reducing the lighting load. 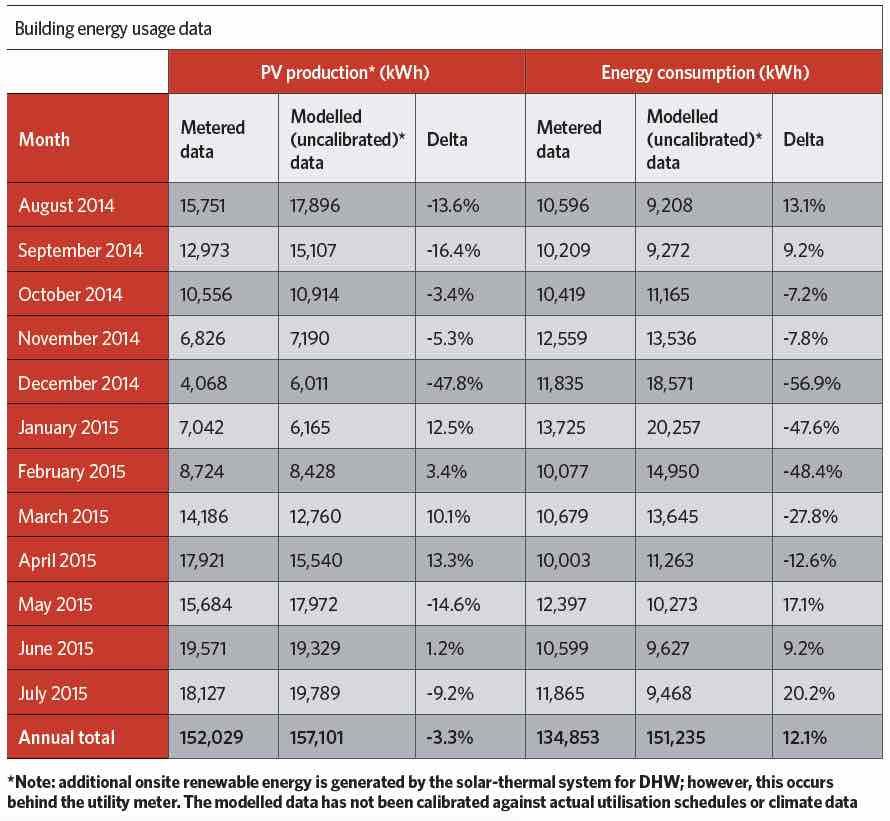 The roof lights are fitted with electrochromic glazing to limit uncontrolled solar gains, and a light sensor on the roof adjusts the tint of the glass based on outdoor light levels.

‘On foggy San Francisco days, the skylights provide high-quality diffuse light, with the dynamic glazing giving a solar heat gain coefficient (SHGC) of 0.41,’ says Galuza. ‘On sunny days, the skylights automatically adjust down to an SHGC of 0.09, to help maintain indoor thermal and visual comfort.’

The team was fortunate in that the modifications to the existing roof were incorporated into works to upgrade its structural performance after revisions to the Californian seismic codes.

Inside the building’s insulated envelope, development of the building services design was helped by DPR Construction’s requirement to target net-positive energy certification through the International Living Future Institute. ‘Net-positive certification means that onsite combustion is not permitted, so we had to design the services to be 100% electric,’ says Galuza.

Photovoltaics are the primary source of energy. The new roof lights and other openings meant about 60% of the roof area was available to house the PV installation. This will produce 118kWp of electricity. An energy use intensity (EUI) target of 74.3 kWh·m-2 per year was set for the building as the maximum that could be offset by the PV installation.

‘For a net-positive energy building, you cannot use more energy than you can generate,’ says Galuza. ‘You know how much energy the PVs will produce over a year, so you have to work back from that point – this becomes your annual energy budget. Most people do the same thing with their household budgets; you can’t spend more than you make without going into debt.’

The scheme also includes a couple of solar-thermal panels. Low-flow fixtures help reduce hot-water demand, enabling the solar-thermal system to meet the building’s entire hot-water load for much of the year – saving 3,400kWh per year of energy, and ensuring a five-year return on investment. For times of high demand or low sun, the system includes a direct electric heating backup. 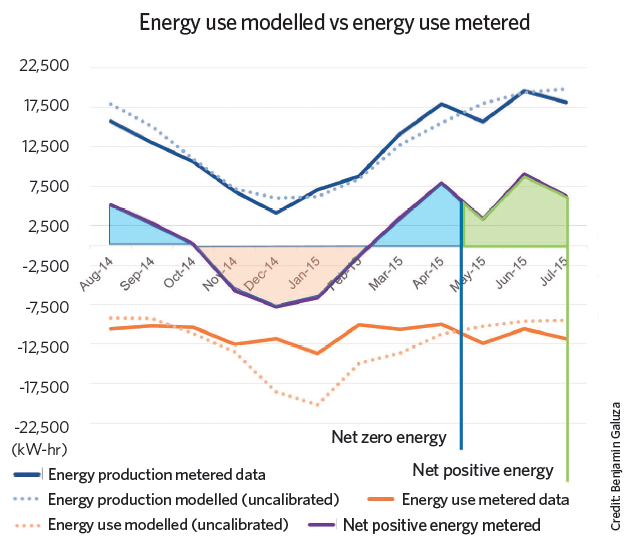 The requirement for the building to be 100% electric meant there was no need to replace the gas-fired boiler. Instead, Elementa specified an all-electric variable refrigerant flow (VRF) system both to heat and cool the office. Refrigerant is piped from rooftop condensing units to fan coil units serving the various spaces.

‘The beauty of the system is that it enables heat to be transferred from spaces requiring cooling to spaces that require heating, and vice versa,’ says Galuza. ‘For example, heat can be moved from the core of the building to its perimeter without having to engage the compressors. The system contributed to a 37% reduction in HVAC energy consumption.’

Fresh air is ducted to mixing boxes mounted at the rear of the VRF fan coil units. Occupant comfort is assured by the fresh-air system supplying 30% more air than the minimum local code requirement.

Carbon dioxide sensors – located in densely occupied areas of the office – regulate the volume of air supplied by dedicated outdoor air-handling units. These are fitted with air-to-air plate heat exchangers, complete with bypass damper, to enable heating or cooling energy to transfer from exhaust air, to temper the supply. ‘The system is designed to take advantage of the Bay Area’s mild climate by using free cooling through air-side economising for most of the year – which is not too dissimilar to southern England,’ says Galuza. 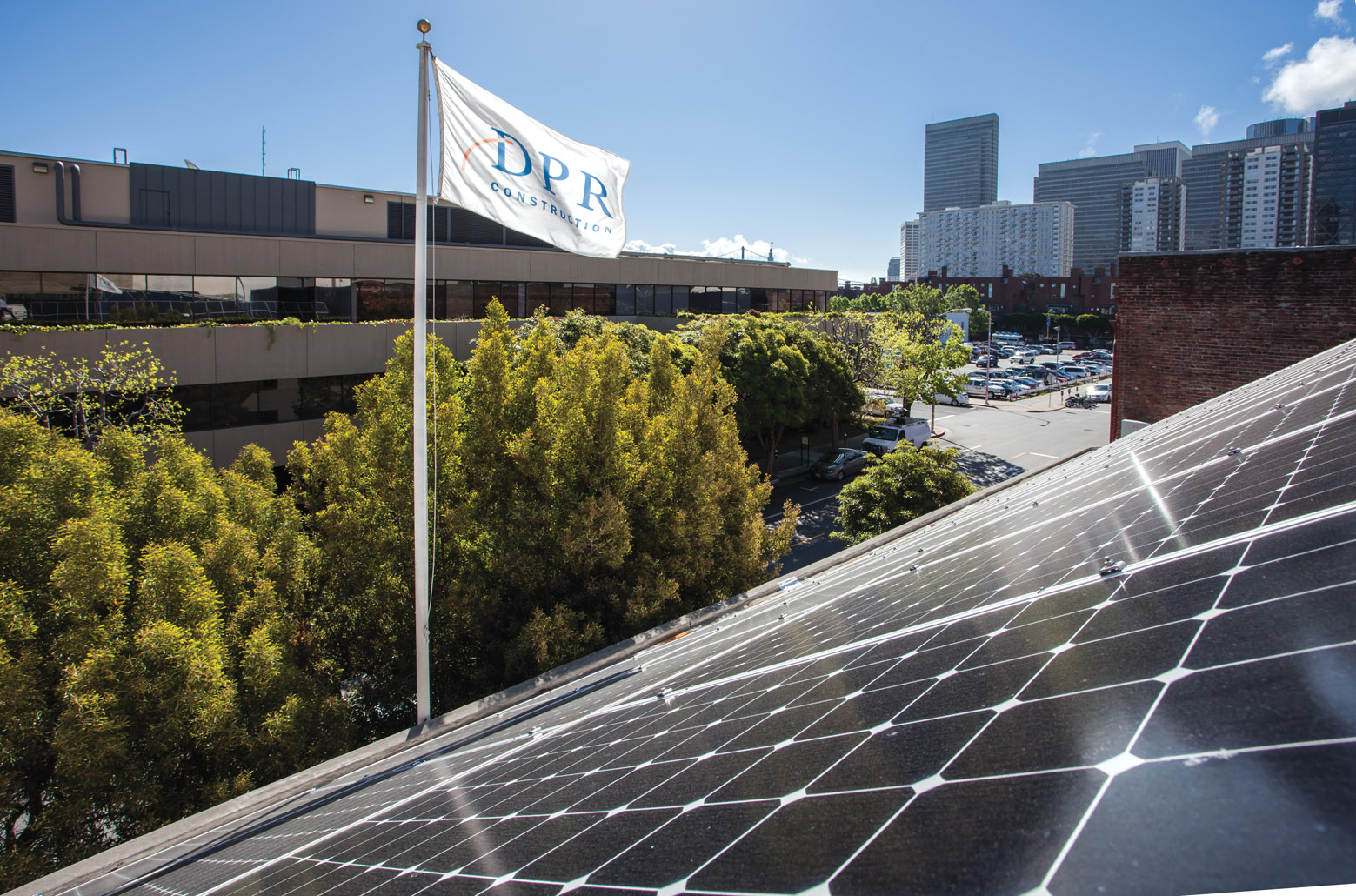 To further decrease energy use, the indoor air temperature is allowed to rise slightly in the open office and lobby areas, with thermal comfort maintained by large, 8ft-diameter, Big Ass ceiling fans. These are used to increase air speeds and to limit stratification, and are controlled through the building management system.

As indoor temperatures change, the fan speed is varied accordingly, to ensure comfortable conditions are maintained.

The indoor air quality is enhanced further by the inclusion of three walls of living moss, which help remove volatile organic compounds (VOCs) from the air, while giving people a connection to nature.

Office lighting is LED to keep electricity demand to a minimum. The lack of perimeter windows means most daylight enters the building through the two skylights, an existing atrium and reflective light tubes in some of the office areas. LED light levels are controlled through a combination of daylight-level and occupancy sensors.

In preparation for the office move, DPR Construction carried out a detailed study of all plug-and-process equipment loads, to identify items that consumed large amounts of electricity and determine which would make the move and which would be replaced.

Elementa’s electrical design includes smart-plug strips that turn off all non-essential equipment, such as computer monitors. There is also what Galuza calls ‘a building plug-load kill switch’, which is designed to be activated by the last person to leave the building. The small-power system includes 42 circuit transducer (CT) meter points so energy use can be tracked and dissected. To keep the occupants abreast of the ongoing building performance across all major environmental indicators – including energy, water, transportation, indoor environmental quality and waste – the walls of the building’s lobby are adorned with an LEED Dynamic Plaque and an energy dashboard.

The building opened on time and on budget in June 2014, and Elementa stayed for a two-year post-occupancy commissioning period, to ensure the building met its energy targets.

Initially, the building was not tracking towards its energy goals; however, by adjusting equipment schedules, modifying set points and recommissioning the lighting controls, the building’s energy consumption decreased. Cleaning the solar panels more regularly also ensured maximum output from the PVs.

DPR Construction succeeded in its aim to develop a simple, cost-effective solution to meet its net-positive energy target for the building, while remaining within the total project budget of £1,866 per m2; this, Galuza says, was ‘below typical “market rate” for refurbishment projects in San Francisco at the time’. The project’s mechanical cost – at £174 per m2 – compares very favourably with the US average of £191 per m2 for office buildings, and with those in the Bay Area, where total HVAC costs can be in the region of £249 per m2 to £332 per m2.

The building’s low-energy design has been so successful that it is being used increasingly to host industry events and open houses. Ironically, these have proved so popular that those coming to see the net-positive energy building in operation are causing an increase in its energy consumption.

This amount of after-hours activity was not part of the original energy strategy, but Galuza says that ‘ongoing monitoring and energy management has ensured the scheme has remained net-positive’.

A study by Ecological Building Network and StopWaste.org found that – with the PV system – the building operates at an emissions rate of 5.3 tonnes CO2e per year. 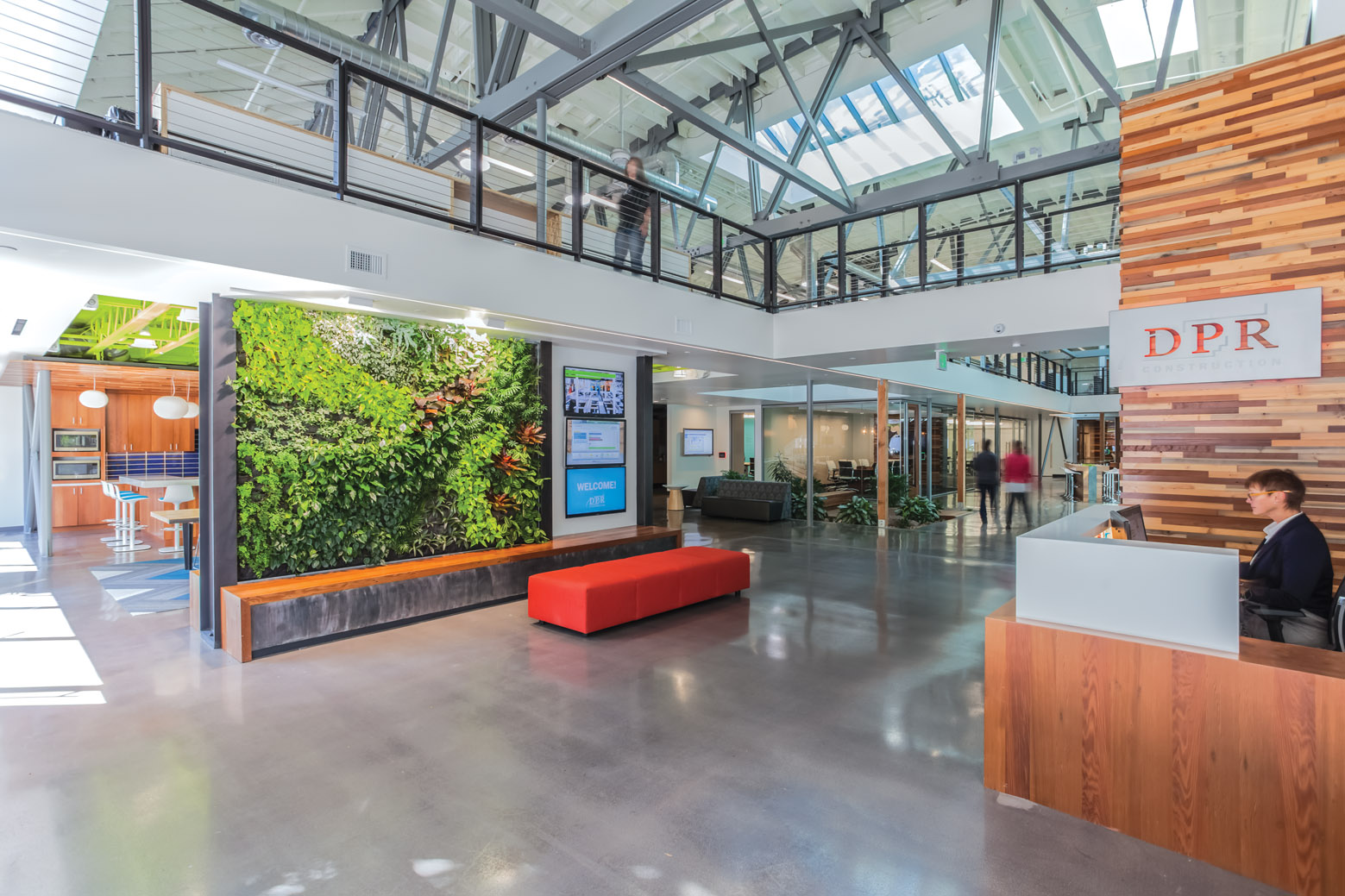 This figure does not include the carbon savings – realised before DPR moved into the building – which came from the reduced embodied carbon emissions from reusing an existing building.

Embodied carbon was determined to be one-third of what it would have been for an equivalent new-build. Over a 30-year life-cycle, emissions from the same-sized, traditional office building would be 71 tonnes CO2e per year, while a new code-compliant building in California would generate about 45 tonnes CO2e per year.

The business case and value of a net-positive energy building retrofit came from DPR Construction. The ‘value add’, says Galuza, is ‘an increase in occupant and employee satisfaction, and the marketing value the building provides by reinforcing DPR Construction’s position as a leader in sustainable construction’.

In 2016, a building-user satisfaction survey of the occupants was conducted by the University of California (UC) Berkeley Center for the Built Environment. It found an exceptional occupant satisfaction rate of 94%, which is significantly higher than the 73% figure of a typical benchmark building.

The scheme certainly satisfied the judges of this year’s CIBSE Building Performance Awards, where it won International Project of the Year.