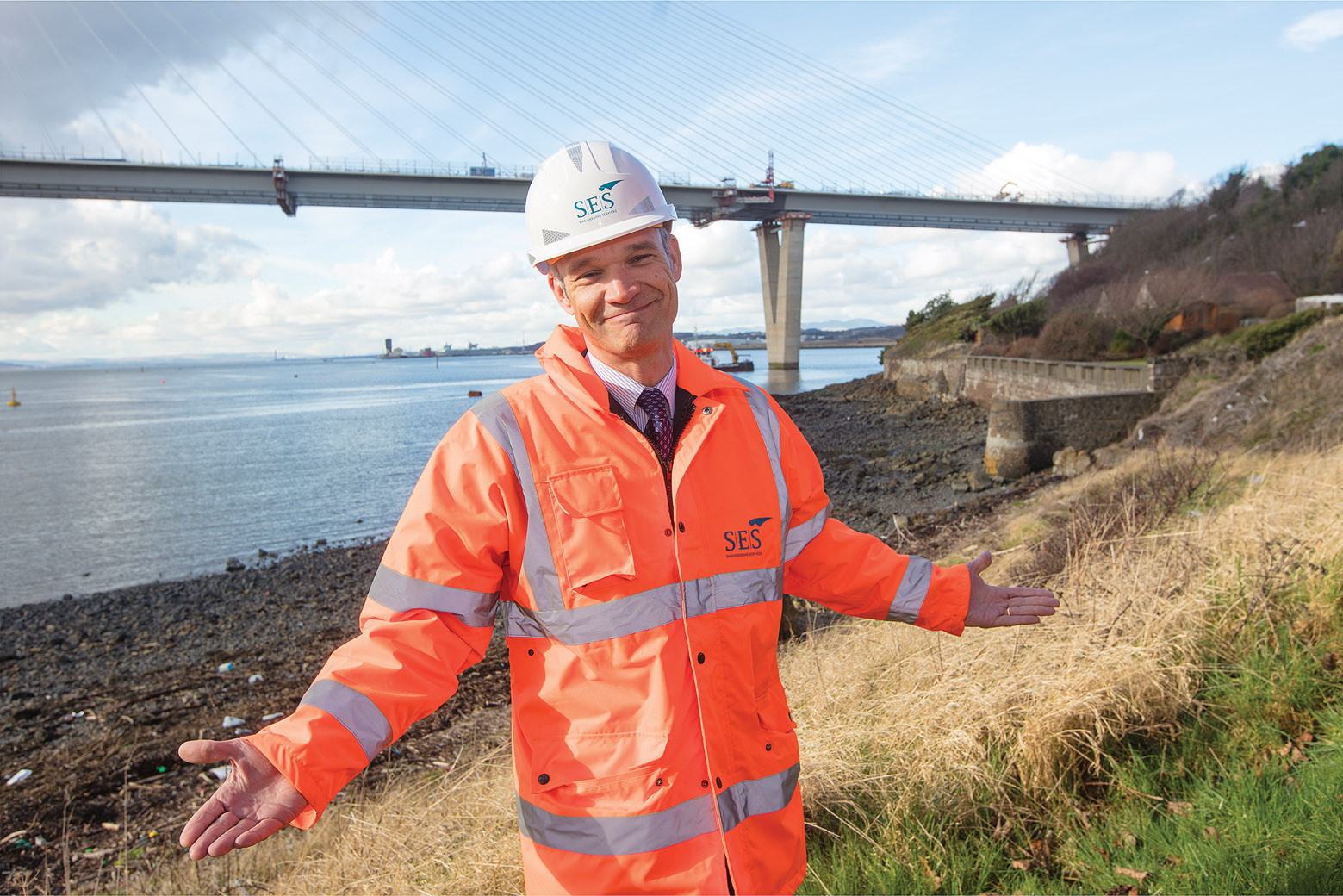 Andy Wall’s first major job as the new managing director at SES Engineering Services could not be more far reaching. The M&E contractor is providing services for the new 2.7km-long Queensferry Crossing, spanning the Firth of Forth. Positioned upstream from the iconic Forth railway bridge, the new road crossing will be the longest three-tower, cable-stayed bridge in the world when it opens this summer.

There are three towers more than 200m high – the north and south towers are 202m and the central tower is 210m – and 23,000 miles of cabling support the 122 sections making up the road deck. SES was appointed by main contractor Forth Crossing Bridge Constructors (FCBC) to install services, and the complexity and scale of the project is reflected in its £20m contract.

The final design for FCBC was undertaken by a joint venture comprising Sweco (formerly Grontmij), Gifford, Ramboll, and Leonhardt Andra and Partners.

Wall was yet to be appointed when SES successfully tendered for the Queensferry Crossing – he joined in August last year – but he is clear about what enabled the company to win the project. It was the focus on BIM and prefabrication, he says, which enabled SES to come up with a prefabricated services strategy that reduced costs, programme time, and the amount of labour hours spent working at height.

‘On every project we look to come up with a prefabrication strategy, which takes as much of the work offsite as possible,’ says Wall. The company’s 15 years’ experience of BIM helped to coordinate the complex cable and pipework runs within the modules, says Wall. ‘We carry significant inhouse design resource, a fairly significant BIM team and we’re BIM Level 2 accredited.’

SES saw the opportunity to prefabricate the majority of services on the bridge using its Prism prefabrication and offsite manufacturing facility, even though the offsite business is primarily aimed at services for buildings, not infrastructure. This was an ambitious project for SES. The crossing its first foray into bridge building, and it meant the company had to open an offsite facility away from its Yorkshire Prism facility for the first time. 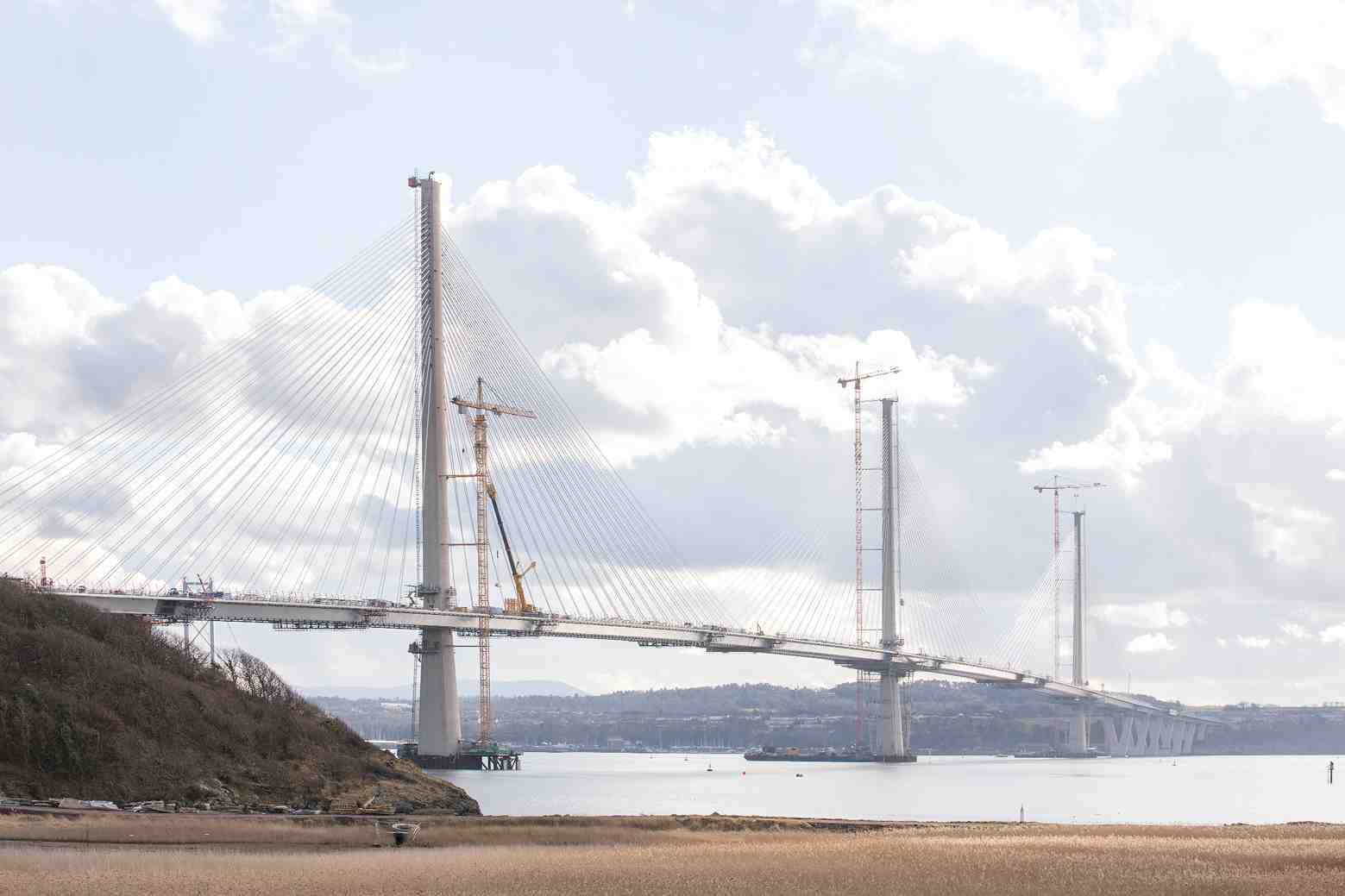 The bridge is serviced with a complex array of pipework, and cabling. As well as a BMS, there are services for CCTV, fire-alarm and security systems, and a water pipe to enable deck washing at regular intervals across the bridge. There is ductwork for a dehumidification ventilation system to prevent corrosion in the cable stays and deck steelwork. Corrosion has been a significant and costly issue for the adjacent Forth Road Bridge, which had no dehumidification system installed when it was built 50 years ago.

There is substantial lightning protection and extensive lighting, which includes 2.7km of deck edge lighting as well as illumination of the towers and bollard lighting.

Using its BIM software SES was able to optimise pre-designed containment systems carrying the cables and pipework. The cables were installed within trays in the bridge deck modules and plugged into corresponding services in other modules.

There were 372 7m-long modules in total and 54 3.5m modules. The steelwork for the modules was sourced from the local supply chain. The steel for the cable-stayed bridge (CSB) deck sections was made in China and shipped to Rosyth close to the northern end of the bridge. Concrete was poured onto the CSB decks within a casting shed after which they were relocated to the finishing area.

SES fitted services and cable trays into ‘flatpack’ steel frames at its York factory, and transported them to Scotland where they  were assembled at SES’s onsite Prism factory. The prefabricated modules were then hoisted up onto the CSB decks and slid into position on ramps.

Normally the modules would be assembled at Prism’s base in Yorkshire, but by completing the second stage in Scotland, SES significantly cut transport delivery times and costs on this project.

This is the first time SES had created an assembly facility outside York. By taking this approach, SES says it minimised waste and transport. It claimed it only required two lorries travelling 500 miles to deliver the modules. If the services modules had been transported from York, SES estimates 60 lorries would have been required travelling 24,000 miles.

Once the services modules had been installed the completed CSB decks were taken out by barge onto the River Forth before being lifted by crane into position and connected to adjoining CSB decks. The only services that had to be fitted in situ on the bridge were the sub-mains cables, which were jointed at 48 points at varying intervals.

With such a large project, SES potentially had an issue with manning two Prism factories simultaneously. By prefabricating the bulk of the services in the York factory, it meant there was a less complex process of installation at the Scottish site. SES originally had three Prism staff at Rosyth, but eventually the factory was handed over to a SES team of locally upskilled labour, and the original Prism team could return to Yorkshire.

The 2.7km bridge is considered part of the adjoining motorway and, in terms of illumination, is defined as ‘rural’, so there is no need for overhead street lighting. However, there was still a substantial requirement for lighting, as indicated by SES’s £2.25m lighting contract. 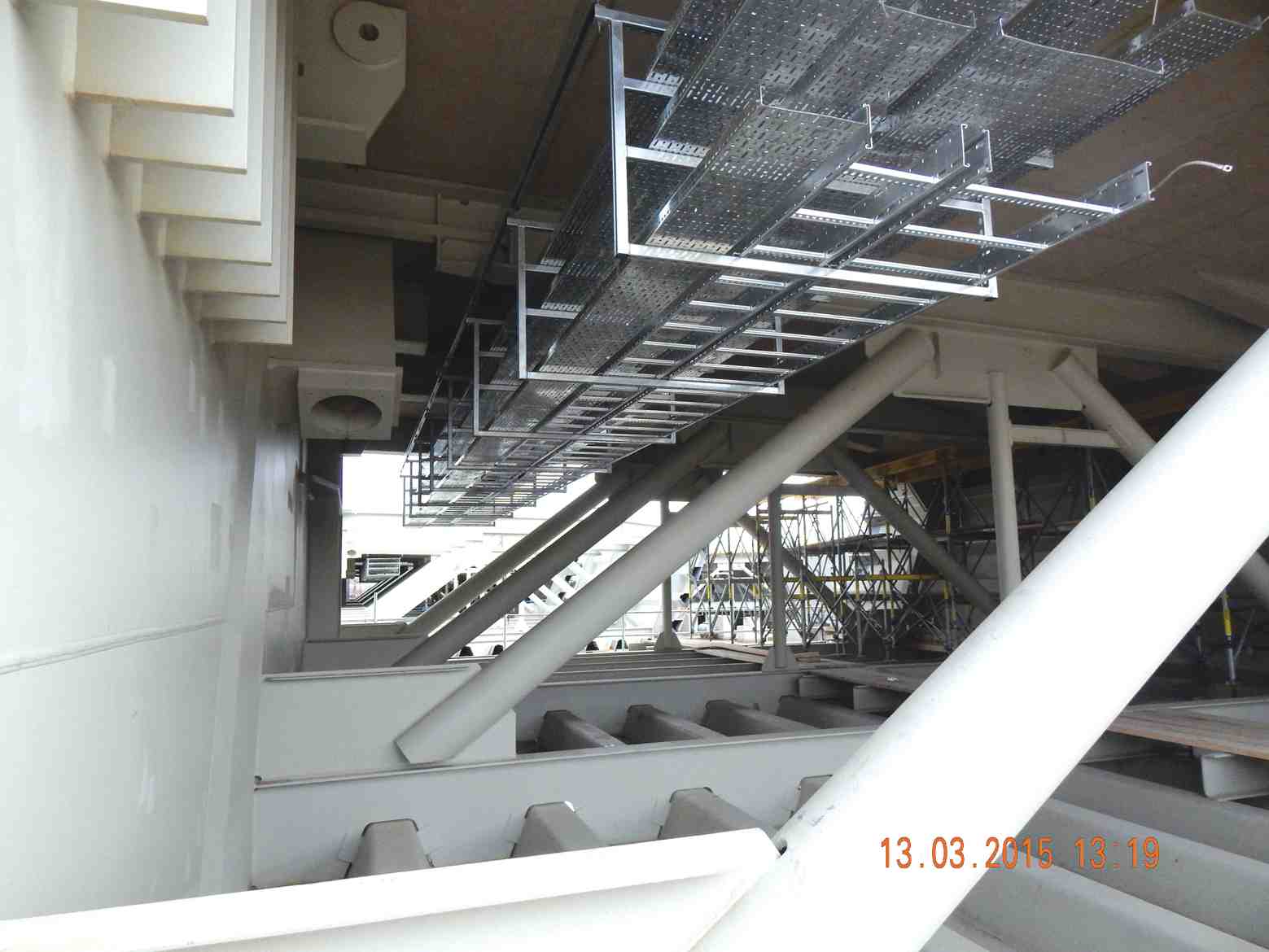 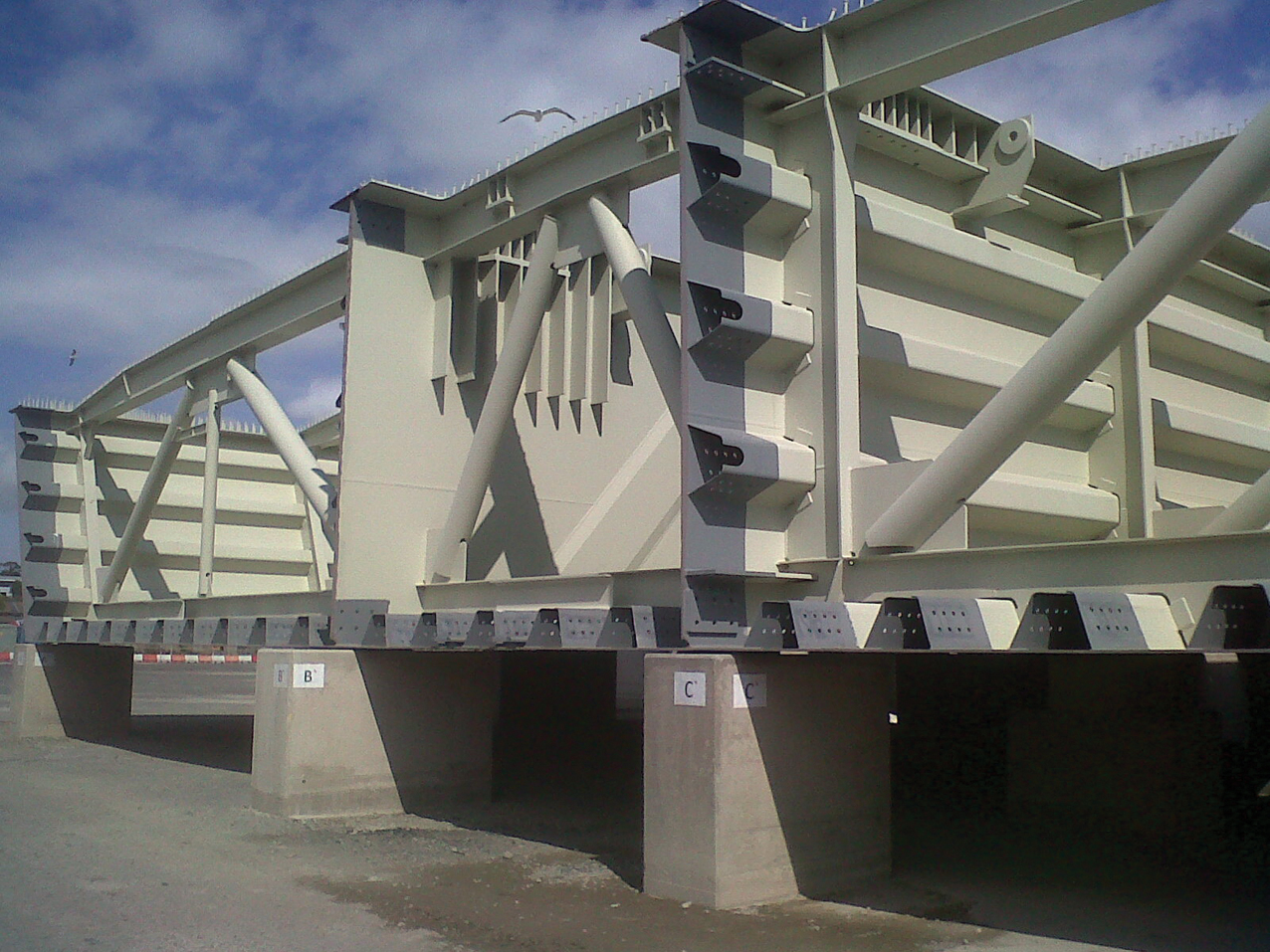 A total of 386 bollards, mounted 1m above the road surface, along part of the bridge carriageways, provide illumination for drivers, while – within the decks – 2,026 luminaires will provide lighting for those servicing electrical equipment and the dehumidification plant.

The 3m acrylic windshield is designed to keep the bridge open in the event of strong gusts. For aesthetic reasons, it has 2,610 LED linear fittings installed, to provide a continuous strip of light across the Forth. The three towers are lit by floodlighting provided by various 1kw and 2kw metal halide lights.

SES claims that use of prefabrication and BIM enabled installation to be reduced to two hours per module. It calculated that its 100,000-hour build time was around 25,000 hours less than if it built the bridge using onsite methods.

Wall also stresses how much BIM helped with cost predictability and waste reduction, significantly strengthening SES’s business case when tendering. Reducing the amount of work at height was also hugely important for the bridge team.

‘From a health and safety perspective, we have taken work into a safer factory environment,’ says Wall. ‘This commitment to offsite engineering dramatically reduced the need for working at height.’ 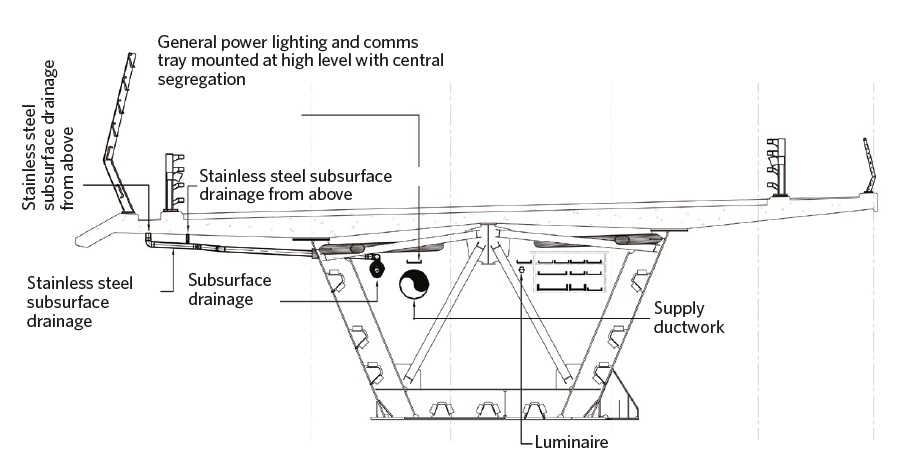 Wall says SES will continue to look at opportunities to prefabricate. He estimates that 90% of all its projects have some element of prefabrication, with some contracts being 50-60% modular.

But Wall warns that clients must be prepared to allow companies such as SES to get involved earlier in the design process, to reap the full benefits of prefabrication.

‘The world is slowly moving towards 3D modelling and prefabrication,’ he says. ‘In terms of buildability, coordination, cost and design, the earlier we can get involved the more benefit we will bring.’

Beyond the factory gates

The Queensferry Crossing is a high-profile project for SES, but it is not the firm’s strategy to actively seek civil engineering projects of this scale. Wall says key sectors targeted by SES include commercial, mixed use, student accommodation, residential, university, research and development, high-tech and pharmaceutical projects.

Wall says that investment in BIM and prefabrication means it is well placed to bid for complicated M&E projects. ‘In the high-tech sector, we can deliver design solutions to customers where products are particularly complex,’ he says. ‘We see ourselves as an engineering business first. Our expertise in building physics gives us the opportunity to get in early and influence the programme – and, ideally, add in prefabrication where there is repeatable work.’

Complex schemes that SES has worked on include bio-containment laboratories for The Pirbright Institute, and the Citylabs science and research centre in Manchester. It recently won a contract with Canary Wharf Contractors to deliver shell and core mechanical services to the 27 floors of the One Bank Street commercial building. SES will be lead coordinator for the main mechanical plantrooms and supply converted consultant models to other trade contractors, to fulfil the BIM requirements. The Prism offsite manufacturing facility will design and deliver nearly 100 heat exchange units, plus pump skids and prefabricated pipework.

Wall says that SES is keen to grow business in London and has boosted its team in the capital since the Wates takeover in October 2015: ‘On average, our MEP packages are £5m – but, in London, they are £10-15m.’

With buildings becoming so complicated, Wall predicts that M&E contractors will take more and more responsibility for the design and construction of building services. ‘They are so complex now, that we are becoming the most important member of the project team,’ says Wall. ‘I can see us being the principal contractor soon,’ he adds with a smile. ‘And that is the aim.’