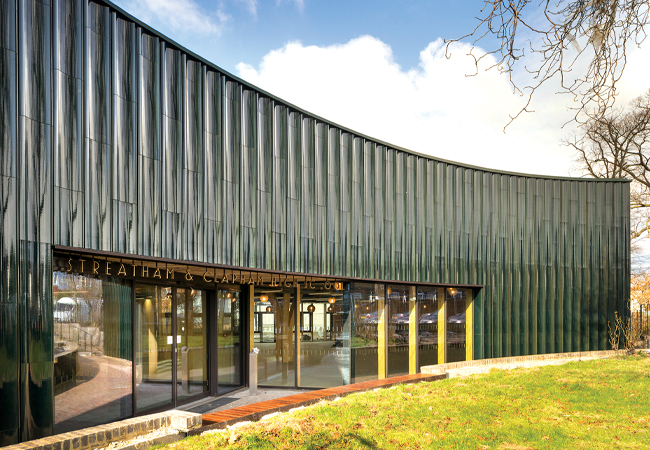 The Girls’ Day School Trust wanted to extend Streatham and Clapham High School by creating a new, flexible sixth-form space, plus a dining hall big enough for use by the entire school. It wanted these spaces to be low-energy and to promote sustainable design to the pupils. The trust also wanted to retain the school’s existing buildings, partly to avoid the cost of demolishing and rebuilding, but also because the school had to remain operational throughout the project.

The school’s location – on a tight, urban site in a residential South London neighbourhood, adjacent to Streatham Common – meant space was at a premium. The innovative solution, developed by Cottrell & Vermeulen Architecture, working with OR Consulting Engineers, was to place the new sixth-form centre on the roof of the school’s main three-storey building and to slot the dining hall into a compact space between the school’s eastern elevation and the street.

Collaboration and communication were key to the design and construction teams being able to extend the school while keeping it fully operational. (See panel).

In recognition of its use of integrated processes to facilitate this, OR Consulting won the Collaboration Award at this year’s CIBSE Building Performance Awards. The judges said the project showed ‘a clear structured and collaborative approach with an exemplar use of post-occupancy evaluation’.

Phase 1 was to construct the sixth-form centre. It comprises a row of south-facing classrooms, offices and a science laboratory, all of which are entered from a connecting spine corridor at the rear. The corridor is bookended by a study space to the west and the sixth-form common room to the east.

The centre is constructed from lightweight cross-laminated timber (CLT) panels mounted on a steel subframe. Internally, the CLT panels are left exposed, along with the crossed-glulam columns supporting the roof and the timber window mullions. The exposed timber gives the rooms a warm, natural appearance, enhanced by daylight, which floods the space from a south-facing curtain wall that is set beneath an overhanging roof to limit solar gain.

The south-facing, full-height glazing is supplemented at the back of the spaces by a linear, north-facing clerestory window. ‘The clerestory introduces daylight deep into the space, to provide a daylight factor of around 5%,’ says Peter Roberts, director and founder of OR Consulting Engineers, the project’s building services consultants. ‘To save energy, daylight-level sensing is integrated with absence-detection controls; there is also local lighting control for interactive teaching.’

The clerestory window is fundamental to the rooftop extension’s ventilation strategy. In summer, spaces have been designed to be naturally ventilated, with air entering at low level through manually opening windows in the full-height, south-facing glazing and exiting at high level through the north-facing clerestory. The roof profile was developed through modelling to assist with the ventilation strategy.

‘We created a roof profile with a flat soffit pitching up to the clerestory window that would create a reservoir of heat at the top of the space. We vent air out through the clerestory window to cross-ventilate the spaces,’ says Roberts. ‘All teaching spaces are naturally ventilated and passively cooled; we modelled them [in accordance with the methods] in CIBSE TM52 The limits of thermal comfort: avoiding overheating in European buildings to ensure they would not overheat.’

OR Consulting has exploited an area of pitched south-facing roof that rises over the clerestory window to accommodate a row of photovoltaic panels (PVs). ‘There’s 80m2 of PV, installed as part of our carbon-reduction strategy, connected to the school’s electrical infrastructure, with the surplus exported to the Grid,’ says Roberts.

To help pupils and teachers understand how the building works, the design team has placed operating instructions – written in what Roberts terms ‘layman’s language’ – next to each element. For example: ‘In summer, please open these windows to cool the space’; ‘In winter, please keep windows closed to reduce carbon emissions’. 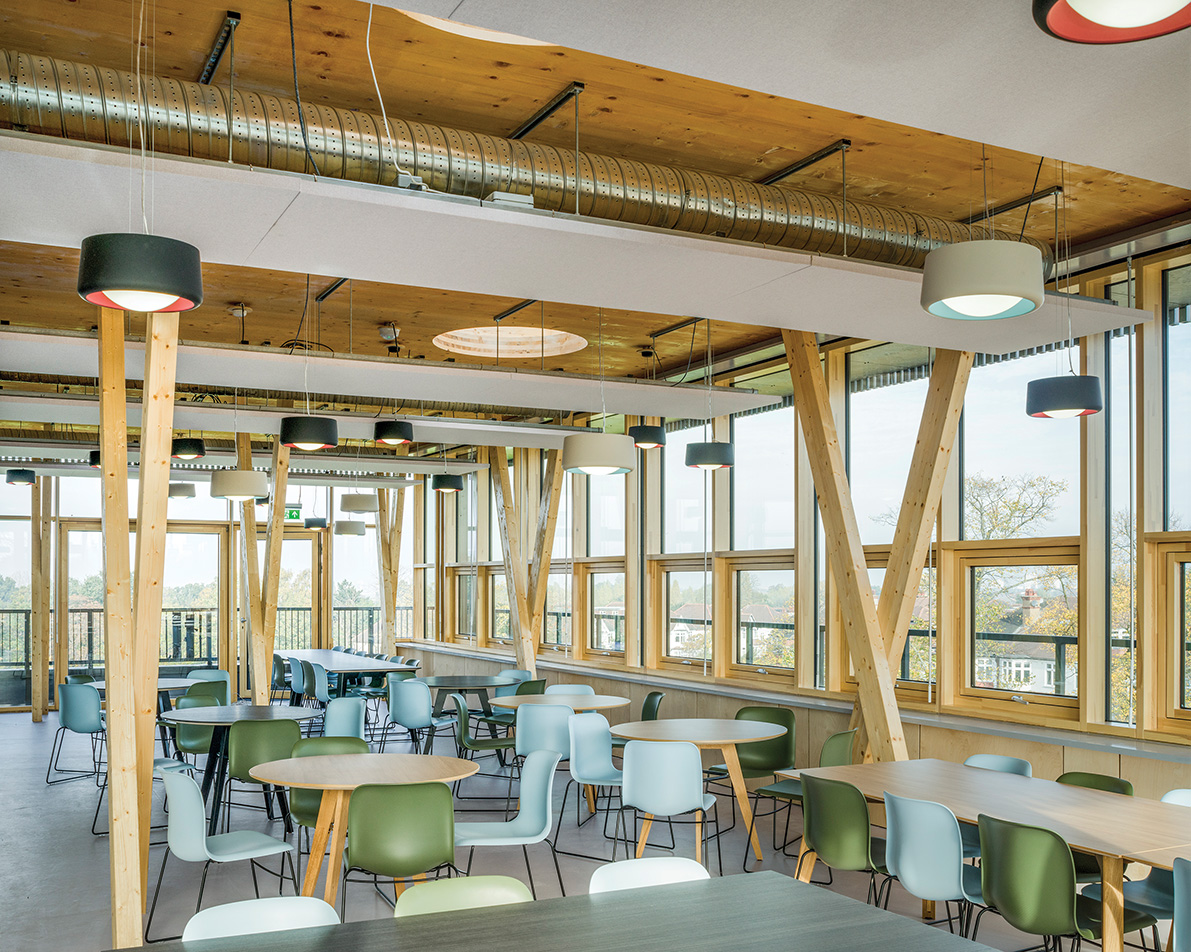 ‘Once people understand the controls – why they’re there and what they do – they get more comfortable with their use,’ says Roberts, who adds that the sixth-form spaces are designed to be mechanically ventilated to prevent the need to open windows in winter. ‘We’ve kept the design as simple and passive as possible; it is predominantly a natural ventilation system with heat-recovery ventilation just for the winter.’

Two large- and three small-capacity MVHR units supply fresh air to, and extract stale air from, the spaces via distribution ducts running at high level in the corridor – an arrangement that required careful acoustic detailing: ‘We had to get the acoustic crosstalk details correct to ensure there would be no noise transfer through ventilation ductwork to adjacent classrooms,’ explains Roberts.

Within the spaces, the ducts are concealed above a series of suspended service rafts, which incorporate lighting, electrical distribution, acoustic panels and smoke detectors. ‘In every classroom, all of the services are integrated into the same element, so you have a polished detail,’ says Roberts.

At every stage, the project team gave presentations to the client, teachers, pupils and the school’s neighbours to communicate the design, inform the developing brief, and engage with future building users, says OR’s Peter Roberts.

Workshops with the school gave a detailed understanding of how spaces would be used and how they may change, to ensure solutions would be effective and easily adaptable.

A range of tools and devices were used to facilitate collaboration, including: Breeam, to drive the team to achieve – and in many cases – exceed environmental targets; the development of SketchUp models to communicate ideas; the construction of physical models to communicate design concepts; and Autodesk Revit building information modelling software, to collaboratively develop the design and facilitate installation sequencing. There were also bi-weekly workshops for the team.

The suspended service-raft concept, for example, was adopted only after extensive consultation with the school. ‘Once the CLT was up, the contractor rigged up some temporary supplies and we installed the lighting, ductwork and smoke detectors, so we had a mock-up that was representative of what we were proposing,’ says Roberts. ‘That proved really useful because we used the school’s comments to inform the final design.’

The project adopted a two-stage procurement process to benefit from main contractor Rooff’s input, including buildability, sequencing and prefabrication advice for the CLT and glulam column installation.

After completion of Phase 1, the team engaged in ‘lessons learned’ sessions. ‘One lesson was the need to protect the CLT from UV light to stop it getting bleached; another was the success of the natural ventilation, acoustics and daylighting, which reinforced the argument for these measures in Phase 2,’ says Roberts.

At the handover of each construction phase, separate soft-landing processes were used to communicate the design principles and environmental strategies to enable occupants to operate the building efficiently and to train maintenance staff to operate, maintain, monitor and fine-tune systems.

Heating and IT strategy

In winter, roof-mounted air source heat pumps (ASHP) provide heat to the classrooms via an underfloor system. Two heat pumps, rather than a large, single unit, were used to add resilience to the system, and, as Roberts explains: ‘Low-temperature underfloor heating was necessary to optimise the operating temperature of the heat pumps.’

Stair towers connect the sixth-form centre with the school below, and incorporate new plant areas and a fully accessible passenger lift. The ASHPs are housed in the west rooftop plant enclosure, along with the heating system buffer vessel and one of the heat-reclaim ventilation air handling units.

A new riser links the plantrooms to the second-phase buildings, with services capped off at ground level until completion of the second phase. ‘We designed the project in one go and then split it into two construction phases,’ Roberts says. ‘What was important was establishing the construction phasing early enough to build that into the design.’

Designing the services installation early enabled service cut-outs to be incorporated into the CLT panels during manufacture, to save time on site. ‘Things such as builders’ work had to be agreed so that they could prefabricate the holes in the CLT as part of the manufacturing process,’ explains Roberts, who adds that there was very little opportunity for prefabrication of building services. ‘Because the CLT was supplied in sheets, we were not able to crane in completed rooms, so we had to install the systems on site. The shower pods were the most significant elements we were able to prefabricate.’ 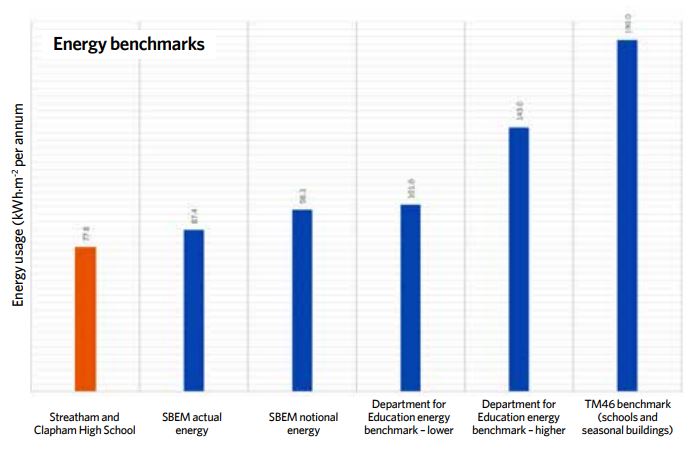 One of the challenges with using a relatively lightweight material such as CLT for teaching spaces is the need to prevent flanking transmission, for the extension to comply with Building Bulletin 93: acoustic design of schools – performance standards. Flanking transmission is when sound transmits between spaces indirectly by going around a wall, rather than directly through it.

Usually, when two CLT walls butt up to each other, a plasterboard inner layer serves to mask the joint to prevent flanking transmission. But, explains Roberts: ‘Because CLT is a beautiful material, architects want it exposed, so all you have, from an acoustic perspective, is a butted joint, which is capable of flanking transmission.’

So, OR Consulting developed a detail based on concealing compressed mineral wool in the joint and attaching plasterboard to one side of the CLT panels.

‘This allowed the CLT to remain exposed while preventing flanking transmission; it also prevented sound transmission via the services installed in the walls,’ said Roberts.

Keeping the CLT exposed also impacted the IT strategy. Rather than flood-wire the rooms with data points, the designers limited each classroom to a maximum of two wall-mounted data points and to using Wi-Fi-enabled equipment. ‘At the time, this solution was seen as a progressive approach for a school to take,’ says Roberts.

After the rooftop sixth-form centre was completed in 2016, construction of Phase 2 began. This comprised a 725m2 ground-floor extension, with a new dining hall/multi-use space, kitchen, entrance and reception.

The dining block, with its distinctive, green ceramic cladding, has a green roof to reduce peak rainwater run-off and added insulation to cut heat losses. Like the sixth-form extension, it is naturally ventilated in summer and the roof rises up at the perimeter to create a high spot to vent out hot air and encourage cross-ventilation. The internal space also features an exposed CLT structure supported on glulam columns.

Throughout Phase 1, the existing kitchen remained operational; the school then decanted the sixth form to its new rooftop home to free up space for a temporary dining and kitchen facility, which was installed in the creative arts block for use during Phase 2 works. These were completed in autumn 2018.

‘Because of the way everyone engaged in the project, we delivered something special,’ says Roberts.

The 2022 CIBSE Building Performance Awards are open for entries.