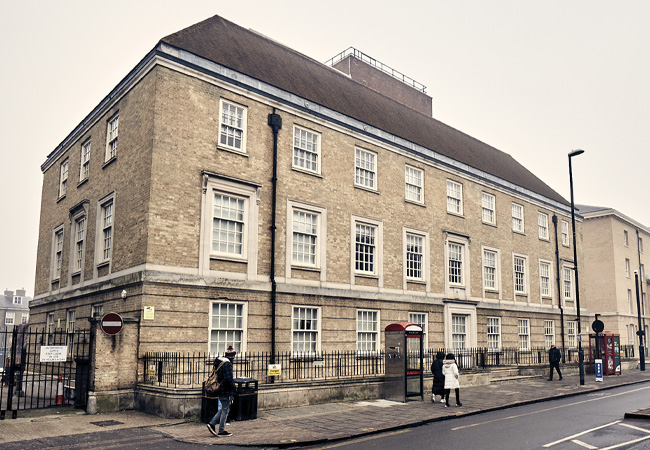 Over the next 10 months, the Entopia Building – a retrofitted 1930s telephone exchange at 1 Regent Street, Cambridge – will be transformed into an ultra-low carbon headquarters for the University of Cambridge Institute for Sustainability Leadership.

The building, which is undergoing a deep energy retrofit to the Passivhaus standard EnerPHit, aims to be an exemplar in office refurbishment. As well as seeking Breeam Outstanding and Well Standard Gold certification, the project is applying circular economy principles to minimise the volume and impact of resources used in its development (see panel, ‘Circular considerations’ on page 44).

The client is the driving force behind the high sustainability ambition and a team was put together who could work collaboratively to deliver it.

The deep retrofit is projected to result in an 80% saving in whole-life carbon emissions compared with a standard office refurbishment, and to deliver 75% lower heating demand compared with an average office building.

The heating strategy for the building is based on the fabric-first principles that have become synonymous with the Passivhaus standard. Its well-insulated, airtight approach is used to reduce heat demand, so a small-scale, all-air system can be used effectively.

Primary heating, and cooling, is provided by the central ventilation system’s AHU, fitted with a 65kW integrated air source reverse-cycle heat pump. This heats – or cools – incoming air, distributing it throughout the building, and exchanges heat with the exhaust air, depending on demand. The central ventilation AHU is operated and controlled by variable air volume (VAV) mechanical control dampers – linked to room temperature and CO2 sensors – that alter the amount of air going to various zones so they can be conditioned accordingly, while the fans maintain a required pressure based on the VAV’s damper positions.

Michael Williams, project engineer at BDP, which is carrying out MEP, says this type of all-air system is only possible when used with the exacting fabric-efficiency measures required by high performance standards such as Passivhaus EnerPHit.

‘Heating by air is quite inefficient, because air is not a particularly good medium for transporting energy,’ Williams says. ‘But by going for a fabric-first approach, and reducing the conduction and infiltration losses through fabric and airtightness measures, we’ve driven down the space heating and comfort cooling demands, making the all-air system viable.’

He adds: ‘If you don’t put in place carefully considered measures and invest in creating a thermally efficient fabric and airtight building, you will lose heat through infiltration, drafts and exfiltration. This is exacerbated on an air system, where convection is the main heat-transfer mechanism. In a leaky building, structural air leakage is a big no-no, because it gets blown out through the gaps in the walls and absorbed into the walls.’

Secondary heating and cooling are provided by electric panel radiators and variable refrigerant flow-based fan coil units to cater for certain spaces in the building, such as cellular offices, meeting rooms and designated conference spaces. This gives some additional supplementary heating or cooling when required – for example, during big conferences or events when more cooling is needed to tackle latent gains.

Williams says: ‘The idea is that [these units] are few and far between, and not in close control for the whole year. It’s a long game, because we’re looking to reduce consumption over an annual average – so they can give a boost when needed, but it’s a more of a backup.’

During the initial feasibility process, a more traditional approach using a gas-fired boiler system with four-pipe fan coil units, and chillers, was ruled out – due to the sustainability ambitions of the project. ‘We did away with gas mains; we stripped that back and we’re going to an all-electric building,’ says Williams.

‘In a way, we’re future-proofing it to get onto the Grid, because, undoubtedly, we’ll move to all-electric buildings. If not all-air systems, the future will be a mix, with central all-air systems and heat pumps, or other electric technology, driving the main systems.’

As a result of the relatively small domestic hot-water (DHW) demand, the client opted to use electric showers and a mix of instantaneous and point-of-use water heaters for basins and sinks.

To minimise distribution pipework losses and mitigate overheating in corridors, direct electric heating was chosen because the DHW loads in the building are relatively low. ‘We felt that a more economical and effective solution was to use point-of-use. It also factored into maintenance and legionella risk, so we can maintain local systems a lot better,’ says Williams.

The rooftop PV canopy, which will provide supplementary power on site, will offset some of those demands for the building, he adds. ‘It’s more a considered application, rather than a bolt-on.’

The biggest challenges with existing sites are constraints such as the geometry, orientation and form factor – fixed variables that cannot be changed. ‘It’s a big challenge on the Entopia building because of the “abnormals” you find on site during construction,’ says Williams.

He describes the property as a ‘patchwork’ of previous retrofit and fit-out projects that have been added to over time, so things – such as perimeter trenches – get uncovered as work progresses. But he says the biggest challenge of a deep energy retrofit is the risk of adding measures that might have unintended consequences for other parts of the building.

For example, the Entopia Building, which is situated in a conservation area, could not be insulated externally because of planning restrictions. ‘We have had to internally insulate, which creates the risk of interstitial condensation, compromising the building fabric and the building structure elsewhere,’ says Williams.

To ensure the internal insulation didn’t introduce a condensation risk, the team did thermal and hygroscopic (moisture) modelling of the wall build-up. ‘We took the wall build-ups and ran them through a computer programme to simulate the moisture transfer through them. This gave us confidence that the architectural and engineering specifications would stack up, so we’re not introducing any risk to the existing building,’ Williams says.

‘You’ve got to be really careful how you address each challenge, especially with a fabric-first approach. It’s about understanding the measure, the driving force behind it, and what implications it might have for other aspects of the existing design – and whether we can design to accommodate it, or empathise with the existing context, while trying to achieve the difficult standards of Passivhaus.’

The project balances the technical demands of meeting the EnerPHit standard with the sensitivities of dealing with a building in a conservation area. When it formally opens in early 2022, CISL and the team hope the building will become an exemplar for the evolution of sustainable building refurbishment approaches in the UK.

Dame Polly Courtice, founder director at CISL, said: ‘We wanted the retrofit of our new HQ, The Entopia Building, to reflect the leadership and collaboration we engender through our projects, and to deliver the integrated social and environmental performance we advocate for as an Institute.

‘It was therefore important for us to work with partners who would be energised by the sustainability mission and collaborate to bring their own ideas and solutions to help us achieve multiple social and environmental standards.’