The building services for the vast courtyard at the Samson Pavilion in Cleveland, Ohio, is designed for an annual temperature swing of up to 42°C, and a wide variety of occupancies – from a few dozen people walking through the space to a 1,200-strong graduation ceremony.

It was therefore designed for substantial flexibility, but its architect and environmental engineer Foster + Partners could not have foreseen its transformation into a Covid-19 surge hospital within a year of opening.

In April 2020, the Samson Pavilion was temporarily converted to a surge hospital with the moniker Hope Hospital. The courtyard, named after past-president of Cleveland Clinic Delos M Cosgrove MD, provided 327 beds.

The building was converted in less than a month and the HVAC systems’ flexibility and capacity meant they hardly needed altering with the refit concentrating primarily on fitting piped oxygen and UPS sockets.

In the courtyard, the high-volume fresh air displacement ventilation, underfloor thermal systems and high daylight levels have come into their own, providing comfortable and safe treatment areas for any prospective patients.

Part of the Health Education Campus in Ohio, the 44,315m2 Samson Pavilion building accommodates around 2,200 students from Case Western Reserve University’s dental, nursing, and medical schools, in addition to those from Cleveland Clinic Lerner College of Medicine. Its most significant feature is the four-storey courtyard, which is open on all four sides to the two institutions’ medical schools and colleges.

The courtyard was given the temporary moniker Hope Hospital, and provided much of the emergency 1,008-bed capacity of the Samson Pavilion

Designed as a large, social and academic space for faculty, staff and students, this 24m-high space has a wide variety of uses from informal meetings to graduation ceremonies.

‘It’s an important hub, it’s very adaptable and brings together the client philosophy for the building – encapsulating a healthy, holistic, transparent ethos,’ says environmental engineer Emma Clifford, who is an associate partner at Foster + Partners and multidisciplinary lead on the project.

As well as the atrium, other shared spaces in the building encourage collaboration across the health disciplines. These include a fully equipped conference centre on the first floor with a 650m2 auditorium with supporting spaces, designed to promote group learning, with recording and broadcast.

Foster + Partners was engaged for the architectural and environmental design and MEP engineering. Smith Seckman Reid (SSR) was its local engineering collaborator through the early design stages and then engineer of record on the project.

One of the challenges was the large seasonal variations in temperature in Cleveland, ranging from 35°C in summer to -17°C in winter. The severe winters meant renewable energy from PV or wind technology could not be used effectively to offset building energy demand. With such wide variation in occupation loads and external temperature, extensive modelling had to be done to ensure the design was optimised for thermal comfort, system selection and energy efficiency.

The skylight design, for example, required analysis of daylight penetration, glare, heat loss, snow and ice build-up and thermal impacts to the space below. The modelling helped to determine the pitch of the roof trusses necessary to allow seasonal snowfall to slide off the glass and onto the solid roof around the courtyard.

‘Intense design collaboration across the integrated design team was fundamental to creating a viable year-round space for a wide range of functions,’ says Clifford.

The services strategy of the central courtyard uses displacement ventilation for the occupied zones. Thermal studies were carried out in circulation zones open to the atrium, where there may have been possible downdraft in cold winter weather. At the courtyard’s ground level, the underfloor heating and cooling needed careful thermal and energy analysis to support the design, requiring close collaboration with manufacturers and facilities management.

To determine the optimum system selection and configuration, thermal loads and iterative thermal modelling was undertaken. The thermal comfort studies mainly focused on the small winter garden areas within the extreme north and south ends of the building, and the perimeter zones, because of their sensitivity to significant climatic influences. ‘We had to ascertain whether under extreme internal loading these areas could maintain comfort,’ says Clifford. The team used IES’s MacroFlo virtual environment module to calculate bulk airflow movement between zones and assess any local thermal discomfort.

The project was targeting LEED Gold, so it was essential the energy credits were correctly estimated from the early stages of design. At each stage, and when major changes were proposed, sensitivity analyses or even full energy models were simulated.

Active chilled beams are used to provide heating and cooling on the building’s administrative fourth floor. The system comprises 848 Price 0.9-metre or 1.2-metre long two-pipe beams with seasonal changeover valves. They are controlled via VAV boxes to modulate supply air with flowrates of up to 97 L.s-1. Here, supply air temperature is held constant until a zone falls below its setpoint. When a zone is above its setpoint, the damper opens to allow air into the zone to cool the space.

Applying the baseline specification of ASHRAE Standard 90.1 ‘Energy Efficiency for Commercial/High-Rise Residential Buildings’ and using more exacting local weather design conditions modelling predicts a 6% energy saving with the use of the DOAS with chilled beams, compared with a VAV-only solution – in large part this is likely because of free-cooling from direct use of a higher flow rate of outdoor air. Using the temperature of the outdoor air more directly helped to improve efficiency in what is a cooling-led load. 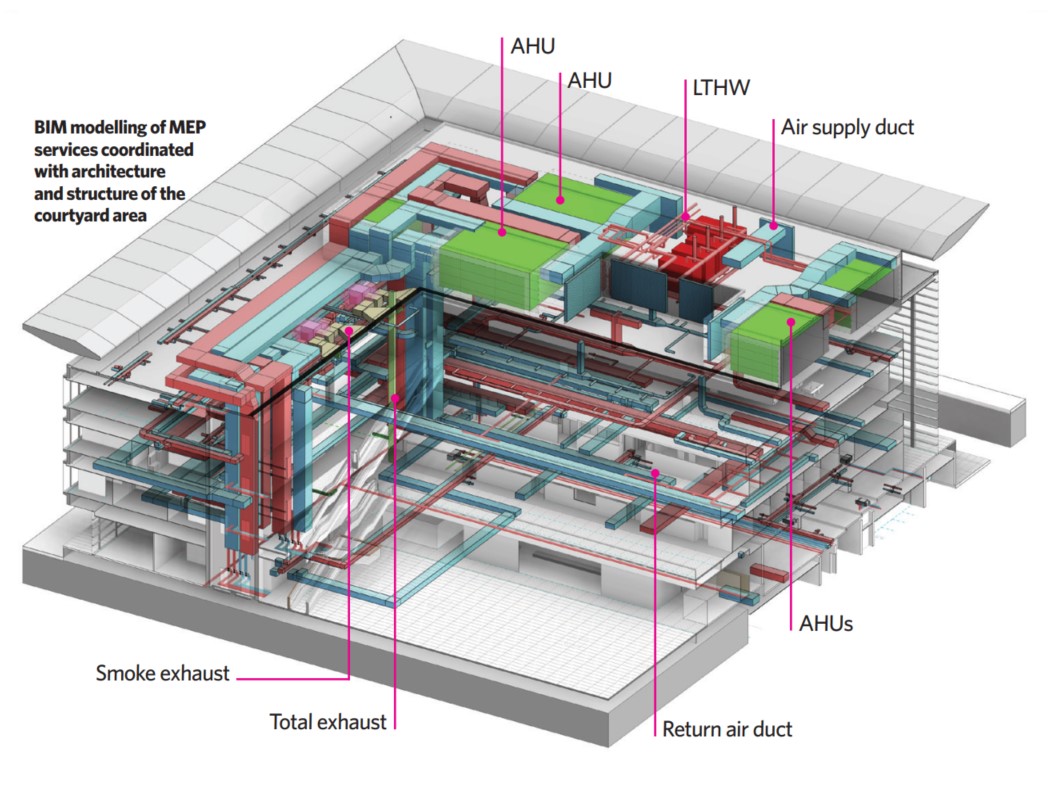 In reality though, there’s even more of an energy saving than on that basic standalone modelled comparison, says Clifford. ‘When you get to the LEED credit on an energy-cost basis, there’s a vast improvement in performance, as the DOAS and chilled beams are a small part of a family of energy efficient solutions being used – which include heat recovery, efficient fan-wall AHUs, variable-speed fans and a high-performance envelope,’ she says. ‘Along with the other elements affecting building performance, this improved performance significantly against Ashrae 90.1.’

The use of chilled beams wasn’t a typical approach for the client, who would initially have preferred to have used VAV throughout. ‘But this energy-saving synergy between the operation of the DOAS and the beams was pretty critical, alongside the improved quality of internal environment,’ says Clifford.

‘We didn’t feel that using a VAV-only solution was appropriate, especially as the integrated team improved the façade performance to such an extent that the normal perimeter loads did not apply.’

Clifford says an integrated approach meant client concerns, particularly on maintenance, could be tackled at an early stage.

The active chilled beams were configured with a modular ceiling grid system that enabled a flexible floor layout that was developed with the client to allow reconfiguration of the space in future. 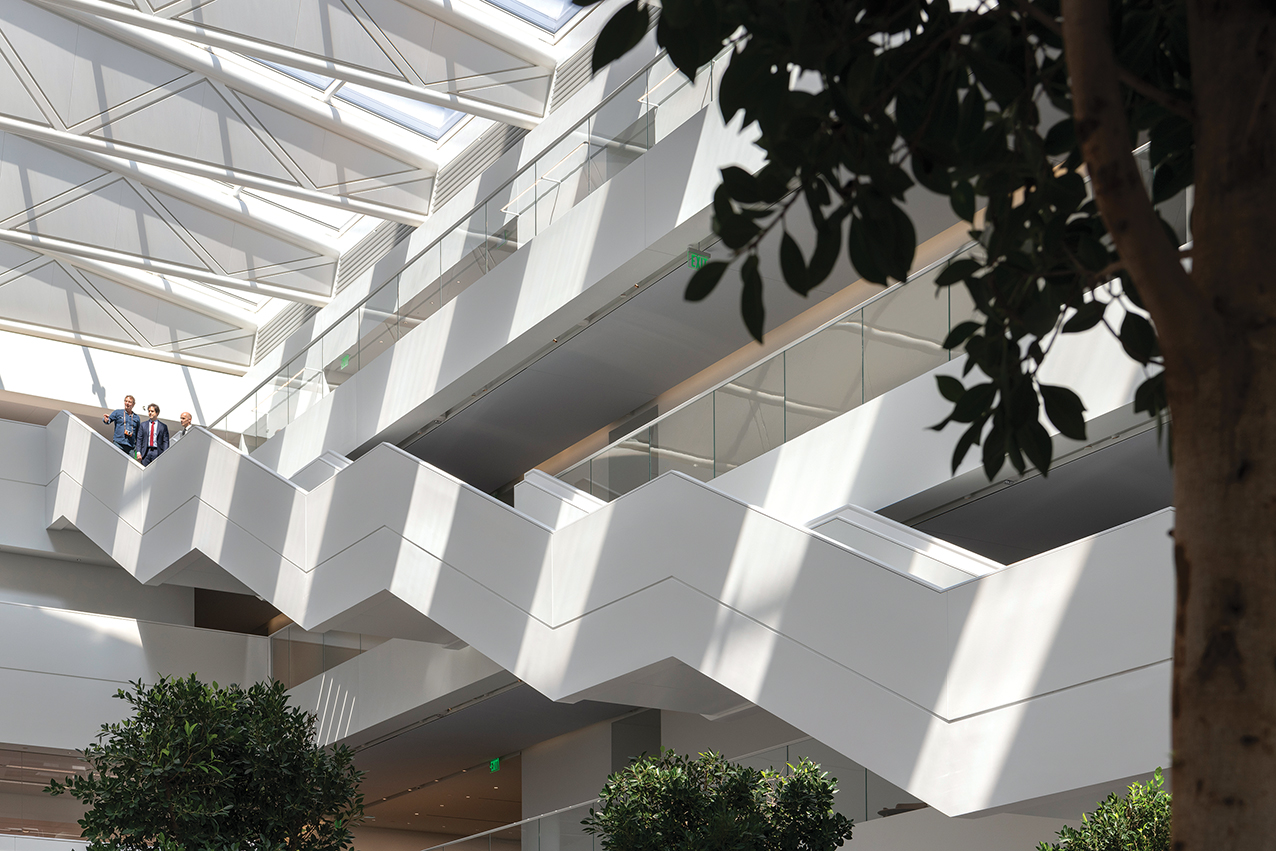 ‘A significant element of our systems design and resilience strategy focused on enabling future flexibility in refit and function,’ explains Clifford. ‘This generated a robust four-riser layout with central plant and distribution capacity to absorb future change.’

The building has symmetry across its four corners, with each riser and the footprint of roof plant above symmetrical, so that within each quadrant there is flexibility for maximum reconfiguration. ‘Even if the service isn’t fitted out into a particular riser, there is the capacity to fit out later. Each riser is big enough to serve the “worst-case” quadrant, so departments can move their facilities around and work up to quite a high density of function, while still having the plant space and riser capacity to accommodate changing needs,’ says Clifford.

Sensors are used to check room temperature and humidity to calculate space dewpoint; if it is above 14.4°C, the chilled water set point is adjusted to 1.11K above dewpoint and generates a building automation system response, whereby VFD-driven AHU supply fans continually adjust the air volume supplied.

The building’s perimeter zones were carefully treated to ensure occupants are comfortable. Ashrae 55 Thermal Environmental Conditions for Human Occupancy was used to assess the temperature gradients at the façade glazing to ensure that comfort criteria were met in the difficult conditions. Additional perimeter services were applied as necessary.

Clifford says collaboration with the client was key in enabling innovative energy efficient solutions, which helped create the state-of-the-art health education pavilion the client desired. Its recent Covid-19 facility role is testament to the flexible HVAC system, and the healthy, comfortable environment it has enabled.