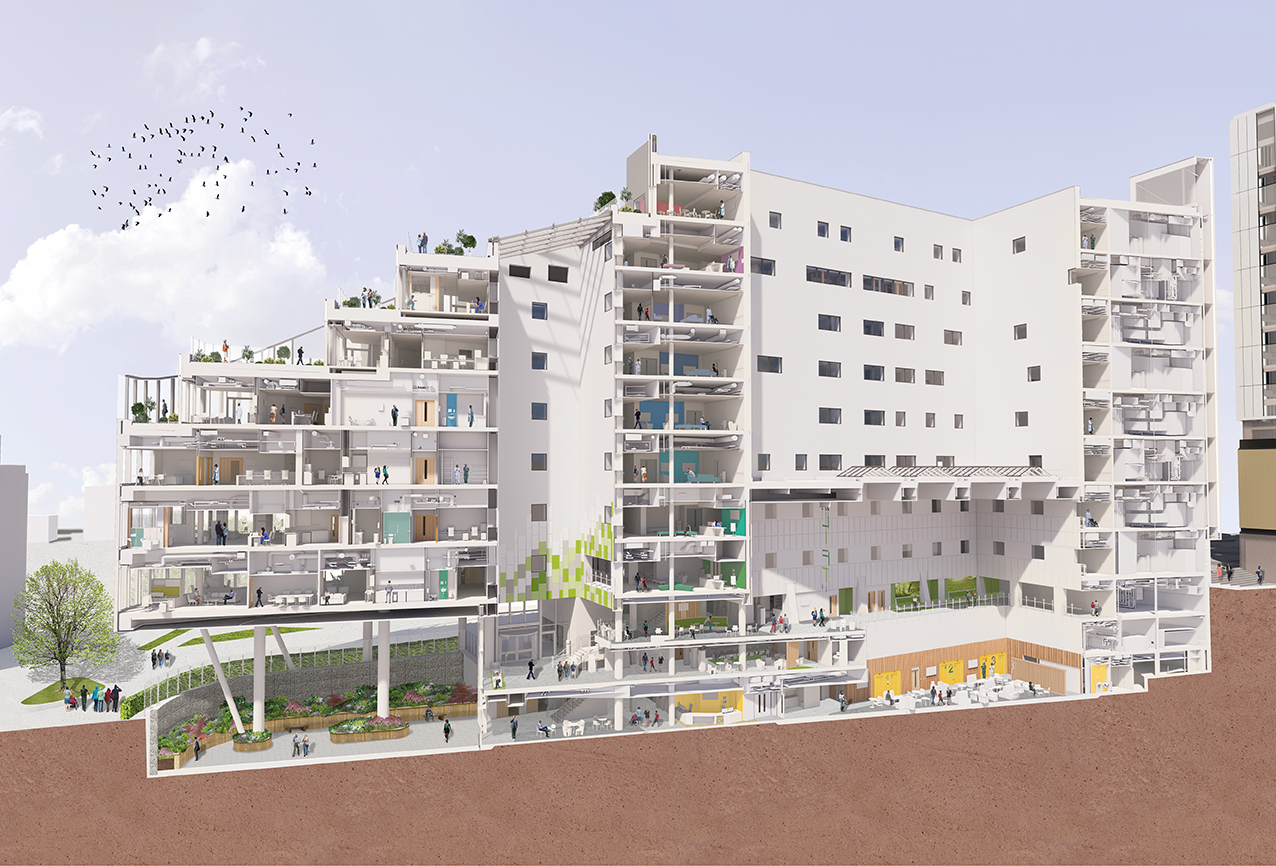 ‘The strategy we pitched was that we can deliver this project more efficiently and effectively by applying the benefits of modern methods of construction (MMC) and Design for Manufacture and Assembly (DfMA),’ explains Richard Mann, head of healthcare and science for Aecom UK and Ireland.

Mann is talking about the award of the contract to design and build the 11-storey Clatterbridge Cancer Centre in Liverpool, where digital planning and design software were used extensively to enable the offsite manufacture and assembly of the majority of the project’s construction elements.

He says prefabrication and modularisation aid construction, improve quality of build, and reduce project timescales and onsite health and safety risks. Adopting the technique helped the team bring the project in on time and on budget, despite a change in scope midway through the design that added three additional floors, and construction completion being impacted by the pandemic.

The new hospital was needed to deliver highly specialist cancer care, including chemotherapy, immunotherapy and radiotherapy. It is part of a £162m investment to transform cancer care for Cheshire and Merseyside. The NHS Foundation Trust’s brief for the scheme was to design a visually striking facility that would create a positive and uplifting environment centred around patient and staff needs.

Working with architect BDP and contractor Laing O’Rourke, Aecom engineered the Breeam Excellent design for a wedge-shaped building to sit on a constrained triangular site adjacent to the Royal Liverpool University Hospital. To enhance patient wellbeing, healing and recovery, the design incorporates patient access to external landscaped areas on the upper levels of the building’s distinctive curved prow, where wards and the chemotherapy floor are located.

Beneath the prow, a sunken landscaped courtyard provides a covered winter garden, while, internally, a large, bright atrium allows daylight to flood the building’s core. Away from the patient areas, at the opposite end from the prow, is the building’s plantroom tower. This is, perhaps, the most obvious manifestation of the scheme’s DfMA approach to building services engineering.

Each floor of the building has a dedicated plantroom; these are stacked vertically, one on top of the other. ‘The original intention was that each plantroom would be built off-site, for delivery on the back of a truck,’ says Chris Taylor, Aecom’s MEP healthcare lead for the north of England. However, ‘logistical issues’ meant the plantroom enclosures were, instead, built in situ, on a concrete frame, with all of the MEP plant pre-assembled and moved into the plantrooms on skids.

Taylor adds that there are significant benefits associated with the plant-tower approach, in terms of operational and embodied energy, primarily because it enables plant to be situated adjacent to the department it serves. 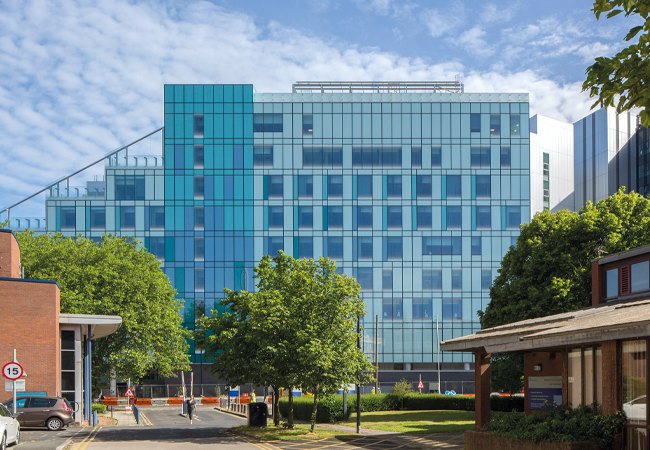 A view towards Liverpool Metropolitan Cathedral from the Clatterbridge Cancer Centre

The arrangement will also make it easier to reconfigure the floors more easily in the future. ‘Normally, hospitals have interstitial plant floors and lots of risers to distribute services vertically,’ Taylor says. ‘Adopting a horizontal approach to building services distribution improves flexibility and adaptability of the building, while facilitating the design for manufacture approach.’

The only services that still run vertically are centralised ones, including the main electrical riser, heating, chilled water and domestic hot water.

From the plantrooms, modularised piped and ducted services are distributed at high level in the corridors, including to 110 individual inpatient bedrooms.

A central air handling unit (AHU) ventilates each floor via the ductwork distributed above the corridor false ceiling. The scheme is full fresh air, with air change rates based on the clinical function of each space.

A digital model based on CIBSE TM54 was created to simulate energy use in operation. It includes plant efficiencies and operational profiles, along with details of the building fabric and ‘everything we know about the building’, says Taylor.

Information included occupancy and regulated and unregulated energy use, which it combined with CIBSE weather data to understand how the building is expected to operate. The model and system performance were then validated during the building’s commissioning period, with the model updated to incorporate actual measured operating efficiencies.

Mann says the digital twin which allows Aecom to look at the building’s energy consumption and predict the impact of tweaking set points.

This can then be measured and discussed with the client before making final set point adjustments without affecting the actual building. To populate the digital twin, Aecom was granted read-only access to the hospital’s building energy management system. This allowed the digital energy model to be updated with energy usage data to ensure alignment between it and the building. The process becomes more accurate with each iteration.

‘Using the IES model, we could simulate plant operation and easily make changes to set points and time schedules, so we could assess their impact on energy consumption very quickly,’ says Taylor. ‘By testing our proposed changes on the digital twin, we can make minor adjustments add up to a significant benefit to the client, in terms of a reduction in energy use, without compromising patient comfort.’

‘A lot of areas are not defined in the HTM [Health Technical Memoranda], so, during the early stages, we sat down with the users to understand their requirements for each space. We then proposed environmental conditions to ensure infection-control procedures and air change rates that would allow staff to carry out procedures successfully,’ explains Taylor.

The building envelope features a glazed, curtain wall cladding system. ‘One of the key challenges was that the building needed to be visually striking, so the design went down the route of a glazed cladding system,’ Taylor says.

In helping to develop the design, Aecom undertook an assessment to ensure the envelope achieved an appropriate annual balance between the rate of heat loss and the amount of solar gain, to minimise energy consumption during both heating and cooling seasons. The assessment of solar gain included energy saved by a reduction in the need for artificial lighting. 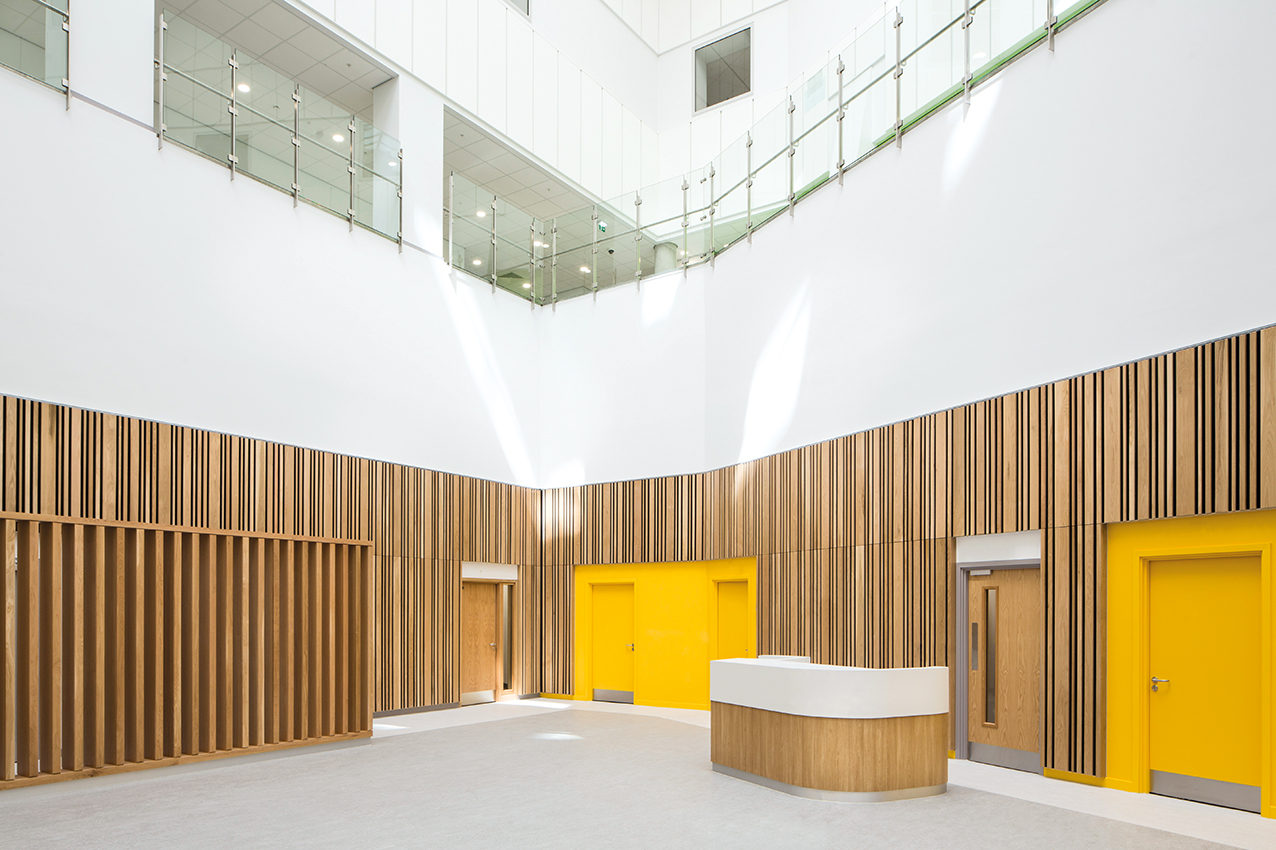 Cancer patients can be very sensitive to environmental conditions, so while the glazed façade provides patients with views out over the city of Liverpool Aecom had to ensure it had no detrimental effects on the thermal comfort of patients’. It used IES software to model the anticipated environmental conditions in all patient spaces. ‘The models were very detailed; they even included an appropriate metabolic rate and appropriate clothing for a patient,’ explains Taylor.

However, because patients respond to treatments in different ways, he says Aecom has built ‘flexibility and capacity’ into the services, so the internal environment can be adapted to suit an individual patient’s requirements’.

Additional solar control has been incorporated on the southern elevation, including frit to some windows and the inclusion of blinds and curtains to minimise heat gains and control glare. ‘The building is predominantly glazed and a portion of the façade faces almost due south, so we needed to enhance the cooling in these areas to ensure comfort criteria could be achieved,’ says Taylor.

Active chilled beams keep patient and clinical spaces on the southern elevation comfortable, while ceiling-mounted radiant panels heat spaces on the northern elevation. The chilled beams are run at an elevated temperature to reduce the risk of condensation occurring. ‘We’re controlling each beam independently so that, if condensation is likely to occur within a space, the connections to that beam are shut off,’ Taylor explains. To further minimise the likelihood of condensation occurring, the supply air is dehumidified. Each AHU incorporates a plate heat exchanger to transfer heat and coolth between the supply and exhaust air streams without cross-contamination.

Cancer patients can be very susceptible to environmental conditions, so while the glazed façade provides patients with views out over the city of Liverpool, Aecom had to ensure it had no detrimental effects on patients’ recovery

Despite its enhanced efficiencies, however, the heat exchanger will only provide sensible cooling, so the chilled water coil of the AHU is used ‘to trim humidity’, Taylor says.

Chilled water to the AHUs, chilled beams and the recirculating fan coil units that serve back-of-house spaces, such as server rooms, are supplied from two roof-mounted air-cooled chillers, while heating is provided from a district energy network, which is set to be decarbonised as part of the wider estate development.

Circulation spaces, entrance areas and basement waiting areas are naturally ventilated, with outside air introduced through glazed rooflights. The environmental modelling for these areas included a check on their ability to maintain comfortable temperatures based on current and predicted climate trends.

The modelling was enhanced to ensure the temperature directly below the glazing did not exceed 35°C, because the rooflight glazing incorporates an internal laminate layer that can soften when the temperature exceeds 40°C, reducing the glazing’s impact resistance.

The project encountered a number of challenges, throughout the design and construction period. Carillion was building the adjacent Royal Liverpool Hospital, which was designed with some services interconnections to Clatterbridge.

Carillion’s collapse in 2017 resulted in some infrastructure elements having to be redesigned and temporary services provided, to ensure the cancer hospital could open. In addition, the project completion and commissioning stages took place during the coronavirus pandemic. Nevertheless, the Clatterbridge Cancer Centre was completed on programme and on budget, and received its first patients in June 2020.

As part of the handover process, Aecom implemented its bespoke soft landings procedure, EVOL+VE, to ensure the building was operating efficiently, reduce operational energy, and assist the facilities management (FM) operators to maintain a comfortable environment for patients and staff. ‘All too often, the designers never remain involved, so there is a huge performance gap between design data and reality,’ explains Mann.

As part of the EVOL+VE process, and alongside the creation of the IES thermal comfort model, Aecom built a digital energy model, based on CIBSE TM54, which it then used to undertake operational energy simulations (see panel, ‘Creating a digital twin’).

Energy and carbon-saving measures implemented so far include reducing the internal space temperature in the spaces with active chilled beams and reviewing operation of the site CHP plant. ‘As the humidity levels in rooms with active chilled beams need close control to prevent condensation, lower internal temperatures can provide a greater energy-recovery benefit, and reduce the AHU reheat requirement,’ says Taylor.

According to Mann, Aecom’s interventions have resulted in the building using 30% to 40% less thermal energy than NHS Benchmarks. ‘Our continuing support to the Trust, through the Aecom EVOL+VE initiative will ensure we continue to reduce the buildings consumed energy. It is running so much better than the trust thought it would because of us working with the FM provider,’ he says.

So, it was no surprise that the scheme won Project of the Year – Healthcare at this year’s CIBSE Building Performance Awards. The judges said: ‘This project can be used by others as an exemplar of how buildings can be designed and then constantly tuned to ensure they continue to perform.’ Hear, hear.

Acoustic engineer and sustainability, including BREEAM and environmental services: Aecom 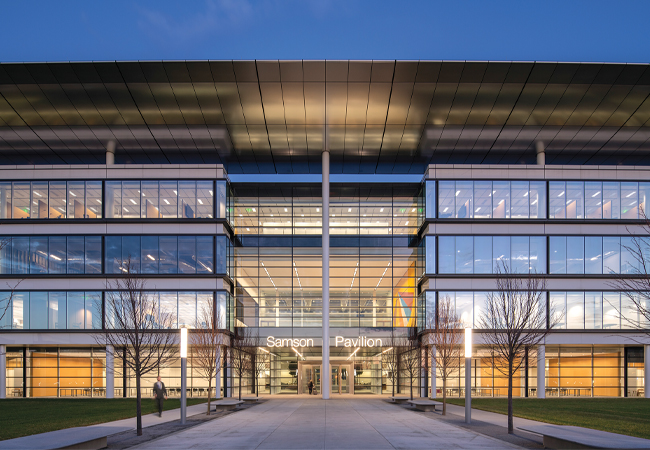