The 198-room Breeze Hotel in Amsterdam is a pioneering, ultra-low-energy building. Developed by Amstelius/Dutch Green Company in association with Borghese Real Estate, it is the first building in the world to use the ‘earth, wind and fire’ natural ventilation concept conceived by engineer Dr Ben Bronsema. As such, it eschews mechanical systems in favour of using the sun, wind and water to heat, cool and ventilate all 11 storeys.

Bronsema was inspired to develop the concept after studying how African termites keep the internal temperature of their mounds at a constant 30°C, even though external temperatures fluctuate from 50°C in the midday sun to almost zero at night. ‘I thought, can we build buildings the way termites do, using natural air conditioning to avoid the need for fans?’ said Bronsema, in a TEDx talk from 2013.

The result of his cogitations was the earth, wind and fire concept, which subsequently became the subject of his PhD at the Technical University, Delft. As part of his research, Bronsema developed the natural air conditioning concept using simple computational modelling. This was refined using computational fluid dynamics and validated using experimental mock-ups of elements of the concept. The Breeze Hotel is the first building to make use of the concept, and Bronsema is working on the project with installation consultant Green Building Engineering and contractor Van Delft. 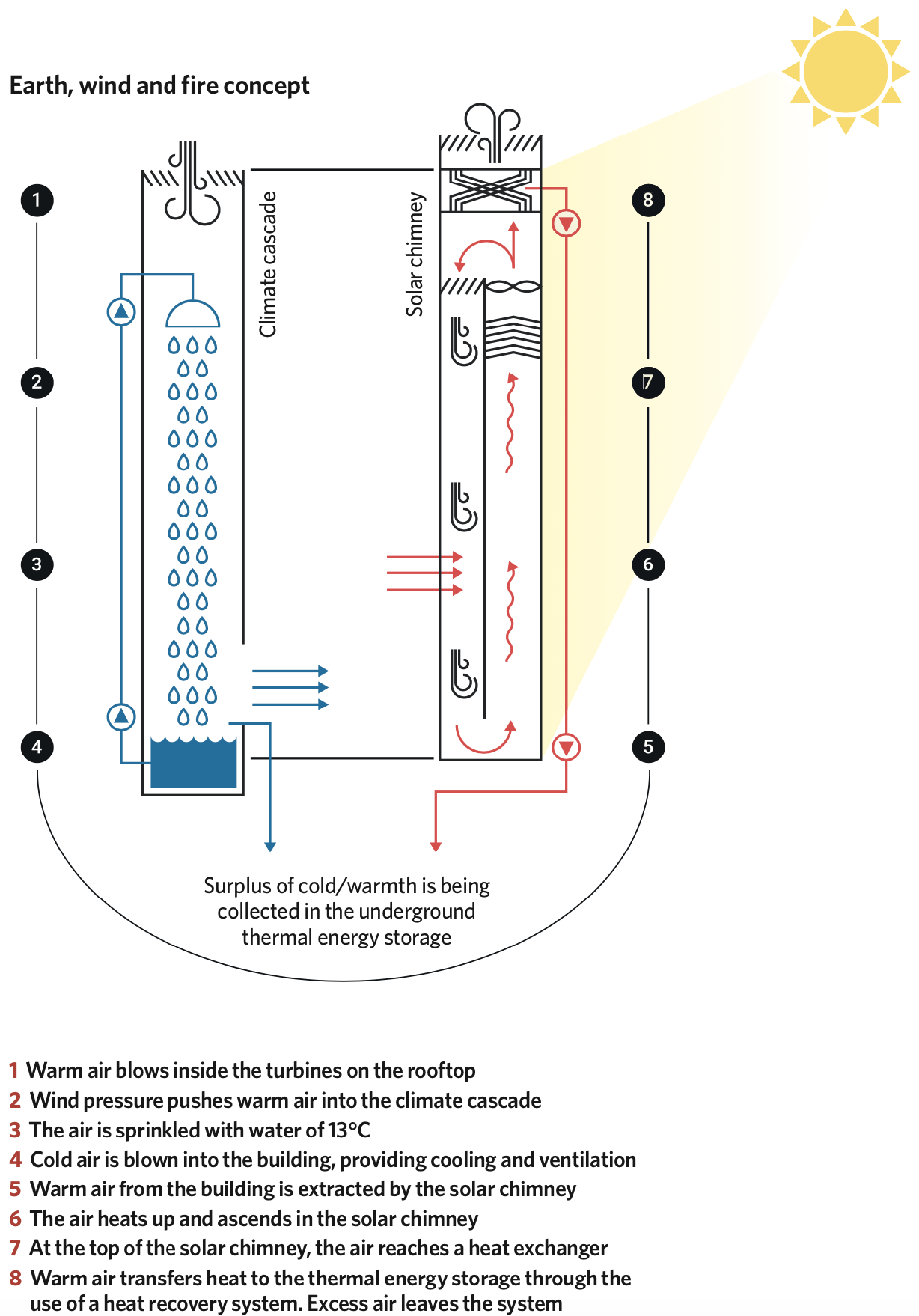 When the hotel opens its doors this summer, some of its more observant guests may notice the two glazed columns on the southwest façade, which rise from the ground floor to the roof of 33m-high building. These are the solar chimneys that help drive the building’s natural air conditioning. In plan, each chimney measures 0.65m deep by 3.5m wide. The front and sides of each chimney are glazed to allow in sunlight, while the rear wall is formed of black PV panels mounted on insulation; these generate 18,000kWh of electricity annually.

Sunlight warms the air in the solar chimneys, causing it to rise at approximately 1.5m·s-1 until it reaches the roof. This creates an area of lower pressure at the base of the chimney, which Bronsema exploits to draw stale air from the building into the chimney.

At the top of the solar chimney, the warmed air – which can reach temperatures of up to 60°C – passes through a heat-recovery system to capture its heat before it is discharged into the atmosphere. The estimated total annual thermal energy yield of the twin solar chimneys is 101 MWh.

The captured heat is stored in water at a relatively low temperature. This water can be used to heat the building and domestic hot-water (DHW) supply directly, or indirectly via heat pumps, which will raise its temperature. There is a 10,000-litre DHW storage tank on the 10th floor of the hotel. The chimneys are so efficient that, on a sunny day, not all of the heat they produce is required by the hotel – so the captured heat is stored in the ground beneath the building, for use in heating the building in winter via a heat pump.

Fresh air to replace the air expelled by the solar chimney is drawn into the hotel at roof level, where it enters the ‘climate cascade’. This is a vertical shaft that drops down through the centre of the building – from the roof to the ground floor – where air for ventilation is cooled, heated, dried or humidified as needed, by nine water sprays fitted to the top of the shaft.

Water extracted from boreholes beneath the building is sprayed into the air at a relatively constant temperature of 13°C all year round. ‘The high heat-transfer coefficient of the falling water droplets – and the large active surface area of the millions of droplets in the spray – ensure the climate cascade can operate at very small temperature differences between air and water,’ says Bronsema, who describes the climate cascade as a ‘gravity-activated heat exchanger’.

In summer, the water sprays can cool the outside air from 28°C to 18°C. As it cools, it sinks to the base of the shaft, and the downward movement of air is reinforced by momentum transfer from the water droplets to the air. Spraying the air with water also has the effect of scrubbing particulates from the air, thereby cleaning it. ‘This aerodynamic pressure, together with the hydraulic pressure and the downward thermal draft, makes fans superfluous,’ explains Bronsema.

As the cooled air sinks, the pressure increases at the foot of the cascade, which Bronsema uses to move the cooled fresh air into the rooms. 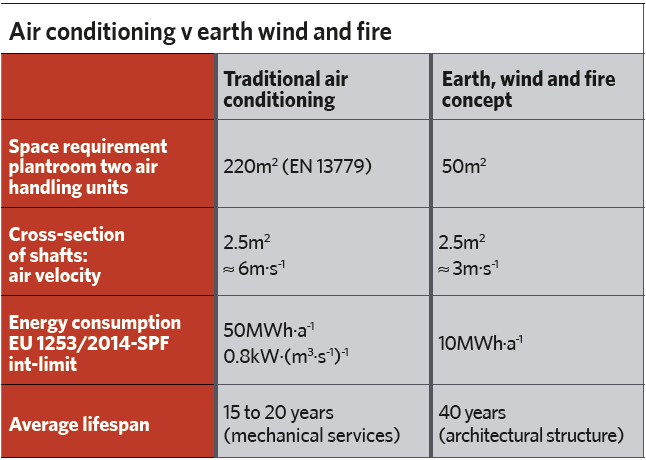 In winter, the water sprays are relatively warm to humidify the supply air. A heater battery is installed at the base of the cascade, which raises the temperature of the air for supply to the rooms.

‘The injection water temperature is 13°C throughout the year; in summer, this produces cooling and, in winter, it heats the air and humidifies it,’ says Ronald van Luijk, principal of Green Building Engineering. The spray water is collected at the base of the climate cascade and pumped through a water-treatment installation for reuse.

The climate cascade and solar chimney generate only a modest pressure difference to move the ventilation air, which means the air ducts must have larger dimensions than a traditional mechanical air conditioning system to minimise the pressure drop in the system. ‘Both the supply and exhaust systems are fitted with axial fans to assist the airflow when necessary,’ says Van Luijk.

The system whereby air is drawn into the hotel via the climate cascade and expelled via the solar chimney enables all rooms and communal areas to be ventilated by natural means, without the need for mechanical ventilation. Fresh air is supplied to each of the guest rooms through a system of large ducts to minimise the pressure drops.

‘The ducting is designed as big as possible to reduce pressure loss, with the air introduced to each room through a constant volume valve,’ explains Van Luijk. A fan coil unit enables guests to control the temperature and airflow rate in their room. ‘When guests leave their room, the conditions revert to an energy-saving condition,’ he adds.

According to Bronsema, his system ensures that nature ‘inhabits’ the building by architectural means – and because the building design is fundamental to the success of the natural air conditioning concept, the engineer and architect have to work together from the outset. ‘It is the architect who shapes the design of the building as ‘climate machine,’ he says.

Minimal energy is used by the natural air conditioning system, and the biggest energy consumer is the pump that delivers the borehole water to the spray heads at the top of the climate cascade. The system can be made more energy efficient by turning off the sprays when the outside temperature or relative humidity allows. ‘We only need one small pump to pump water to the sprays,’ says Bronsema.

‘With a hotel concept such as this, we had to design a very efficient and realistic building based on a good, compact floor plan, to enable maximum investment in all of the alternative energy systems,’ says the project’s architect, Wouter Zaaijer, director
at architect office OZ.

The building is designed to be almost energy self-sufficient. While the natural air conditioning system uses very little energy, other systems that keep guests comfortable and fed do use energy, supplied, predominantly by electricity generated by photovoltaic (PV) panels. In fact, the hotel is clad almost entirely in PV panels; the roof and all of the walls – with the exception of the north-east elevation – are covered in PVs, and even the canopy that projects from the front of the building has them.

In the climate cascade, air for ventilation is cooled, heated, dried or humidified as needed, by nine water sprays

The electricity produced by the panels is in addition to the electricity produced by the PVs that line the solar chimneys. ‘We had to design a hotel to fit into the urban scheme, which produces a lot of energy – almost as much energy as we are using,’ says Zaaijer, who describes PVs as ‘not the nicest façade material’. So OZ worked with the glass industry to develop a silver/black panel glass to form the PV cladding panels.

‘These are overlapped slightly to help break up the flat expanse of cladding, so we don’t have a strong, hard, blue shiny building, but a nice inviting hotel,’ says Zaaijer.

To maximise the area available for energy production, the window sizes have been kept to an optimal position. The main façade faces mostly south-east. ‘We did not want the windows to be too wide, but we wanted guests to have a pleasant view out, so we designed the windows vertical – high to the ceiling to let in maximum daylight and low enough to enable guests to let them make a connection to the plaza,’ says Zaaijer.

The ‘earth, wind and fire’ concept is suitable for most new buildings, as long as the influence of wind and sun is not impeded by the surrounding buildings – the solar chimney, for example, should not be shaded by other buildings or vegetation.

Bronsema and his colleagues at Delft University of Technology have put together a virtual case study on an existing building, and the results were encouraging. They found that the earth, wind and fire concept could reduce the energy consumed by air conditioning systems by 40-60%, with the remainder of the demand met from a roof-mounted wind and solar power plant.

The costs of using the system were similar to a conventionally air conditioned hotel, if the costs of the solar chimneys were not included.

Breeze Hotel is set to open this summer –although perhaps it should be September, in honour of Earth Wind & Fire’s greatest hit. 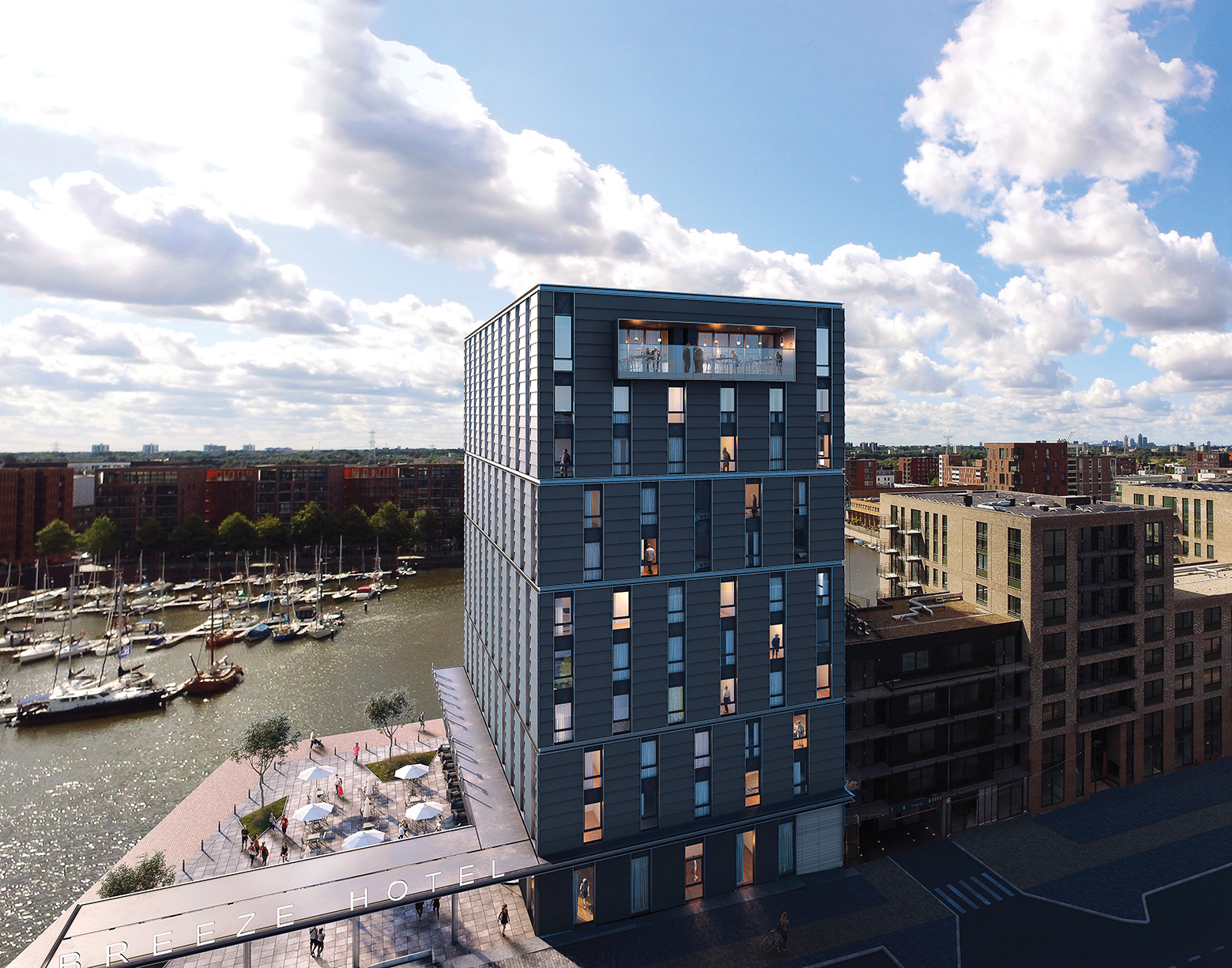