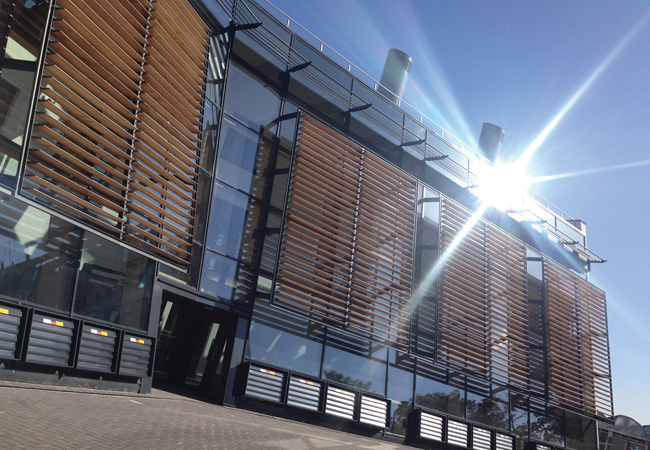 he University of Bradford has made CIBSE Awards history after being named Building Performance Champion for the second time at this year’s CIBSE Building Performance Awards. Its department of estates and facilities won plaudits from the judges for its transformational work on the institution’s ageing estates infrastructure over the past decade, resulting in its carbon footprint being reduced by 35%. 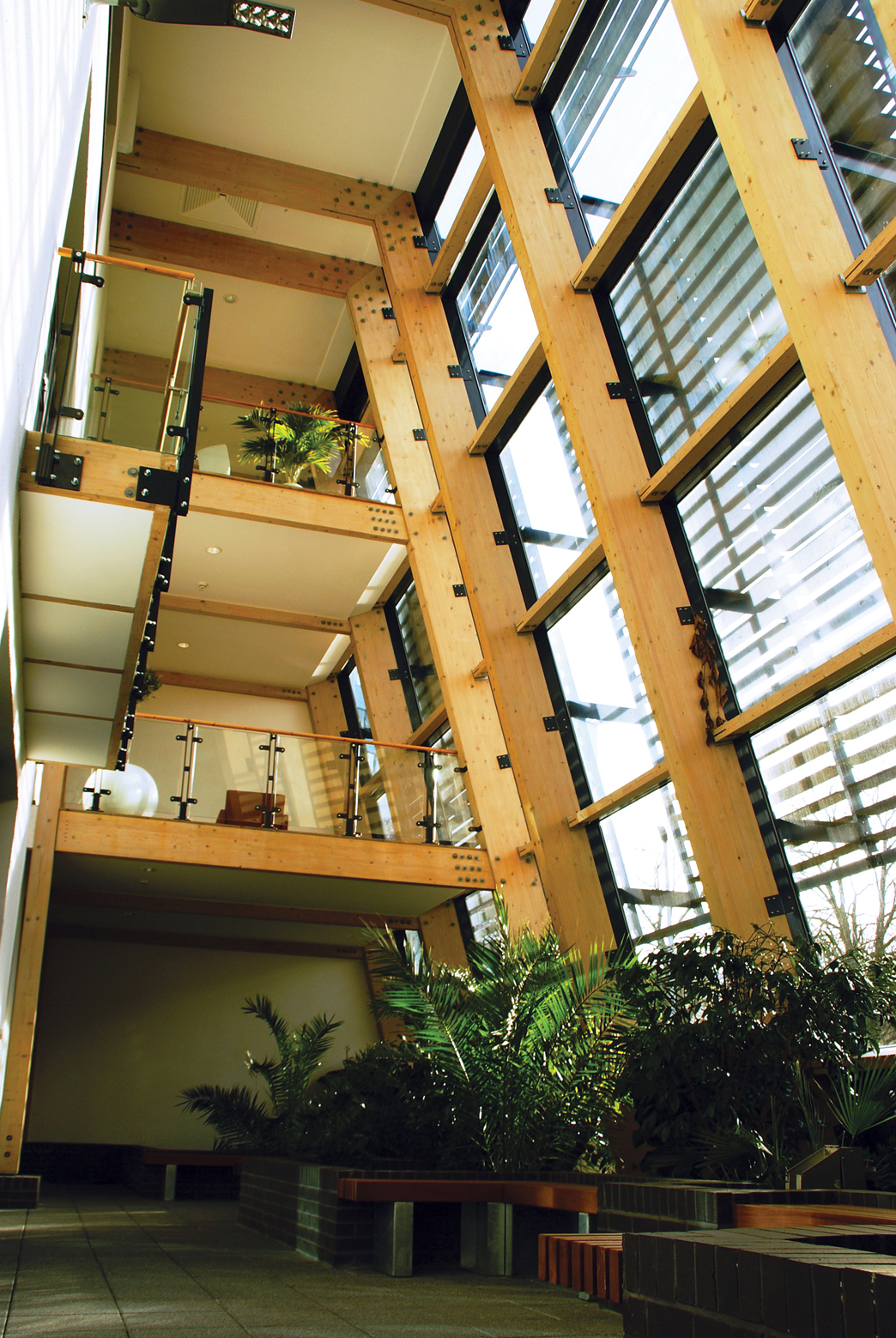 The university’s estates and facilities team first won the Champion accolade in 2012, for achieving an 8% reduction in emissions from its estate, and for the work the estates team had done to bring about change through its involvement in the institute’s Ecoversity programme.  In 2006, the department had set out how it planned to regenerate the university’s estate, and how it would work with students and staff to achieve a 50% reduction in direct emissions from gas and oil use, and electricity consumption, by 2020.

‘Nothing fundamental has changed since 2012 – we’ve just carried on trying to save carbon,’ says Russell Smith, head of estates at the university. What has changed, though, is the rationale for the ongoing work. ‘Previously, we were driven by the green agenda and Ecoversity; now, our energy-saving work is driven by ensuring security of energy supply – and electricity in particular – in light of predicted volatile utility prices with the closure of coal-fired and nuclear power stations,’ Smith explains.

He says the university has already suffered several power losses and ‘brownouts’. ‘If we lose power during the admissions clearing period, the university could lose £30m or £40m in revenue,’ says Smith, who adds that the ultimate aim is to take the university off the power grid. ‘The key is taking control of your own destiny.’

The off-grid business case is not simply about security of supply, however – it is also about ‘the creation of a revenue stream by having the capability to export energy to the grid’, says Smith. The goal is for the university to become a net exporter of energy, rather than an importer, and for its estate literally to generate money for the institution. ‘We’re moving towards that at the moment,’ says Smith, ‘In the winter evenings, and at weekends, we export electricity to the grid from our CHP.’ 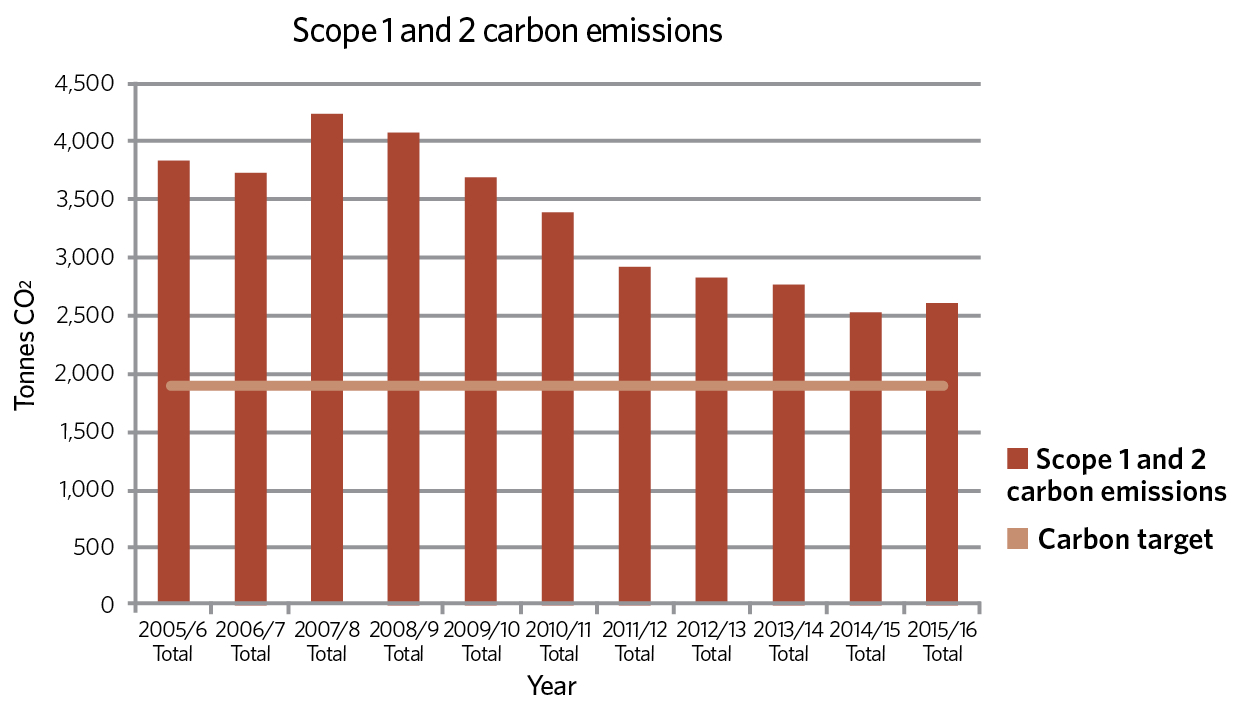 The next step in the university’s preparations for moving off-grid is the ‘micro smart grid’, currently under construction. This electricity and heat grid will connect four major buildings on the main City Campus – including the library and the student building – with a micro-combined heat and power (CHP) system. Backing for the project – set to go live this month – includes £1.9m from the Higher Education Funding Council for England/Salix Revolving Green Fund 4. 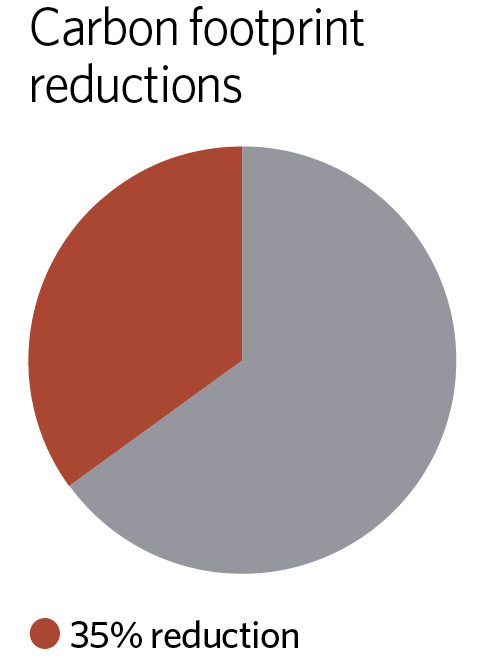 The business case for the micro-CHP means that it will be used to generate electricity for export when it is demanded by the grid, and not necessarily when there is a high demand for heat from the CHP engine. ‘The CHP will be fitted with dry coolers to reject heat,’ says Smith, who adds that the business case is the same for the main CHP, to which the facilities team is looking to fit big dry coolers for the same reason.

Alongside the option of exporting surplus electricity, the team is also investigating the possibility of battery storage. The favoured option is for the batteries to be supplied under an energy service company (ESCo) arrangement. According to Smith, battery storage ‘will help take the university off the grid’; with the batteries in place, the grid would only be used as backup to run the CHP, which would otherwise operate in what is referred to as ‘black-start’ mode.

A key part of the university’s security of supply initiative is the ongoing drive to reduce its demand for energy. ‘We still abide by the “fabric first” mantra and our mission statement of “save before you generate”,’ says Smith.

The University of Bradford comprises 28 buildings – with a total floor area of 124,000m2 – split between two campuses, with the majority located on City Campus. Most of the buildings were built between 1964 and 1977, when building performance and energy efficiency were not major considerations, and feature warm-air heating, single glazing and poor levels of fabric insulation. In 2014/15, the ‘fabric first’ approach resulted in the estates team over-cladding two 1960s buildings – one a 13-storey block, the other a three-storey workshop facility. 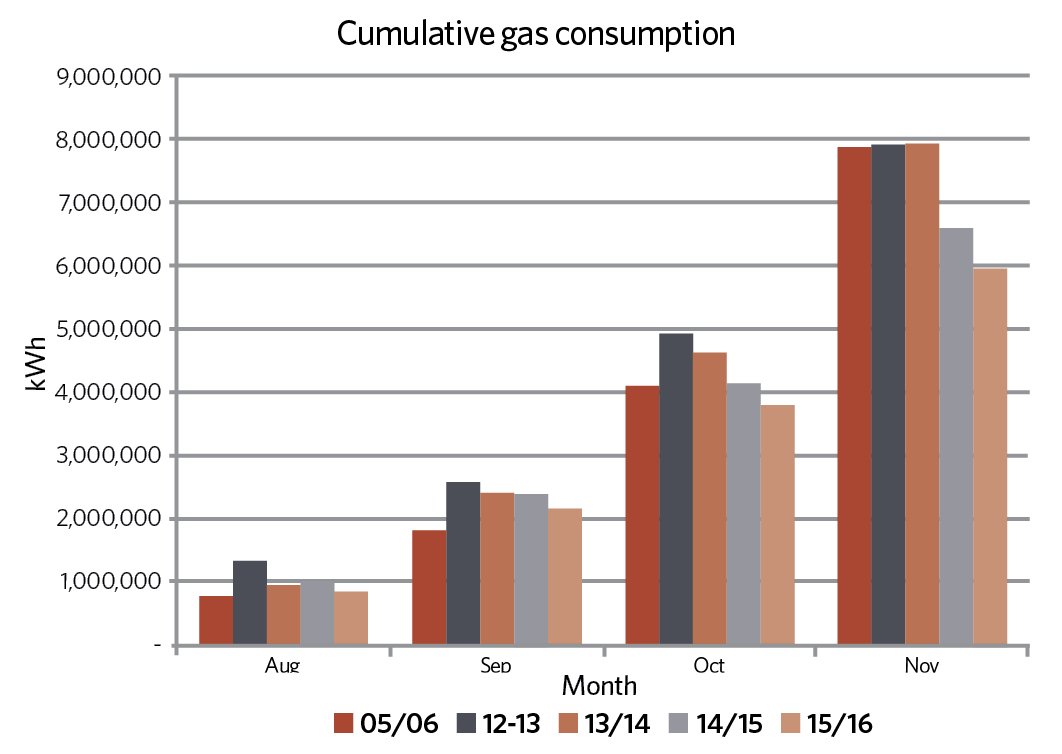 ‘We are proud of our achievements in reducing our carbon emissions and reducing our utility costs by 27% in a [energy] market that has risen by 90% over the 10 years that we have been running this initiative, accruing an aggregated saving of £8m over the business-as-usual figure,’ says Smith, (See box-out ‘Rolling programmes run by the university to address estate legacy issues’).

The facilities team works closely with building users to understand how they need them to operate, so the performance can be optimised. ‘This can be challenging at times because of the diverse nature of the university’s business and wide range of demands,’ says Smith. ‘Managing users’ expectations – and getting them to appreciate how their environment works – can be extremely challenging, and
often requires early engagement and a face-to-face explanation, in non-technical speak.’ 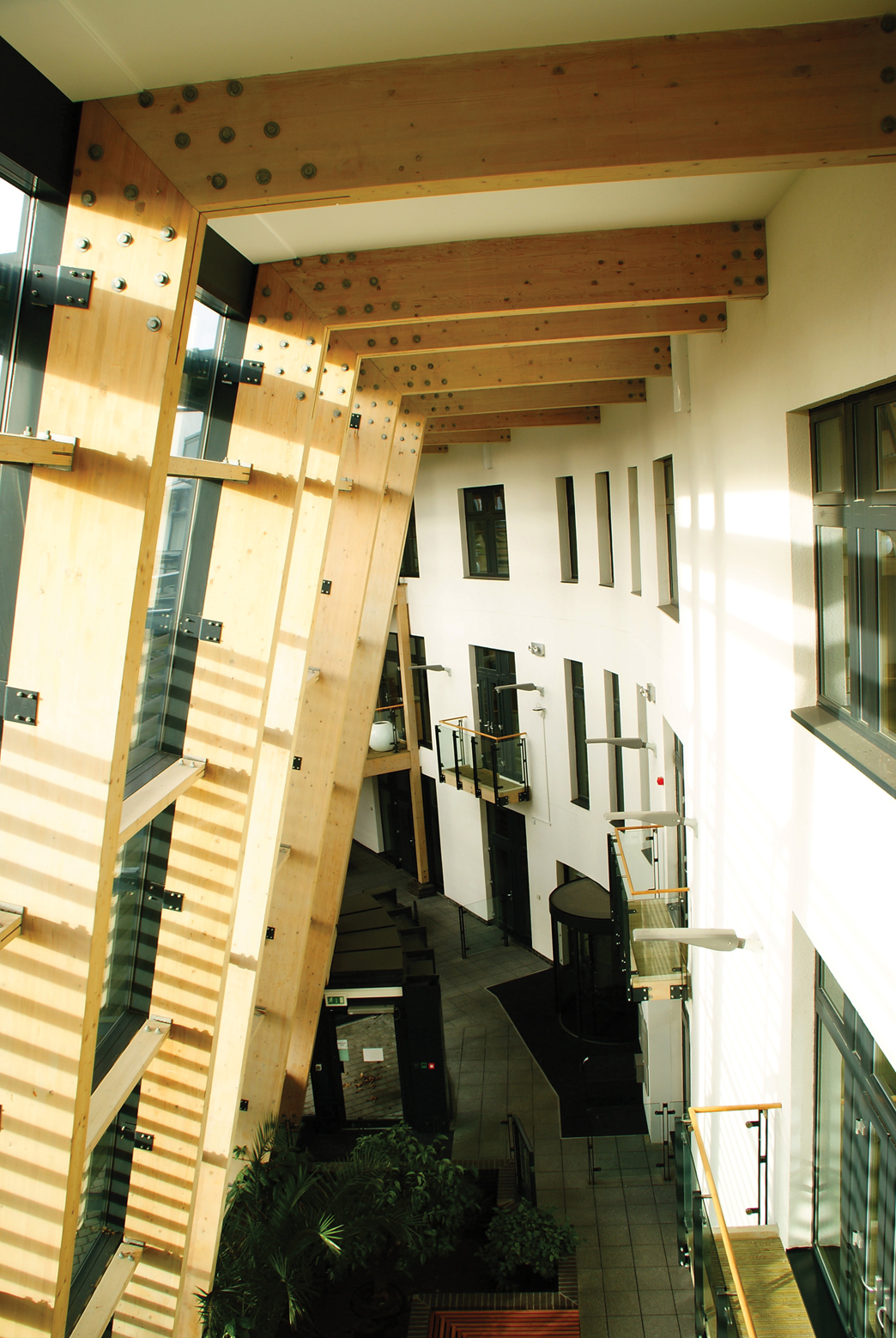 To make it easier for the team to keep all of the buildings running efficiently, the university has moved its site-wide Trend BEMS to a server-based operation. This allows any member of the team to access the BEMS from either a handheld device or through a desk-based PC.

‘We have a strategy where we operate the BEMS in conjunction with a web-based, real-time circuit by metering a number of our fume cupboards and other high-energy plant, as well as small power and lighting equipment across the estate,’ explains Smith. ‘This allows us very quickly to identify, and act on, anomalous use, as well as to see if equipment is being operated correctly, and to advise the users if it is an operational issue,’ he says.

The facilities team works particularly closely with the Students’ Union, to ensure it groups together out-of-hours activities in areas that have discrete heating and ventilation systems and controls, rather than heat numerous buildings.

In addition to managing the university’s estate, the facilities team engages with the academic staff so the estate can be used as a teaching tool, particularly for students’ final-year dissertations. Engagement is usually through access to the BMS and metering data.

Members of the facilities team also give an annual lecture outlining their work to first-year engineering students as part of their sustainability module.

Smith says it has taken a massive team effort to achieve the accomplishments to date. ‘Since our [CIBSE Awards] success in 2012, we believe our achievements are all the more impressive in terms of carbon reduction and building performance improvements because we harvested all the low-hanging fruit at the project’s outset.’

The JB Priestley Library – with a Band E Display Energy Certificate (DEC) rating – was one of the most inefficient buildings yet to be revamped on the University of Bradford’s campus.  The estates team evaluated refurbishing the 22,000m2 building, constructed in 1973, to bring it up to a DEC ‘A’ rating and compared that to the cost of demolishing the library and rebuilding. It estimated that refurbishment could deliver the same level of performance as a new building, but at a fraction of the time and cost.

To improve the library’s thermal performance, the estates team insulated the building fabric with three times the insulation thickness required under Building Regulations. It also sealed the building to Passivhaus benchmarks, to prevent draughts and uncontrolled ventilation in line with the standard’s ‘fabric first’ mantra. Improvements to the fabric insulation reduced the building’s demand for heat, which – in turn – reduced the size and cost of the replacement heating system. The new system includes a biomass boiler and a 600m2 solar PV array – installed after the crash in the price of solar PV following the withdrawal of the commercial feed-in tariff (FiT) – in place of the life-expired gas boilers.

A new central atrium was punched through the building to facilitate natural ventilation to the top two floors and to allow daylight deep into the interior. The interior was designed with workspaces close to the windows and the atrium, to allow students to take advantage of increased daylight levels. Bookshelves were also positioned to allow daylight into the spaces.

In an annex to the library is the principal student social building, Student Central. Here, a new mixed-mode ventilation system has been installed, controlled by the building energy management system (BEMS). Opening and closing of the building’s windows is also controlled by the BEMS. The atrium is used as a solar chimney; in summer, warmed air rises up and out of the building to allow cooler, fresher air to be drawn in at low level. Internal temperature fluctuations are moderated by the thermal mass contained within the building’s core. When internal temperatures exceed 28°C, the BEMS closes the windows and switches to a mechanical ventilation system.

The project is metered extensively and the data used to plot actual performance against expected performance. This enables the facilities team to understand when and why differences occur. Significant deviations from the expected energy consumption will result in a visit to the site and/or interrogation of the BEMS to identify the cause.

The refurbishment has improved the library’s energy performance dramatically. Results show a decrease in gas consumption of 55% and a reduction in electricity consumption of 18%.

The initial refurbishment was assessed as DEC ‘B’. However, lighting controls and solar PV have since been installed and – after further work by the estates department to understand the plant operation and fine-tune the building – the scheme achieved its target DEC ‘A’ rating in 2015.

Having achieved the ‘double double’ of awards wins, the facilities team is continuing its mission to drive down energy consumption at the university. It has launched the Bradford: 50@50 initiative – to celebrate the university’s 50th anniversary this year – and has set itself the ambitious target of achieving the 50% carbon emissions reduction by August of this year.

‘Currently, we are at a 41% reduction, but we are expecting the micro smart grid to have a big impact – so it will be agonisingly close as to whether or not we achieve this target,’ Smith says. ‘If we don’t get to 50% this year, we’ll certainly get to it early next year.’