The ChapmanBDSP team on their away day to 100 Liverpool Street

We celebrate our achievements, rewarding our team for their great work and fostering an environment of support, praise, and recognition,’ says ChapmanBDSP’s entry to the 2021 CIBSE Young Engineers Awards, where the consultant won CIBSE Employer of the Year.

So what better way to foster a collaborative and celebratory environment than a team visit to one of the consultant’s more recent successes, British Land’s 100 Liverpool Street, where ChapmanBDSP was responsible for the MEP and environmental design of the developer’s first net zero carbon building.

The morale-boosting visit was the first outing the consultant’s London office staff had been on since the outset of the Covid-19 pandemic, and coincided with the 50th year anniversary of the practice.

In addition to its net zero status, 100 Liverpool Street has also been awarded Breeam ‘Outstanding’ and Well ‘Gold’ Certification, making it one of the most sustainable office projects in the UK. ChapmanBDSP’s visit took place in the month the scheme received additional recognition with a Civic Trust Award for its contribution to the built environment. 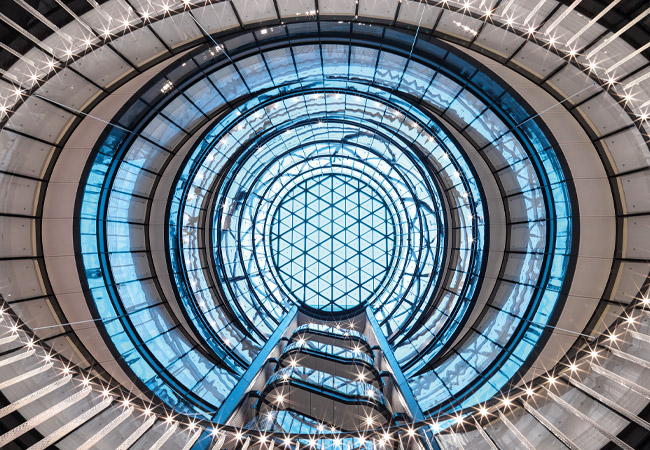 The atrium is the focal point of the building

Impressively, the building’s net zero carbon status is largely the result of engineering excellence rather than the design team’s slavish pursuit of net zero goals from the outset. ‘We set out to achieve the client’s brief by ensuring we could deliver sufficient heating, cooling and electrical capacity with an energy efficient design that incorporated the best, energy efficient equipment,’ says Rudolph Duncan-Bosu, ChapmanBDSP’s project director.

‘As a consequence of doing the fundamentals well, combined with an energy efficient and airtight façade, when we did run the energy numbers it showed that the scheme could realistically aim for carbon zero,’ he adds.

100 Liverpool Street is a new building with retained structure. The original seven-storey 1980s building, adjacent to London’s Liverpool Street Station, was designed by Arup Associates. It had deep floor plates to accommodate businesses with dealer floors at the time of the stock market Big Bang.

Hopkins Architects’ design set out to rebuild and extend this major development to create more than 48,000m2 of modern, flexible, multi-tenanted office space with the addition of three new floors of offices, and the creation of an atrium and new retail space.

The atrium is the focal point of the building; it effectively divides the floor plates into north and south zones. The floor plates can be further subdivided to allow each level to be occupied by up to four separately metered tenancies. In addition, in a nod to its original inception, Levels 2 and 3 have been designed with additional cooling capacity to allow their use as trading floors. 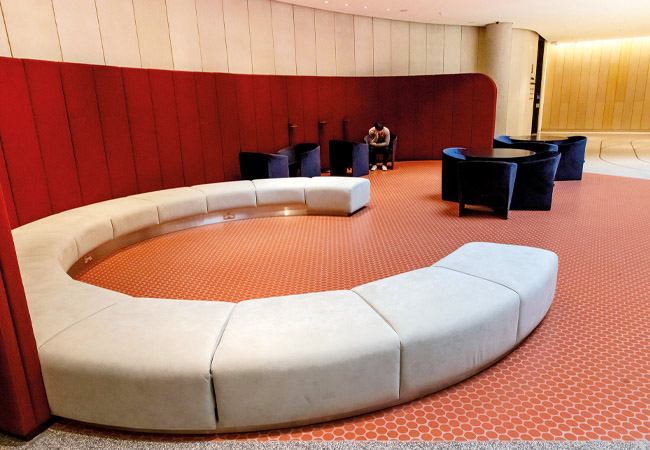 Hopkins’ design retains the building’s existing foundations and a large proportion of the existing steelwork. It was a decision that helped reduce the embodied carbon in the fabric of the new building, while allowing Network Rail’s ground floor retail spaces to continue trading throughout the building’s reincarnation.

While the retained structure had both carbon and logistical benefits, the decision to retain elements of the structure had a major impact on ChapmanBDSP’s servicing strategy for the refurbishment.

Unfortunately, the floor-to-ceiling heights of the retained basement were too low to enable the space to accommodate the bulk of the building services plant. ‘We were limited in terms of what we could slot into the basement, which resulted in us having to put most of our plant on the roof,’ says Duncan-Bosu.

This top-down servicing strategy did, however, have the additional benefit for British Land in maximising retail and restaurant space on the ground and lower ground floors.

The precise location of plant on the roof was influenced by its future removal and replacement. There are two main plant areas on the building’s roof: chilled water and electrical plant is confined to the north plant area, heating plant is to the south.

As part of its design, ChapmanBSDP had to demonstrate that plant could be removed when it was time for it to be upgraded. ‘While you can place the equipment on the roof using tower cranes while the scheme is being built, getting it off for replacement was tricky, because the underground lines and station infrastructure beneath the site limited the areas in which a heavy mobile crane could operate,’ Duncan-Bosu explains. 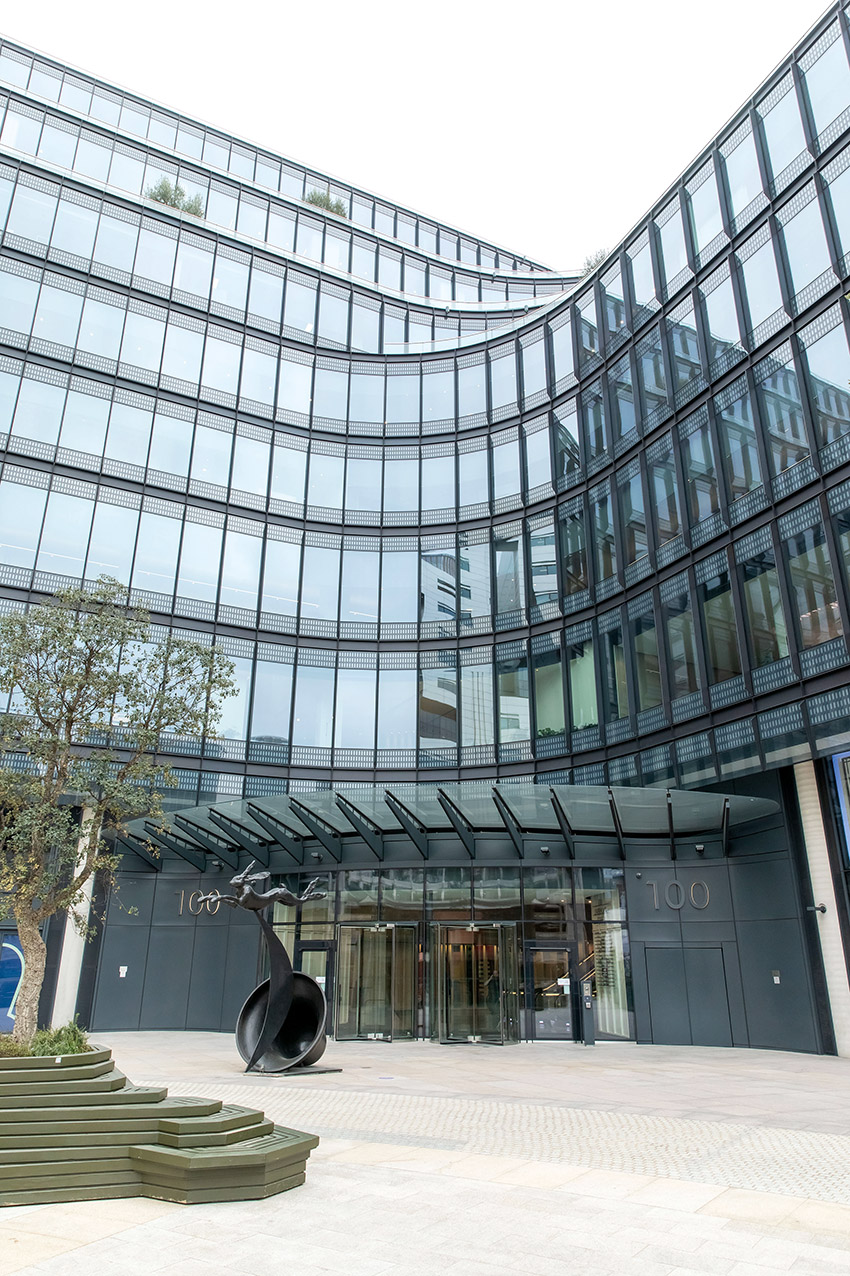 While the southern plant area was fully crane accessible from the nearby road, only part of the northern plant area could be accessed. This meant that any plant that could not be manoeuvred to the crane-accessible area had to be capable of being broken down for removal by the goods lift. ‘We used the BIM model to demonstrate that plant could be manoeuvred around the roof for removal,’ says Duncan-Bosu.

The chilled water plant was not modularised. The roof houses six air-cooled chillers. To save energy, ChapmanBDSP has designed a heat reclaim loop to collect heat from the heat rejection side of the chillers which is then used to preheat the landlord’s domestic hot water feed in a dedicated pre-heat cylinder.

An advantage of ChapmanBDSP’s top-down servicing approach was that ducts and pipes were smaller at the base of the building compared with roof level. This enabled the existing risers that pass through the Network Rail ground floor retail to be reused to service the retail at ground and lower ground.

One of the benefits of this common approach to the provision of heating and cooling is that it will enable the scheme to be decarbonised more easily in the future. ‘One of the things we looked at was the potential for connection to an energy network,’ explains Duncan-Bosu. ‘We’ve made provision to bring in external services and we’ve provided plant space for heat exchangers on both heating and cooling systems should a network become available,’ he adds. 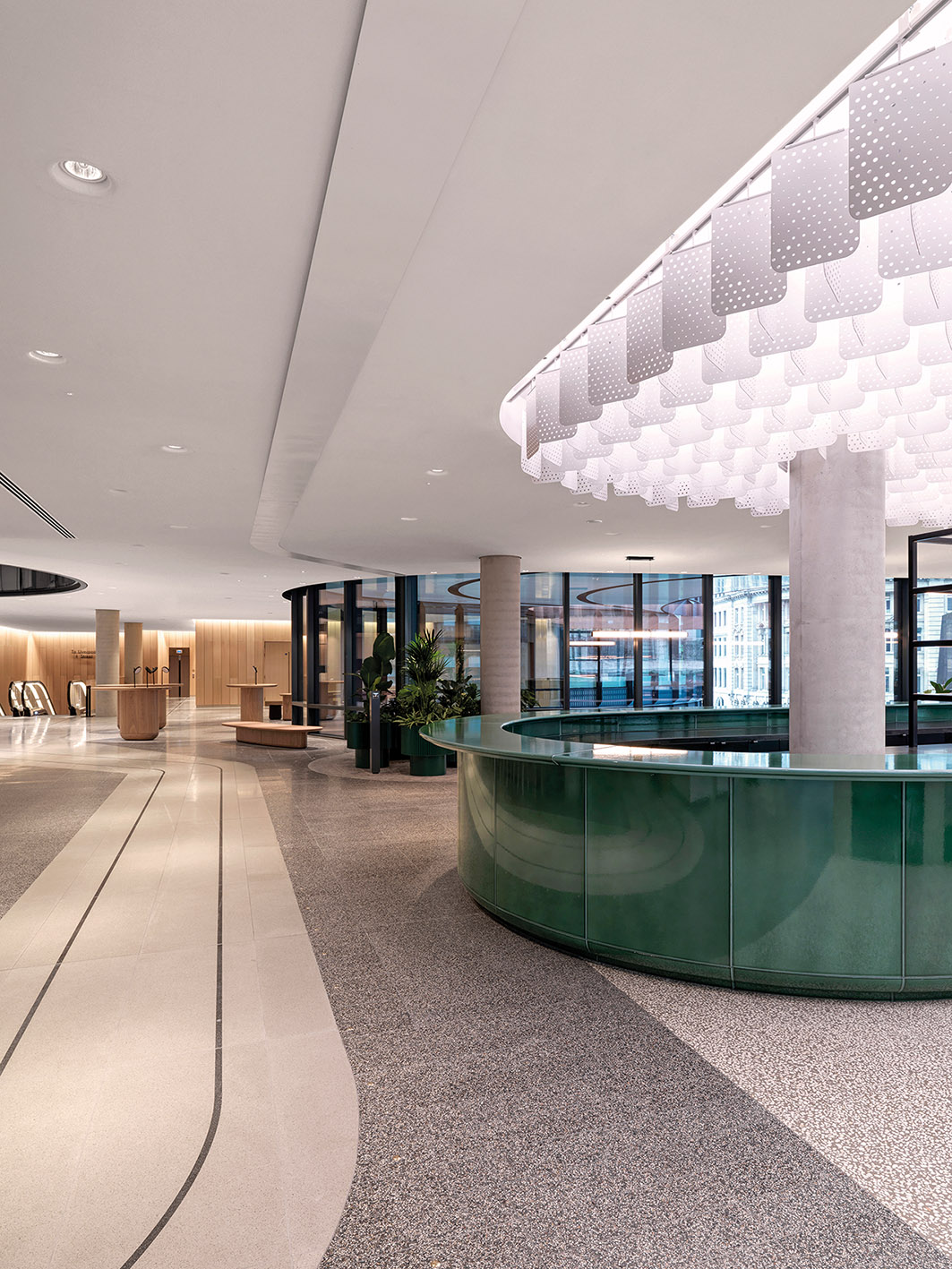 The building services for the office floors are designed on the basis that the building was to be let on a shell and core basis, with tenants undertaking their own fit-out. In discussion with British Land, ChapmanBDSP sized the central plant on the basis that most tenants will opt to use a fan coil system.

The design assumes four-pipe units are located around the building’s perimeter, with two-pipe cooling only units serving the remainder of the floor plates. ‘We’ve influenced the tenants a little bit by guiding them on the energy rating of the fan coil units to ensure the building sits within certain parameters to achieve the overall EPC for the building,’ says Duncan-Bosu.

Another area of discussion with British Land was on both air quality and quantity. ChapmanBDSP had monitored the site externally. ‘The air quality was not great, so the client made the decision to install carbon filtration on all roof-top air handling units, which has helped improve air quality,’ Duncan-Bosu says. 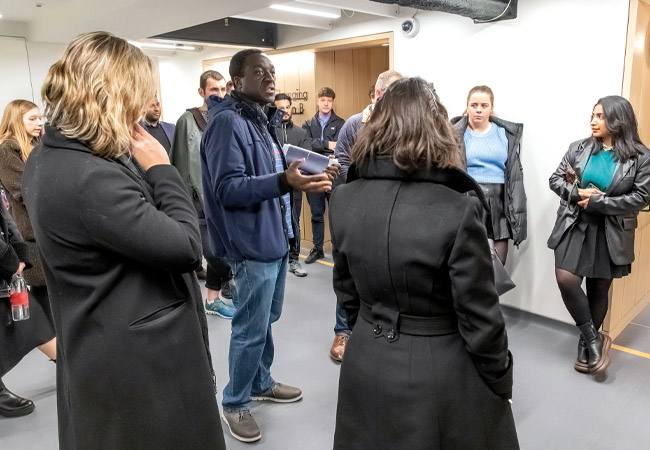 In terms of air quantity: the design was initially developed to comply with the British Council for Offices (BCO) requirement of 12L·s-1 per person. However, as the design progressed, the air supply rate was increased to 16L·s-1 per person to further enhance the air quality and meet the requirements of the Well Certification. ‘At 2L·s-1·m-2, it’s a higher airflow rate than the Building Regulations and the upper limit of the BCO guidance,’ says Duncan-Bosu. Air supply to each floor plate has the ability to be regulated using variable volume control based on the CO2 levels from the office space.

The air quality was not great, so the client made the decision to install carbon filtration on all roof-top air handling units, which has helped improve air quality

The building’s eco-credentials also include greywater recycling and rainwater storage for toilet flushing. Waste water is collected from the showers and wash hand basins, which is then filtered and stored for use in flushing toilets.

Rainwater storage tanks are in the basement. The tanks’ primary purpose is for rainwater attenuation. Limitations on plant space meant that there was insufficient room to have a large amount of storage. Instead, the rainwater system controls monitor the weather forecast. If heavy rainfall is predicted, the tanks will be emptied to enable rainwater to be stored to provide attenuation. 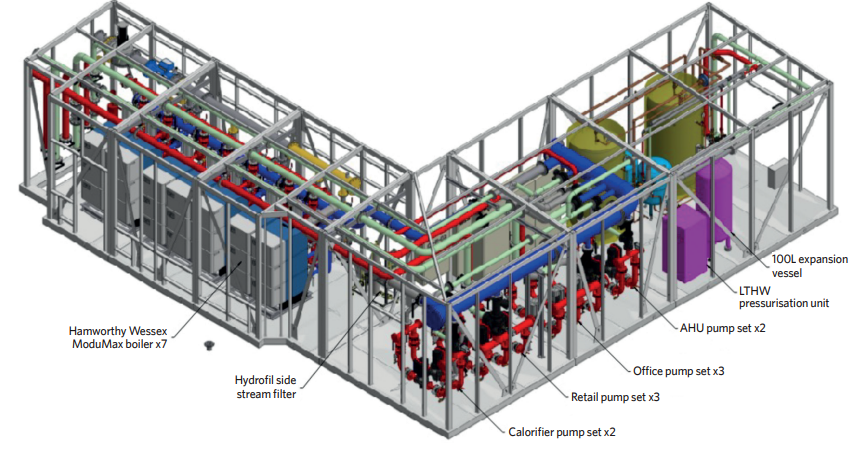 In accordance with its green credentials, the building’s electricity is purchased from renewable sources. There is also a small contribution from an area of photovoltaic panels on the building’s roof.

British Land has offset the remainder of the residual embodied carbon split equally between a project restoring 30,000 hectares of land on the Tibetan plateau and a teak afforestation project in Mexico to make this building British Land’s first net zero carbon development.

ChapmanBDSP CIBSE Employer of the Year

ChapmanBDSP is an independent design consultancy specialising in MEP, environmental, fire, vertical transportation and lighting. It employs around 200 people, of which 157 are building services engineers, 40 of which are graduate and/or junior level engineers.

The initiatives it has put in place to develop young engineers include:

In 2021, the company’s focus was on supporting the mental health of its employees, including running mental health and mindfulness sessions on Microsoft Teams to help employees with their mental health during the Covid-19 pandemic.

A young engineer’s endorsement of the company’s award entry included the following:

‘The company are very supportive and encourage all young engineers to attend industry training events that are organised by professional membership bodies such as the CIBSE and SoPHE YEN.

‘The senior engineers are very willing to assist the young engineers wherever possible. Whether this be in the form of helping us with our university studies; assisting us with our design work in the office; or taking us down to site and showing us around.’

As part of its Wellbeing Strategy, the company has invested in 10 Mental Health First Aiders (MHFA), with a representative in each of the design teams. All the MHFA have completed the two-day Mental Health in the Workplace course, which is aimed at empowering businesses to create a positive environment where people can discuss mental health.

The company recognises that its biggest asset is the staff they have working for them and are willing to listen to all employees, which was evident from the results of the recent company-wide investors in people survey on Covid-19 and Wellbeing, in which the company scored in the top 5% for positivity