While there is considerable enthusiasm for large-scale water source heat pumps for new-build projects, they aren’t always considered as suitable for retrofit buildings with traditional secondary side heating systems. With correct design, however, they are an intelligent solution for most projects or – as in the case of the Queens Quay project, commissioned by West Dunbartonshire Council – a mixture of new-build and retrofit connections.

The Queens Quay energy solution has two 2.65MW ammonia water source heat pumps, built by Star Refrigeration, and a 130m3 thermal store at the heart of the low carbon system. This provides around 80% of the 51,000MWh annual heat demand, with the remainder supplied by backup, gas-fired boilers. There is also scope for two heat pumps to be added as the build out progresses and the heat demand increases.

The colourfully lit chimney contains the heat pump ventilation system and includes the emergency ammonia purge system, which ensures there is adequate dispersion and no impact on locals in the event of a leak. Three boiler flues also terminate in the chimney.

A riverwater abstraction system has been installed at the Queens Quay Basin, which takes water from the river Clyde and circulates it through the heat pumps, before returning it to the river, with a stipulation that it cannot be returned more than 3K cooler than its original abstraction temperature.

The heat pump converts the latent heat from the river into low-temperature hot water, which is distributed via a 1.5km district heat network serving the 23-hectare development. It will eventually serve 1,200 homes, and the associated infrastructure needed to support them, such as health centres and commercial facilities.

While the heat pumps were capable of supplying heat at 80°C+, there was strong motivation to lower the low-temperature hot water (LTHW) flow temperature as much as possible, because every 1K reduction resulted in an increased heat-pump efficiency of 1.5%. This created a dilemma for the designers, who would need to keep temperatures relatively high to meet the needs of the existing buildings, but low enough to get maximum efficiency from the pump.

Historical heating systems served by gas boilers operate on 82°C flow and 71°C return temperatures, meaning primary flow temperatures of up to 90°C are commonly used in district heating schemes to satisfy this requirement across a hydraulic break, such as a plate heat exchanger.

A detailed review of the existing systems concluded that these buildings can operate at 75°C flow and 60°C return, while new buildings have been designed to operate at 70°C and 45°C return. Weather compensation can reduce summertime temperatures for further efficiency benefits. 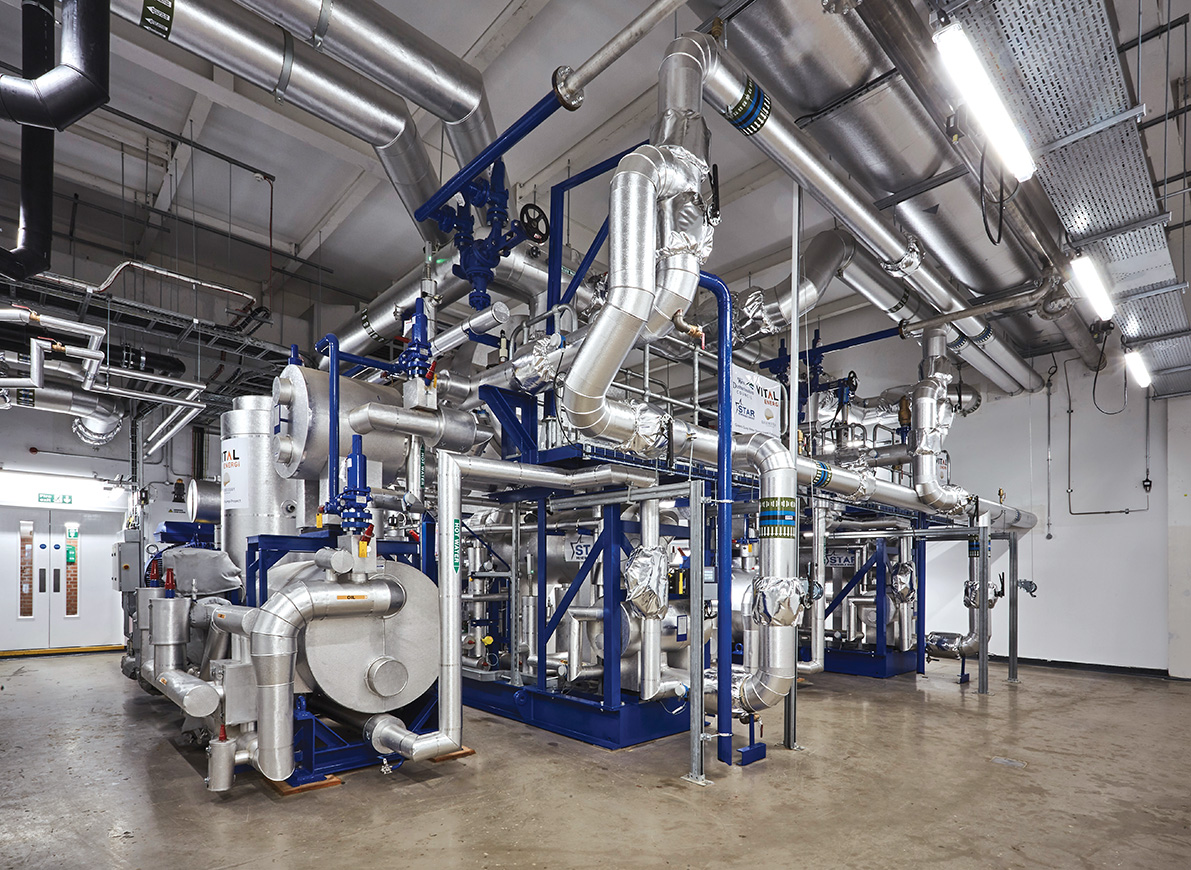 The flow temperature has to be high enough to meet the needs of the four retrofit buildings but, as these constitute 10% of the demand, they don’t influence the overall network distribution temperature too much and we can still prioritise overall system efficiency.

If the balance of loads tended towards a higher retrofit percentage, then the reciprocal would be true. However, reduction in temperature via weather compensation is important to ensure the system can satisfy the domestic hot-water production, as well as any specialist needs, such as healthcare pasteurisation.

With this blend of new-build and retrofit, our designers achieved a coefficient of performance of 3.1, making it considerably more efficient than traditional solutions, such as gas-fired boilers or combined heat and power.

Initially, the development had the following anchor-load buildings: the Aurora Building, Clydebank College, Titan, a leisure centre and the Queens Quay Care Home. It will create new-build properties, such as 1,200 homes, but there is an opportunity to incorporate significant existing building stock going forward.

Predicting the energy demands of a development is difficult, but necessary because it dictates the sizing of the plant, equipment and district energy network. For new-build connections, understanding the heat demand based on building designs is relatively straightforward – by looking at U-values, for example – but occupants can use energy in a variety of ways, which affects their annual energy demand and profile.

Energy data for existing buildings is seldom available in the granularity required to build detailed energy profiles, so calculations often incorporate experience to find a solution with inherent flexibility that can deal with all possible scenarios.

Understanding peak loads to size energy-centre plant is something all district energy designers must consider. The real challenge, however, is understanding the diverse energy profiles across the network to select the most appropriate water source heat pump and thermal storage, to achieve a significant heat fraction.

This means accurately predicting the energy demands for all connected buildings, plus the diversity across the network. Without these, the water source heat pump could have been sized incorrectly: too large and it would not operate efficiently; too small and the carbon savings would not be achieved.

Designing new buildings and properties to connect to a district energy system, which operates at lower temperatures, is relatively straightforward. Building Regulations have helped reduce the heat losses from buildings by improved U-values and lower infiltration rates – all of which means thermal comfort can be achieved with lower temperatures. 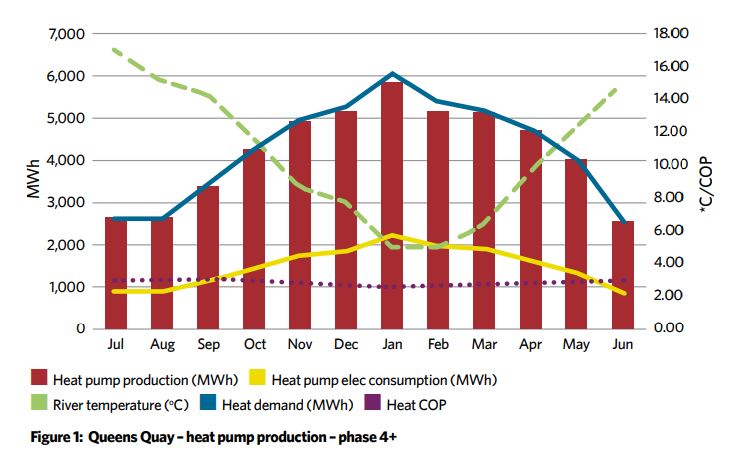 Connecting these buildings to a network with lower operating temperatures can only be done after a full evaluation of space-heating emitters – such as radiators, fan coil units and air handling unit coils – to ensure heat losses are achieved.

While it wasn’t necessary on the Queens Quay project, improvements to building fabric, such as insulation and replacing single-glazed windows with double-glazed ones, can help with reducing heat losses and is often a sensible place to start.

Often, older LTHW systems have constant-volume pumps controlled via 3-port valves. This can lead to high return temperatures to the energy centre and to the system not performing as designed, or turning off. This, in turn, can result in increased network losses and higher contribution from gas-fired boilers.

Converting these 3-port systems to 2-port ones, employing pressure independent control valves, ensures good control and low return temperatures, although there will generally need to be a change in pump-control philosophy, from constant volume to variable volume, often requiring the introduction of inverters to all pumps.

However, commercial and healthcare buildings have different temperature requirements and these influence the minimum network temperatures. This is particularly applicable to the summer operating condition, ie the minimum weather compensated temperature.

Many traditional heat interface units (HIUs) do not have the ability to operate efficiently at lower temperatures. While the Queens Quay development would have flow temperatures of up to 80°C, this would be a rarity, and in the warmer summer months – when there is little heating demand – it would be dropped as low as 60°C.

To deliver efficiency over these parameters, it was necessary to design a heat pump-ready HIU, with an intelligent core, that could monitor the changes in flow temperature and the domestic hot-water temperature, and compensate to ensure optimum performance. 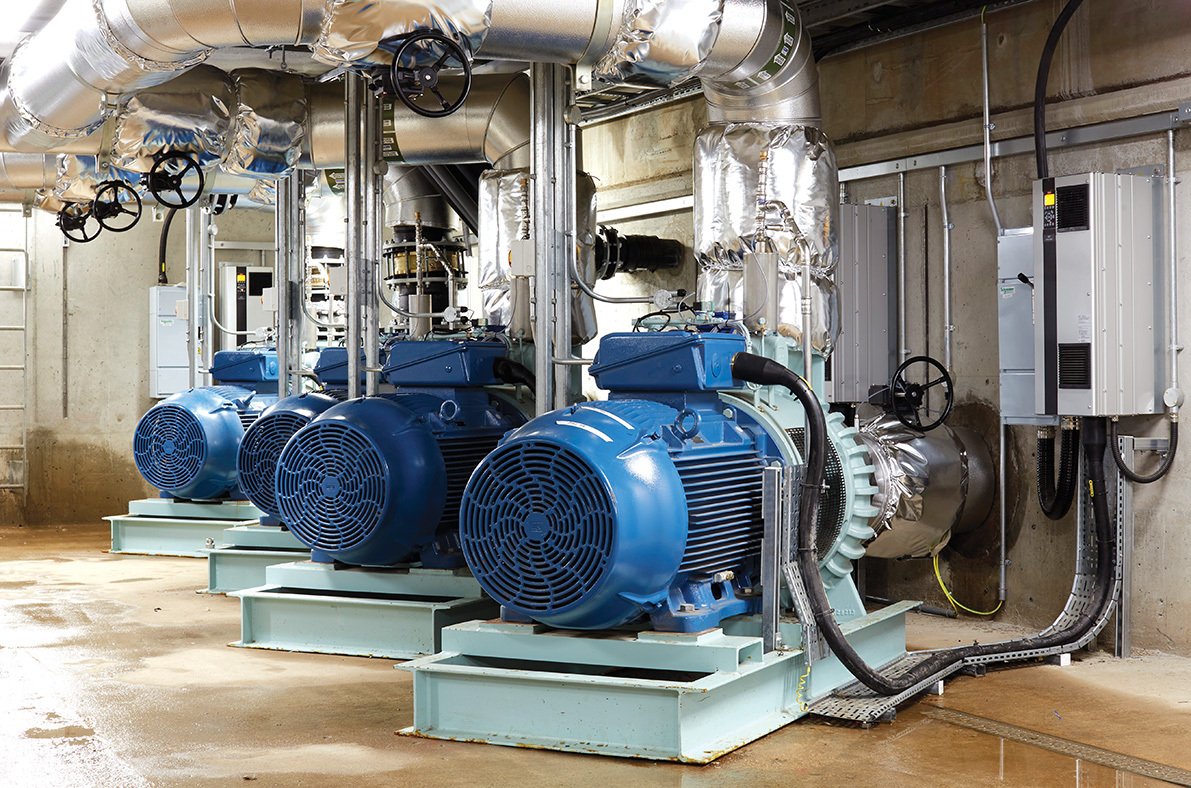 The abstraction pumps drawing water from the river Clyde

Vital Energi spent two years developing the new technology to meet these requirements. While it was designed with the next-generation district heating systems in mind, it can perform efficiently at higher temperatures.

This, combined with its ability to react to temperature changes, means it will stay optimised as the flowrates change throughout the season, giving real-time optimisation to the project.

Ian Spencer, associate design director, says: ‘Reduced temperatures mean reduced losses – and, while losses created by an individual HIU are comparatively small, when you multiply this by 1,200 and operate them over a 20-year period, it can deliver significant savings in operating costs and carbon.’

A review of a building’s energy system is essential to understand the changes needed to make it compatible with a lower-temperature district energy system. This, combined with a survey of historical energy consumption, begins to paint a picture of what is necessary, but historical oversizing of heat emitters and antiquated controls systems can actually provide a benefit, as they reduce the need to change the secondary side heating system.

On the new buildings, where we can have an input on design, we can deliver 70°C flow and 45°C, resulting in lower temperatures and a higher temperature differential.

Retrofits require more consideration in the design process, but we believe Queens Quay demonstrates that heat pumps are viable for buildings of all ages. Lowering temperatures, while improving insulation, emitters and controls, can be an extremely efficient energy solution. 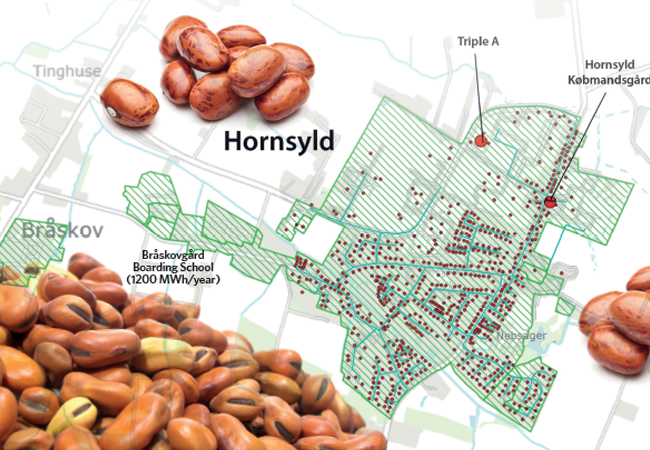