It’s widely accepted that the main fire risks to life in small buildings arise during the evacuation periods as heat and toxic products spread rapidly throughout the building. Local or disproportionate failure of the structure, which may happen during the later stages of fire development, are a secondary concern, providing no sleeping risks exist, adequate warning of fire is given and sufficient exit width is provided.

It’s understandable, therefore, that some fire engineers have questioned the need to  protect structural steel elements in low rise buildings. This is particularly so when it appears that fire protection is being used at the expense of other safety measures, such as suppression systems, which are possibly the most effective of all.

Unfortunately, the relatively high cost of these means few, if any, detailed studies have been carried out to determine their ability to act as a trade-off for passive structural fire protection in steel-framed buildings. This is unfortunate because fire suppression systems, in attacking blazes at source, will also protect against content, infrastructure and environmental losses in a way that structural protection alone, cannot.

In 2007, a unique opportunity arose at the Beetham tower to determine if the building’s fire suppression system could be used safely as a trade-off for structural protection in the four-storey steel-framed podium structure. The work was carried out using a risk-based approach similar to that used to develop new fire resistance periods in BS 99991. The opportunity only arose because the suppression system was being installed at the request of the operator (Hilton) and not as a means of satisfying any safety requirement.

The risk-based approach used Monte Carlo simulations – the parametric fire in Eurocode 12 and the limiting temperature technique as set out in BS 5950-83. It was executed on the basis that all steel columns and beams in the building would have been passively fire protected to achieve two hours of  resistance. The likelihood of individual steel elements being heated beyond their limiting temperatures in any one room was first calculated for the fire-protected option and then for the alternative option which relied solely on a suppression system being present in the room.

The relatively high cost of fire suppression systems means few, if any, studies have been carried out to determine their ability to act as a trade-off for passive structural fire protection in steel-framed buildings

For each case, the number of steel elements heated beyond their limiting temperatures in individual rooms was recorded and the results included into event trees. Each event tree allowed the risks to be compared relatively. The relative nature of the approach allows some of the limitations of the underlying fire and structural models to be overcome.

The methodology consisted of four main stages as illustrated in Figure 1.

The Monte Carlo analysis (Figure 2) uses different values; these typically being those attributed to fire load density and ventilation in the room of blaze origin. Each variable is assigned a distribution of values and this controls the frequency that different values are chosen when a set number of fire simulations are run. The technique is ideally suited to problems of this nature as the calculations are based on physical theory and experimental measurement. This helps compensate for a lack of information about real-life circumstances in a manner that other risk-based methods cannot. Furthermore, all assumptions are explicit and a measure of the sensitivity of these can be made by changing the value for a variable, re-running the simulations and then comparing the new results with those originally generated.

At the end of the process, 10,000 values of maximum steel temperature [protected and unprotected] have been calculated for each room in the building. The frequency that individual limiting temperatures would be exceeded is then calculated by dividing the number of exceeds by the total number of fire simulations run in that room. The overall risk for both design options is then computed by multiplying the relative risk by the frequency that fire was expected to reach the fully-developed stage. The required reliability of the suppression system for an equivalent risk level is then back calculated. The results are shown in Table 1. 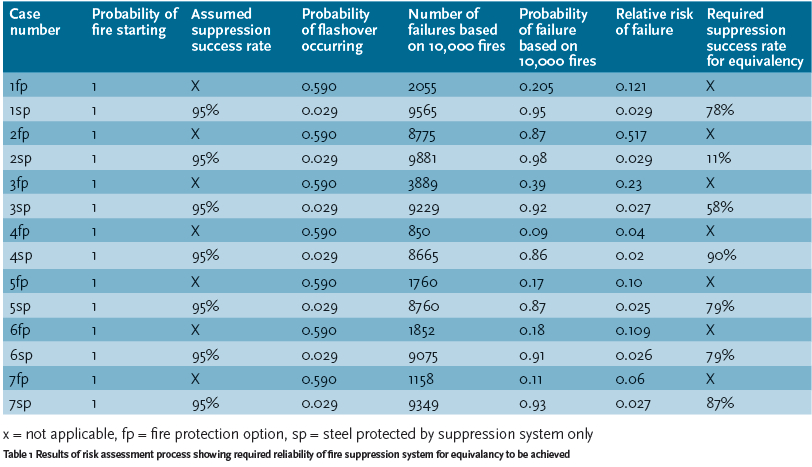 The analysis assumes that if the sprinkler system operates successfully then flashover and damage does not occur.

The results of the study show that the fire suppression system is capable of providing a level of structural safety at least comparable to that achieved should all structural elements in this building be fire protected to achieve 120 minutes fire resistance and that the required reliability of the suppression system for equivalence ranges between 11% and 87.0%. The average reliability rate for precise equivalency in this case is 53%.

There is no reason to suggest that the low-pressure water mist system used on this project would not achieve this overall performance level.

When analysing the results of this work consideration should be given to the following:

• The building did not need a fire suppression system to satisfy safety objectives.

• The podium is four-storeys high and has a composite steel frame that is structurally independent of the main tower. It is separated from the tower by a compartment wall that has 60 minutes fire resistance

• As the podium is structurally independent of the main tower, it could have been argued that a 60 minute fire resistance period was applicable for elements of structure. The fact that 120 minutes fire resistance was adopted suggests that the reported results may be conservative

• The analysis assumed all passive fire protection to be correctly installed, well maintained and, therefore, 100% reliable. This may not be the case in practice

• Had likely reductions in direct and indirect losses, as a result of using a suppression system, rather than passive fire protection only, been factored into the calculations, the cost and safety benefits of this alternative may have appeared much greater

In 2007, the work was reviewed by BRE and approved by Manchester City Council. Then, the building was thought to be the first to be designed using the risk-based techniques outlined here and probably the only low-rise steel-framed building that has a structure protected entirely by a fire suppression system. 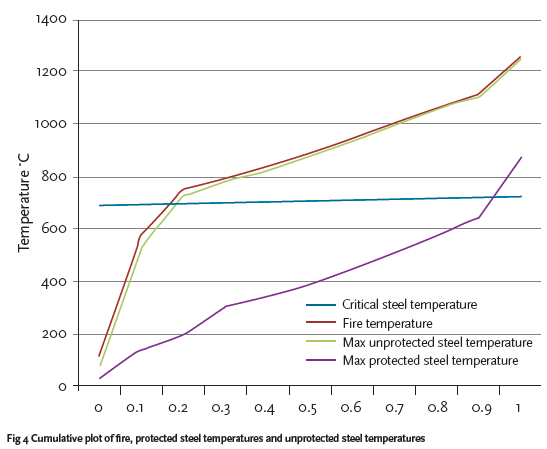