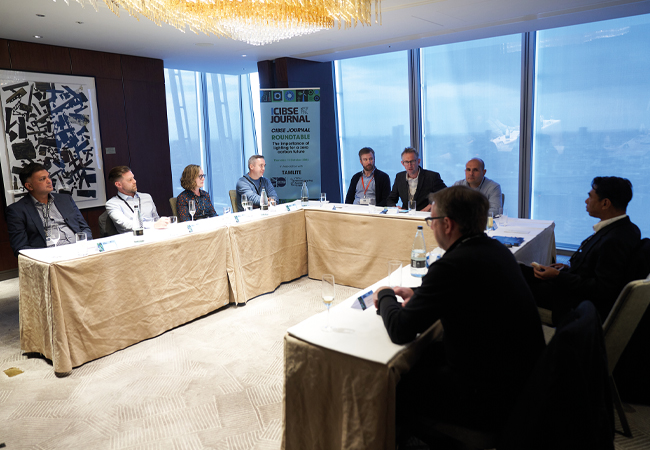 Against the backdrop of London’s dazzling skyline, leading experts from the world of lighting gathered at CIBSE Journal’s latest roundtable to discuss ways to reduce energy use. Tougher legislation, and educating and incentivising clients to choose lower luminance levels were some of the issues explored.

The event at the London Shard, sponsored by Tamlite, focused on the importance of lighting for a zero carbon future. It was agreed that, to decarbonise lighting, industry experts need to step up and take responsibility now, to help influence clients and drive change.

Andrew Bissell FSLL MCIBSE, partner at Ridge & Partners, began by outlining his involvement with the ‘dark skies concept’. This describes places where the night sky is relatively free of interference from artificial light. Historically, dark skies were considered only relevant to national parks, but Bissell said the concept can also be implemented in hotels, offices, airports and other building types.

‘We found that it’s not just the big developments, such as power stations and highways, that are the problem; it’s the millions of residential buildings. But the scale of this challenge is different,’ said Bissell, who is also president of the Society of Light and Lighting (SLL). 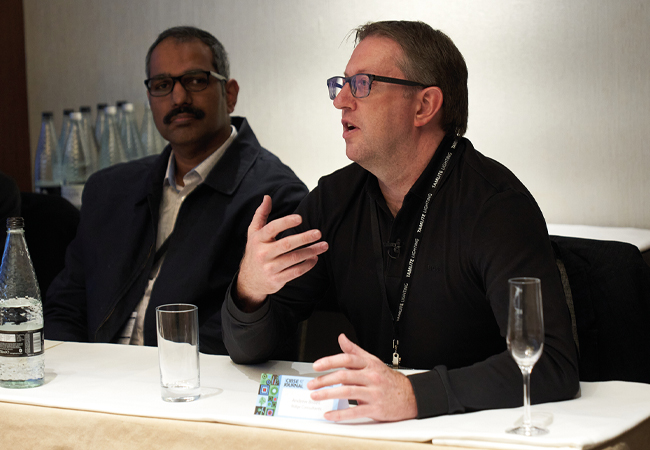 ‘Lighting on a road can be changed quite easily through legislation, but how do you change domestic lighting? We need to think differently and work together to create a nicer, healthier environment in terms of people being able to sleep with no spill light into windows. We then end up with less energy use and that’s a massive part of it. If the light is going where it should, less energy is used.’

Bissell said that an eco-tourism development in Saudi Arabia is the only client to date who is interested in employing the dark skies concept to a new building. The roundtable’s participants agreed that one of the most effective ways to encourage clients to employ dark skies in new UK developments would involve the introduction of strict planning conditions.

Traditionally, we’ve designed the lighting so that it delivers the same illuminance level everywhere. We must stop doing this now

Ruth Kelly Waskett MCIBSE FSLL, senior associate at Hoare Lea and a CIBSE board member, highlighted several challenges facing the lighting profession. The revision of BS EN12464 Lighting of workplaces means that illuminance levels need to be increased for older users who need more light. But this requirement works against the need to reduce energy consumption.

Natural light, said Waskett, can unlock this challenge if we think of it as our circadian lighting. We therefore don’t need to add extra illuminance to deliver circadian light artificially. Waskett also talked about the challenge of the Cat A office model, which sees landlords introduce lighting before space has been let.

‘Most of us are involved with projects like this, where we don’t know where the desks in an office will be,’ said Waskett. ‘Traditionally, we’ve designed the lighting so that it delivers the same illuminance level everywhere. We must stop doing this now, and we need to do it in a different way.’

While developers are responding to this problem to avoid wastage, Waskett is concerned about the smaller developments where this is not happening. 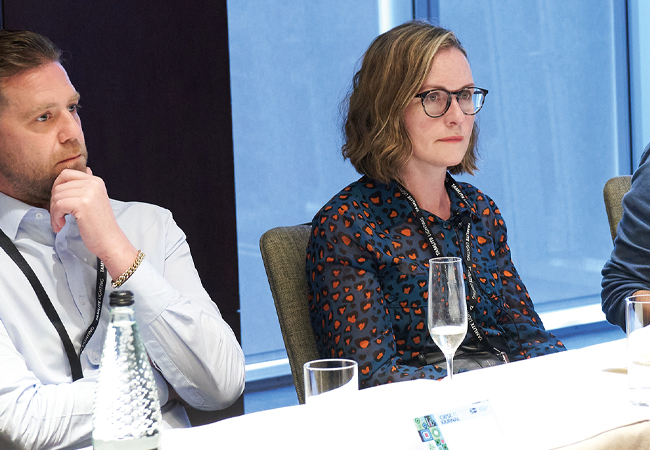 In addition, there is often over-lighting, where lighting is installed in between the task areas. Waskett stressed that users want a more visually interesting work environment, with layers of light and a hierarchy of illumination, not a uniform space.

Bissell suggested that this is where manufacturers could help by guaranteeing three different lighting design styles. Part of the problem, said Bissell, is that manufacturers provide a grid of lights so a tenant can move into an office immediately but a tenant doesn’t move in straightaway; the contractual process often takes much longer.

‘If manufacturers offered different lighting design styles, the question is whether the landlord would support it, because it does involve more work. I’ve been saying this for a long time and so have many other lighting consultants, and it’s not changing.’

Anand Desai, founding partner at Direct Synergy, said that the reason this is not changing is because clients are so ingrained in the British Council for Offices (BCO) guidelines.

‘The attitude needs to change, people need to be educated to do this in different ways,’ said Desai. ‘Start with a lower lighting level and integrate task lighting.’

Farhad Rahim, associate director at Buro Happold, agreed, and said Buro Happold is already proposing low≠ level lighting in many of its schemes, which a few clients are taking up. He added that it is common in European offices to employ low-level lighting (about 200 lux) to light up a space and then add task lighting, which must be controlled with a second layer of power and supply.

‘Task lighting gives people control of their own environment and they feel happier, and productivity will increase, but there’s a reluctance to add that second tier of lighting purely due to cost, and this needs to change,’ said Rahim.

Waskett argued that we can’t achieve lower energy use by light luminaire efficacy alone. Things must be done differently if we are to achieve change. She recommended that fewer fittings should be specified, and lighting consultants need to be more closely involved in the commissioning of controls.

She said the problem is that lighting experts don’t have the privilege of continuing their appointment post-occupancy. Therefore, they have no idea why some lighting doesn’t work properly or in the most efficient way.

Bissell also cautioned that it is important not to become obsessed with figures to achieve a net zero carbon building, as it becomes a barrier to good lighting design.

He cited a Cat A fit-out in Birmingham that achieved a blanket lighting scheme with 120 lumens per watt that used 4.5 watts per metre square. Bissell’s suggestions of first considering different scenarios of where desks might go near windows, for example ñ before installing the lighting were largely ignored.

‘Everyone raved about this office because of the lumens per watt that was achieved, but the result was a five- year step back. It’s good to push things forward, but there must be education behind why it’ s being done. It should be about good design,’ said Bissell. ‘You’re not going to achieve anything with a single number; you might achieve slightly less energy being used, but it’s still wrong.’

Desai added that, with the targets of the regulations changing, clients will have to increasingly implement more energy saving measures in terms of the operational energy use of buildings.

‘There’s a lot of greenwashing,’ he said. ‘A building may have been designed to be net zero, but five years down the line is it being operated as it was intended? That’ s why things like Energy Performance Certificates and Part L are important, because they’ve been designed for operational compliance.’

The discussion then turned to whether the circular economy is important when specifying lighting.

Waskett said it is hugely important. As a specifier, she can distinguish between products based on their embodied carbon and the provenance of all the materials, and how the fitting has been put together. She is also concerned about disassembly and ease of use.

Bissell agreed, and said that he knows of a manufacturer who will replace a light if the driver fails and ask for the broken one to be sent back. The manufacturer will then fix it and return it to the stock.

Bissell believed that environmental, social, and governance (ESG) is behind this approach. ‘This manufacturer’s clients are looking for every possible way to be better and this is one way they can do that,’ he said. ‘We must get back to a way of being able to change a lighting component and making it easy to do this.

‘Companies have realised the importance of this, and it will happen. We are now at a stage where we are suggesting that we design whole buildings with circular lighting components of a certain standard. It’s not possible yet, but it will be.’

It was suggested that the technical guide TM66 Creating a circular economy in the lighting industry could help to make this happen.

Bissell, who is involved in the TM66 guide, said: ‘We have invited founding partners, manufacturers, consultants and clients to help fine-tune and evolve this document, and the feedback has been very useful. For example, some manufacturers questioned why they should be marked down for using a plastic component if it lasts for 30 years and said that, instead, they should be marked up for having something that lasts so long.

‘As a result, we have been more pragmatic. I can see that, once TM66 is launched, it will really take off. There will be certain clients with ESG agendas who will insist on it and only target circular economy fittings. Once that happens, manufacturers and others will have to do it.’

Waskett argued that incentives to retain equipment and re-use it are also needed. Replacing lighting with LED s is often suggested as the best and most energy efficient approach, but, according to Waskett, this isn’t always the best solution. It takes expertise to suggest that existing equipment be retained.

Dark skies are not just about seeing the stars; it changes people’s perspective of the world. We sense how small we are, and see the bigger picture

The participants agreed that the decarbonisation of lighting needs to speed up and will only happen if it’s a legal requirement. As lighting professionals, they need to take responsibility to inform clients about making the right decisions, and legislation will help to incentivise them.

Rahim concluded the discussion with an interesting conundrum for a lighting professional. He said he now tries not to light things up and is enthusiastic about dark skies and the mitigation of light spills. He argued that way-markers and guidance lighting is more than enough to keep people safe. Constant illumination and uniformity should be avoided.

‘Dark skies are not just about seeing the stars; it changes people’s perspective of the world. We sense how small we are, and we see the bigger picture,’ said Rahim. ‘That’s why dark skies are so important, it’s not just for the environment, it’s for the species and for our sanity.’