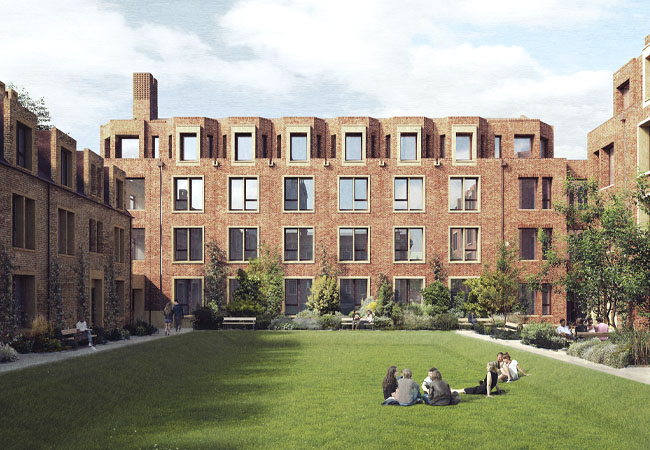 Electricity is replacing gas as a cleaner source of heat. The phase-out of coal-fired power stations and the growth in renewables, such as wind and solar, have made grid electricity a low carbon, cost-effective replacement for gas in heating.

Energy transitions are not new; decades earlier, natural gas was used widely as a ready replacement for coal and the sulphurous smog it made. Centuries before, the concentrated heat in coal meant it replaced wood, which had been burned to provide heat for thousands of years.

All of these historic energy transitions have featured on the site of a new development in Cambridge, where Pembroke College is undertaking a significant expansion in the historic city centre, on a site bordering the River Cam.

Designed by architect Haworth Tompkins, the proposals for the Mill Lane redevelopment include: demolition of a number of unremarkable buildings and their replacement with a new student residential court; the restoration of a number of historic and significant buildings to provide new teaching, meeting and seminar rooms; and the creation of a new gallery and performance venue in the listed Emmanuel Reformed Church. 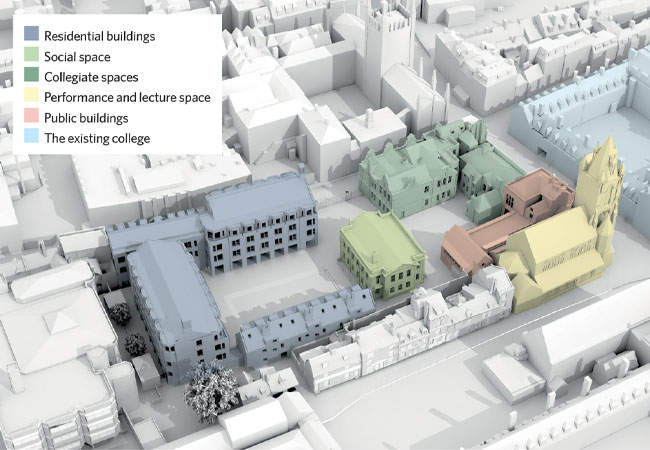 If this scheme had been designed a decade ago, gas would have been the obvious choice of fuel for heat. What makes it significant is that it is one of the first of a new wave of large-scale projects where heating (and cooling) for the entire development is to be supplied by electricity-powered air source heat pumps (ASHPs). ‘The transition to low carbon electricity for heating and cooling in buildings is happening, and it’s happening now,’ says Joel Gustafsson, director of Joel Gustafsson Consulting, the project’s building services engineer.1

Fabric energy performance is fundamental to the success of the scheme. New-build areas, such as the accommodation block, Dolby Court, will have high fabric-performance standards from the outset, while the fabric performance of the retained elements will be upgraded significantly.

‘Working with the architect, we undertook a full sustainability audit, which resulted in increasing the airtightness of the buildings, enhancing the amount of PVs on roofs, increasing insulation levels, and even a reduction in the embodied carbon,’ Gustafsson explains.

To develop the façade design and to prevent the students’ rooms from overheating in the main accommodation block, Gustafsson has used a combination of CIBSE TM59 and CIBSE TM52 to arrive at a comfort strategy. Both documents (available at cibse.org/knowledge) address the risk of overheating in buildings; TM52 can be used to assess any type of commercial building, whereas TM59 has been tailored to target overheating risk in homes specifically.

‘We have used a composite of CIBSE TM59 and TM52 for the overheating strategy because student rooms are simultaneously domestic and commercial work spaces,’ he says.

To develop the façade design and prevent students’ rooms from overheating, a combination of TM59 and TM52 was used

Unfortunately, Dolby Court is positioned on busy Mill Lane. Noise from the street prevented windows in rooms fronting the thoroughfare from being opened for ventilation to achieve acceptable levels of comfort. So, in addition to heating, the rooms incorporate cooling and mechanical ventilation with heat recovery.

Heating is in the form of an underfloor system, with pipes embedded in the floor screed; cooling is provided by pipes embedded in the concrete soffit, in what Gustafsson describes as ‘an augmented passive strategy’. He says the cooling system temperatures – designed to run at 14°C flow, 18°C return – will be ‘allowed to creep up’ if it is very warm outside.

Both heat and coolth are supplied by the site’s electric ASHPs through a heating and cooling network. These are housed in the ground-floor plantroom, beneath Dolby Court. ‘Electric heat pumps are the new norm,’ says Gustafsson. ‘Pembroke College subscribed to that view because it knew it was the right thing to do, environmentally, and it could see the longer-term trend – so it has taken the longer-term view’.

The scheme’s design is still being finalised. ‘Right now, we’re investigating the option of using natural refrigerant-based heat pumps, of the type established in the European market, because the client is keen to understand the possible efficiency gains and environmental benefits,’ says Gustafsson.

Initially, a ground source heat pump solution was considered alongside the air source units. However, site spatial constraints meant the ground source system would have been confined to a single pair of abstraction and injection boreholes, with an estimated output of around 100kW – about 20% of peak heat demand. It was concluded that the cost and complexity of operating two concurrent systems was not warranted, so the idea was abandoned. 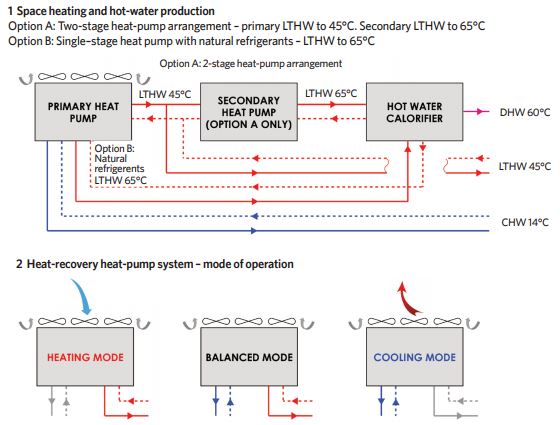 Subject to the ongoing review, the base case is that three large ASHPs, each with the capacity to supply up to 150kW of heat for space heating and 135kW of cooling, serve the site-wide network. The primary hot-water circuit is designed to operate at a temperature of 45°C flow/40°C return. A secondary heat pump will raise the water temperature to 65°C to supply domestic hot-water calorifiers, located in a basement plantroom next to the main plantroom. They serve all the new buildings, plus the catering in the refurbished 6 Mill Lane. A chilled water circuit will operate at 14°C flow/18°C return to supply cooling to Dolby Court and a basement screening room, art gallery and teaching spaces. The former United Reformed Church, however, remains passive as the Victorian natural ventilation provision still holds its own against the CIBSE TM52 standard for lecture and performance use.

‘The lower your heating temperature, and the higher your cooling temperature, the less work the heat pump has to do to provide the outcome that you want,’ explains Gustafsson.

‘If we take the church, for example. At the moment, there are slimline radiators behind panels; the panels are being retained, so we’re1 using highly engineered aluminium radiators, which incorporate a little fan to assist the heat transfer from them,’ says Gustafsson. ‘It’s the same technology, it’s just that the bit you don’t see is better engineered.’

The three heat pumps are sized to meet the total load. There is no additional capacity because the system incorporates a level of resilience. In the event of a heat-pump failure, a maximum of one-third of peak load will be lost. ‘In the majority of situations, there will still be enough capacity to sustain a reasonable level of service for a period of time, while the main plant is repaired or replaced,’ says Gustafsson.

In addition, each individual heat pump has inherent resilience because it has two compressors and four fans; if a fan or a compressor fails, the heat pump is still capable of providing up to half the load.

The heat pumps have three modes of operation:

‘We’re using heat-recovery air source heat pumps so that we can take the heat from the places that have excess and put it into either space heating or domestic water – which reduces the amount of electricity needed to keep the buildings comfortable,’ says Gustafsson.

‘We’re also incorporating buffer vessels to maximise the time the system will spend in balanced mode.’

A small additional heat pump will be installed to keep the cold-water system cold. According to Gustafsson, high temperatures are becoming an increasing issue for cold-water supplies, particularly in college buildings. As water temperatures rise, the management of legionella risk becomes more onerous and the quality of service decreases.

To overcome this, the scheme will include a heat pump to cool the water within the cold-water tank so that stored water is always below a set point of about 10°C. The small amount of heat rejected will be transferred to the hot-water calorifiers. Additionally, the temperature of the water throughout the system is monitored and low volumes are automatically discharged when the water in the pipework goes above 15°C. This will ensure low-temperature cold water is available at every outlet, regardless of usage patterns or ambient temperature. It has the additional benefit of removing the water waste associated with flushing water through the system to manage legionella risk.

A HISTORY LESSON IN ENERGY SUPPLY

In the 19th century, the Pembroke College site was the industrial heart of Cambridge when it housed a large water mill for milling grain from the surrounding farmland. Later, the site was home to the Bailey Grundy Barrett Building, headquarters of the Cambridge Electric Supply Company (now being demolished to make way for Dolby Court). Bailey Grundy Barrett operated the first coal-fired power station in the city, using coal delivered by barge on the river Cam. 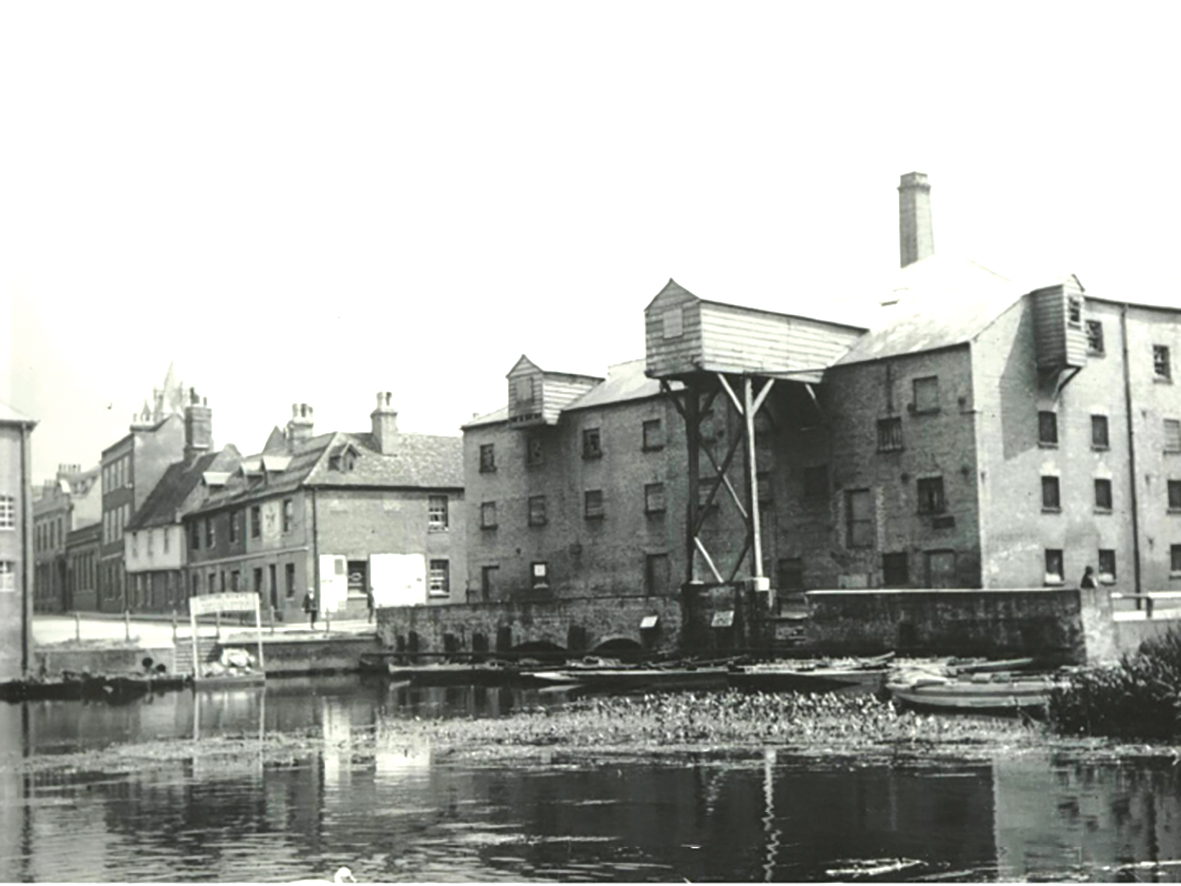 The power station generated electricity from 1893 until nationalisation in 1947. In addition to burning coal to generate power, coal was burned to provide heat in many of the buildings, as their numerous chimneys testify. Now, the coal fires have been replaced with cheaper and more convenient gas-fired boilers. Soon, these too will be gone, replaced by electric air source heat pumps.

To provide electricity to the development, the existing substation, which is located in the soon-to-be-demolished Bailey Grundy Barrett Building, is being relocated. In a nice touch, the building to house the substation will be built using bricks reclaimed from the demolition of the former headquarters of Cambridge’s first electricity company. A 2MVA substation (incorporating two no. 1 MVA transformers) is proposed for the southwest corner of the site.

As well as designing for the present, the design team is designing for the future. Pembroke College has been in existence for hundreds of years (it was founded in 1347 by Marie de St Pol, Countess of Pembroke); the new buildings are expected to be in use for many, many years to come.

To ensure Dolby Court’s plantroom can accommodate the equipment it will need to meet the next energy transition – whatever that will be – the design team has provided it with additional space.

He is already eyeing up the additional space to house a large storage battery, which will enable the college to buy grid electricity when it is cheap and store the energy generated by the site’s PV installations. ‘A battery will probably have an economic value, and will further reduce the environmental impact of the scheme, because electricity is cheap when it’s low carbon,’ Gustafsson says.

Work on the scheme is set to start this month, with demolition of some of the unretained buildings. Construction is expected to start in 2022. When the heat pumps are installed, the site’s next energy transition will be complete.

1 Joel Gustafsson completed the design from concept to RIBA stage 3 as a partner at Max Fordham. Delivery of Dolby Court, including the technical design of the site-wide heat pumps, is being undertaken by Joel Gustafsson Consulting. Max Fordham is the services engineer on the delivery of Phase 1 buildings.