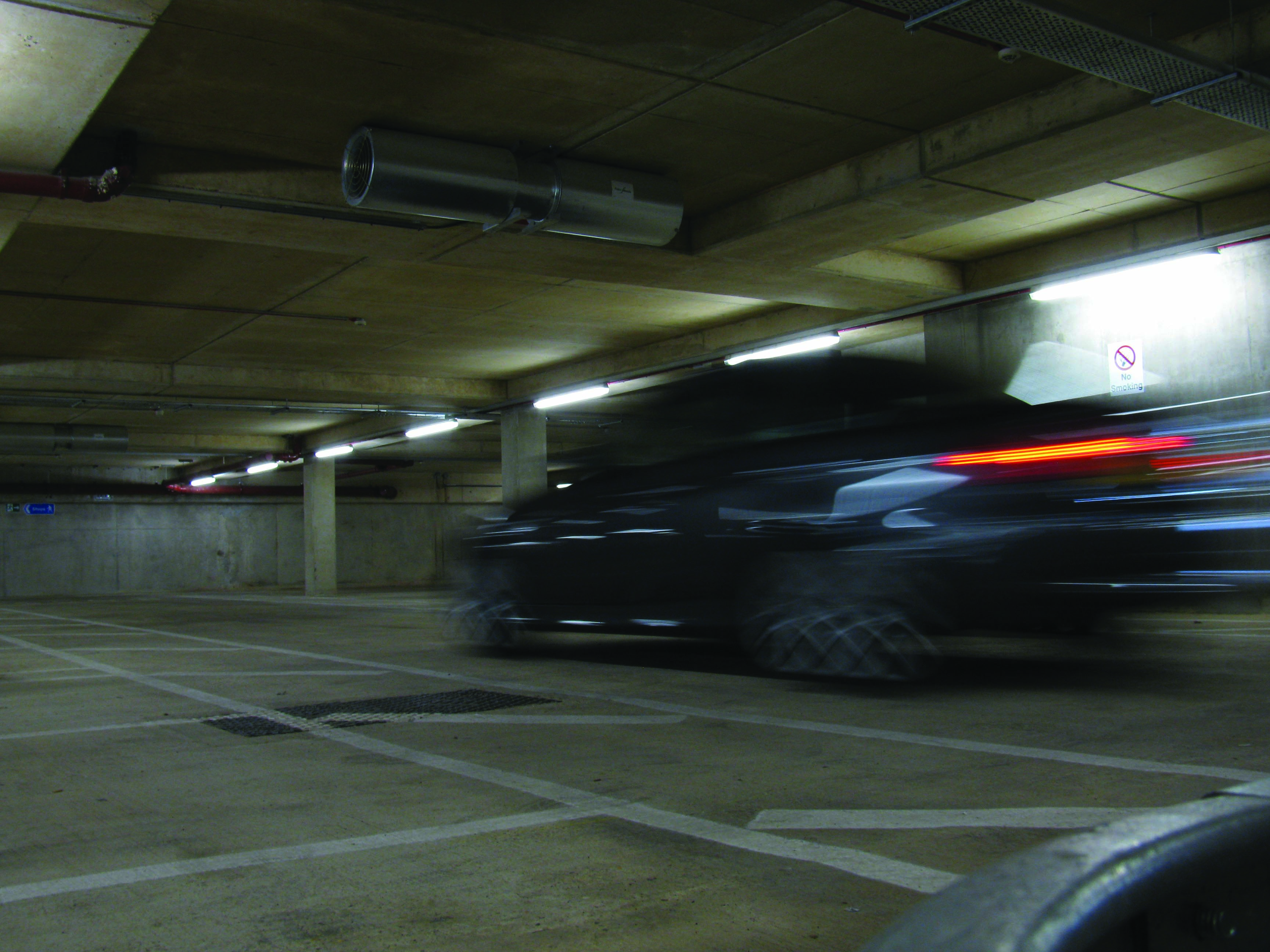 Practical, powerful and cost-effective – it’s no wonder thrust fans, which includes both jet and induction technology, are now the first choice in car park ventilation throughout the UK and worldwide. Tracing their roots to the tunnel fans pioneered in the 1960s, their adaptation for enclosed car parks over the last 20 years has elevated them above traditional ducting design.

Yet, despite their technological and practical superiority, there is often a lack of cohesion in the industry when designing new systems and using thrust fan technology effectively.

It is important to remember that fans selected for a car park ventilation scheme form part of a collection of fans, which interact with each other and their surroundings

The cut and thrust of design

There are currently two design approaches for a thrust fan system: smoke clearance and smoke control. Firstly, smoke clearance systems meet the requirements of the Building Regulations – Part B and Part F, which define air change rates for smoke and pollution extraction, based on a set number of air changes per hour (10 and 6 ac/hr respectively). However, a smoke clearance system doesn’t take into account the potential size or location of a fire, and neither does it aid escape or firefighter access. British Standard 7346 Part 71, which was published in 2006, has gone some way to address this issue by including design parameters for smoke control systems, while ensuring the use of thrust fans does not worsen conditions for escaping occupants or firefighters.

The second option for building services engineers is a smoke control system. These are designed to manage smoke movement, while facilitating firefighter access within the necessary visibility and temperature criteria. Despite not yet being a requirement in the UK, these type of systems are fast becoming a preferred choice for new car park construction, where the parking area on a single floor is sufficiently large enough (typically floor areas greater than 4,000m2).

Car parks smaller than 4,000m2 become less suitable for smoke control due to greater confinement of the fire, fewer options for control over the direction of airflow, and reduced plant room space. In these cases smoke clearance is usually the chosen path.

Whichever method is chosen, there are a number of factors that must be considered during the design stage to ensure building design engineers avoid future problems, as well as reduce the possibility of worsening conditions during a fire.

For more than 10 years, computational fluid dynamics (CFD) has been relied upon to design and demonstrate an effective thrust fan system. The use of CFD is considered essential because of the complexities of air movement involved. However, on some occasions, the timescales required for calculating airflow and fire conditions for a variety of scenarios can make CFD expensive. Furthermore, the outcome of a CFD simulation is only as good as the input data, with the accuracy of results varying significantly according to what information is used – ranging from the boundary conditions applied to represent walls and ceilings, to the choice of model for the fire source.

Consequently, many fan manufacturers are now using this technology to provide their own data and aid engineers in the design process, highlighting some key factors to consider when specifying a system. It is important to remember that fans selected for a car park ventilation scheme form part of a collection of fans, which interact with each other and their surroundings. So, it is essential that they are specified taking a holistic approach – encompassing the whole system – rather than treating each fan separately.

Some of the key points to take into account during the design stage include: jet fan performance; lateral spacing; the total number of fans specified; and installation effects.

Jet performance can vary widely from product to product, with the effectiveness of each fan fluctuating, depending on how each is installed. So, by using the velocity profiles supplied by the manufacturer as reference data, engineers can obtain vital information about the throw length and width of a jet from the fan. Plus, it demonstrates the total quantity of air moved over a specific distance when installed. It’s this level of detail that can help systems meet a higher level of safety by going beyond the standard technical datasheet.

In addition to the effects of building geometry, the lateral spacing – distance between neighbouring fans – has a significant effect on system performance. For example, the effect of installing a 400mm diameter fan at, say, 10m spacing instead of 15m, can have a dramatic effect on the velocity profile. With larger gaps between the thrust fans, isolated velocity profiles can form, preventing a uniform flow. This may require higher extraction rates to be employed to effectively fill the gaps, especially if the flow is expected to control smoke from a vehicle fire in all areas.

However, the potential issue here is that the extract flow is usually already fixed by the size of the shafts or openings – again highlighting the need to incorporate such data into the early stages of system design.

In car parks there are a variety of obstructions to airflow, such as pillars, down-stand beams and larger impediments, including internal rooms and stair cores. Other significant losses in airflow include the pressure developed by a fire, its location – whether the fire is in a corner or is some distance away from a wall – and large increases or decreases in floor-to-ceiling height. These factors are referred to as ‘installation effects’ and they need to be fully understood by the ventilation system designer.

Not all thrust fans will have a direct influence on the extract flow rate. Selected fans will be used for distributing air, while others accelerate air and smoke towards an extract point. If thrust fan systems operated by automated controls are not balanced – and there are too many fans – it can result in backflow of smoke or, worse still, rapid acceleration of smoke beyond zone boundaries, particularly in large multi-zoned car parks. (See figs 1 and 2.)