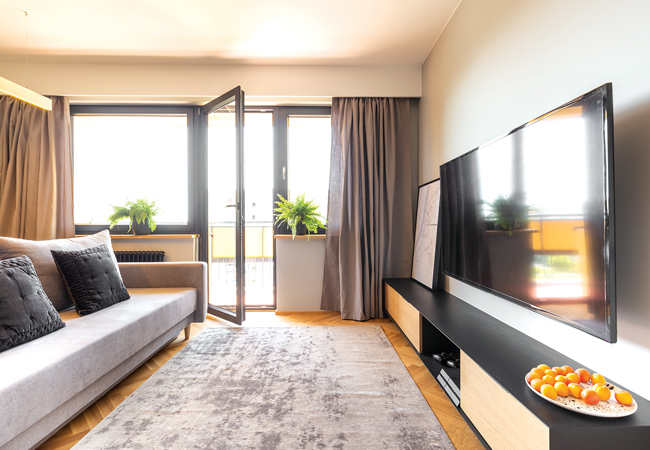 European standard EN 17037 for daylight in buildings was approved in 2018. Its introduction asserts that: ‘Daylight should be a significant source of illumination for all spaces with daylight opening(s).’1 The word ‘opening’ appears 139 times in the standard.

This article gives a brief summary of a fundamental reconsideration of the way in which a building opening (or aperture) can be evaluated in terms of its potential to provide sunlight, skylight and views.

The means of evaluation in each case are purely geometrical, so not subject to the vagaries of the ‘performance gap’. The approach – designated aperture-based daylight modelling (ABDM) in 2019 – was conceived to be a major upgrade of the methodologies traditionally used in planning guidelines for daylight/sunlight.

Though radical in conception, the theoretical basis of the new approach is remarkably simple. So simple, in fact, that it may seem long overdue.

One basic principle that distinguishes ABDM from traditional methods used in planning is that it is an area-based approach – in other words, the connectedness across the entire opening is considered. Many, if not all, traditional methods for, say, sunlight evaluate at a point – for example, BR 209 Site layout planning for daylight and sunlight.2

A second distinguishing feature (a consequence of the first) is that all ABDM evaluations take account of the size of the opening. This is worth emphasising because – while self-evidently a desirable component for evaluation of, say, sunlight – opening size is not a factor in the method used in BR 209. A third distinguishing feature (a consequence of the first two) is that the results for multiple openings – whatever their size, aspect or orientation – can be combined to give meaningful totals for, say, a particular dwelling.

The notion that the principle behind ASI could be used to meaningfully quantify view was, for this author, one of those rare ‘eureka’ moments

ABDM was conceived to allow for a seamless workflow progression from outline planning to detailed building performance evaluation – for example, climate-based daylight modelling, overheating prediction, energy compliance, and so on. The approach evolved over four years: the sunlight part in 2015,3 the skylight part in 2017,4 and, finally, the view part in 2019,5 as discussed below.

The sunlight beam index (SBI) is an area measure of the ‘connectedness’ of a building aperture to all possible occurring sun positions for that locale and for that particular aspect of the aperture, including all possible obstructing surfaces – averaged across the aperture. SBI has units of m2 hours. For any given period of time, SBI can be thought of as a measure of the cross-sectional area of sunlight beam that passes through the aperture over that time.

The aperture skylight index (ASI) is an area measure of the ‘connectedness’ of an aperture to the sky vault in terms of the illumination received from a uniform luminance sky dome, averaged across the aperture. ASI has units of lumens. In contrast to the SBI, the ASI depends only on the size and aspect of the aperture – it has no dimensions of time and it is not dependent on the azimuth (the angle between a celestial body – sun, moon – and the north) orientation of the aperture relative to the hemisphere of sky.

Nor, of course, does ASI depend on where the building is located (unlike SBI). The SBI has a natural normalisation as described in its original formulation (with units of m2 hours). For a 1m2 unobstructed vertical aperture, the annual SBI for London (UK) varies between 204m2 hours (facing north) and 1,927m2 hours (facing south). For the sky, however, the choice of normalisation is essentially arbitrary. So, it was decided to normalise the sky to give a horizontal illuminance of 2,000lux – and so a vertical aperture of 1m2 has an ASI of 1,000lm. The same aperture horizontally (for example, a rooflight) would have an ASI of 2,000lm.

Views that incorporate all three ‘layers’ are the most completely satisfying to occupants.

Outcomes are almost impossible to gameplay – provided the geometry is sound, the values computed will be precise and repeatable

The notion that the principle behind ASI could be used to meaningfully quantify view was, for this author, one of those rare ‘eureka’ moments when something that, with hindsight appears obvious, crystallises in the mind. It occurred with the realisation that there was a direct equivalence between aperture connectedness to the sky (as quantified by ASI) and the potential view of the sky from that aperture. In other words, the lumen values for the sky can be considered to be measures of the view of the sky averaged across the aperture for the respective cases. So, the lumens received at the aperture are used as a proxy for the view potential for that aperture.5

In the final version of ABDM, the ASI on its own becomes redundant, as it is superseded by the more general view lumen. This accounts for the entirety of the view from the aperture (though the numerical value for the ASI is the same as the view lumens from the sky).

The final stage in the schema is to define the notion of ‘lost lumens’. This is done in keeping with BS 8206, where the view layers are generally assumed to be somewhat distant from the aperture – although it is not explicitly stated. Accordingly, lost lumens are those that result from very nearby fixed obstructions – that is, any part of the building of which the aperture is a part, such as window reveals, balconies, overhangs, solar shading, and so on.

For a practical application of an ABDM evaluation to a plausible urban apartment design see below.

This article describes the first application of ABDM to a plausible evaluation scenario. The conceptual shift in equating ‘connectedness’ with ‘view’ in the final ABDM schema is nothing short of dramatic.

The observation that a ray of light from the outside can only enter inside by passing through a building opening is so banal that it hardly needs pointing out. Nevertheless, it has taken more than 20 years since climate-based daylight modelling was first demonstrated (by this author) to arrive at an inherently much simpler methodology that is suitable for sunlight and daylight planning, and early design-stage decisions.

The outcome from an ABDM evaluation depends entirely on the geometry of the scene and, for the sunlight part, where it is located. So, it is almost impossible to gameplay: provided the geometry is sound, the values computed will be precise and repeatable.

The impetus for ABDM was experience on EU/CEN panels resulting in the realisation that a rethink of the basis of building standards/guidelines was needed – certainly for application at the planning level. It is early days, but the response from practitioners has been very encouraging and the author looks forward to progressing this new idea.

ABDM Evaluation of an apartment

An apartment featuring two glazed doors opening onto a balcony enclosed on all sides has been used in this practical application of an ABDM evaluation (Figure 1).

The windows face due south and the building is located in London. The apartment faces an external obstruction (the dimensions are not important for this illustration).

The first row of images in Figure 2 show hemispherical fisheye views from the centre of the glazed doors and normal to the plane of the glazing for four cases:

(c) No context/obstruction – no balcony, with external obstruction 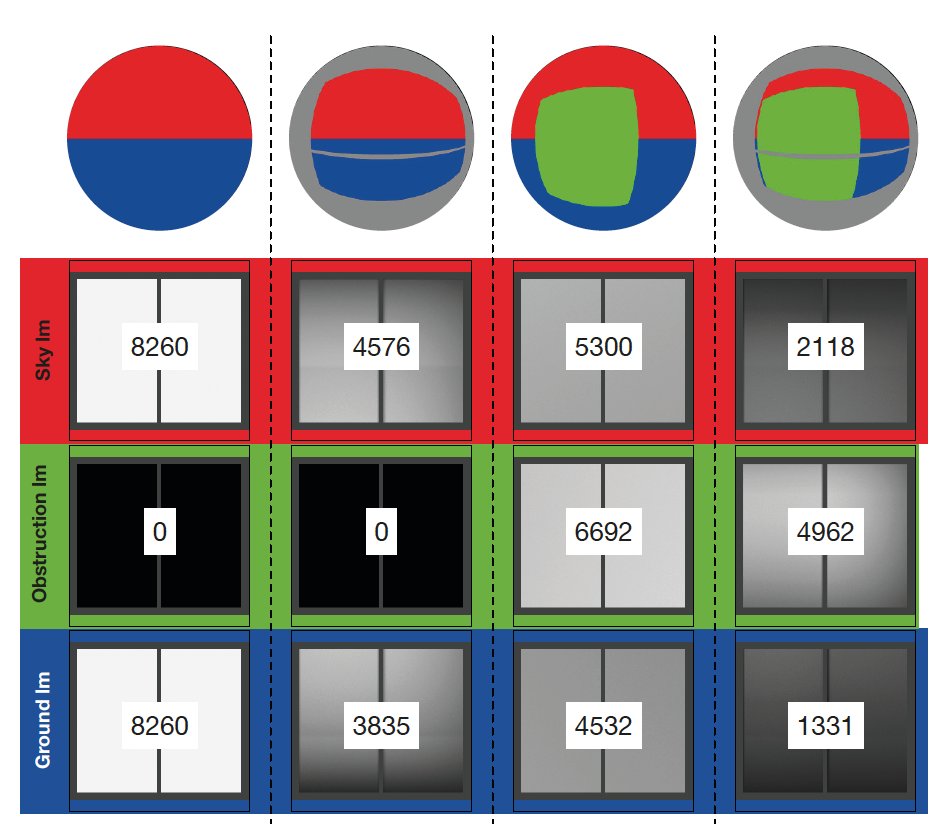 Figure 2: Lumens received at the glazing aperture of the apartment in four cases

The colour convention used is red, green, blue for – respectively – the sky, the external obstruction and the ground.

Connection to the three layers of view

The lumens received at the glazing aperture from each of the three layers of view for all four cases is annotated on each image of the apertures in the respective row/column position. For case (a), the glazing receives the maximum possible lumens from both the sky and the ground – that is 8.26 x 1,000 = 8,260lm. In other words, from any point across the apertures, the hemispherical view is equally divided between the sky and the ground.

The lumen loss is not the same for the sky and the ground because the glazing does not occupy the full height of the balcony opening.

Also, as noted previously, the actual lumen loss is always greater than that which seems apparent from the hemispherical image because the viewpoint for the image (the centre of the apertures) is invariably the point from which peripheral features – balcony, overhang, and so on – have the smallest apparent obstruction.

This highlights the importance of considering the entire aperture in any daylight/sunlight evaluation.

The effect of the obstruction alone is determined for case (c). Here, the view lumens for the obstruction equal 6,692lm, indicating that the overall view of the obstruction – that is, across the apertures – is almost comparable to the completely unobstructed view (8,260lm) of the sky (or, equally, the ground).

Finally, case (d) has all the elements in place: balcony, overhang, external obstruction, and so on. Here, it is evident that the combined effect of immediate context (the balcony, overhang) and the external obstruction reduces the sky lumens to 2,118lm and the ground lumens to 1,331lm. The obstruction lumens now equal 4,962lm – still significant, but the actual effect is more faithfully quantified because it now excludes those view lumens already lost to the context.

John Mardaljevic, FSLL, is professor of building daylight modelling at the School of Civil and Building Engineering, Loughborough University