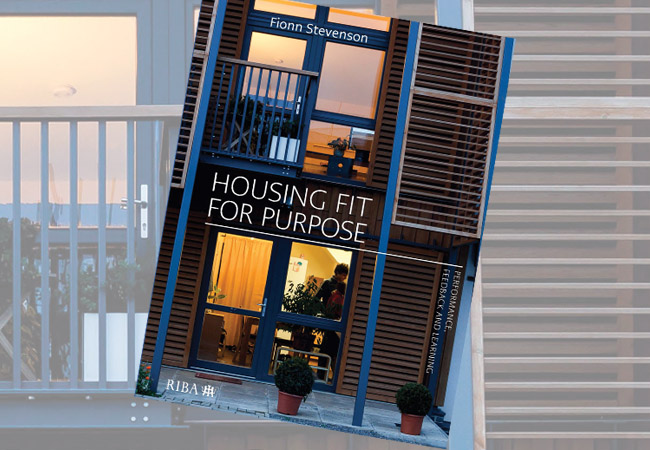 Building performance evaluation (BPE) has been applied and promoted for years, mostly by the Usable Buildings Trust and through the development of the Building Use Studies (BUS) surveys and Soft Landings. The focus, however, has often been on the non-domestic sector, rather than housing.

Professor Fionn Stevenson’s latest book, Housing fit for purpose: performance, feedback and learning, addresses this and offers a wide range of lessons from housing BPE, and detailed and practical advice on how to apply it. It should prove particularly useful now, amid increasing attention from professional institutions and policy-makers on the operational performance of buildings, including energy, comfort, and health – for example, the upcoming updated RIBA Plan of Work on performance.

Stevenson’s book is full of BPE lessons, case
studies and anecdotes, often based on her decades of experience, such as her pioneering studies of overheating in Scotland. Some are specific to housing and others – such as the importance of commissioning, occupant inductions and simple user guides – will be familiar to other sectors.

Stevenson often sees ‘excessive faith in technology’, in systems that are overly complex or when designers dismiss evidence that a system is not performing well, claiming that ‘occupants must be interfering with it’. She has many examples of overcomplexity in relation to controls, ventilation systems, and ‘smart homes’ in general. Occupants are more likely to engage with controls that are simple, well explained and useful.

Stevenson finds that passive design generally works better than active technology, and is preferred by occupants. It does, however, need attention, because some features may not work or be used as intended. For example, thermal mass may not improve thermal conditions if – for reasons such as outside noise or midges – occupants leave windows closed at night. Another classic BPE observation is to find plug-in electric heaters, or living room doors open onto unheated ‘sun spaces’ or ‘winter gardens’, thereby increasing energy consumption.

As a result, practices that have integrated BPE into their organisation by systematically applying it, sharing lessons internally, and feeding them into their projects, have often become leading-edge low-energy and sustainability practices – as is the case for many CIBSE Awards winners.

Stevenson also makes interesting points about the idea and terminology around ‘optimised performance’ – and, particularly, who the buildings are optimised for. She argues convincingly that, in making buildings flexible and resilient, it is important to cater for different occupants and their varied lifestyles, backgrounds, comfort preferences and so on. This is something also recommended in CIBSE guidance

There is a wide range of BPE methods, which vary in complexity, costs, duration, and levels of skills and experience required – both for the assessment of physical performance and user experience. Stevenson defines them as ‘light touch’, ‘diagnostic’ and ‘forensic BPE’. Extensive methods should not be applied without good reason, she says, and a light-touch exercise – such as site visits and occupant interviews – can be very useful.

Beyond individual buildings, there is much value in longitudinal studies, going back to the same building over the years, and studying several homes of the same type. This will help assess new construction practices or innovative systems.

Stevenson insists on the value of interdisciplinary studies, ideally involving several disciplines or through an experienced BPE professional. Too often, she finds that BPE only considers building performance from one angle – typically the technical one. She recommends investigating more deeply how the physical performance – for example, temperature, energy consumption – relates to the occupants’ experience, ways of life and socio-cultural context.

About the author
Dr Julie Godefroy is technical manager at CIBSE