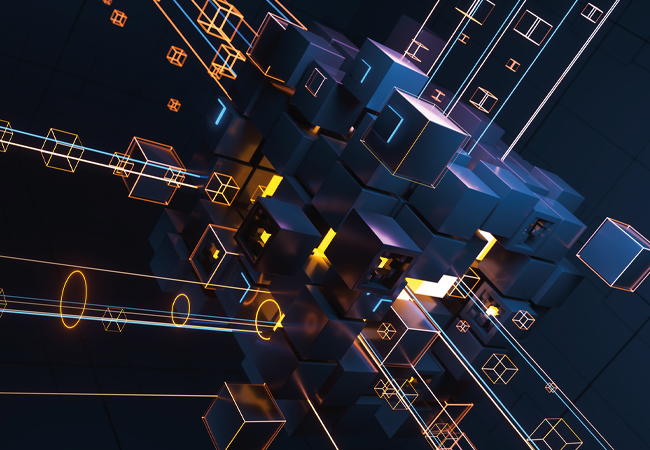 Digital technology is forging ahead in various aspects of the built environment. Drones are used to map sites, digital models are creating virtual environments before the first ground is even broken, and data analytics is shaping how we design buildings for the future.

Each new technology or iteration presents vast data opportunities, so how can we ensure a secure and accessible platform by which to collate this digital revolution? The solution lies in a system known as blockchain-paired currencies.

Blockchain is a shared digital ledger that records transactions. It enables the tracking and trading of virtually anything of value, as well as storing transaction-related data. As new entries are made onto this digital ledger, a number of transactions are grouped together and become known as blocks. Newly formed blocks are then chained to older ones – hence the term blockchain.

Blockchain has been transformative in the financial sector, but it lacks the same presence in the built environment. Its implementation can bring positive developments, however, to enhance the already rapidly developing digital mediums in this sector. Some of the changes it can bring are in building information modelling (BIM), internet of things (IoT) devices, the circular economy, smart contracts, and energy microgrids.

With the increasing use of BIM, blockchain presents opportunities to further accelerate the digital evolution in the built environment. Linking digital entities in BIM to their physical real-world counterparts through blockchain has more advantages over traditional radio frequency identification (RFID) tracking.

RFID tracking can, generally, do what is possible with blockchain, but the control of data is usually by a single part and not open. Blockchain does the opposite, tracking vastly more data publicly while providing a more secure tracking base.

With blockchain, a component’s life-cycle can be tracked from its manufacture to installation on site. This allows the precise measurement of quantities needed, preventing needless waste from overproduction. It also enables live progress tracking for project management, to minimise delays and plan efficiently.

Plus, with blockchain, each change to the project model can be recorded with corresponding data, such as time stamps and a party responsible for the change.

A good example of this is Bimchain.io – it implements accountability and incentive mechanisms in BIM workflows that, according to the company, ‘puts the BIM model at the centre of the contractual and legal process… making stakeholders legally bound to what they publish, and limiting their liability’.

It increases project efficiencies by boosting trust and transparency in the collaboration process. Bimchain has already been used on bridge projects in France.

As renewable energy production becomes more prevalent, there are scenarios where this production goes unused, known as curtailment. This can be directed back to the Grid, but what if the surplus could be sold to other nearby consumers? Energy microgrids linked with blockchain would be a good solution to this.

Microgrids work as localised distribution networks for electricity, used by producers and consumers. Linking this to blockchain can open opportunities for local producers to allow spot purchases of their electricity production by nearby consumers.

For example, Brooklyn Microgrid, by LO3 Energy, is a network of New York City residents and business owners who support local solar energy production. The participants can sell excess solar energy on the mobile app marketplace and people can choose to buy local solar energy credits.

After its trial phase, more than 300 local households and businesses expressed interest in the full launch, and there were already 50 generation locations, primarily using solar. Not only does it support the local economy, but it incentivises people to optimise loads for times when solar production is high, making full use of green energy and reducing emissions. A system such as this can work brilliantly in denser spaces, such as large retail centres or central districts. 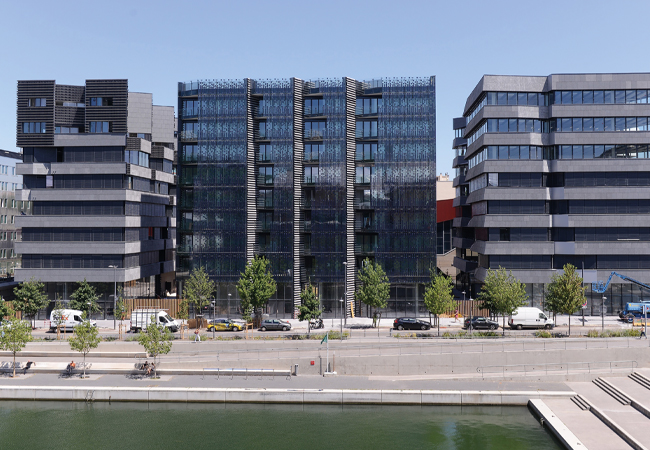 The introduction of microgrids will also work well in the EU’s Positive Energy Blocks (PEBs) project. A PEB is a mix of local developments that collate energy use to be net producers of energy. One of the best-known implementations of this initiative is Hikari, in Lyon, France, a 12,300m2 mixed-use development containing apartments, shops and offices. It has local generation through solar and geothermal to provide electricity, heating and cooling. Through the use of energy optimisation and concise planning, the Hikari PEB achieved a net positive generation of 2kWh.m-2 per year in the first 18 months of activity.

Using blockchain-linked microgrids in such PEBs encourages better optimisation of energy use, provides the opportunity for consumers to use local renewable production, and incentivises investments in generation such as solar.

As the importance of sustainability and environmental impacts grows, the circular economy is becoming increasingly prominent. The main premise of the circular economy is to prevent the one-time-only use of products. It encourages the recycling and reuse of materials and products, from production, manufacturing, and post-initial consumption. For the circular economy to function efficiently, there needs to be a platform for all parties involved to access relevant data through the internet. Linking blockchain to materials or products allows reliable, effective and transparent tracking of the entity throughout its life-cycle.

Engineers can view data related to the life-cycle of a product, and have better information about a building’s life-cycle analysis, carbon footprint, and use of newly obtained raw materials.

The concept of buildings as material banks (BAMB) is a circular one. The BAMB project, funded by the European Union, emphasises this, and instead of materials used in buildings being directed as waste after its life-cycle, BAMB encourages reuse of these resources. This reduction in waste leads to fewer virgin resources being used, lowering the environmental costs and, in the current situation, alleviating risks of resource scarcity.

Having blockchain as a base platform enables BAMB to function properly. Material lifespans can be viewed to see how long something has been in operation; its production source can be looked at to see the ethics of its manufacture, and previous refurbishments examined to gauge its integrity and physical condition – plus an array of other data.

The IoT and blockchain

The IoT generally refers to the network of devices that can connect to a wider network, such as the internet, and exchange data. With IoT devices becoming popular, they can allow significant performance enhancements in the built environment, from smart buildings to city-wide infrastructure management.

On a smaller scale, IoT devices integrated with blockchain can enable things such as a fixed track record of parts or systems in the building. Blockchain data can be viewed by relevant parties, and may contain data on the expected remaining operation lifespan of components.

On a larger scale, IoT and blockchain can transform the way we interact and manage city infrastructures. Transportation, water resources, energy and residents can all benefit from IoT. Commuters can pay for public transportation with smart devices rather than with cards or cash; and public infrastructure can be maintained or newly built with fully transparent data for anyone to look at, ensuring no misused funds. There are many uses of blockchain and IoT that can assist towards an evolving digital future.

Nokia delved into this sector by launching the Nokia Data Marketplace in 2021. This sets out to provide a blockchain framework to enable secure and trusted exchanges of data.

According to Nokia, the data marketplace has been used with Equinix data centres to allow organisations to securely share data and algorithms globally at more than 240 locations. This provided insight that even large data producers and consumers, such as artificial intelligence or machine-learning devices, can use blockchain.

While blockchain may be nascent in the construction industry, it clearly has many applications, with some pioneering companies already taking advantage of the technology.

If you have seen examples of blockchain in building services, please let CIBSE Journal know at editor@cibsejournal.com