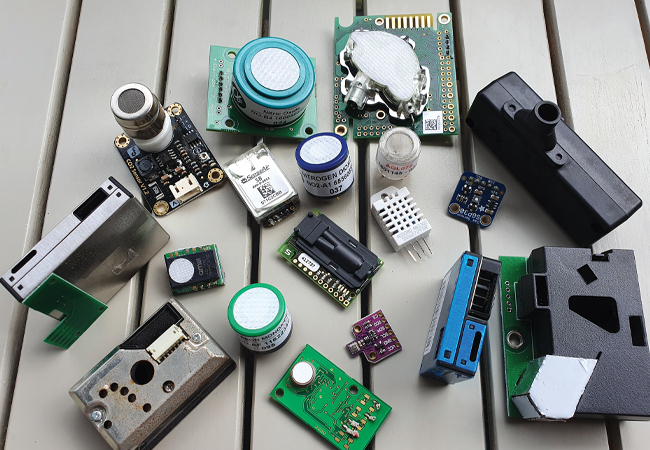 Manufacturers often say they can baseline sensors remotely, but this is nonsensical when the monitor is in an uncontrolled environment

Specifying and maintaining monitors requires research and astute questioning. Observed variation in output between sensing elements used by manufacturers is frequently seen, and can be significant. This may require standards such as Reset and Well to consider how this can be addressed.

In this article, we refer to an air quality ‘monitor’ as a packaged product sold by a manufacturer and ‘sensors’ as the discrete sensing devices within monitors.

Air quality monitors offer a fantastic and relatively cheap way of continuously monitoring, in one unit, a large range of parameters, such as: carbon dioxide; carbon monoxide; volatile organic compounds (VOCs); particulate pollution size ranges, such as PM1, PM2.5 and PM10; and parameters that require more complex sensors and systems, such as ozone and nitrogen dioxide. 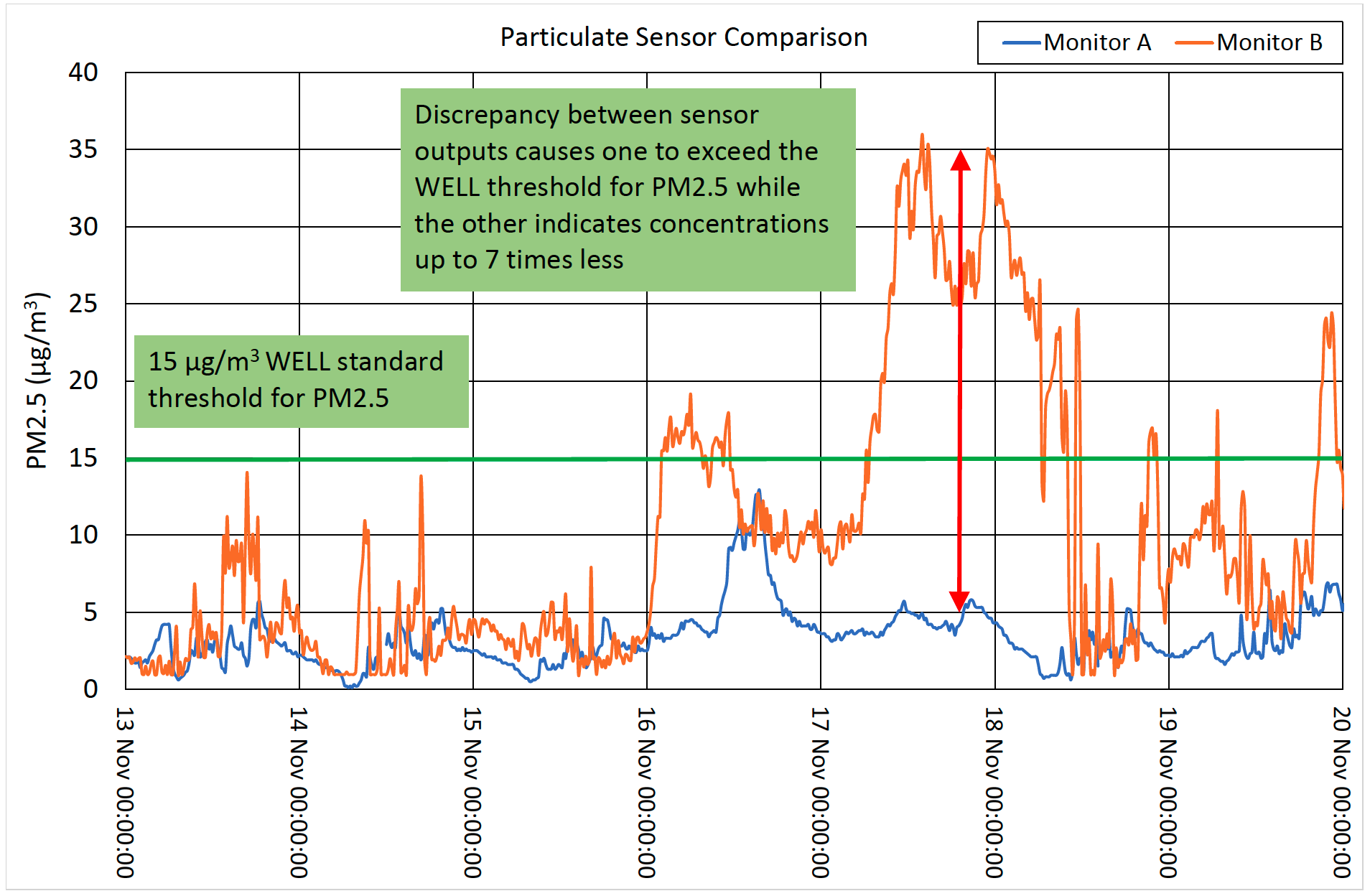 A few years ago, this range of parameters would have, typically, required a large number of discrete handheld devices, with someone taking readings throughout a building over the course of a day. It was hit and miss as to whether your building had a good or a bad air quality day.

A search on the internet for ‘air quality monitor’ brings up a plethora of results, many with their own scales categorising what conditions are ‘good’ and ‘bad’, which makes it impossible to compare data from manufacturer A with that from manufacturer B.

Enter the Reset standard, which takes a more scientific approach, defining guidance on accuracy, calibration and deployment methodology. At the time of writing, Reset maintains a list of 17 air quality monitors on its website that have been tested to meet its Grade B standard for commercial-grade monitors.

The Reset Air Test Procedure for Accredited Monitors v2.0 test procedure, to certify monitors as being compliant with Grade B, is an involved process requiring laboratory conditions.

The Well standard does not have an accredited list of monitors. However, Well and Reset aligned in 2018, so monitors that meet the more stringent Reset requirements are suitable for use on Well-standard projects. Note that continuous monitoring does not remove the need for onsite performance tests for Well certification.

Set up and maintenance

Monitors are certainly not fit and forget, and require maintenance, and sensors will drift over time. Well and Reset both state that monitors or discrete sensors should be calibrated or replaced annually, with calibration certification supplied. A sensible approach is to select monitors that allow calibrated sensor-module replacement.

Unfortunately, many manufacturers construct their products with no user-replaceable parts, such as sensor heads or modules that have a finite life. This means the only option is to dispose of the whole device at the end of its useful life and buy new, or send it back to the manufacturer for refurbishment or replacement. Facilities managers and specifiers need to consider this during procurement.

When asked, manufacturers of monitors will often state that they can baseline sensors and adjust for drift remotely, but this is generally nonsensical when the monitor in question is in an uncontrolled customer environment of unknown pollution concentration.

Our tests of new Reset Grade B-certified monitors from different manufacturers, alongside each other in an office environment, showed differences in the measured values for VOCs and particulates, most probably because of different sensors or correction algorithms. In the PM2.5 example (Figure 1), one sensor shows the space meeting Well requirements and the other shows non-compliance. 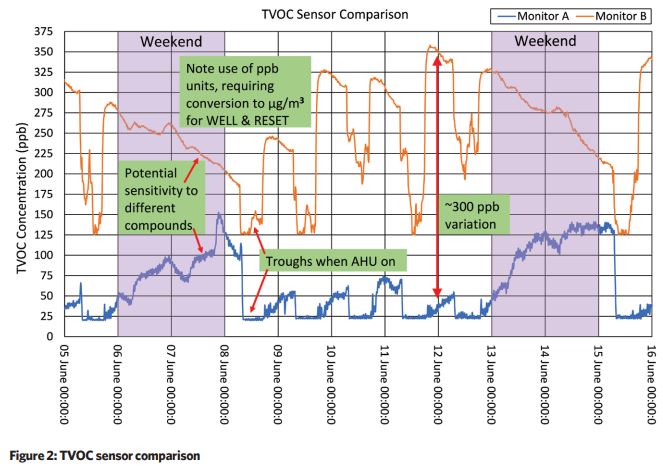 Similarly, the TVOC example (Figure 2) shows troughs for both monitors when air handling units are on. However, there is an obvious issue with variation in sensitivity or minimum detection capability, as a 300 parts per billion (ppb) difference is seen at times. Weekend trends show VOCs increasing for monitor A, but decreasing for monitor B, suggesting sensitivity to different compounds.

This approach can be appropriate for many applications, but does not work in environments that are occupied 24/7, where sensors can calibrate to a false high and read low.

Be wary of the accuracy of products offering parameters other than carbon dioxide, TVOCs and particulates in a small package

Volatile organic compounds are difficult to measure accurately, because VOC sensors are sensitive to a wide range of compounds, such as formaldehyde in flat-pack furniture and limonene in oranges or some cleaning products. For this reason, they are often called Total VOC (TVOC) sensors.

Sensors are typically calibrated to give a response factor of one to isobutylene or ethanol because the molecular weight of these compounds is a middle ground between toxic VOCs.

Units given are μg/m3 or parts per billion, but the two are not easily converted. Two identical sensors that have been baselined together can show if one space has higher concentrations, but you should think of readings as a reference, not an accurate measurement. VOC speciation and accurate measurement requires air sampling and lab measurement. TVOC sensors, such as the Sensirion SGP-30 or Bosch BME680, often employ metal oxide semiconductor technology in miniaturised format. Sensors often require baselining in a clean environment before use. 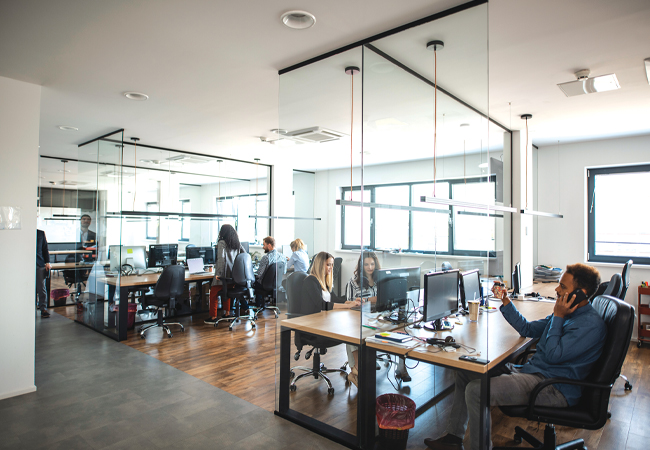 Particulate sensors typically employ optical technology to measure the amount of light obstructed by airborne particulate, usually providing PM2.5 and PM10 data, with some providing PM1 and PM4 categorisation. Consideration should be given to sensors that are fan aspirated, such as those by Alphasense, HoneyWell, Plantower and Sensirion. However, different models have been shown to have variation in output.