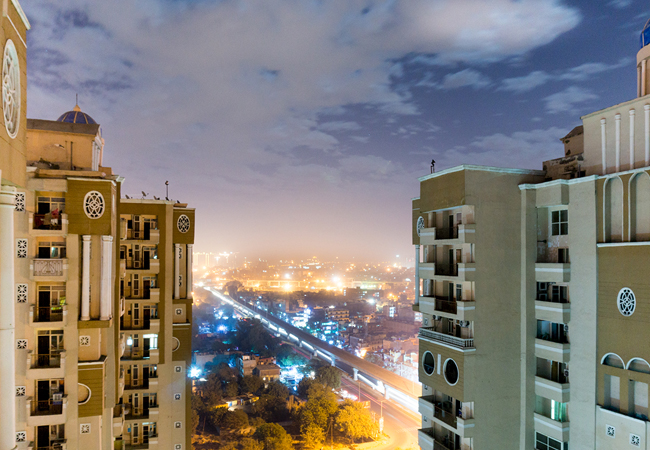 India has the third-largest economy in the world and is growing rapidly: its energy consumption has almost doubled since 2000. Buildings in India currently account for 41% of the country’s final energy consumption, and there is great potential for continued rapid growth and urbanisation – key drivers for energy trends.

The Indian Green Building Council claims India has the second-largest registered green building footprint, with more than 437 million m2 and around 4,363 projects registered for green building ratings (as of November 2017). In common with many countries, however, this movement lacks an important link: ensuring that the design intent of such buildings is actually realised.

Focusing on the experience and understanding of academic experts (as they are likely to be the lead disseminators of any BPE method) – as well as of industry professionals (architects, engineers and policy-makers) – they looked at the drivers and barriers for implementing BPE-based methods and, particularly, their incorporation into educational curricula.

This revealed that a key challenge to the adoption of BPE is a lack of trained people to teach it. In addition, India’s building industry – compared with those of many other countries – has less documentation of design decisions, more freedom during construction, fewer tested and certified products, less formalised building operation, and limited access to the costly equipment required for performance evaluation.

The I-BPE framework consists of the methods and potential delivery routes for its adoption in education, research and industry. The methods used for performance evaluation of buildings in India were compared, by the researchers, with those commonly used for BPE studies internationally. With input from experts in India, this helped to prioritise methods and indicate which ones may be relevant.

The I-BPE framework (as in Table 1) includes five ‘need to know’ elements covering technical and non-technical aspects of building performance. These are:

Each of the study elements adopts a graduated approach, from Level 1 to 4. Level 1 is the basic method to implement the BPE element and higher levels are added for deeper investigation. This means the I-BPE framework can be readily customised for different buildings, depending on the availability of data and resources.

For example, Level 1 methods alone could be applied to buildings where little information is available about the design intent or actual performance, or where there is limited access. Levels 3 and 4, however, could be deployed in buildings that are more ‘data rich’, with information from automatic meter recording, energy models, and good access to the buildings and occupants. This flexibility is considered important in encouraging market adoption.

Methods such as in situ U value testing, co-heating tests and air-pressure testing have been excluded, as buildings in India are not primarily being designed to rigorous airtightness standards – and it is neither easy nor cheap to access heat flux sensors.

While the I-BPE framework is not significantly different from those used in other countries, the approach is refined through the expert survey and the case-study work. The initial case-study application – the first of several – was intended to test the BPE methods on the ground. 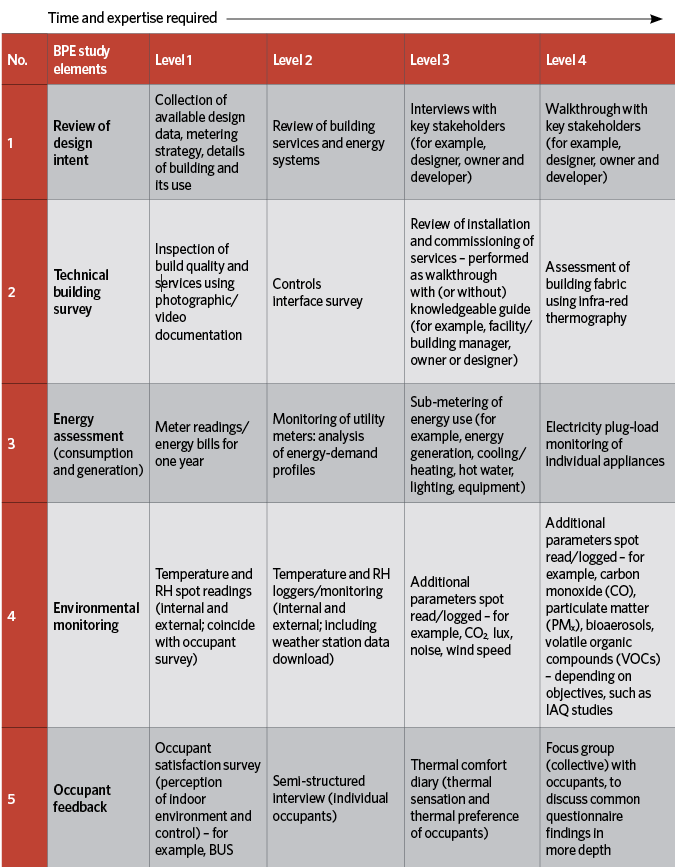 Case-study testing of the I-BPE framework

The five BPE study elements were applied to a real case study ‘green’ building in Jaipur. The graduated approach was used to select suitable methods for evaluating the performance of the building, in line with the availability of the design documentation, the two-week duration of the field study, and access to the building and occupants.

For example, the technical building survey study was carried out through all four levels, covering building services and building fabric testing, but the study elements on ‘review of design intent’, ‘energy assessment’ and ‘occupant feedback’ were implemented through two levels each. ‘Environmental monitoring’ was conducted through Levels 1-3, covering spot measurements and the logging of environmental variables.

Though the case study building could be considered data poor – which is typical of buildings inside and outside India – manual meter readings and access to bills allowed for a basic assessment of energy performance and, in turn, a comparison of the building’s green target versus its actual annual consumption.

The review of design documentation showed that the expected performance goals for the case study building  – set by the green rating systems – were primarily focused on asset performance, covering building geometry and system performance, and did not directly address the operational aspects, such as setpoints, mode of operation (mixed mode) and occupancy schedules. 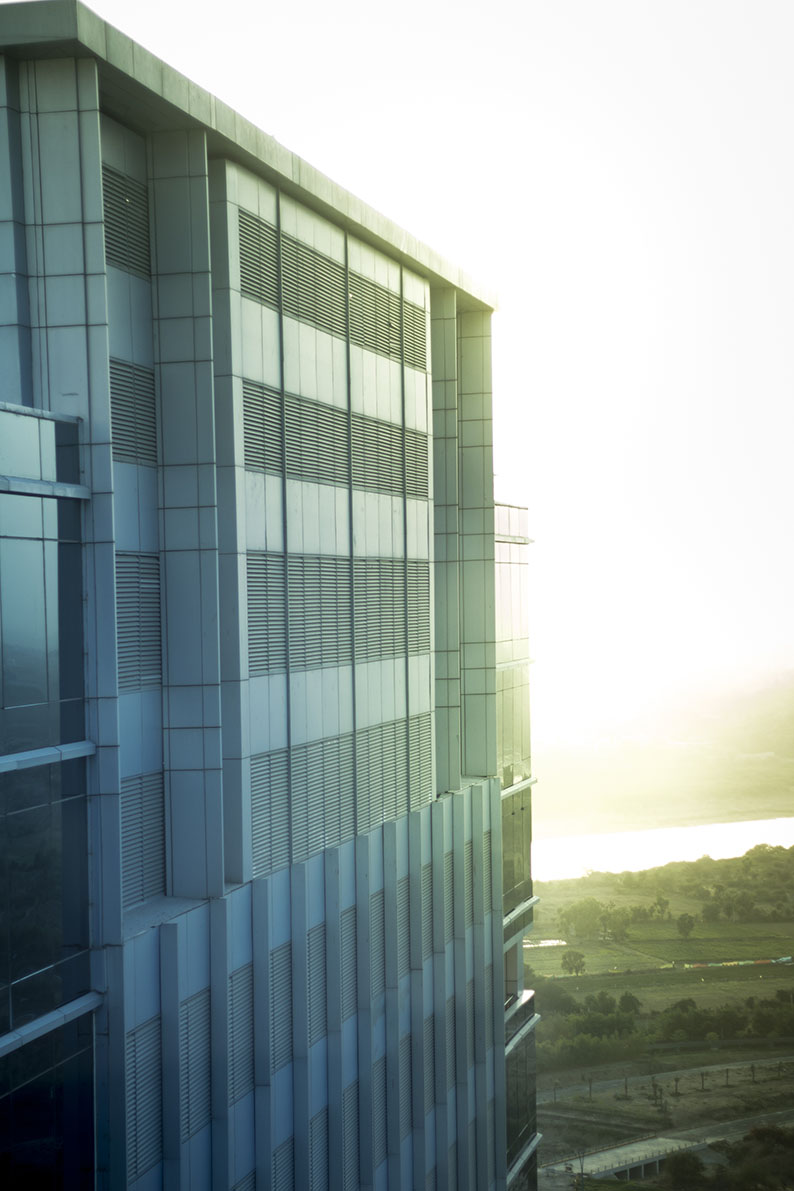 The energy performance index of the case study building was measured at 26.5 kWh·m-2 per year, while the annual solar electricity generation was 3% higher than the requirement for a Leed Platinum rating, probably offering a buffer for future loss in building system efficiency. Monitored spaces were found to be thermally comfortable, while most spaces had acceptable noise levels and met the code requirements for lighting; there was 82% occupant satisfaction with the overall lighting.

Fan and lighting controls were perceived to be well designed and easily accessible, but the control interface survey showed that lecture rooms and offices did not have access to thermostat control, which affected the local management of the thermal environment.

Overall, 79% of occupants felt that the design met their needs, supported by the continuous engagement of the facilities management (FM) team in controlling the operation of the building to meet the design targets.

To improve performance, output from the I-BPE recommendations included the introduction of a properly commissioned building management system to give the FM team real-time environmental and energy data, provide local thermostat controls, and optimise the use of blinds to increase daylight in the building.

Although the case study is not radically different from other buildings that might be studied in India or elsewhere, this I-BPE investigation – together with others – will help develop the methods further. (See panel, ‘Key to successful BPEs’.)

The research concludes that policy, such as energy codes, and market transformation – such as increased employment of ‘green’ rating systems – will be needed for a BPE to succeed in any meaningful application. Further support will be required through a national policy framework that supports, enables and incentivises the study of real performance of buildings.

This mirrors the experiences in other global marketplaces where the outcomes of BPE studies may not naturally filter through to policy-makers. Although the context is different from many other international BPE tools, the challenges appear to be fundamentally the same.

Development of the I-BPE methods and the case study highlighted factors that determine a successful BPE:

■ Ensure adequate design documentation is available, including expected energy performance targets – and, where possible, calibrated energy models – with which to compare actual performance.

■ As most Indian buildings are mixed mode (air conditioning is limited to extreme conditions), studies must consider naturally ventilated and air-conditioned modes to assess building performance as the outdoor conditions change.

■ To properly understand the case study building systems, multiple walkthroughs and meetings with the FM team are required. The monitoring plan must be flexible and account for FM team feedback.

■ Onsite data gathering about the operation and control of the energy systems – in the form of written notes, photographs or videos – give valuable context.

■ Green rating systems encourage sub-metering, but is not commonly used in green buildings in India, so structured walkthrough surveys and interviews with the building managers are essential.

■ Imported questionnaires, such as building use survey (BUS), require modification for climate and cultural considerations. It is vital to inform occupants about the purpose and relevance of the occupant survey in a pre-visit, to ensure a good response rate.

■ Researchers will need to wait while respondents complete the survey, to reassure them that the responses are important.

■ Occupants need strong encouragement to talk about their personal perception of the building, facilities and indoor environment.

■ A full copy of this research paper may be downloaded for free at bit.ly/CJJan19India 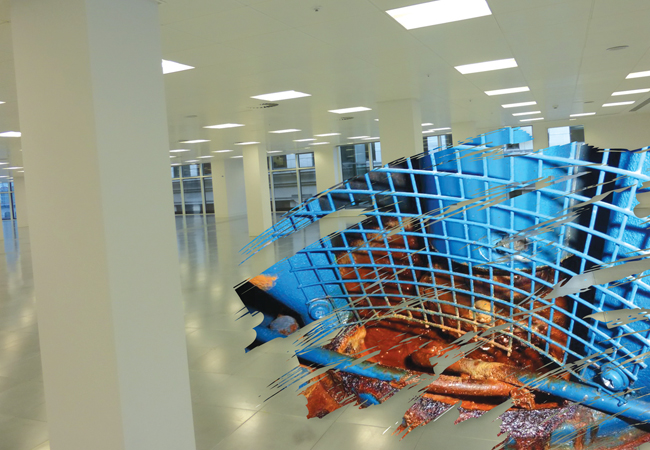 Technical due diligence in commercial property