This article is about something I believe is fundamental to every aspect of our lives, not just the built environment. It is about who collects, owns, controls and sells data that we perceive as being about us or our buildings; data that, quite reasonably, we think should belong to us.

It has taken a long time for the world of massive data collection to reach the construction industry, but – with the advent of the Internet of Things (IoT) – we can see it approaching. However, because construction is a little behind other areas of our lives, we have the opportunity to look at how the data industry works elsewhere and ask: ‘Is this going to be good for our buildings? How do we want this to work for us?’

Of course, there is great potential in collecting data. Improvements in performance and operation could be achieved as building equipment and sensors connect to the internet. 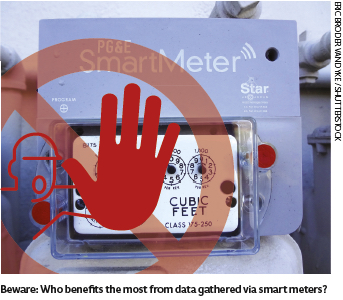 There are some big claims being made about the potential of  ‘smart buildings’ and learning more about your built assets by automated data collection is something I would recommend to any building owner. However, we have had this opportunity for a long time with modern building management systems; perhaps we just don’t have a good interface with the limited data that is being collected. This is why the potential for connected devices to push data to the internet – where it can be better analysed and visualised – is great, but we need to ask: ‘Is there a hidden trade off?’

Take smart devices. Whenever you download an app, you’ll see a long list of access types that you grant to the app. This list often increases when you are offered updates and bug fixes. If you look closely, these accesses often appear completely unconnected to the function of the app: for example, access to your photos or text messages. This is because the business model involves collecting as much information as possible and then using it or selling it to anyone who will pay for it. By clicking ‘I agree’ you give whoever makes the app – and probably third-party affiliates – permission to do so.

It is worth thinking about this in the context of buildings and the devices we are being offered. If you don’t, this could affect your built environment. What would you do if you arrived home to find the terms and conditions of your thermostat had been changed, and that you couldn’t control the heating without agreeing to give it access to your Facebook friends or your text messages.

So if using a smart device means we’re already agreeing to these intrusive data-gathering policies whenever we download an app, what do we get in return? Is it enough to receive a better interface with the data – and will we even get that? Do we need the expertise of the ‘big data’ crunchers in order to benefit from what is being collected?

It is information collected over groups of buildings – which won’t be available to the individual owners – that has real financial value to the gatherer. If you get access to a trickle of data, your bills may be reduced by a small amount; but the device provider gets access to analyse data from hundreds of buildings, and to sell this on or use it to speculate in the marketplace. Who has the better deal?

During an NBS roundtable I participated in, the government’s chief construction adviser, Paul Morrell, was asked who owns the model. His response was categorical: ‘The client.’ Of course, he was talking about BIM, but I would argue that collected, in-use data is part of that model – probably a much more important part than the skeletal geometry that a BIM provides.

If the terms and conditions to which you have to agree to use smart devices and sensors means you must grant a licence to collect data – including data outside of the device, but within the building’s network of other devices – do you really own the model? If you are not in control of your data, it seems pretty obvious that you don’t. I’d go further and say, where the data collected is from public buildings – it should not pass into the sole ownership of private companies.

I am not saying we shouldn’t collect data, but we need to ensure that free, permanent access to our building data is retained in a format that means we can change data providers. In my mind, the BIM protocols need a section on data gathering, to protect owners. After all, one of the BIM task group’s stated aims is that no building data should be lost again. If it is contractually locked up in a private company’s system, it is lost.