In the early hours of 10 May 2016, for the first time since the 1882, no coal was burnt to generate electricity in the UK. This was not only a symbolic achievement, but it highlighted a significant shift in the way electricity is now being generated. In 2012, the average carbon intensity of the National Grid was 531g CO2/kWh, with coal delivering on average 43% of electricity. This dropped to 391g CO2/kWh in 2015 (25% coal) and for the first five months of 2016 has dropped to 318g CO2/kWh (12% coal). 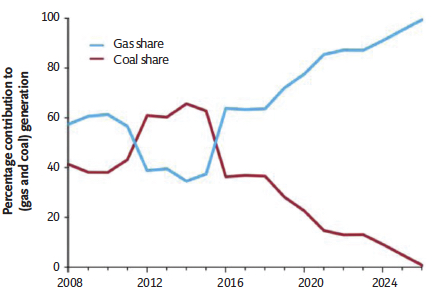 April 2016 witnessed the shutting down of a number of major coal generation plants as a result of electricity generation from coal being unviable, and May 2016 saw more energy being generated from solar PV than from coal. This seemingly permanent move is not only good news for delivering the UK’s carbon reduction targets, but also has very profound impacts on the relative carbon intensities of heating systems that heat our homes and buildings.

The government has committed to no coal being burnt by 2023 and DECC’s projections (November 2015) are that the carbon intensity of the grid will continue to fall to below 250g CO2e/kWh by 2020, and then continue on a downward path to 165g CO2e/kWh in 2025, 110g CO2e/kWh in 2030 and 65g CO2e/kWh in 2035. Given that heating systems being designed today will mostly spend their operating lives in a time with UK grid intensities below 240g CO2/kWh – the carbon intensity of heat delivered from a 91% efficient natural gas boiler – this has a fundamental impact on how we should design, heat and manage energy in our homes and buildings. [Note: Emissions intensity projections are in kg CO2e/kWh, which include other greenhouse gas emissions, whereas Building Regulations uses kg CO2/kWh. Consistent use of kg CO2e/kWh would amplify the impacts shown in the example in Figure 3.] 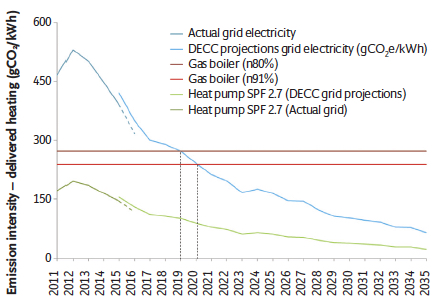 Building Regulations – and consequently most policy relating to energy in homes and buildings in the UK – still use carbon factors identified in 2012 for determining the carbon emissions of homes and buildings. For most fuels this is acceptable, as they do not change much, but not for grid electricity with a current figure of 519g CO2/kWh in SAP2012 – based on incorrect 2012 projections for grid carbon intensity across 2013-15. If derived now for an updated SAP2016, the figure would be just 288g CO2/kWh (2017-19 projected average).

A grid carbon intensity of 288g CO2/kWh has very significant impacts when considering heating systems options; on a recent project this changed the ranking of lowest carbon solutions significantly:

As you can see from the example in Figure 3, gas CHP district heating moves from lowest carbon on 2012 emissions to highest carbon of the options considered with 2016 carbon emissions factors. Also local gas boilers become higher carbon than electric storage heaters from around 2020.

This also has significant impacts for retrofit programmes. For example, many electric storage heating systems are being replaced with local gas boilers (or gas district heating), which over the next 12 years will increase emissions by 28% and not deliver the 52% emissions savings projected by SAP 2012.

This has profound impacts on upcoming programmes such as the new Energy Company Obligation, which should bring more than £3bn of funding to retrofit from 2017-22. 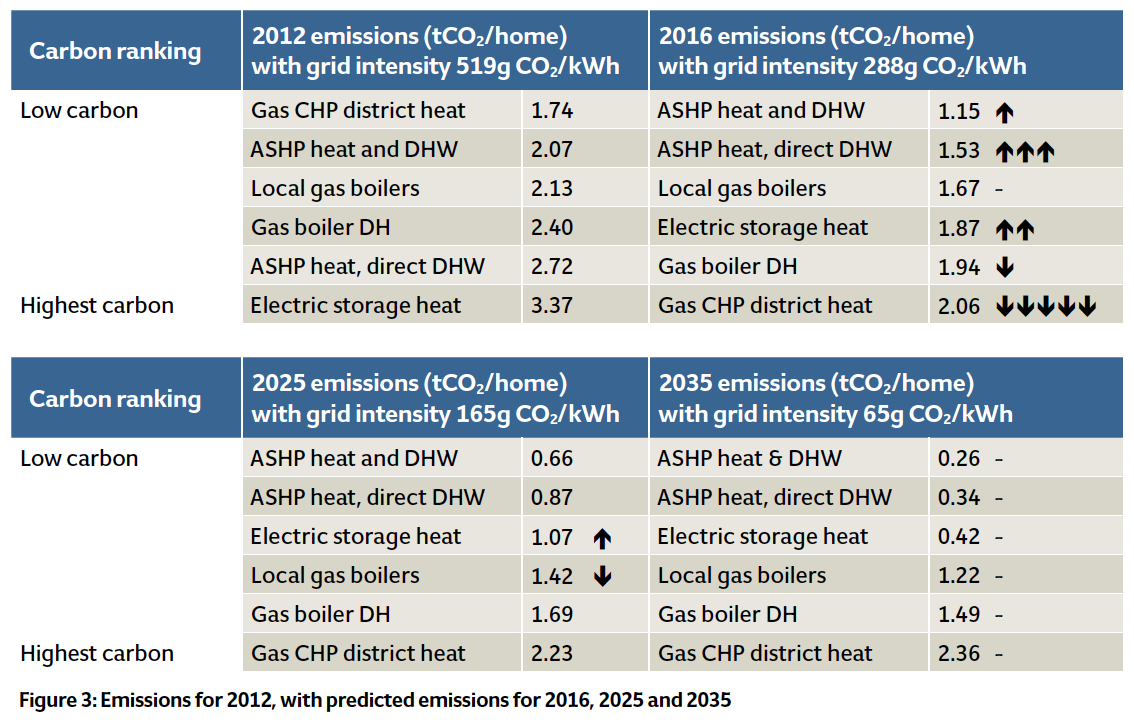 However, the current Ofgem consultation proposed the use of SAP2012 carbon factors, which in some circumstances could mean significantly increased emissions, when the programme is claiming to deliver significant carbon emission reductions.

The conclusion I have drawn is that – unless natural gas decarbonises very rapidly, which seems very unlikely – a National Grid with a lot less coal means we need heating without gas.

In the UK, I believe we will move to a largely zero carbon electrically powered, electrically heated and electrically transported future – the question is, how quickly? The faster we get there, the better our chances of averting catastrophic climate change…