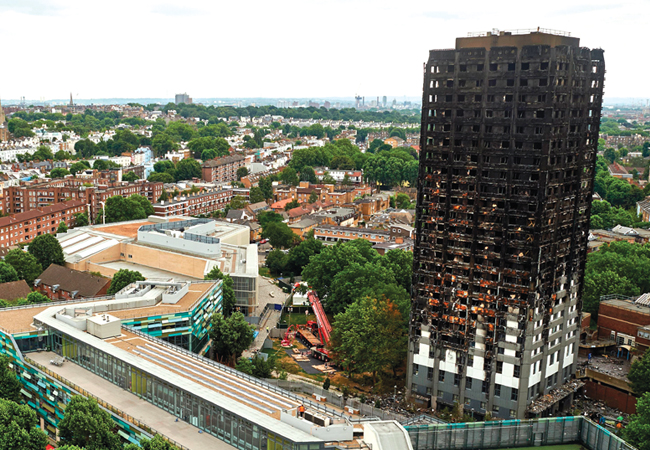 A report for the Metropolitan Police that was leaked to the press pins the blame for all of the 71 deaths in the Grenfell Tower fire on poor standard refurbishment work.

The report, by BRE Global, said the fire should not have spread beyond the flat where it started and would not have taken any lives if the tower’s original façade had not been over-clad between 2014 and 2016.

Five clear breaches of the Building Regulations are alleged in the report, including: poorly installed cavity barriers; spaces in window frames filled with materials – such as rubberised membrane, uPVC lightweight panels, and even paper – that provided fuel for the fire rather than resistance; the use of combustible insulation and aluminum composite materials; and missing door closers. These weaknesses undermined the fire-protection strategy for the building and allowed flames to spread up the outside and then penetrate into other flats. The cavity barriers were too small in many places, which created a chimney effect on the exterior, according to the report.

The lack of door closers contributed to smoke filling the stairwells as occupants tried to escape. In addition, the report points out that the building should have had a wet riser main to help the fire crews, rather than a dry riser.

According to the report, which was leaked to the Evening Standard, it was the combination of factors – rather than individual failings – that led to the 71 deaths.